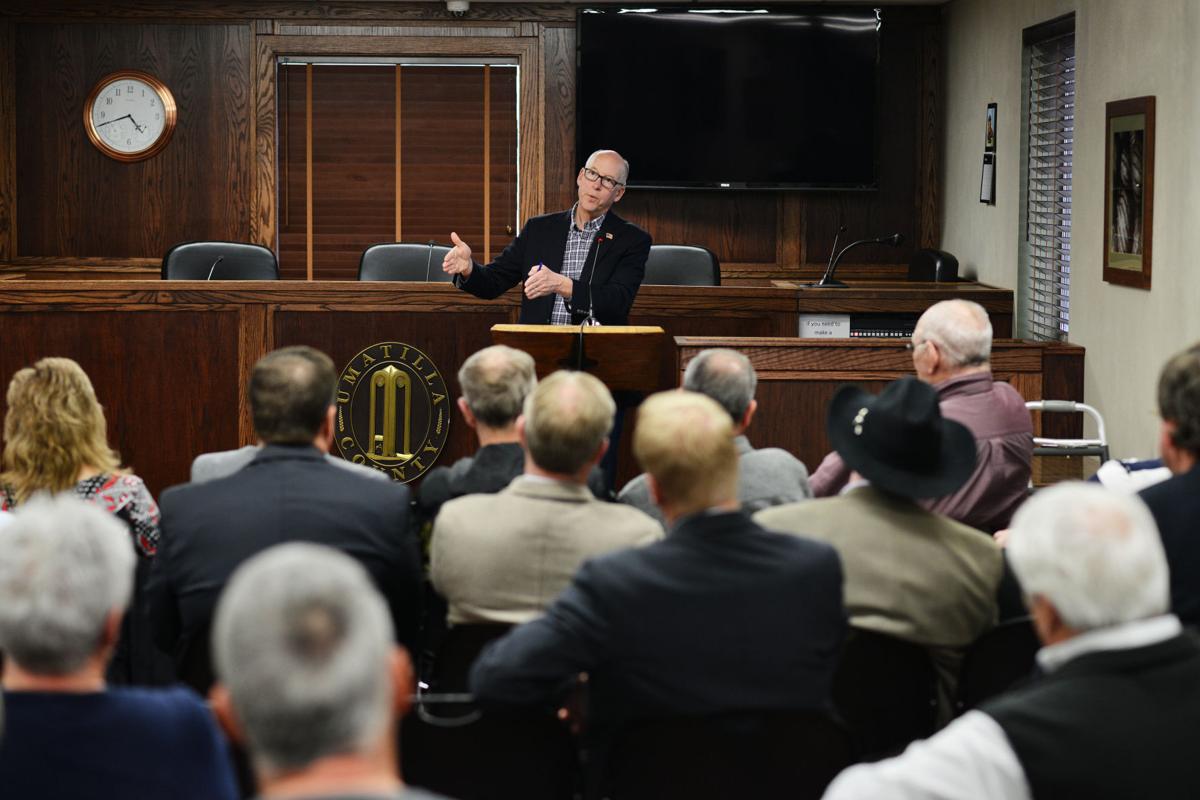 Rep. Greg Walden answers questions from a group of Eastern Oregon county commissioners during an unpublicized meeting at the Umatilla County Courthouse on March 28, 2018 in Pendleton. 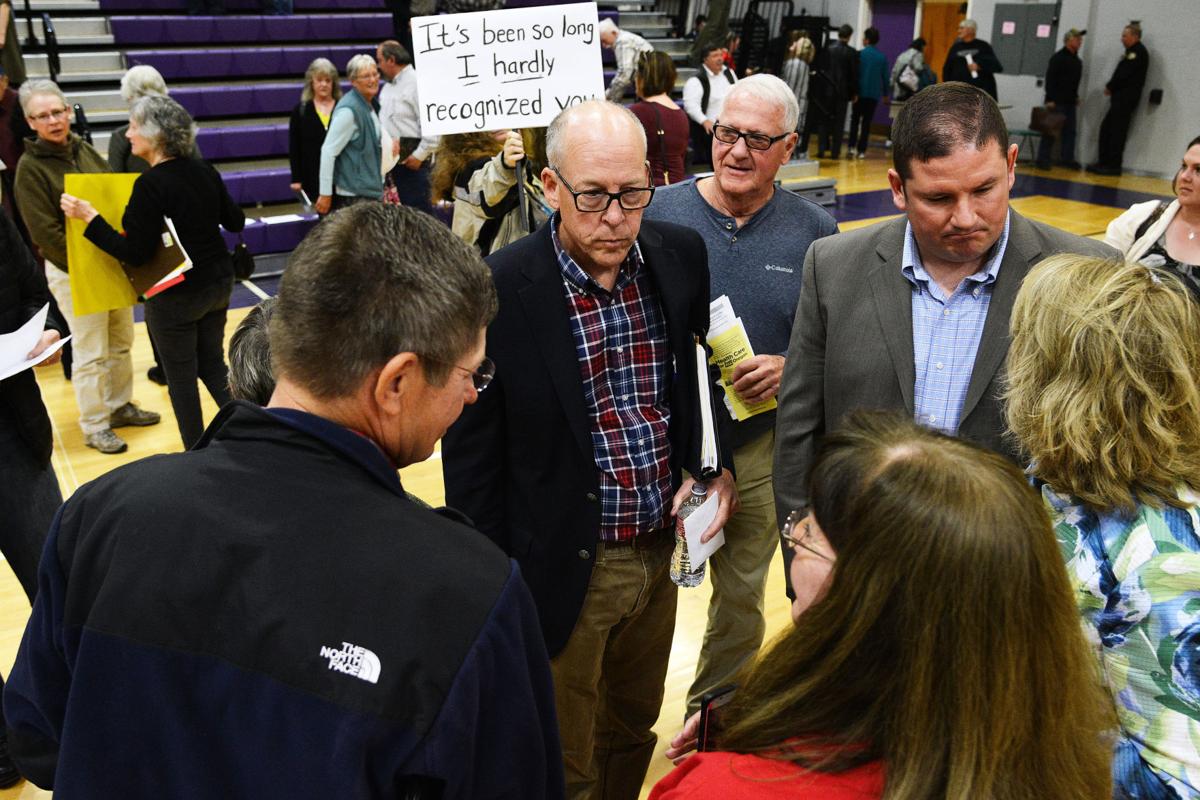 Rep. Greg Walden answers questions from a group of Eastern Oregon county commissioners during an unpublicized meeting at the Umatilla County Courthouse on March 28, 2018 in Pendleton.

Rep. Greg Walden was in Hermiston on Thursday, but most residents were likely unaware.

Oregon’s lone Republican Congressman gave an update to the local Rotary Club on legislation he was working on and took questions from club members before heading to another event in The Dalles. Such semi-private, under-the-radar appearances have become a popular line of attack for his critics.

The activist group Indivisible even held a “Where’s Walden?” caravan in late August, holding rallies across the district. A news release claimed the campaign marked 500 days since Walden had last held a town hall meeting in his district.

Walden acknowledges it’s been a while since he has held a more traditional town hall, but points to four “telephone town halls” open to the public that he has held so far this year. He said during his most recent one earlier this month, 16,458 people called in, including Umatilla County residents.

He also said his office has responded to 128,500 constituent phone calls, emails and other communications this year and he has covered 8,791 miles in the district while holding smaller forums and focus groups, which Walden said encourage people to speak more freely about their personal experiences with sensitive topics like opioid addiction or human trafficking.

“From Facebook to telephone to email, people have more access to their representatives than ever before,” he said.

During his last tour of in-person town halls in spring 2017, media outlets reported Walden faced a hostile crowd in places like his hometown of Hood River, where people booed and jeered as he answered pointed questions about Republican attempts to repeal and replace the Affordable Care Act.

On Thursday, Walden said he values in-person town halls and has held many of them in his years representing District 2. But he said liberal activist groups had published playbooks to “weaponize” town halls and it became hard to hold meetings when people were shouting him down.

“People were bringing questions downloaded from the internet,” he said. “We would get the same questions every town hall.”

Indivisible’s guide to town halls, available on its website, suggests people write 10-15 questions together ahead of time that are “sharp and fact-based.” Participants should arrive early, spread out and look “friendly or neutral” so staff are willing to call on them, the guide advises. If staff ask for the microphone back after they have asked a question they should “politely but loudly” insist they are not finished if they don’t feel satisfied with the initial answer.

“Sit by yourself or in groups of two, and spread out throughout the room,” the website says. “This will help reinforce the impression of broad consensus.”

Bonnie New, organizer of the final stop of Indivisible’s “Where’s Walden?” caravan in Hood River, said Walden often “rambles on and on” when asked a question without ever answering the question, so she did not believe it was heckling for the person asking the question to push for a clear answer if they hadn’t gotten one.

She said people were “understandably angry” over attempts to repeal the Affordable Care Act when Walden last held a town hall in his hometown of Hood River.

“People did shout over him,” she said, “and I can understand his view that that does not enable dialog. But we had been trying to engage in dialog with him for a long time and he did not respond.”

Invite-only events like the small round-tables and Rotary Club meetings help keep events from being hijacked by a few vocal people, but they also restrict the number of constituents with which Walden has face-to-face interactions.

Barbara Ann Wright-Dunagan of Pendleton said she has become disenchanted with Walden after feeling that he has stopped caring about hearing from his constituents. She said she likes being able to talk to her elected officials at town halls and wishes Walden would start doing them again.

“I want someone in that office that cares,” she said.

Wright-Dunagan said she has listened to Walden talk about things like health care and tariffs in the media and felt he wouldn’t support those things if he understood how they were affecting regular people — the type who don’t necessarily get invitations to private roundtable meetings.

“Walden needs to talk to some of the rest of us that are in the trenches,” she said.

New has the same viewpoint.

Oregon Senators Ron Wyden and Jeff Merkley both have maps on their websites listing every town hall they have scheduled. Wyden’s list goes back to his election in 1996, while Merkley’s website lists town halls through 2015. Merkley held town halls in each county in 2015, 2016 and 2017, according to the schedule on his website, and wrapped up his 2018 public tour of all the counties with a July 8 town hall in Boardman.

Wyden pledged when elected to hold a public town hall meeting in each county in Oregon at least once a year, and his website shows he has honored that schedule. Like Walden, he also faced anger on health care during past town halls — in his case when Tea Party activists in Republican-heavy counties were protesting the implementation of “Obamacare” in 2009.

Most of Oregon’s other representatives have held at least a few town hall meetings this year. Rep. Earl Blumenaur didn’t have any listed on his website for 2018, but Rep. Peter DeFazio’s website lists a schedule of 10 town hall meetings he held throughout his district in August. Rep. Suzanne Bonamici held six town halls in the spring and just announced a schedule of six more for the fall. Rep. Kurt Schrader lists five in-person town halls during 2018 and a telephone town hall in June.

At Thursday’s Rotary Club meeting, Walden spoke to local business owners and civic leaders seated at a handful of tables. He gave a rundown on some of his recent work, particularly as chairman of the Committee on Energy and Commerce, which has summoned the heads of Facebook and Twitter to testify and worked to protect the country’s power grid from attack. Walden said he is working on provisions in the farm bill that will help create better federal forest management to prevent wildfires, and is negotiating a major package of legislation to fight opioid addiction and overdoses. He said he supported re-classifying marijuana so that scientists can legally conduct important research on its medicinal benefits. He touted the strong economy, including a decades-low unemployment rate and record highs in the stock market, and the benefits regular Americans will see from the tax cuts Republicans passed.

When he opened the floor to questions, club members were polite but sometimes pointed with their questions. One person pointed out that the tax cuts Walden spoke of had raised the federal deficit — a deficit Walden had once told the group they should be worried about — and another said that suppliers for their business were having to raise prices because of tariffs implemented by the Trump administration.

Walden addressed tariffs by saying that tariffs can be a useful “club” to fight back in trade wars but he has let the White House know he believes the tariffs shouldn’t go on for too long.

“We’ve got trading issues here,” he said. “We need more and better agreements.”

Walden is usually in Eastern Oregon during the second week of September for the Pendleton Round-Up, but this year missed the Round-Up and Westward Ho! parade. He said important votes had been scheduled for the same day as the parade, and by the time those votes were canceled for Hurricane Florence he had already made commitments to a veterans group.

He has agreed to a 30-minute debate with challenger Jamie McLeod-Skinner moderated by NewsChannel 21 (KTVZ) of Bend on Oct. 5. Walden said he believes it will be an important opportunity to show constituents the views of both candidates, but McLeod-Skinner has criticized Walden for not agreeing to more debates in more public settings.