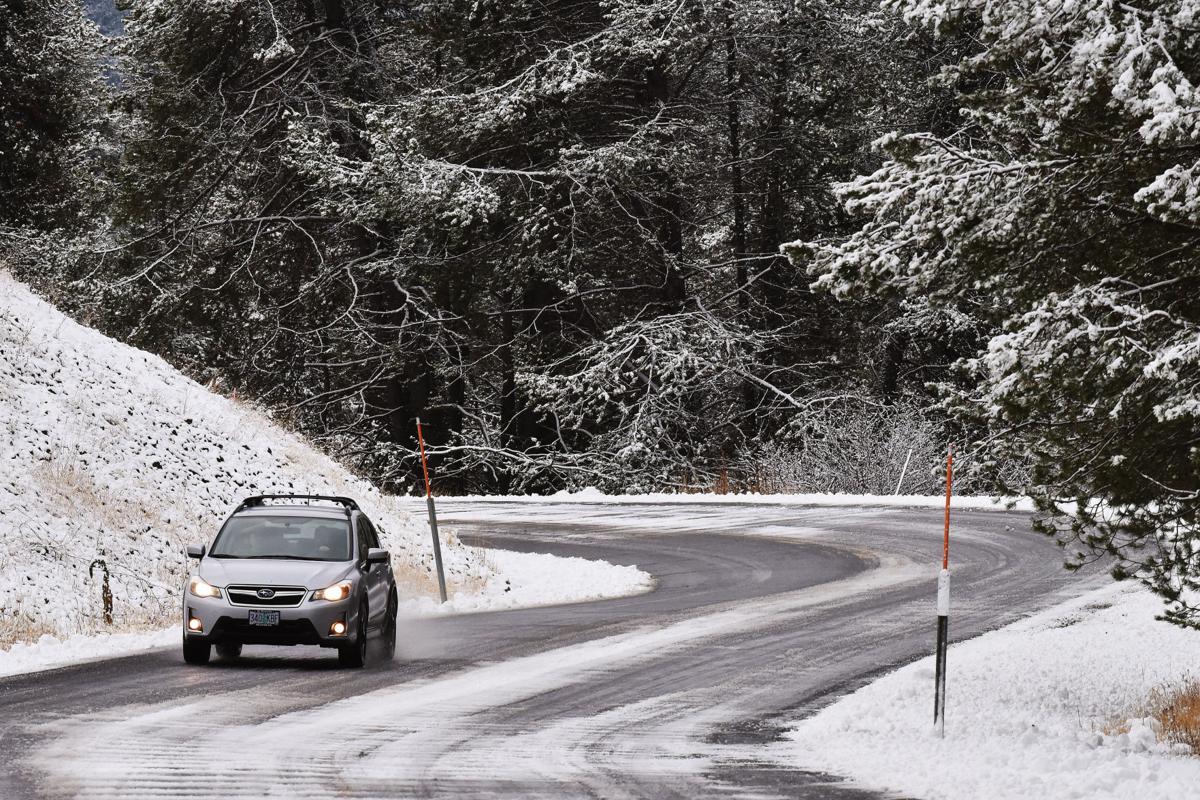 A vehicle navigates a partially snow-covered road on Old Highway 30 on Friday west of Meacham. 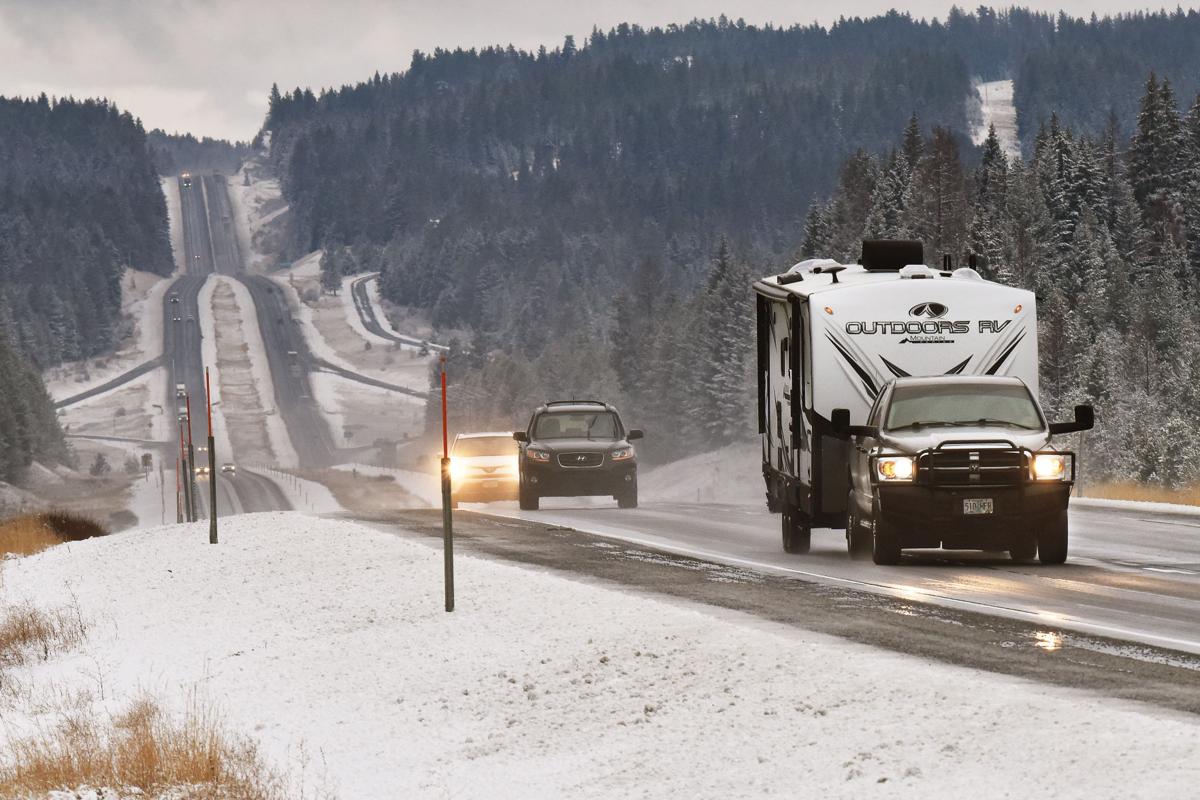 Traffic heads west bound on Interstate 84 after an early-morning storm dropped some snow in the Blue Mountains on Friday near Meacham.

A vehicle navigates a partially snow-covered road on Old Highway 30 on Friday west of Meacham.

Traffic heads west bound on Interstate 84 after an early-morning storm dropped some snow in the Blue Mountains on Friday near Meacham.

Every winter drivers are told to slow down and ease up on the brakes in slippery conditions, and every winter vehicles end up in a ditch anyway.

Some crashes are hard to prevent — evenly a slowly-moving car can sometimes slide out of control on ice — but following certain practices can greatly reduce the chance of a crash.

Steve Anderson teaches driver’s education classes to Hermiston High School students. Barring a freak snowstorm in July, students won’t get to practice driving on ice during the class, but they do have a unit in which they discuss safe driving in bad conditions.

Anderson said the first piece of advice would be to avoid driving on bad roads in the first place. If it’s important you do go out, slow and steady is the key. Intersections are problem spots, so gently slowing down well ahead of a red light will give it time to turn green.

“I tell them, don’t charge a red light. Just drive slowly and you’ll never have to stop at an intersection,” Anderson said.

He recommended not using the brakes on ice, but using the engine to slowly down-shift instead. Even in an automatic, taking your foot off the accelerator and down-shifting to second and then first gear can provide more control than hitting the brakes.

If students do begin to slide, he tells them to look toward a “target” they want the car to go toward and keep that in the center of their steering wheel.

“Ninety percent of the time your car goes where your head goes,” he said.

“It just means four wheels are spinning instead of two,” he said.

Gene Long, manager of Bert’s Auto Salvage & Towing in Hermiston, can attest to that. During the winter of 2016 the business responded to 22 rollover crashes in 24 hours and only one of the vehicles was not four-wheel drive. In that case, the crash had been caused by another vehicle that did have four-wheel drive.

“Just because you have four-wheel drive, you might be able to take off faster, but you’re not going to stop any faster,” he said.

Towing companies always see a big up-tick in business when the weather turns bad. To avoid having to call Bert’s or another towing company, Long said people need to leave the house earlier than they usually do so they don’t feel the need to rush. If there’s frost on your windshield, he said, expect frost on the road.

“You just have to use common sense,” he said.

Long said one thing that stands out to him is how unprepared some drivers are in a crash. He’s picked up people in flimsy pajamas and slippers who have been waiting in the cold for an hour. He recommended people keep an emergency blanket, snacks and water in their vehicle in case they go off the road somewhere remote. Dressing in proper footwear and a coat and making sure your phone is charged every time you leave the house in the winter will help you be prepared in the event something unexpected goes wrong.

“They call it an accident for a reason,” he said. “People don’t plan to get in one.”

In some cases, a crash will result in injuries. Even if there are no injuries, if your car slides off the road Long recommended calling law enforcement dispatch to let them know that the crash occurred but there are no injuries, so they that have that information when passerby are calling in reports of a car off the road and they have to decide whether to pull resources off another crash.

Jim Forquer, operations chief for Umatilla County Fire District 1, said when emergency vehicles are responding to the large number of crashes that occur every time roads are bad, it is important that drivers pay attention and get out of the way as quickly as possible to prevent a crash on the way to the crash.

Fire district staff are trained on how to drive on snowy or icy roads in an ambulance or fire truck, but that doesn’t make them immune to sliding if someone pulls out in front of them.

He said people can help themselves by not waiting until it snows to buy new tires or chains or put on their studded tires. Bald tires don’t do well on ice. Other maintenance problems, such as worn-out windshield wiper blades, can also cause problems in a storm.

High speeds on interstates and highways add extra risk to winter driving. The Oregon Department of Transportation works hard to use plows, salt and other methods to make the roads as safe as possible during the winter, but the department also put out a guide to winter driving in 2017 asking drivers to do their part.

Passing snow plows on the right has always been dangerous (and, on state highways, illegal), and with the more-efficient dual-wing snowplows being added to the fleet, passing on the left can be dangerous too. Snow being kicked up can obscure the plow blade that extends eight feet to the side of the cab, causing vehicles to hit it. That damages the driver’s vehicle, but also makes the roads less safe for everyone as the plow has to be pulled off duty for repairs.

“Drivers should give winter maintenance vehicles such as plows and sanders a wide berth,” the ODOT guide states. “They travel slowly but pull over periodically to let traffic pass. The best advice is to stay three car lengths behind and give yourself more time to get where you are going.”

In addition to common-sense guidelines such as slowing down, following at a safe distance, giving semi-trucks extra room, turning off cruise control, wearing a seatbelt and not driving distracted or drowsy, ODOT also recommends that people practice putting on chains before needing them, so that they can put them on quickly in an emergency.

They strongly discourage stopping on the side of the roadway, particularly in bad weather. If you must stop, pull over to the right as far as possible and turn and lock the steering wheel away from the roadway so that the vehicle is not pushed into traffic if struck from behind. Turn on safety flashers and use flares or reflective triangles, plus reflective clothing, if available. Anyone who doesn’t need to be outside the car should remain inside with their seatbelts on.

The department also advises proper use of lights. Turning on headlights during rain, snow, dusk or cloudy days helps other drivers — such as a semi-truck driver getting ready to change lanes — see your car more quickly. Fog lights are brighter and aimed low, which can help drivers see the lines on the road better in fog, but should be switched off when a vehicle is approaching from the opposite direction.