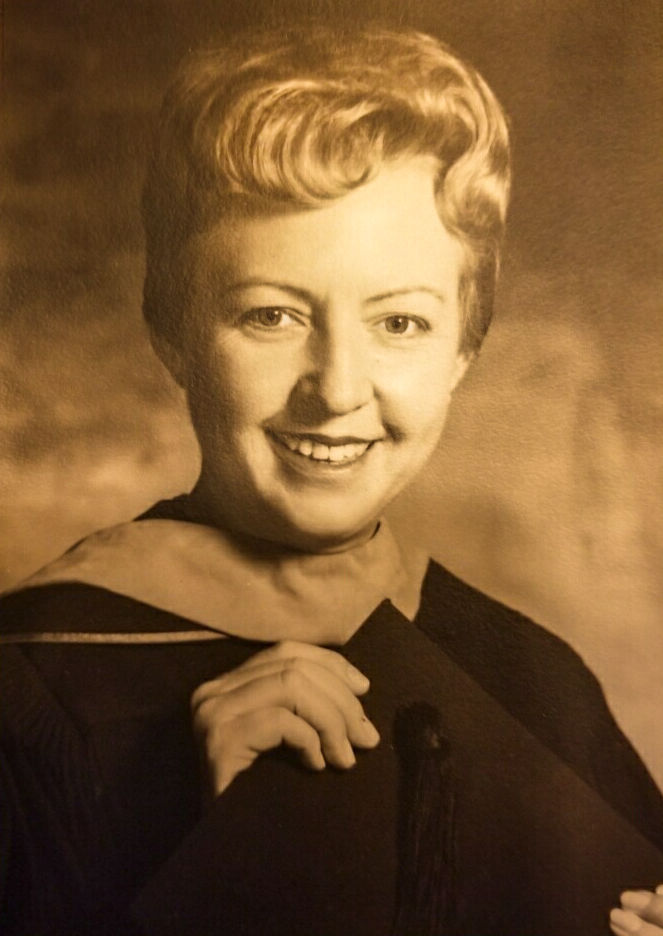 Elnora Baker poses after graduating from Eastern Oregon College before accepting a teaching job in the Helix School District. 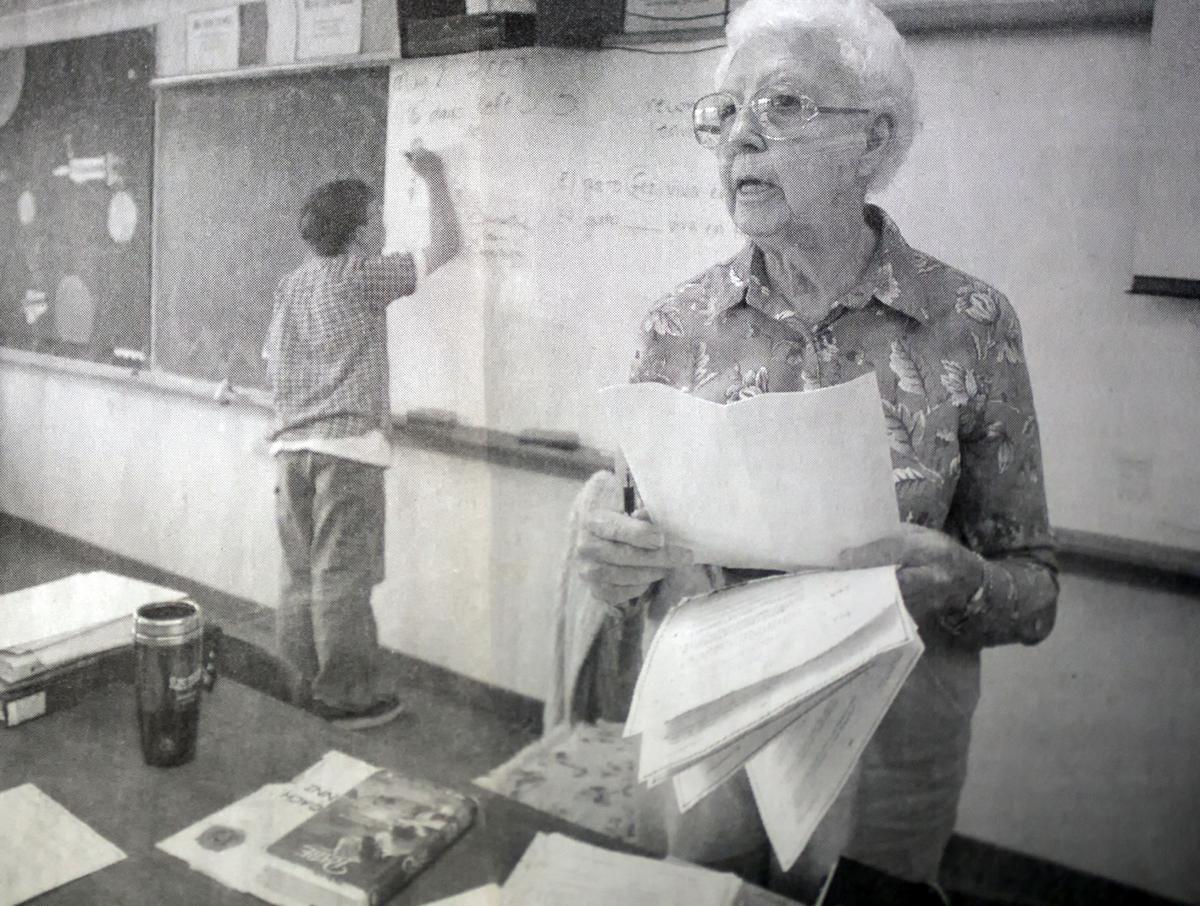 Elnora Baker teaches a class at the Helix school in 2007 at the age of 83. 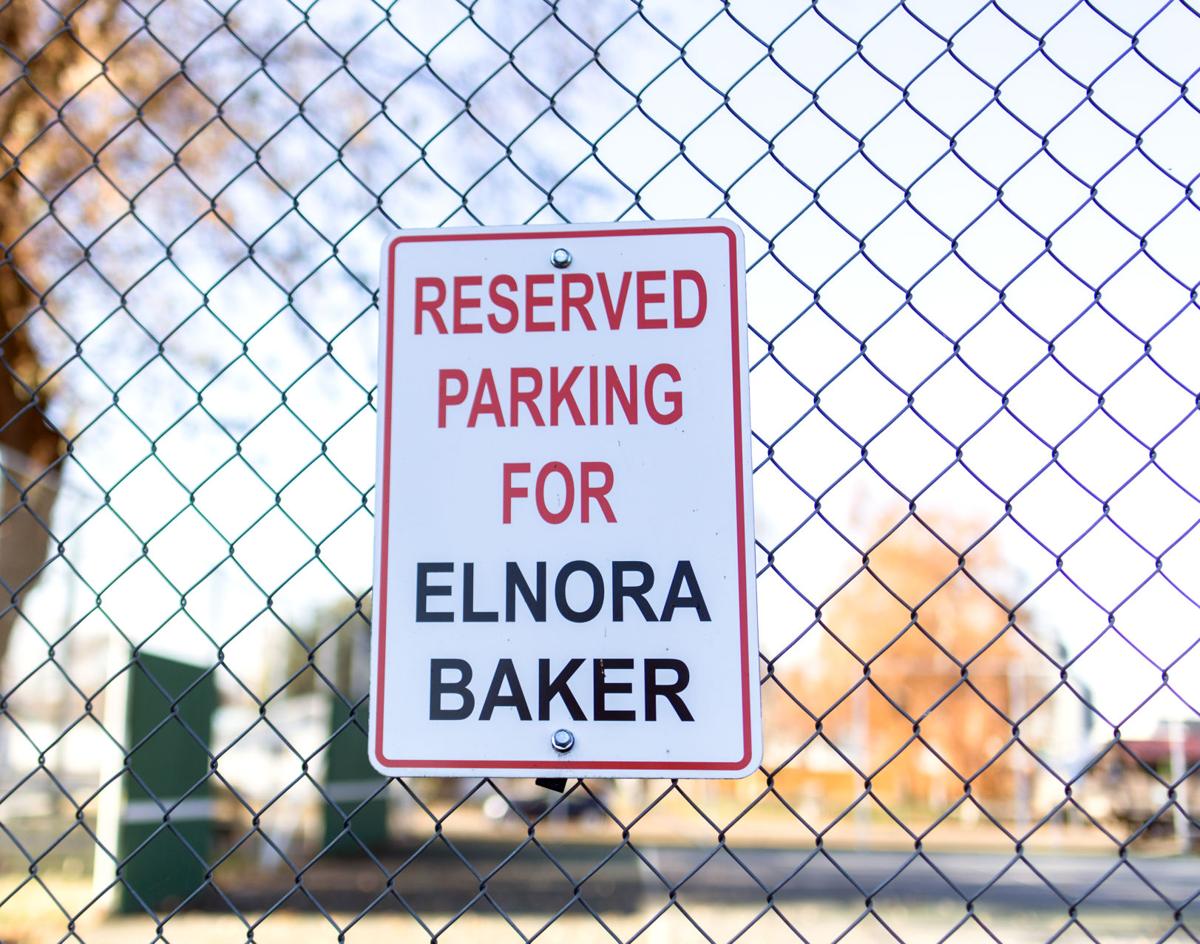 Several years ago, the Helix School District gave longtime Helix teacher and volunteer her own designated parking place close to the school building. On frigid winter days, Superintendent Darrick Cope sometimes went out and started Baker’s car for her. 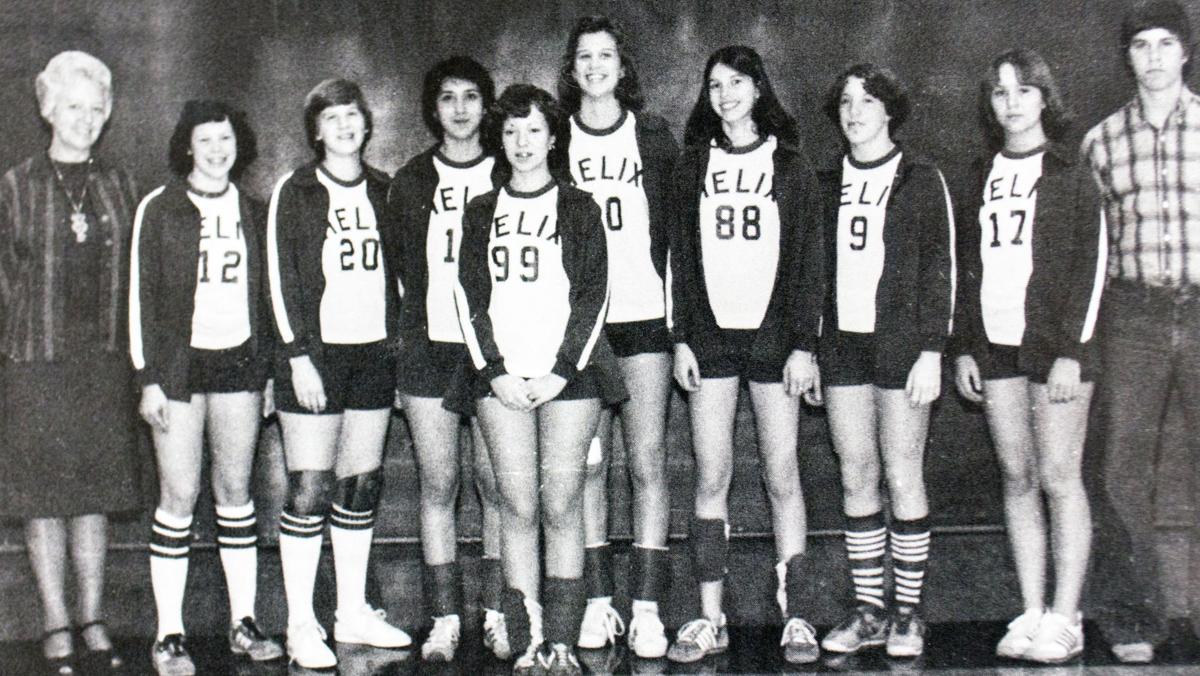 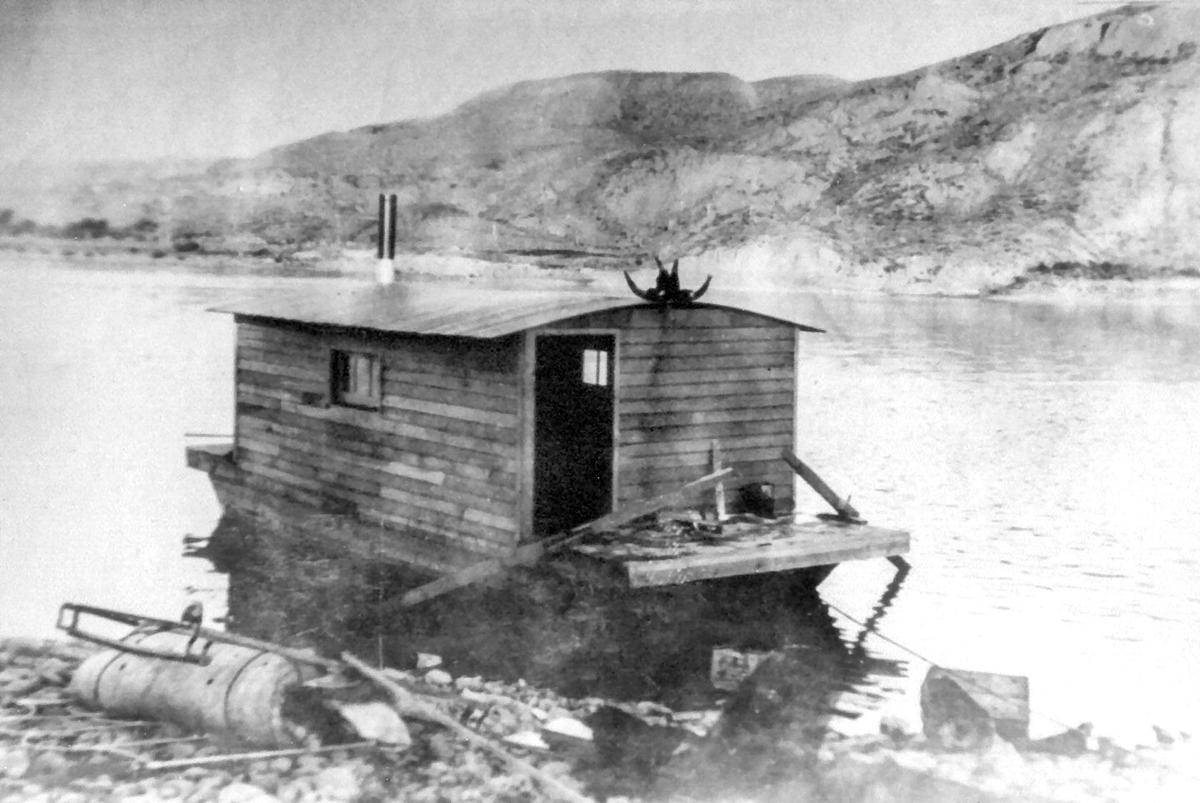 Elnora Baker was born on this houseboat on the Mississippi River near Memphis, Tenn. Her father often broadcast religious messages from the boat. 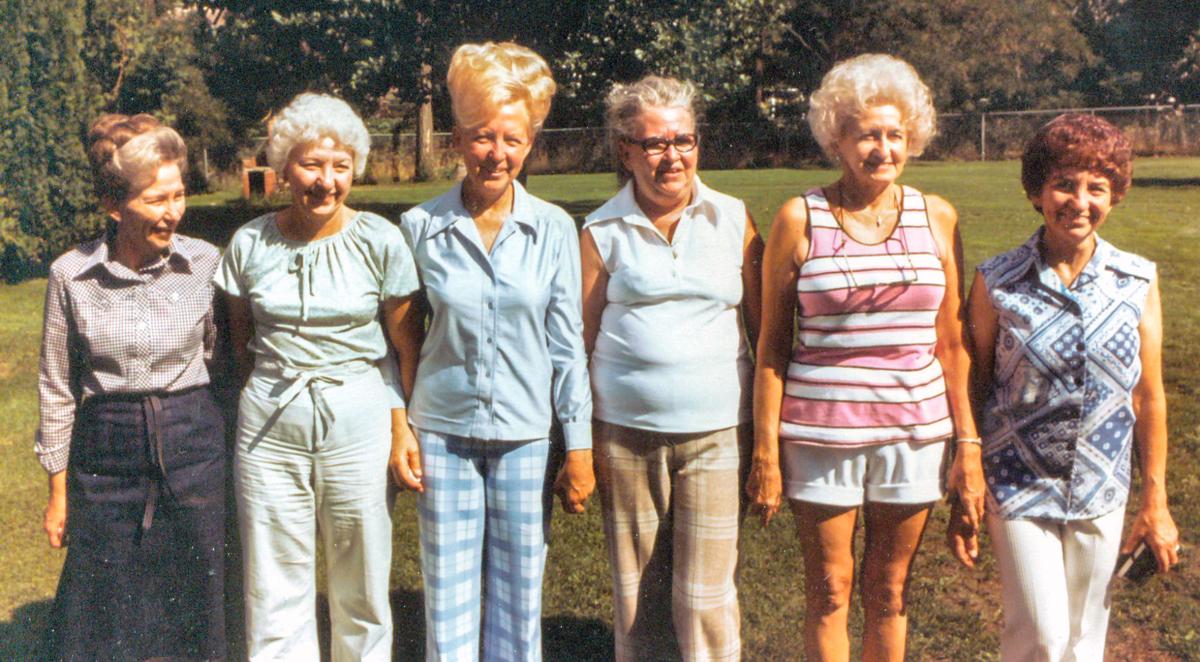 Elnora Baker (third from left) stands with her five sisters in this undated photo. 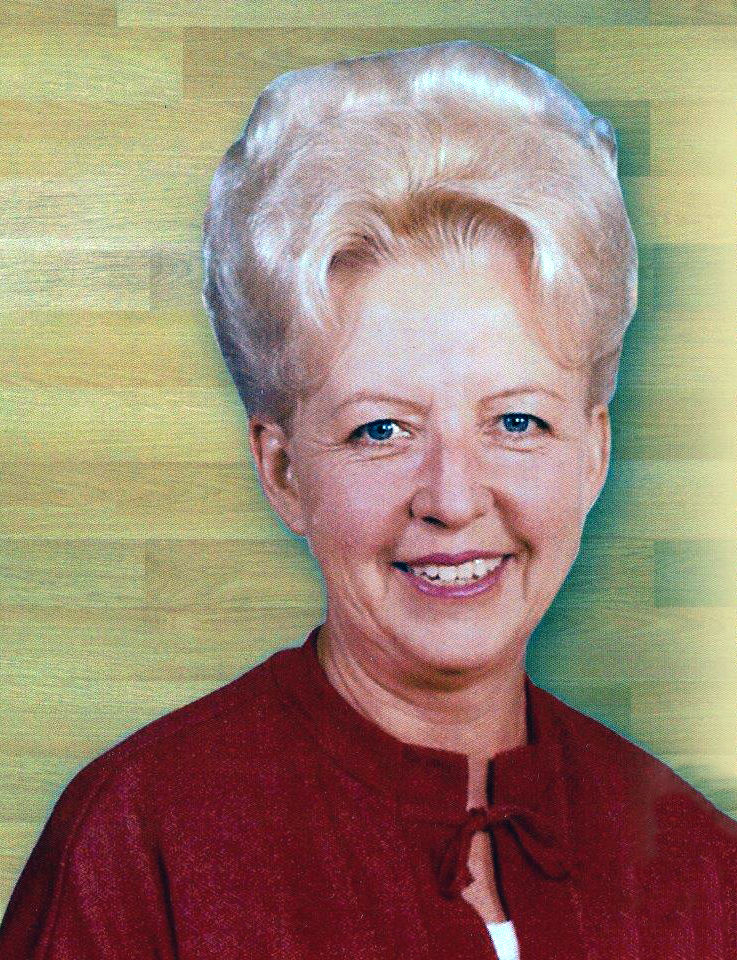 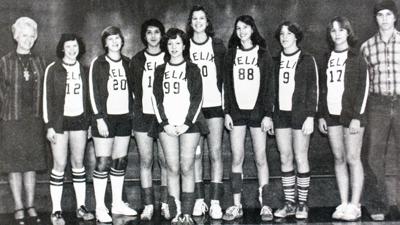 Elnora Baker poses after graduating from Eastern Oregon College before accepting a teaching job in the Helix School District.

HELIX — Heroes come in many forms.

Elnora Baker didn’t have a cape or the ability to see through walls. Instead, the longtime Helix School teacher’s superpowers included compassion, sass and the ability to tenderly convey to her students lessons of gratitude gleaned during a difficult childhood. Oh, and she made unforgettable fudge.

Baker, who died last week at age 95, taught in Helix for 23 years, retired, and then returned as a sub and volunteer for almost three decades more. Most teachers and students at the school have never known life without “Mrs. Baker.”

The local legend had a rough start. According to daughter Mary Faircloth and niece Diane McMillan, Baker knew what it was like to be dirt poor.

“She was born on a houseboat on the Mississippi River (near Memphis, Tennessee),” Faircloth said. “That’s why her middle name is Memphis.”

Faircloth described Baker’s father as a religious zealot who broadcast pious messages from the houseboat. After her parents split up, food was scarce. In a 2007 interview, Baker remembered living with her mother in a tent along the railroad tracks, gathering coal that fell off passing trains and collecting food at a garbage dump.

The six Jamison sisters were split up at one point. Baker and two other youngest daughters stayed with their mom, while the older girls were sent to their maternal grandmother in Walla Walla, Washington. The sisters reunited in Walla Walla when Baker was 12.

On the way there, the family (including her mom’s boyfriend) traveled through Texas in a jalopy, stopping multiple times to fix flat tires. Finally, as they sat on the side of the road unable to repair the tire again, a police officer showed up. He took the girls to the local jail, where the matron washed their clothes, gave them spaghetti and warm baths, then tucked them into bed. Baker treasured the memory. The officer returned the sisters to the car the next morning.

As an adult, Baker lost her first husband, Charles Loveland, in World War II. She met her second husband, Preston “Harry” Baker, in Weston, where he owned the Blue Mountain Cafe and Tavern. Since Harry was 20 years her senior, Faircloth said, Baker decided she needed to go back to school to secure her financial future. The high school dropout earned her GED, and then enrolled in Eastern Oregon College (now University) in La Grande.

“Every day, she drove her Volkswagen Beetle over Tollgate to get her bachelor’s and master’s degrees,” Faircloth said. At age 42, Baker first applied for a teaching job in Weston, but was turned down because she and Harry ran a tavern. Almost immediately, “Helix snatched her right up.”

Wayne Miller, who taught with Baker at the Helix middle school and is the current high school athletic director, said he is grateful.

“Weston wouldn’t have her and Helix benefitted,” Miller said. “We thanked them for that. They missed out on a great teacher.”

The new teacher with the beehive hairdo and the straight-shooting style became a fixture in Helix.

Over the years, Baker taught fifth, seventh and eighth grades and also coached the high school volleyball team from 1971-77, guiding the girls to two sixth-place finishes during a time when all the teams in the state were lumped into one classification.

She continued to live in Weston, driving back and forth daily. Her notoriously heavy foot sometimes got her into trouble. Superintendent Darrick Cope said the last time he saw her beat-up Hyundai Sonata, it had at least three visible dents. She had a collection of speeding tickets, too.

“She got her last speeding ticket going through Athena on her way to school,” McMillan said of her aunt. “She was going 85.”

Baker taught until 1989. Soon after, when former Griswold school secretary Janet Kilby’s multiple sclerosis worsened, Baker followed her to work each day to help her get out of the car and into her wheelchair. Finally, Baker figured since she was driving all the way to the school each day, she might as well stay. Some days she subbed for absent teachers and others she worked in the office filing and doing other tasks.

History teacher Lorin Kubishta often invited Baker to speak to his students about growing up during the Great Depression.

Kubishta marveled at Baker’s optimistic view of life despite her rough beginning.

“She’s one of the finest human beings I’ve ever met,” he said.

McMillan said her aunt somehow became a great person and wonderful parent to her two children despite the lack of a parental role model. She leaned on her faith in God.

“She had the resiliency to pick up and move on no matter what life gave her,” McMillan said.

During a 2007 interview, Baker thought back on her life and said she wouldn’t change anything.

“I have been the most blessed person,” she said. “God has been good to me. I wouldn’t give up one minute.”

One way Baker showed affection was with fudge.

“At Christmas, she’d bring 20 pounds of fudge and set it on the counter. There were four or five different kinds,” Cope said. “Former students still talk about Mrs. Baker’s fudge.”

Mrs. Baker continued coming to the school until near the end.

“I think she needed her daily kid fix,” Cope said. “She just kept coming. Sometimes she’d drive over here for 30 minutes, and then move on with her day.”

Faircloth said the community will say goodbye to Baker at a service set for 3 p.m., Nov. 17, at the Helix school. The interment of her body won’t happen until months later.

“She gave her body to science,” Faircloth said, “so she could keep on teaching.”

"She's one of the finest human beings I've ever met."