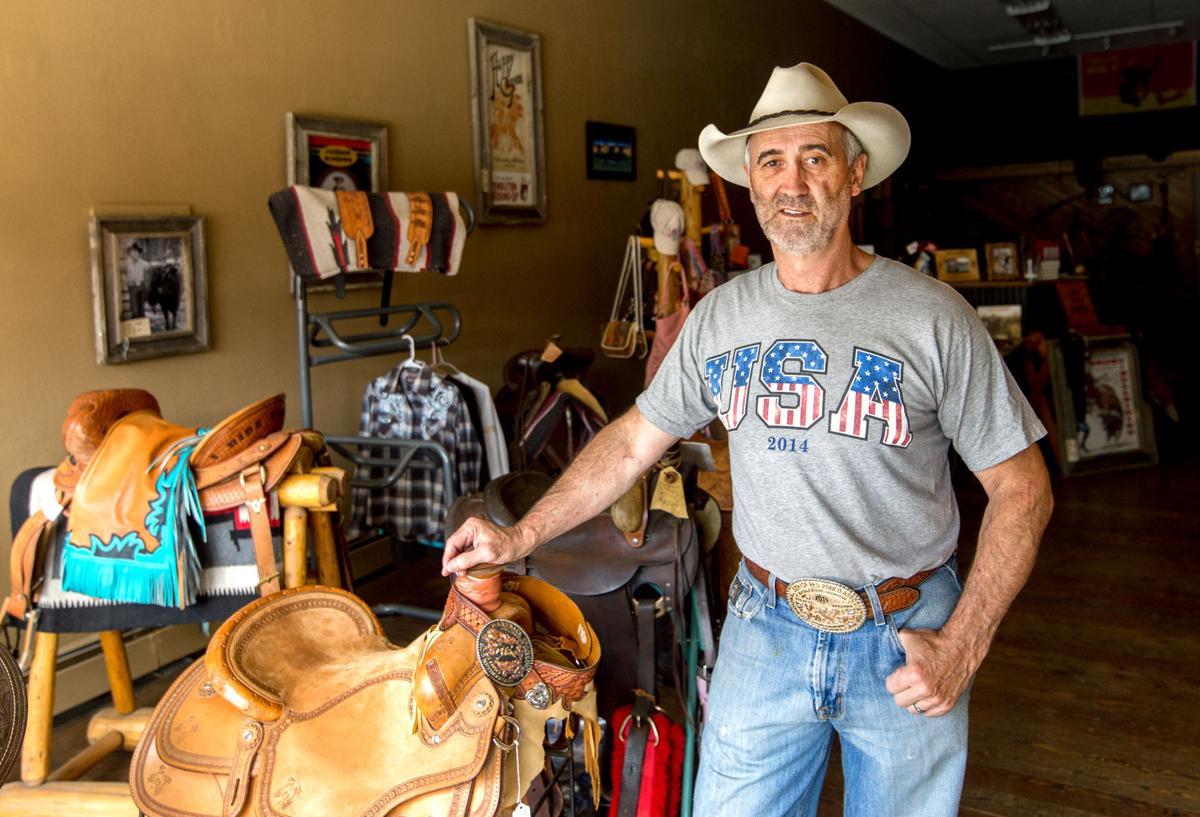 Pendleton saddlemaker Rod Retherford recently won a saddle bronc competition to honor his brother Rick, who died at age 17 in a rodeo. Retherford’s championship buckle includes the words “For Rick.” 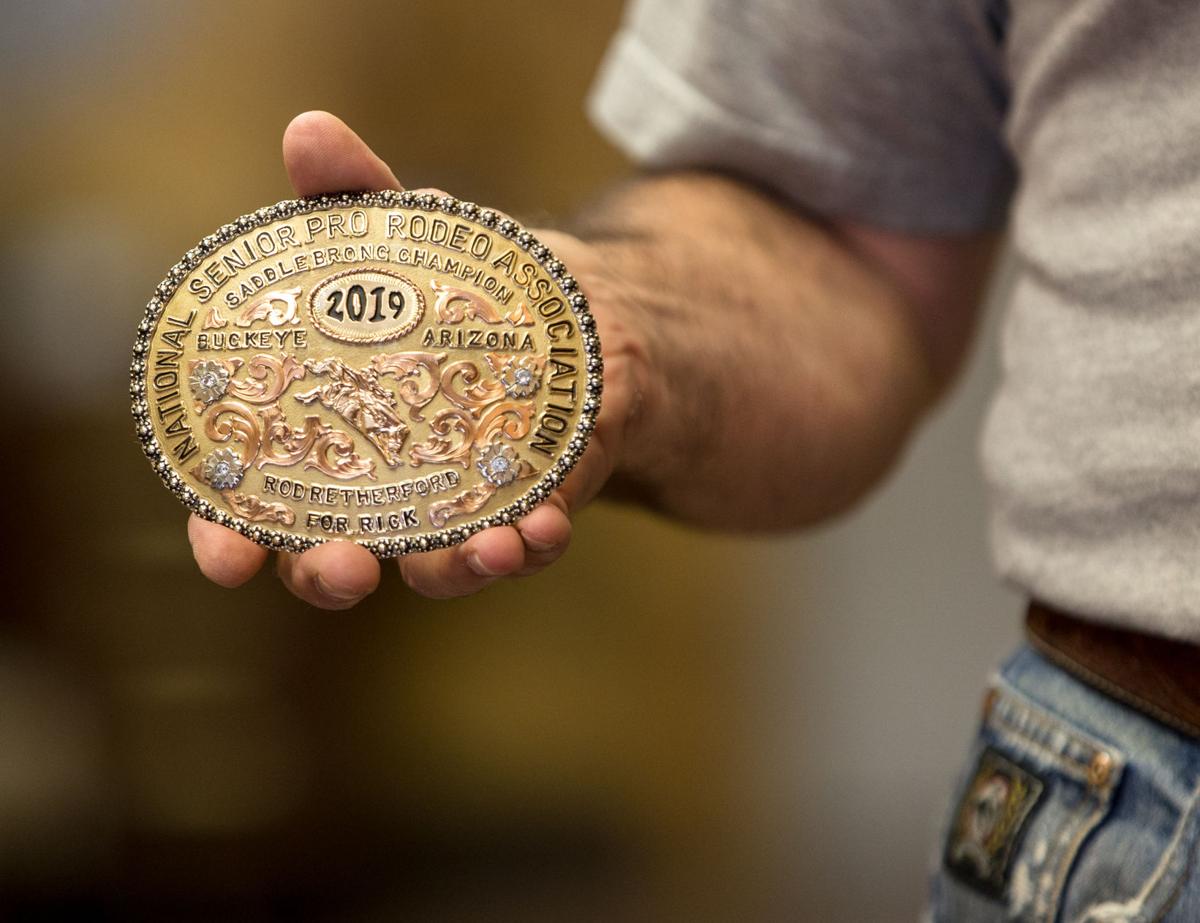 Rick Retherford holds the championship buckle he won at the Buckeye Senior Rodeo in saddle bronc. At the bottom are the words “FOR RICK.” 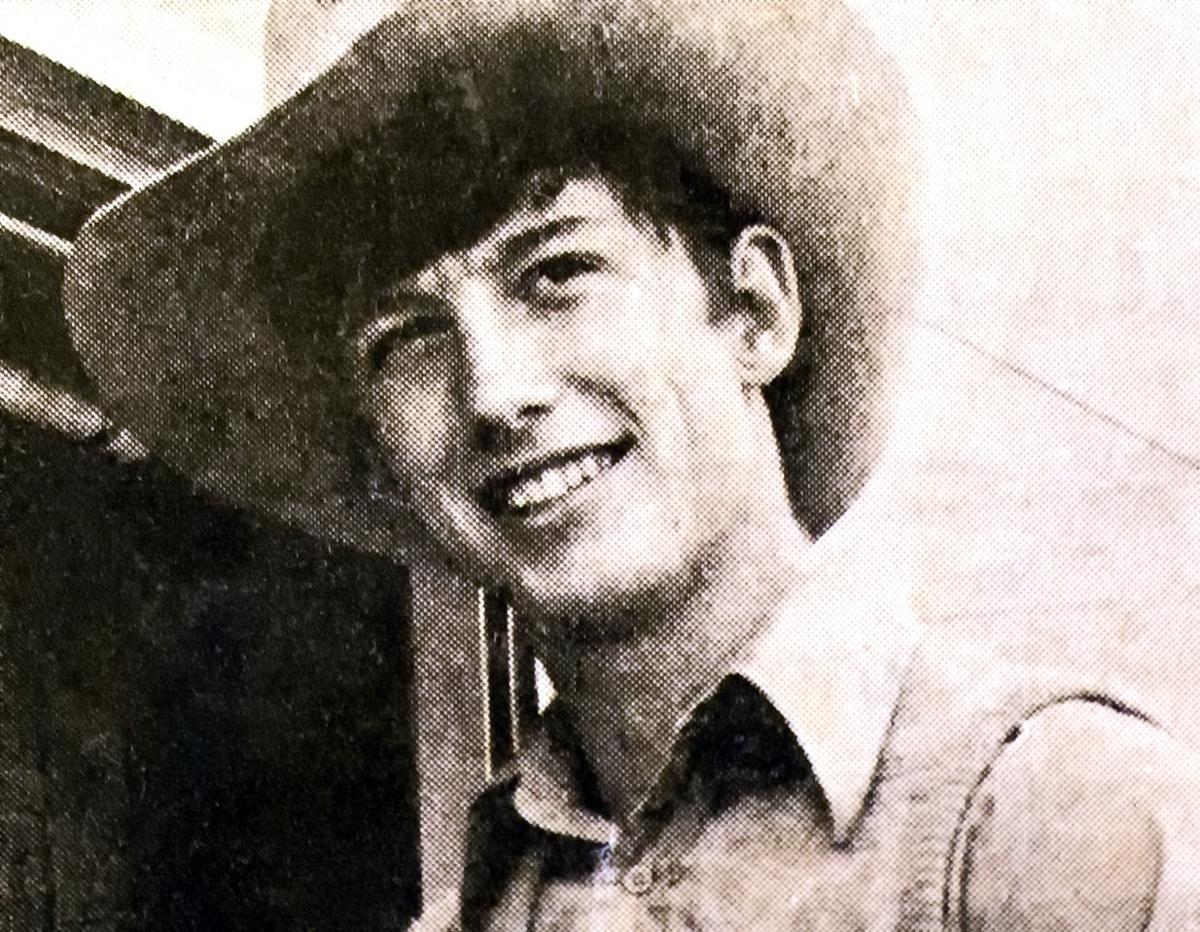 Rick Retherford smiles from an undated photo. The saddle bronc rider from John Day died at age 17 after being kicked in the head during Oregon state high school rodeo competition in 1974. 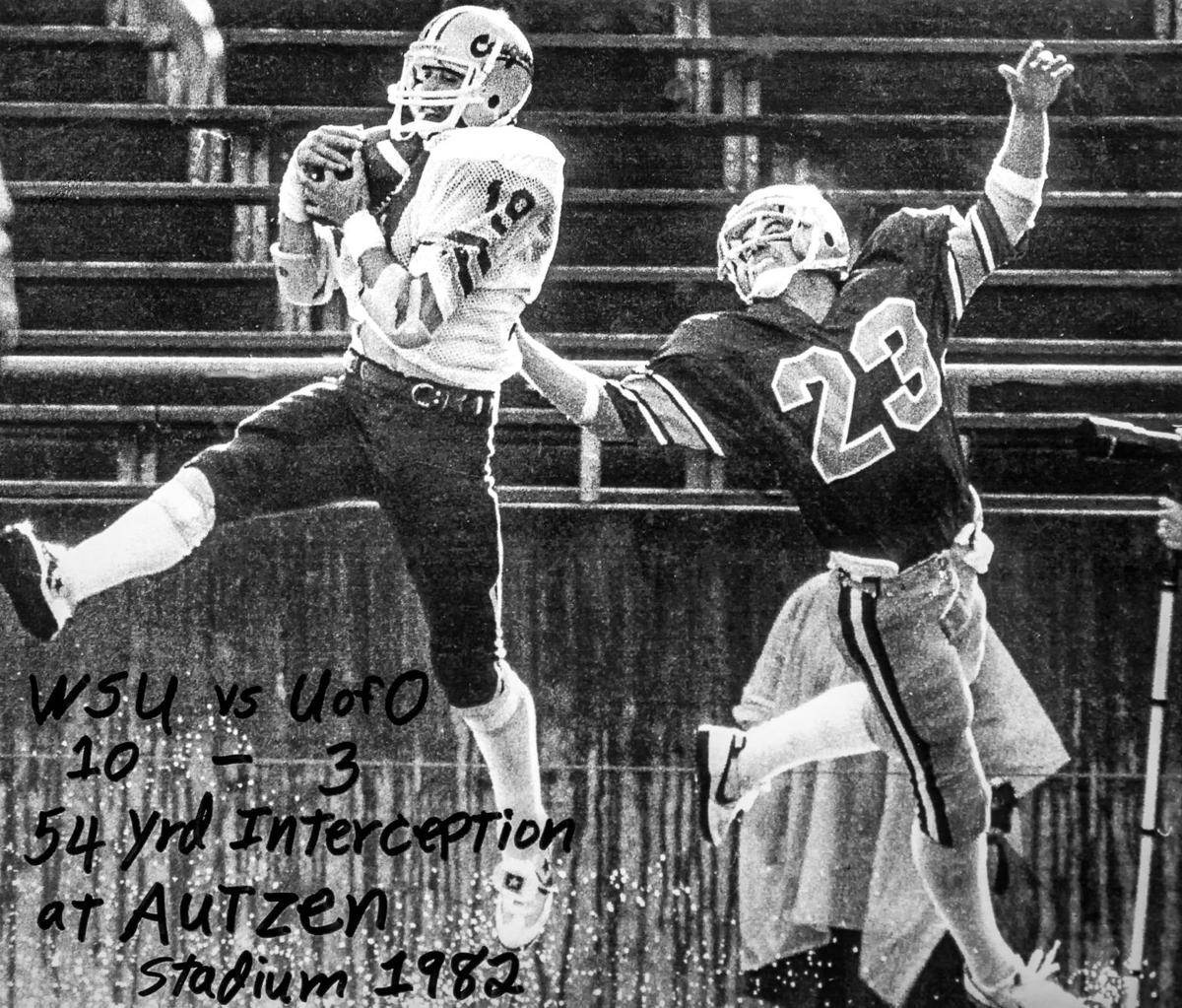 Washington State’s Rod Retherford (19) leaps high for a 54-yard interception against Oregon in 1982. 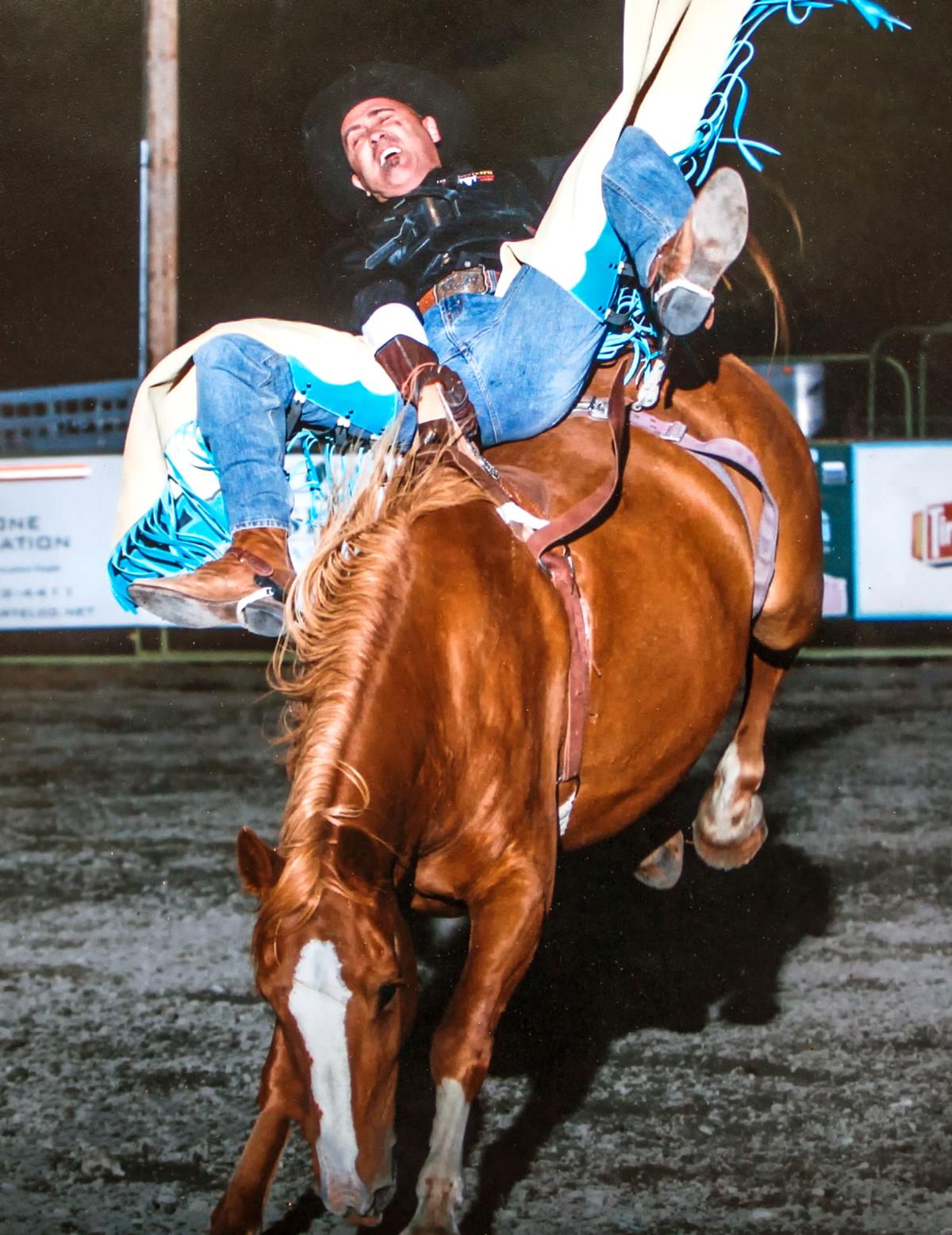 Pendleton saddlemaker Rod Retherford recently won a saddle bronc competition to honor his brother Rick, who died at age 17 in a rodeo. Retherford’s championship buckle includes the words “For Rick.”

Rick Retherford holds the championship buckle he won at the Buckeye Senior Rodeo in saddle bronc. At the bottom are the words “FOR RICK.”

Rick Retherford smiles from an undated photo. The saddle bronc rider from John Day died at age 17 after being kicked in the head during Oregon state high school rodeo competition in 1974.

Washington State’s Rod Retherford (19) leaps high for a 54-yard interception against Oregon in 1982.

PENDLETON — Rod Retherford gazed down at his 17-year-old brother’s coffin and felt heartbroken.

A horse named Headlights had kicked Rick Retherford in the head as he somersaulted to the dirt during the 1974 Oregon high school state finals saddle bronc competition. On the day of the funeral, 15-year-old Rod bent close and placed the championship calf riding buckle he’d won in junior rodeo gently on his brother’s chest. He softly made a promise.

“I’ll win a bronc riding title for you someday,” he said.

Life would take Retherford far away from rodeo for a time, but after 45 years, the Pendleton saddle maker recently made good on his vow.

In the aftermath of his brother’s death, young Rod struggled with the immensity of his loss. The boys had been close. Rick, a popular and handsome teen with an easy smile, had demonstrated a knack for rodeo until that final ride. The two brothers had formed a band that played rodeo dances in which Rick played lead guitar and sang, and Rod played drums. They loved to cruise in Rick’s electric blue Galaxy 500, smoking Swisher Sweets and dreaming of the day they would road trip to professional rodeos.

In addition, Rick had served as a protector to Rod, who stood only 4-feet-11 and weighed 82 pounds as a freshman. Rod went home from the funeral and found a belt buckle nearly identical to the one he had placed in Rick’s coffin and wore it every day as a way to feel connected to his brother.

He set about following Rick’s example in rodeo, riding bucking horses and bulls and later turning pro. It seemed he was on his way to winning that saddle bronc title for his brother.

Then football got in the way.

Retherford played his senior year in high school and proved to be small but mighty at free safety. His brother had also played football, so it was yet another way to feel close to Rick. In Rod’s last year at Treasure Valley Community College, after a growth spurt, he tried football again with great success. The next year, he walked on to the Washington State University football team and eventually got a full-ride scholarship. By that time, he weighed 185 pounds, still small for college ball, but he wasted no time worrying about his lack of bulk. Retherford credits his father for infusing him with tenacity.

“That man convinced me I was as big and bad as anybody else,” Retherford said. “He instilled in me the ability to believe in myself.”

Just after transitioning from walk-on player to scholarship athlete, Retherford suffered a huge setback. A teammate found Retherford’s “varmint pistol” under the front seat of his car and accidentally discharged the gun, shooting Retherford. The blast left him without the use of his right arm and with a bullet lodged in his neck.

He fought his way back to health, got back on the team and finished out his college football career as if the accident had never happened. In one game against University of Oregon, Retherford intercepted a 54-yard pass to cement the win.

The book “Rod” chronicles Retherford’s extraordinary life. A stack of the books sits on the counter in Retherford’s saddle shop next to photos of him playing football and riding broncs.

The book, however, doesn’t describe the latest chapter in Retherford’s life.

With his eye on making good on his long-ago promise to Rick, Rod got back into rodeo at age 54.

He had a rough first ride. Coming out of the chute, the bronc banged Retherford’s shoulder against the fence and then flung him to the dirt. He lay on the ground with a broken hand and two crushed vertebrae, before rising gingerly to his feet. The cowboy refused the offer of a re-ride, then reconsidered after his brother-in-law (who Retherford said didn’t realize the seriousness of the injuries) called him a “daisy.” In pain, he climbed on the next horse and rode to second place.

“I wasn’t no daisy,” Retherford said.

“Rick was always on my mind,” he said. “I just had it in my head to get this done no matter what.”

Retherford prevailed. The championship buckle he won bears an extra inscription that reads, “For Rick.” The new buckle replaced the old calf riding one he had worn for years to remember his brother.

On a day following the rodeo, Retherford was tooling a belt in his saddle shop when a thought came out of the blue. It had taken 45 years to fulfill his promise. It dawned on him that Rick’s football number at Grant-Union High School was 45. It felt like a sign that everything had worked out just right.

“He was a good kid that everybody liked,” he said. “He was a friend to everyone. He was a cowboy.”