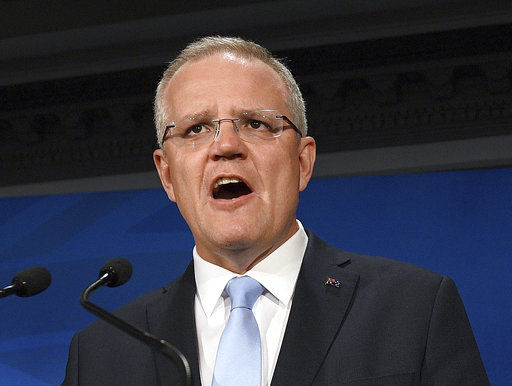 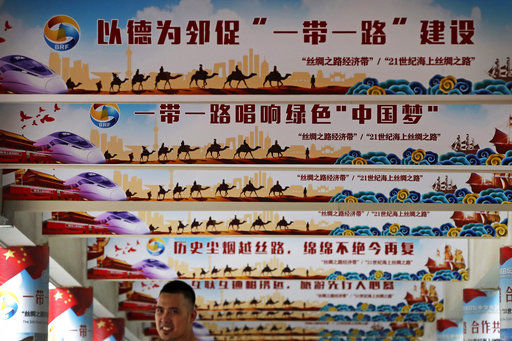 FILE- In this June 29, 2018, file photo, a man stands underneath the pillars displaying Chinese President Xi Jinping's signature "China Dream" and "One Belt, One Road" foreign policy plan during an event in Beijing. Australia's Prime Minister Scott Morrison on Thursday, Nov. 8, 2018 detailed plans for greater military and diplomatic engagement with Australia’s island neighbors who are increasing looking to China for aid through the Chinese One Belt One Road infrastructure program. (AP Photo/Andy Wong, File)

FILE- In this June 29, 2018, file photo, a man stands underneath the pillars displaying Chinese President Xi Jinping's signature "China Dream" and "One Belt, One Road" foreign policy plan during an event in Beijing. Australia's Prime Minister Scott Morrison on Thursday, Nov. 8, 2018 detailed plans for greater military and diplomatic engagement with Australia’s island neighbors who are increasing looking to China for aid through the Chinese One Belt One Road infrastructure program. (AP Photo/Andy Wong, File)

CANBERRA., Australia (AP)  Australia's prime minister on Thursday outlined plans to increase investments in infrastructure in the South Pacific as China's influence in those nations grows.

"My government is returning the Pacific to where it should be  front and center of Australia's strategic outlook, foreign policy and personal connections, including at the highest levels of government," Morrison said in a speech.

Another AU$1 billion ($728 million) will be injected into the Export Finance and Insurance Corp., Australia's export credit agency, which will be given more flexibility to support investment in the region that would benefit Australia, he said.

The Pacific region was estimated to need $3.1 billion in investment a year to 2030, he said.

The Australian Defense Force would also establish an Australia-based Pacific Mobile Training Teams that would visit island neighbors to train their militaries in humanitarian and disaster responses, peacekeeping and infantry skills.

Sen. Concetta Fierravanti-Wells, the-then minister for international development and the Pacific, told The Australian newspaper that China was lending to Pacific nations on unfavorable terms to construct "useless buildings" and "roads to nowhere."

"You've got the Pacific full of these useless buildings which nobody maintains, which are basically white elephants," she told the newspaper.

Fierravanti-Wells later said sustaining debt was a significant threat to economic stability of countries in the Pacific.

China's Foreign Ministry spokesman Lu Kang later said Fierravanti-Wells' published comments "show scant regard for the facts and are nothing but irresponsible," adding that China had made an official complaint to the Australian government.

Chinese aid had "significantly fueled the economic and social development of these countries and delivered tangible benefits to the local people," assistance that has been warmly welcomed by those countries, Lu said.

China transferred at least $1.8 billion in aid and loans to South Pacific countries in a decade through 2016, the Sydney-based Lowy Institute international policy think tank found.

The U.S. Overseas Private Investment Corp., the Japan Bank for Investment Cooperation and the Australian government announced in July a trilateral partnership to invest in infrastructure in the region.

The-then Trade Minister Steve Ciobo denied at the time the three-way initiative was a challenge to China, saying it only added to various regional programs already underway.

A U.S diplomat revealed in September that the United States, Japan and Australia were cooperating on a domestic internet cable proposal for Australia's nearest neighbor, Papua New Guinea, as an alternative to an offer by Huawei, the Chinese telecommunications giant that the United States regards as a cybersecurity threat.

Papua New Guinea Minister Justin Tkatchenko said his government was willing to work with Australia on the internet network if it offered a better deal than Huawei, The Australian newspaper reported.