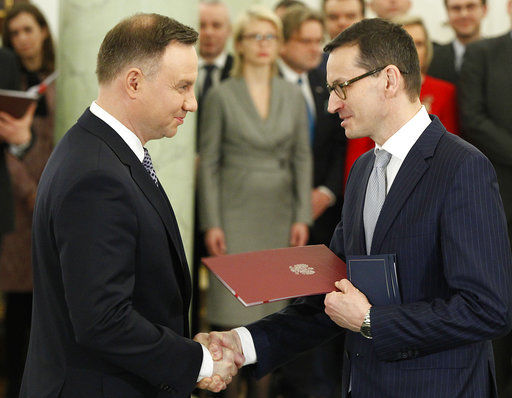 FILE - In this Dec. 11, 2017 file photo, Polish President Andrzej Duda, left, hands new Prime Minister Mateusz Morawiecki the document of his appointment as head of government at a ceremony at the Presidential Palace in Warsaw. Duda and Morawiecki will be among Polish government officials who will take part in a yearly march organized by nationalist groups on Sunday, Nov. 11, 2018. (AP Photo/Czarek Sokolowski, File) 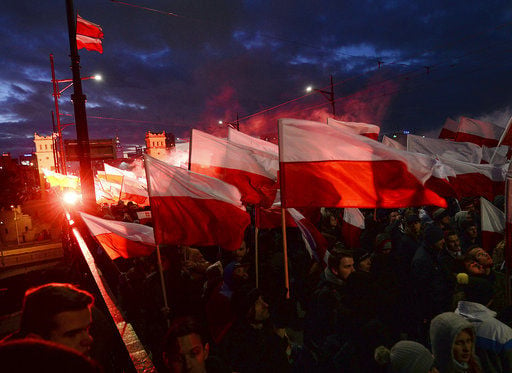 FILE - In this Dec. 11, 2017 file photo, Polish President Andrzej Duda, left, hands new Prime Minister Mateusz Morawiecki the document of his appointment as head of government at a ceremony at the Presidential Palace in Warsaw. Duda and Morawiecki will be among Polish government officials who will take part in a yearly march organized by nationalist groups on Sunday, Nov. 11, 2018. (AP Photo/Czarek Sokolowski, File)

WARSAW, Poland (AP)  The Polish government and the organizers of a march put on by nationalist groups annually for the country's independence holiday have agreed to hold a joint event in Warsaw Sunday on the 100th anniversary of Poland's rebirth as a state.

Michal Dworczyk, the head of Morawiecki's chancellery, tweeted that both sides reached an agreement, adding: "Poland won. On Nov. 11 there will be a great communal march to celebrate the 100th anniversary of Independence!"

The deal was also announced by the top march organizer, Robert Bakiewicz. He is a leader of the National Radical Camp, which traces its roots to an anti-Semitic movement of the 1930s.

The development underscored how the ruling Law and Justice party has at times sought to embrace the same base that supports far-right groups. It's a source of controversy in Poland, where many are furious at how radical nationalists came to dominate the Independence Day holiday.

Duda said he wants the participants to walk "under white-and-red flags, under our national colors, under the motto of a free and independent Poland."

The president told Poland's Nasz Dziennik newspaper he wants all the participating groups to leave their individual emblems and banners expressing their particular point of view behind.

Last year's march in the capital was cited in a recent European Parliament resolution that called for member states to act decisively against far-right extremism. It noted the presence at that march of xenophobic banners with slogans such as "white Europe of brotherly nations," and flags depicting the "falanga," a far-right symbol dating to the 1930s.

The announcement of the joint march comes after chaotic days of preparations and negotiations with the nationalist group before the centennial of Poland's independence, which was regained at the end of World War I in 1918 when the three empires  Russia, Austria and Germany  that had ruled Poland for more than a century collapsed in defeat.

Duda's office held talks with march organizers over several months in hopes of reaching an agreement on a joint march. But the talks broke down when the nationalists refused a demand to have no banners.

New talks between state officials and the nationalists took place Friday leading to the announcement of an agreement.

Wladyslaw Frasyniuk, a hero of the anti-communist Solidarity movement of the 1980s, strongly criticized the authorities for what he described as pandering to "bandits" and "fascists."

Law and Justice party spokeswoman Beata Mazurek appealed to all participants to be a "guardian" of order at the march and to report any "provocative behavior" to the police.

On the eve of the anniversary, Duda, Prime Minister Mateusz Morawiecki and Law and Justice party leader Jaroslaw Kaczynski attended the unveiling of a monument to former Polish President Lech Kaczynski, The twin brother of the ruling party leader was killed in a 2010 plane crash in Russia.

The memorial and its location in a large central square with statues and other installations representing significant moments from Poland's glorious and tragic past has been another source of national discord leading up to the independence centennial.

I'm not flying until there's a vaccine