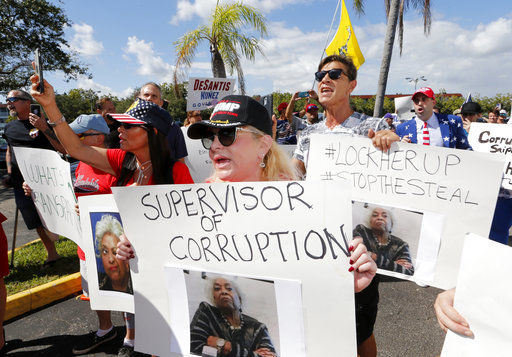 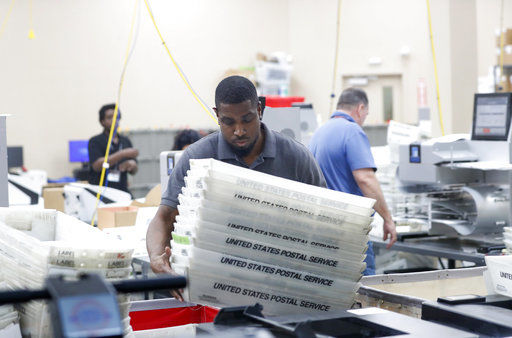 An employee at the Broward County Supervisor of Elections office picks up bins containing ballots as he counts ballots from the mid-term election, Thursday, Nov. 8, 2018, in Lauderhill, Fla. (AP Photo/Wilfredo Lee) 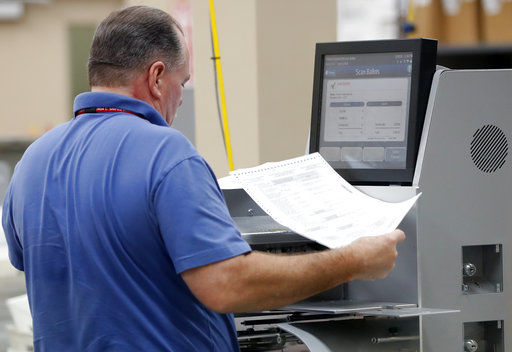 An employee at the Broward County Supervisor of Elections office runs ballots through a machine as he counts ballots from the mid-term election, Thursday, Nov. 8, 2018, in Lauderhill, Fla. (AP Photo/Wilfredo Lee) 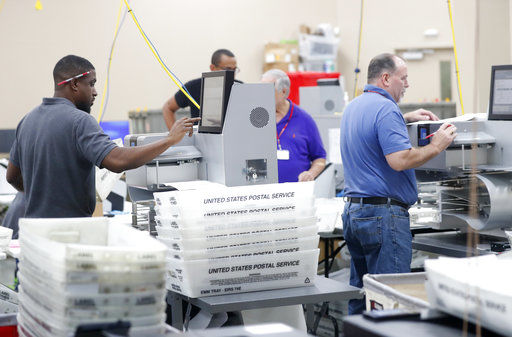 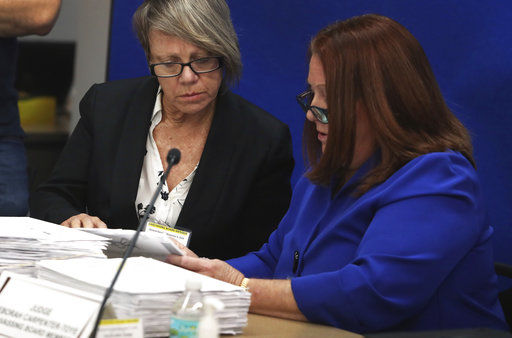 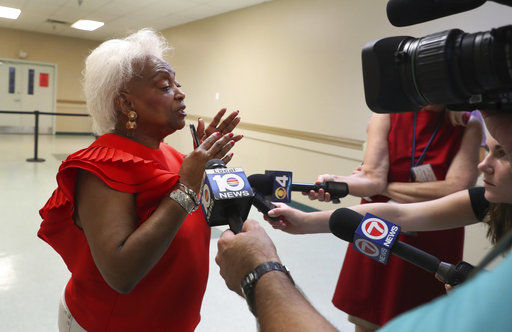 An employee at the Broward County Supervisor of Elections office picks up bins containing ballots as he counts ballots from the mid-term election, Thursday, Nov. 8, 2018, in Lauderhill, Fla. (AP Photo/Wilfredo Lee)

An employee at the Broward County Supervisor of Elections office runs ballots through a machine as he counts ballots from the mid-term election, Thursday, Nov. 8, 2018, in Lauderhill, Fla. (AP Photo/Wilfredo Lee)

TALLAHASSEE, Fla. (AP)  The Latest on the Florida election (all times local):

Judges in Palm Beach and Broward counties have sided with Florida Gov. Rick Scott against two supervisors of elections.

Circuit Judge Krista Marx on Friday ordered Palm Beach County Supervisor of Elections Susan Bucher to give the county canvassing board any duplicate ballots and any "overvoted" or "undervoted" ballots that have not yet been provided to the board by 10 a.m. Saturday.

Scott's campaign filed the lawsuits late Thursday, when he said during a news conference that "unethical liberals" are trying to steal the election.

U.S. Sen. Bill Nelson says his Republican challenger, Florida Gov. Rick Scott, fears that he will lose the election if all the votes are counted.

Nelson said Friday afternoon that Scott is impeding the democratic process and trying to stop all the votes for Florida's U.S. Senate race from being counted.

Scott has filed lawsuits against elections officials in Broward and Palm Beach counties and asked state law enforcement to investigate possible fraud. The Florida Department of Law Enforcement says no elections fraud allegations have been made, and there isn't an active investigation.

Scott said Thursday night that Democrats are continuing to find votes until they get the results they want.

Nelson responded that "votes are not being found; they're being counted."

A Broward County judge has ordered the immediate release of voter information sought by Florida Gov. Rick Scott from the county's supervisor of elections.

Circuit Judge Carol-Lisa Phillips set a 7 p.m. Friday deadline for Supervisor of Elections Brenda Snipes to turn over the voter information under Florida's open records laws. Phillips found that Snipes violated that law by failing to turn over the information to attorneys for Scott's Senate campaign and the National Republican Senatorial Committee.

Lawyers for Snipes argued that requiring such a swift response would interfere with ongoing efforts to finish counting Broward County ballots. But lawyers for Scott contended the information is already required to be collected under state law and should take minutes to provide.

The information sought includes ballots not yet reviewed by the Canvassing Board, absentee ballots and early voting ballots.

A spokeswoman says state law enforcement officials in Florida have not launched any elections-fraud allegations. The statement came a day after Republican Gov. Rick Scott said he would ask the Florida Department of Law Enforcement to investigate elections offices in Broward and Palm Beach counties.

That's where votes are being tallied in the U.S. Senate race between Scott and incumbent Sen. Bill Nelson.

Department spokeswoman Gretl Pelssinger said Friday that the agency is working with the Department of State and will investigate any allegations of elections fraud, but right now there are no such allegations.

Scott announced his intention to have law enforcement look into Broward and Palm Beach counties at a news conference Thursday night. Shortly after, President Donald Trump tweeted that law enforcement was looking into another big corruption scandal, claiming "Florida voted for Rick Scott!"

Scott holds a razor-thin lead over Nelson. Under Florida law, a recount is mandatory if the winning candidate's margin is less than 0.5 percentage points.

Scott says "unethical liberals" are trying to steal the election.

With a razor-thin margin in the race for Florida's U.S. Senate, the two sides are throwing jabs at each other over separate lawsuits.

Nelson and the Florida Democratic Party are suing to prevent elections officials statewide from throwing out mail-in votes and provisional ballots. They also have asked a federal court to extend the deadline for counties to submit unofficial election results.

Zeckman said Friday that the lawsuit is asking the court "to overrule election officials and accept ballots that were not legally cast."

Earlier Friday, Nelson lawyer Marc Elias criticized Scott for suggesting that he might get the state government involved.

Elias said it was "not appropriate" for a governor to suggest he was going to "interject his law enforcement authority to prevent the counting of ballots that have been legally cast."

A group of about 30 sign-holding Republican protesters gathered outside the office of Broward County Supervisor of Elections Brenda Snipes, singing "The Star Spangled Banner" and "God Bless America."

As the counting of ballots resumed Friday afternoon, Republican U.S. Rep. Matt Gaetzcalled Snipe "either incompetent or corrupt" and accused her of "spinning ballots out of nothing" in the Senate seat between Republican Gov. Rick Scott and Democratic incumbent Bill Nelson.

Gaetz, whose district is in Florida's Panhandle, also said the state should take over the Broward elections office.

During a Thursday night news conference, Scott announced he is suing the Palm Beach and Broward county supervisors of elections, saying "there may be rampant fraud" in the counties that heavily favor Democrats. He's asked the Florida Department of Law Enforcement to investigate.

On Friday, Nelson lawyer Marc Elias shot back at Scott on a conference call with reporters, saying "Just look at the behavior of your governor."

Elias says it's "not appropriate" for a governor to suggest he's going to use his powers to "interject his law enforcement authority to prevent the counting of ballots that have been legally cast."

A court in South Florida has been asked to intervene in the tight U.S. Senate race between Democratic U.S. Sen. Bill Nelson and Republican Florida Gov. Rick Scott as the two sides prepare for a possible recount. A hearing was set for 3 p.m. in state court.

Scott filed lawsuit against Broward County Supervisors of Election Brenda Snipes Thursday night, asking the court to order Snipes to turn over several records detailing the counting and collection of ballots. Scott's thin lead over Nelson has narrowed in the vote-counting in the days since he declared victory on Tuesday night.

Without citing any evidence of wrongdoing, Scott also asked Florida Department of Law Enforcement to investigate elections offices in the Democratic strongholds of Palm Beach and Broward counties, questioning whether they have been taking too long in some sort of effort to inflate the Democratic vote.

Razor-thin margins in Florida's bitter races for the U.S. Senate and governor are raising the possibility of recounts, potentially prolonging two of the most closely watched contests of the nation's midterm elections.

In the governor's race, Democrat Andrew Gillum's campaign said Thursday it's readying for a possible recount. He conceded to Republican Ron DeSantis on Tuesday night, though the race has since tightened. DeSantis led Gillum by 0.47 percentage point as of Thursday afternoon.

Meanwhile, Democratic Sen. Bill Nelson has begun preparing for a potential recount in a race that is still too close to call against Republican Gov. Rick Scott. Scott held a 0.21 percentage lead over Nelson on Thursday afternoon.

The tight races underscored Florida's status as a perennial swing state where elections are often decided by the thinnest of margins.

In 2000, Florida decided the presidency by a few hundred votes in a contest that took more than five weeks to sort out.

Jake Tapper discusses movie based on his best-selling book

Analyst: You can sue the goverment, but chance of success is slim