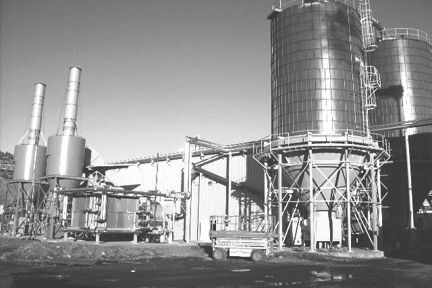 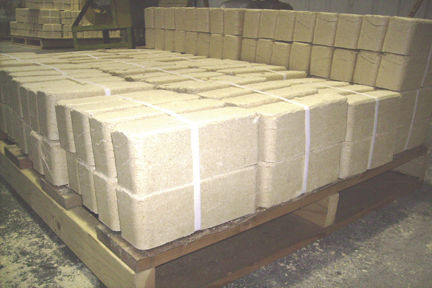 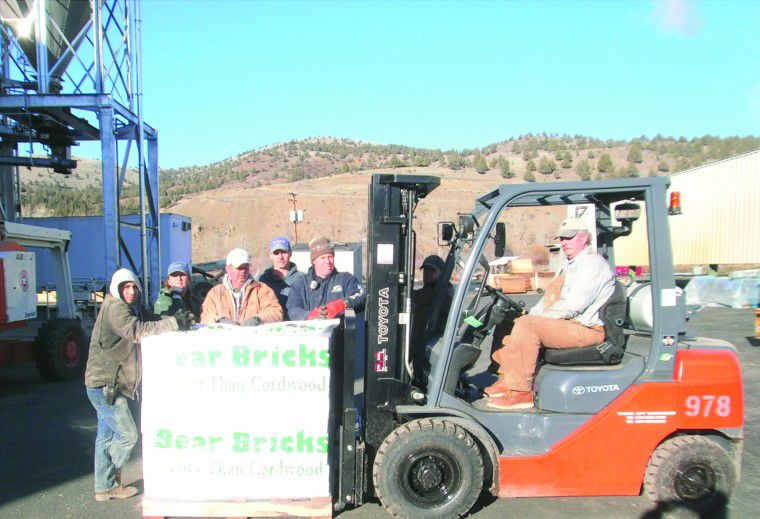 Workers at the new biomass plant in John Day load a pallet of heating bricks made out of woody debris from surrounding forests.

Workers at the new biomass plant in John Day load a pallet of heating bricks made out of woody debris from surrounding forests.

Northeast Oregon's emerging woody biomass industry continues to grow and provide jobs throughout the region, helped along by government funding and tax credits.

Government agencies, private business and nongovernmental organizations have partnered to create business opportunities in biomass, and several institutions in eastern Oregon have converted from fossil-fuel heating systems to biomass.

Grant County, spanned by portions of four national forests, is home to two large biomass processing plants. A new multimillion-dollar facility built by Ochoco Lumber Co. at the Malheur Lumber Co. mill site in John Day began turning out pellet products early in January, although the Prairie Wood Products Co-gen Co. facility - an electricity-generating plant - in Prairie City has been shut down since June due to low power rates and uncertainties about federal and state subsidies.

In nearby John Day, Malheur Lumber workers worked overtime last December to get the Ochoco plant fired up. It began producing fuel pellets and compressed-fiber bricks for heating as workers fine-tuned the custom-designed system.

"You don't just flip the switch on a facility like this one," said plant manager Mike Billman. "It's a high-tech system and we're going through the plant part by part, piece by piece."

So far, the new facility is employing 12 to 15 people and company officials say they hope to create 30 to 40 new jobs in an area with some of the highest unemployment rates in the state.

"The plant is designed to increase capacity," Billman said.

The company is primarily a sawlog manufacturer. The new pellet plant, while creating new jobs, helps preserve more than 100 existing jobs at the Malheur Lumber sawmill, the county's second largest employer, according to company officials.

They also tout the benefit for the forests.

"The upgrades to the sawmill and the new biomass plant will aid in active forest fire management by reducing underbrush and thinning dense stands of small diameter timber," according to Billman.

The money to build the biomass plant came through the Malheur National Forest's successful application for $4.89 million in economic stimulus money from the American Reinvestment and Recovery Act. The project also received a $750,000 Forest Service grant for log shaving and bagging equipment.

In neighboring Baker County, Elkhorn Biomass Resources operates processing facilities in Baker City and west of town, at the base of the Elkhorn Mountains. Owner Lane Parry has taken a forestry background into the biomass industry and offers several products to the residential and industrial markets.

The company salvages and bundles residual wood left after timber and thinning operations. The wood is split, sorted, loaded onto pallets and shipped to grocery and hardware stores. They also chip submerchantable logs for heating fuel, dry animal bedding products and for mud abatement at construction sites.

Wallowa County Resources and its for-profit subsidiary Community Solutions have secured $775,000 in public funds - $500,000 from the US Department of Energy and $275,000 from the Oregon Department of Energy's State Energy Program - to install a combined heat and power plant on the new Wallowa County Integrated Biomass Energy Campus, scheduled to begin operation in the summer of 2011.

Energy from the power plant will be net-metered to businesses on the campus through an agreement with Pacific Power.

Two existing wood products businesses already operate on the site, Smallwood Solutions and Biomass Resources. When fully operational, the campus will include a log sorting and merchandizing business, according to Wallowa Resources executive director Nils Christofferson.

Organizers believe that the campus, when fully implemented will be capable of generating $3 million per year in local log payments supporting 25 to 30 on-site jobs and additional employment in the woods.

Joining the region's biomass producers is a growing number of institutional consumers opting for heating systems that burn biomass instead of fossil fuels. The Harney District Hospital uses a biomass pellet-boiler, the Enterprise School has converted to burn loose woody fuel, the new terminal building at the John Day Airport has been fitted with a biomass system and several schools and hospitals in the region are conducting biomass feasibility studies.

The transitions to biomass have not all been smooth, as the administration at the Enterprise school district has learned. The district converted to biomass in September 2008 and has faced challenges with the operation of the new boiler and in getting the proper material for the equipment.

"The system turned out to be a lot more temperamentally than we originally thought," Enterprise school superintendent Brad Royse said. The boiler has also demanded much more attention from the maintenance department, who must attend to the boiler seven days per week.

Royse said that thus far, operation costs are double what was estimated. School board chair Nils Christofferson, who spearheaded the move to biomass explained the difficulty in getting the proper material for the system and said that once the bugs were ironed out, the system would become budget neutral, and would begin saving the district money in energy costs.

The district has kept and recently replaced its oil-boiler system for backup and for use when only a small amount of energy is needed.

State and federal government representatives are trying to ease the growing pains of the new biomass industry with proposed legislation to guarantee adequate supplies of woody material for processors, and provide tax credits for biomass and subsidies for the transportation of low-value woody materials.

A bipartisan group of 32 U.S. House members signed a letter dated Dec. 10, asking that the Environmental Protection Agency reconsider its decision against classifying biomass as a renewable energy. Failing to recognize biomass as a renewable energy lumps it together with fossil fuel burning facilities and threatens the fledgling industry because of new strict emission limits originally scheduled to be put in place in January 2011.

The EPA responded to the letter from legislators by delaying implementation of the new regulations until April 2012. U.S. Rep. Greg Walden praised the decision to delay what he referred to as "job-killing regulations."