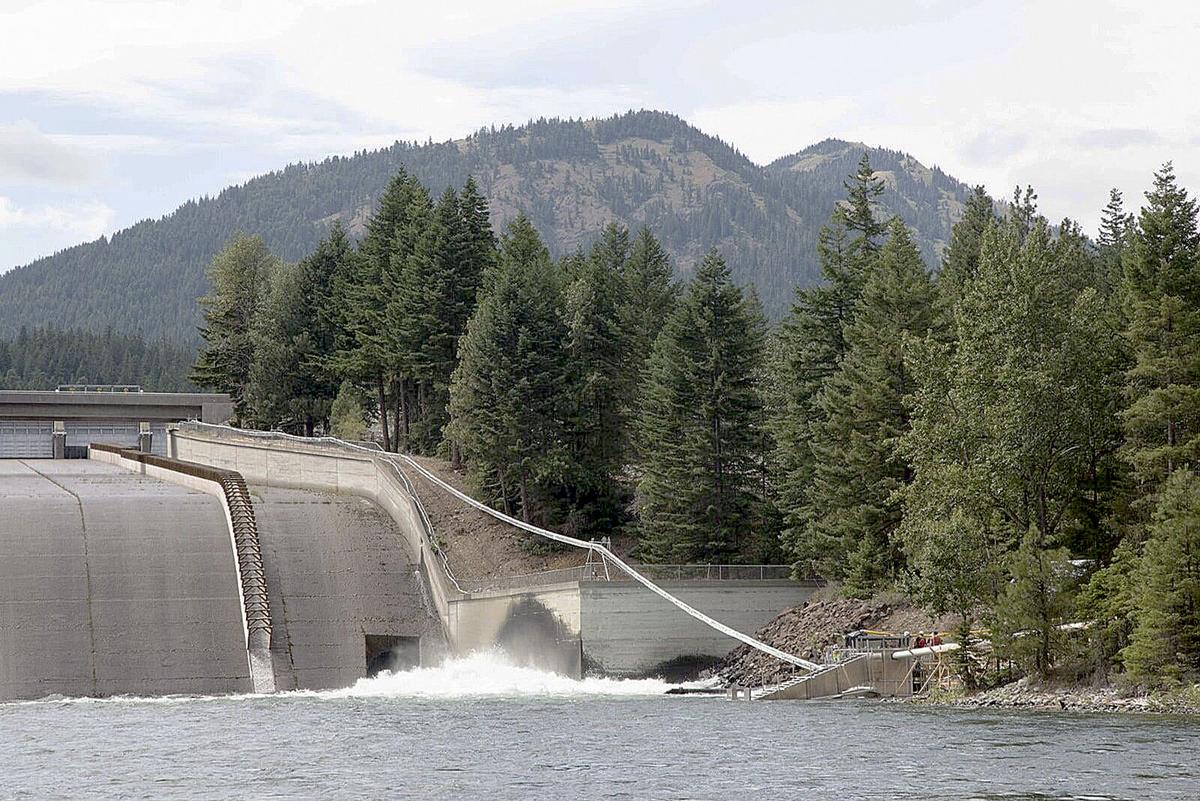 A tube carries fish over the Cle Elum Dam in July 2017. The 1,700-foot-long tube is the longest Whooshh Innovations has used to transport salmon. Fish travel at 32 feet per second. 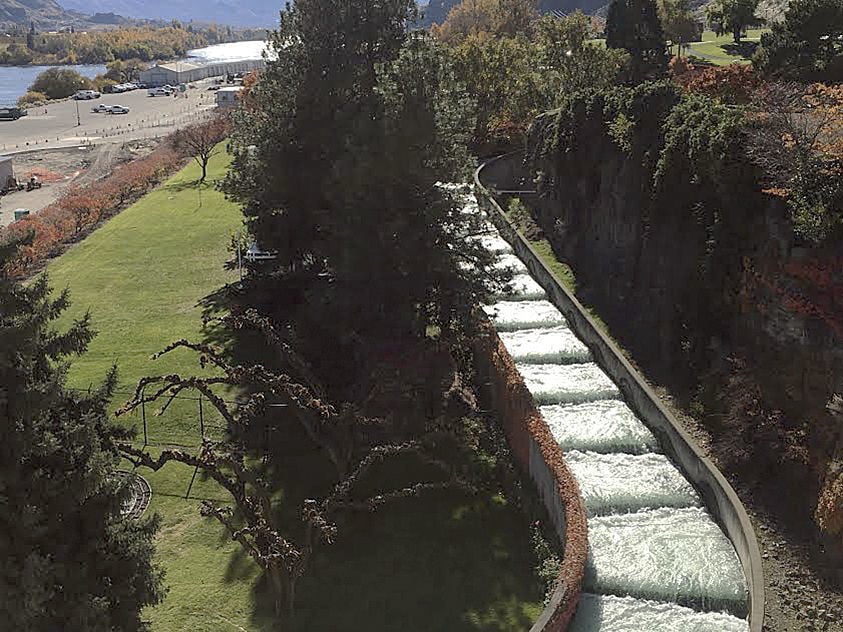 Fish ladders such as this one at Rocky Reach Dam, north of Wentachee, Wash., have been installed at some dams. The Whooshh system is less expensive and easier on the fish, its inventor says. 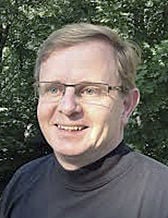 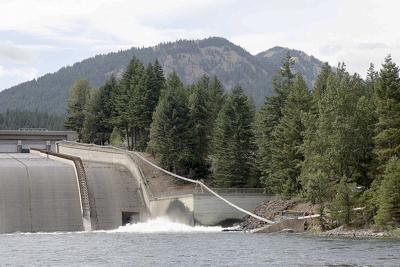 SEATTLE — Eight years ago, Vincent Bryan III was field testing his prototype of an apple harvest-assist machine in his family’s orchard near the Columbia River southwest of Quincy, Washington.

Helicopters passed overhead with large buckets of water dangling from them. He was curious about their mission and later found out they were moving salmon over a nearby dam.

It seemed to him like an expensive way to move fish.

His apple harvest machine used vacuum tubes to move apples from pickers’ hands to a bin. He wondered: What if you could move salmon over dams in tubes instead of using helicopters, fish ladders or trucks?

About a year later, he was testing his harvest-assist machine in a citrus orchard near Fresno, California, and noticed a neighboring orchard, which had been alive the year before, was now dead. Its irrigation water had been reallocated for fish.

Believing there had to be better solutions, Bryan turned from his fruit harvest-assist machine to experimenting with moving fish in tubes.

He assembled a meeting of fish experts from the National Marine Fisheries Service, also known as NOAA Fisheries, the U.S. Army Corps of Engineers, the Washington Department of Fish and Wildlife, and universities to discuss his idea.

They met at his family’s Cave B Inn & Spa Resort near their Cave B Estate Winery and orchard, southwest of Quincy, where he first observed the helicopters carrying fish.

In an effort to help 12 salmon and steelhead populations that are protected under the Endangered Species Act, the federal government has spent more than $1 billion to help the fish get past the dams and to improve their habitat, according to the Northwest Power and Conservation Council.

While much focus had been on helping juvenile salmon headed downriver to the ocean, the consensus in the group was to help salmon returning upriver to spawn.

“Fish ladders had not entirely solved the problem as evidenced by declining returns, so mathematically you could have a much greater impact on returning one adult pair upstream than aiding two juvenile downstream,” Bryan said.

For a variety of reasons, a huge percentage of adult salmon die before reaching spawning beds in the far reaches of tributaries. And juvenile salmon that do hatch from their eggs are often food for invasive fish species.

On top of that, sea lions consume large numbers of salmon heading from the ocean up the Columbia River at Bonneville Dam. Also, on hot summer and early fall days, fish ladder water gets too warm, causing salmon to turn away, seeking cooler water.

By using his system to divert invasive fish and getting more salmon to spawning grounds, their numbers will increase, Bryan said. It can be done more efficiently and at a lower cost than fish ladders and saves the 5% to 10% of the riverflow from going down fish ladders. That water can instead be used for more power generation.

In 2013, Bryan changed the name of his Seattle company from Picker Technologies to Whooshh Innovations Inc. and for the next two years worked on developing fish-friendly transport tubes and the accompanying systems that move fish over dams quickly and efficiently. The system could also be used to move fish in commercial aquaculture and in processing plants.

The name, Whooshh, was chosen to replicate the sound of fish going through tubes and, eying international sales, everyone could relate to it. The company also trademarked the name “salmon cannon.”

There were design, engineering, prototypes, testing and regulations. There were new studies every time a component was added or changed. Some 20 studies were done by independent laboratories.

“It’s not an approval process but more akin to ‘we won’t object,’” Bryan said of working with governmental agencies.

“We proved it’s as good or better than alternatives. We asked skeptics to step back from the river through their backyard and look at the bigger picture,” he said.

Part of his pitch was that wind and solar generation won’t be able to meet the demand if the public wants a non-carbon-powered electrical grid. That means hydropower — dams — must remain part of the picture, and for that to happen fish passage must be improved.

“I once saw it in operation and was impressed. Especially moving large animals over long distances with minimal handling and mortality,” he said.

Sylvia said he has not done an economic analysis or reviewed any economic or financial analyses by others, but that the real question is whether state and federal agencies believe the costs, including morbidity and mortality, are lower than other methods, including trucking and fish ladders.

Bryan said multiple independent studies show that to be the case and are available on his website. He said he works closely with NOAA Fisheries, the main agency on salmon migration and permitting, but that it can’t approve a technology, only a site.

Bureaucracy is slow to recognize and adapt to better ways of doing things and won’t until people demand that politicians push for change, Bryan said.

While the U.S. Army Corps of Engineers was helpful last summer with a demonstration of the system at Chief Joseph Dam on the Columbia River, it is spending $200 million to update a trap-and-haul fish passage systems at the Buckley Diversion and Mud Mountain dams in King County. Whooshh could provide better passage for $20 million, Bryan said.

“From our perspective this is a question of bureaucracy and a lack of impetus for people to do things differently even though there is overwhelming evidence what they have been doing is not good enough,” Bryan said. “If scientists and agencies paid attention to the science they would not be hesitating. They can look at the data on our website. We can talk about this stuff forever, or actually do it.”

Whooshh sold its first system at the end of 2014 to the Washington Department of Fish and Wildlife to separate wild and hatchery fish on the Washougal River near Vancouver.

Whooshh has now deployed 20 systems, not all dam fish passage systems, to sites in the Northwest, Sweden and Norway. It has signed an agreement in Argentina and on Oct. 21 met with representatives of China.

A scanning system Whooshh installed this spring at Bonneville Dam showed 14% of salmon with major injury, mostly from sea lions, that will prevent them from spawning, Bryan said.

Of the 20 systems, five provide seasonal fish passage at dams. The longest is 1,700 feet and 180 feet high at the Cle Elum Dam in the Washington Cascades.

On Aug. 22, about 200 people attended a demonstration at Chief Joseph Dam, the second-largest dam on the Columbia after the Grand Coulee Dam.

Salmon migration ends at the Chief Joseph and Grand Coulee dams because Grand Coulee, about 350 feet tall from the downriver to upriver side, is too tall for a fish ladder.

For years, the Colville Confederated Tribes and others who support native fish runs in the Columbia have desired some means of helping salmon past those dams. Bryan believes his system is the answer and foresees it being used on other dams on the Columbia and other rivers in Washington and British Columbia.

Fish ladders can be long and exhausting for fish. Whooshh tubes can move salmon over dams much faster and with less stress and mortality to fish. The tubes are modular and portable and typically cost 60% to 80% less than a fish ladder or truck operation, Bryan said. Over time, ladders also fill with sediment, which has to be removed.

Dam operators can pay for the system in extra power generated from water no longer diverted into fish ladders, he said.

Whooshh Innovation’s fish tubes are made with a flexible, soft, translucent material. Water mist is injected into the tube to make it nearly frictionless for the salmon.

Salmon are attracted by a flow of water to an 18-inch-wide entry point, narrow enough that fish enter one at a time swimming slightly uphill. Then they slide downhill into a dewatered trough where a computerized, optical system sorts hatchery salmon, identified by tags or clipped adipose fins, from wild salmon and from invasive species.

Hatchery salmon are diverted to a hatchery, invasive fish can rerouted for several uses and wild salmon continue into the tube and over the dam.

The system can handle up to 40 fish per minute, which is more than 57,000 fish in 24 hours. If the need is greater, a second system can be added, Bryan said.

A goal is to limit a fish’s tube travel time to less than 1 minute. The top speed for the 1,700 feet at Cle Elum Dam is 32 feet per second, or 22 mph, decelerating in the last 300 feet. The National Marine Fisheries Service requires they exit the tube at no more than 25 feet per second.

“We’ve done our work on the technical side, now we’re trying to help operators with the financing side and then it’s just scaling up the number of systems we can produce in a year,” Bryan said.

Bryan developed an interest in marine biology during his high school years in Edmonds, Washington, and was involved with his parents, Vincent Bryan Jr. and Carol, as they bought alfalfa fields and sagebrush overlooking the Columbia River southwest of Quincy and developed orchards, vineyards and a winery. His father, a neurosurgeon, got the wine bug from a colleague.

“So we flew to France and took soil samples from the best vineyards,” Bryan said. “We asked a realtor to find property with that kind of soil and that’s how we ended up here (southwest of Quincy).”

The family then built the Cave B resort and winery next door. It later sold the resort but still owns the winery, vineyard and orchard. Bryan’s wife, Janet, is chief financial officer of the winery. His sister, Carrie, does winery marketing and Carrie’s husband, Freddy Arredondo, is the winemaker.

Bryan, now 54, became an attorney specializing in contract law, worked for the Adobe software company and helped the family sell the amphitheater and with other transactions.

His sister, Janine Bryan, is a scientist who developed the vaccine Gardasil to prevent human papillomavirus, the second leading cause of cervical cancer. She is Whooshh vice president of biology.