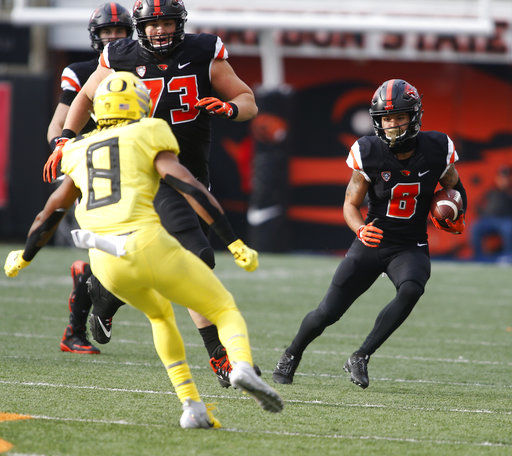 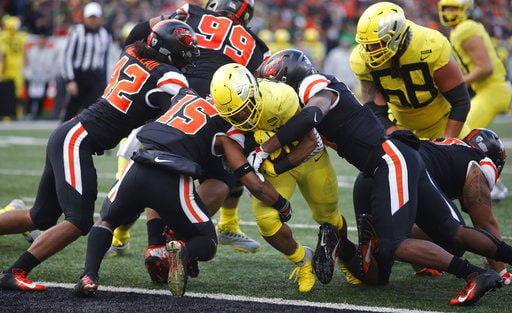 The former Beavers quarterback returned to Corvallis and wrapped up his first season as a head coach with a 2-10 record, dropping eight of nine in Pac-12 play.

After a stint as quarterbacks coach at Washington under Chris Petersen, Smith took over an Oregon State team that won just one game in 2017 and lost its coach when Gary Andersen surprisingly stepped down in the middle of the season.

Smith's inaugural season ended with a 55-15 loss to Oregon on Friday. Asked to reflect on his first year, Smith said the Beavers did not go for the quick fix of bringing aboard transfers and instead focused on a deliberate rebuilding process.

There were some bright spots, including the emergence of Jermar Jefferson, one of the best running backs for the Beavers since Jacquizz Rodgers.

Jefferson rushed for 1,380 yards this season, a school record for a true freshman, with 12 touchdowns. He averaged 115 yards rushing to rank among the top running backs in the nation.

"I'd say throughout the season we played with full effort through four quarters, and that was something maybe we lacked a little bit last year," Hernandez said. "I'm proud of the way these guys came out every week, and put everything they had on the line for us."

It was another disappointing year for senior quarterback Jake Luton, who again was plagued by injuries. Last season he suffered a thoracic spine fracture against Washington State. This season he had a concussion and a high ankle sprain that kept him out of four games.

Smith said before the Civil War there's a possibility the 6-foot-7 Luton could petition for a medical hardship waiver for a sixth year of eligibility. Luton told The Oregonian that he would be open to returning for another season.

The Beavers posted their first Pac-12 victory since 2016, a 41-34 overtime victory at Colorado. The win also snapped a 22-game road losing streak dating to 2014. The Buffaloes were in the midst of a slump that cost coach Mike MacIntyre his job before the season's end.

There was a light moment following the final game against the rival Ducks. Junior linebacker Andrzej Hughes-Murray knocked over a chair by accident  not frustration  after he had wrapped up the postgame press conference.

"Don't put that down as me running out of here all angry," he said.

After a team meeting on Monday, Smith and his staff head out on the recruiting trail. He said a priority is shoring up the line of scrimmage, both on the offensive and defensive sides.

While the Beavers' defense did not hold a conference opponent to fewer than 500 yards offense this season, Smith said he does not expect to make any staff changes.

"We knew we were going to try to lay a foundation this year," Smith said. "I think this year is disappointing, for sure. But, there will be some positives if we continue to work and look back on this year and we've actually built a solid foundation."