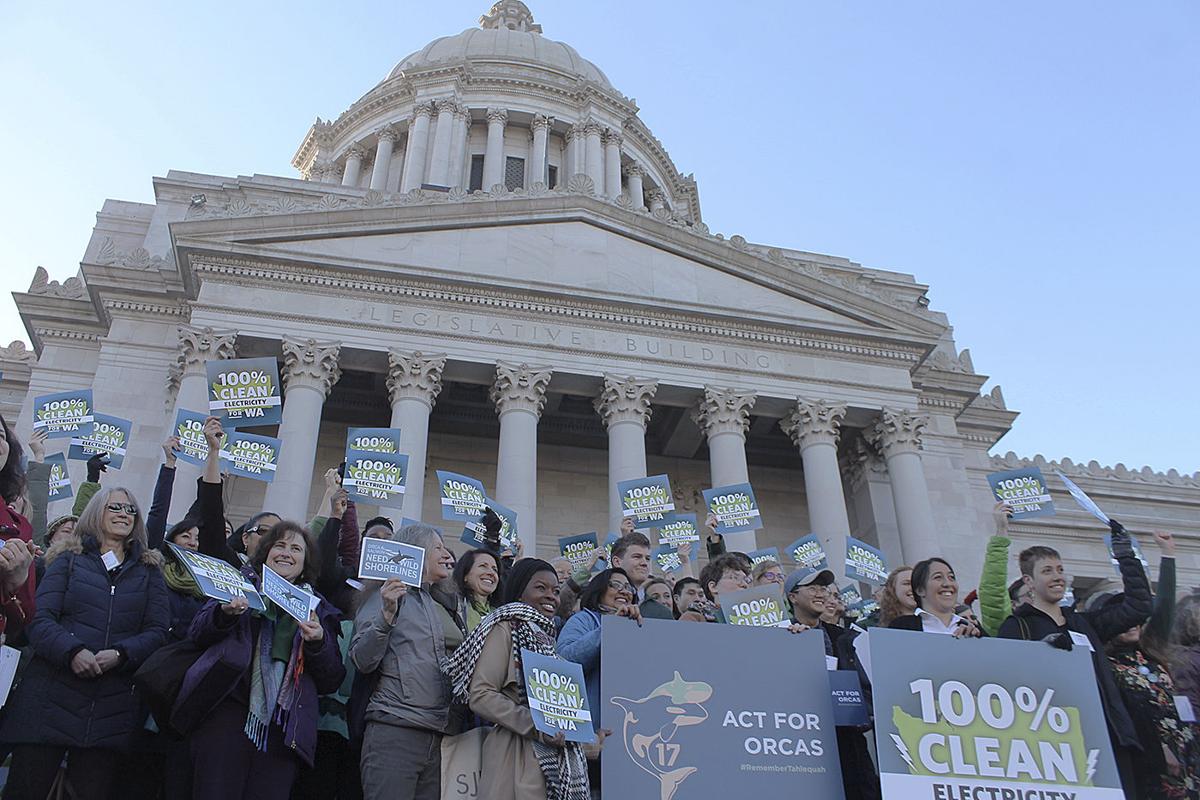 Environmentalists rally at the Capitol in Olympia, Wash., during the 2019 legislative session. A task force created by Gov. Jay Inslee has recommended combatting climate change to save orcas in Puget Sound. 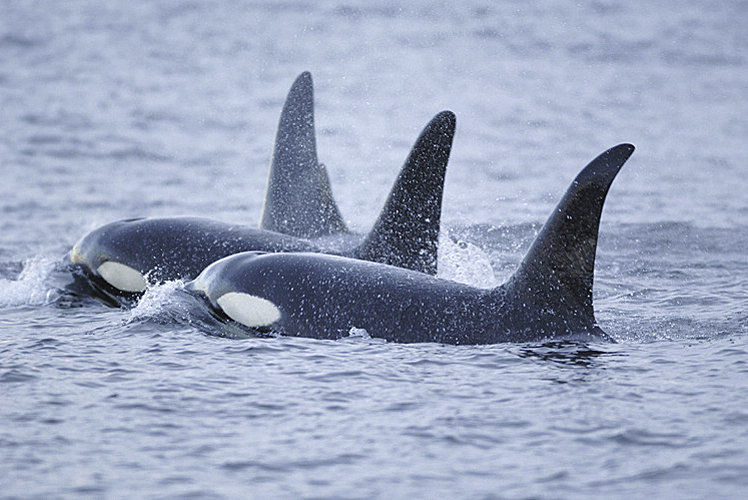 Orcas, also known as killer whales, travel off the coast of Washington state.

Environmentalists rally at the Capitol in Olympia, Wash., during the 2019 legislative session. A task force created by Gov. Jay Inslee has recommended combatting climate change to save orcas in Puget Sound.

Orcas, also known as killer whales, travel off the coast of Washington state.

OLYMPIA, Wash. — Climate change imperils orcas in Puget Sound and to save them Washington should restructure its economy and eliminate carbon emissions by 2050, according to a task force report finalized Nov. 8 for Gov. Jay Inslee.

Global warming’s wide-ranging effects, from a smaller snowpack to ocean acidification, will harm the South Resident orcas and the salmon they eat, the report warns.

Restraining population growth, discouraging meat eating and requiring development to have a “net ecological gain” would help, according to the report.

The goal is to have 84 Southern Resident orcas in Washington’s coastal waters in a decade. There are 73 now.

“With only 73 individuals remaining, there is no time to waste — the road to sustained Southern Resident recovery is through swift, bold and impactful solutions,” task force co-chairs Les Purce and Stephanie Solien wrote in an introductory letter.

The report follows one last year that made 36 recommendations for nourishing orcas that depend on chinook salmon. The report states lawmakers appropriated $1.1 billion in 2019 to support orca recovery and that was an “encouraging first step,” but the state should now “double down.”

With the second report done, the Inslee-created task force was disbanded. Its recommendations include a new orca-recovery office, co-managed by the governor and tribes, to help orcas, promote environmental justice and maintain public “interest in this crisis.”

The report was approved by consensus at a task force meeting attended primarily by its government and tribal members.

Washington Farm Bureau director of government relations Tom Davis said he was particularly concerned about the call for every development to have a “net ecological gain.” Would that make converting a pasture into an orchard impossible? he asked.

“It’s pretty cute coming from people who already have their houses and their land developed, but how does it apply to farmers? It’s unknown and quite concerning,” Davis said.

Lawmakers also embraced a recommendation to hold a $750,000 “stakeholder process” to study the consequences of breaching four Lower Snake River dams. A report is due in December.

According to the report, “a policy framework and investment is needed to restructure the economy, ensure equity ... and accelerate the transition to a low-carbon future.” The task force urged “transformational change” in regulating land, especially to counter the Trump administration.

Defenders of Wildlife’s Northwest representative Robb Krehbiel said he was pleased by the ambitious recommendations.

“If we want the next generation of Washingtonians to know our orca neighbors, Gov. Inslee and the state Legislature must turn these new recommendations into law, while increasing our investment in recovery actions from the year-one report,” he said in a statement.

“I don’t want to minimize some of this stuff. Puget Sound basin is in rough shape. We certainly have work to do there,” Blake said. “But I don’t think expanding government right now is the right solution.

Blake was on the task force in year one. He turned the position over to another lawmaker for year two.

“It was clear to me they were going to piggyback onto orca recovery other desires,” he said. “I think that was kind of the fear as we started the journey on the orca task force.”

Okanogan County Commissioner Andy Hover also served on the task force in its first year, but not the second. He said the task force’s monthly meetings conflicted with the commission’s weekly meetings, and he wasn’t motivated to break away.

“When we first started, we were looking at things that would make an impact on (orca) population in the short term,” he said. “As it progressed, there were a lot of people asking about taking out the dams and things slowly went down the rabbit hole.”