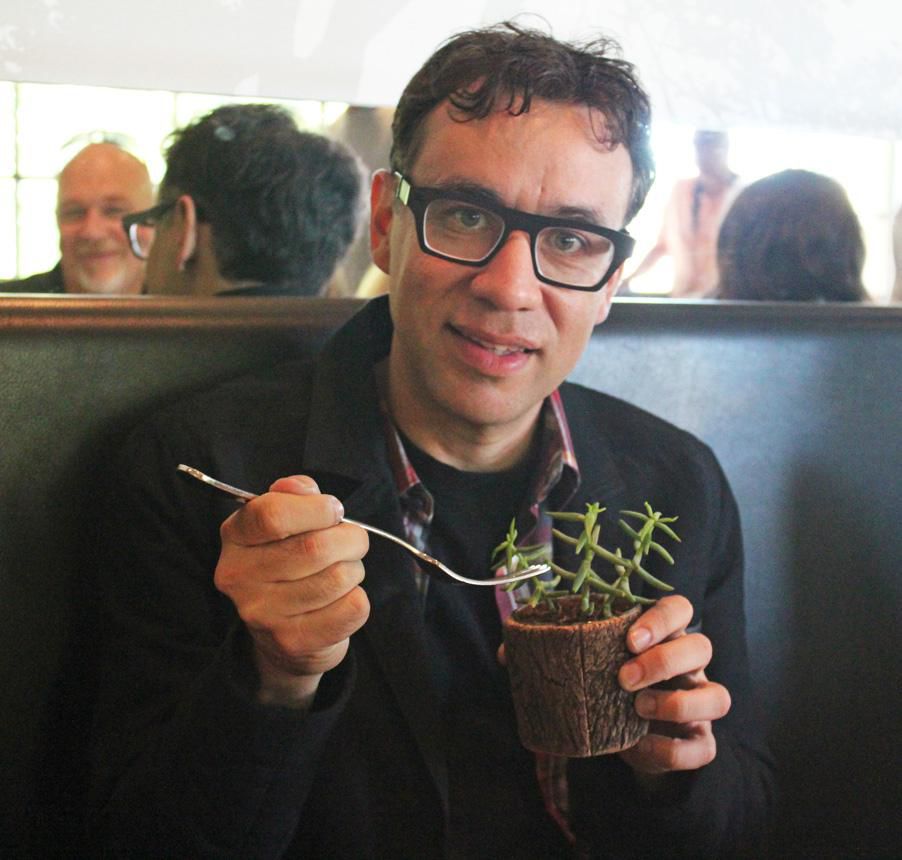 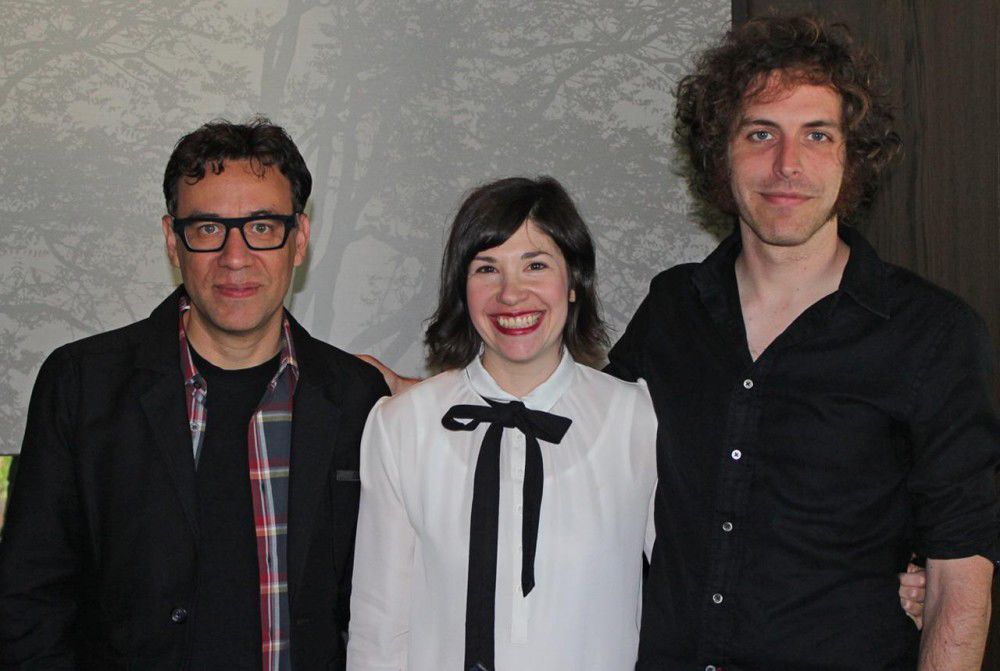 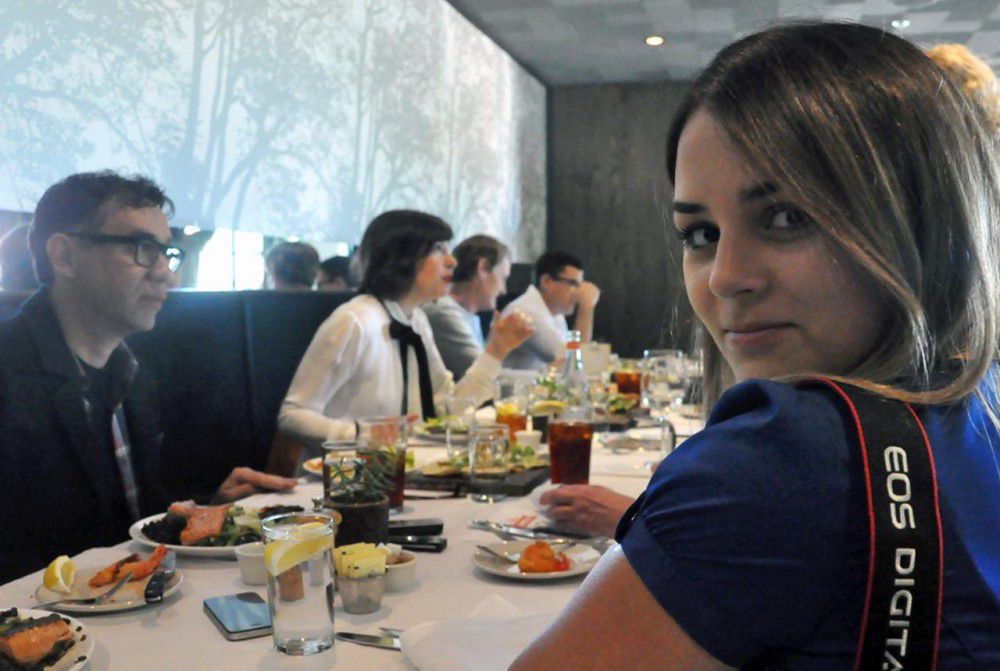 On her second to last day at OPB, intern Lucila Cejas Epple got a plumb assignment: covering a media event for the TV show "Portlandia." This allowed her to rub elbows with the shows costar Fred Armisen. Heres her account.

The day before I finished my summer internship at OPB, I was sent to the location where an episode of Portlandia was being shot. I was told by the events organizers I could not photograph or film anything on set, and that I would have a chance to take pictures of the cast and crew in a "Q & A" lunch afterwards. All the information about the upcoming season was embargoed until January, so I felt there was not much I could cover to write an article about on my last day.

Portlandia is the brainchild of Fred Armisen, Carrie Brownstein and Jonathan Krisel, a New York University film school alum who is also the director of the series. They are currently filming their third season, and they recently won a Peabody Award and are up for a few nominations in the upcoming 64th Primetime Emmys.

They took the press out for a delicious lunch. Fred, Carrie and Jonathan were there, and so were Kyle MacLachlan and Executive Producer Andrew Singer from Broadway Video. It was a very casual setting, and we all got to mingle and take photographs of the stars. When I got my chance to sit by Fred, a reporter from The Oregonian was sitting next to me. She interviewed him for 10 minutes and asked every question I wanted to ask him and more.

All of the sudden, I panicked. I thought to myself: "Am I going to ask the same questions? Should I try something new? Think fast!"

When it was my turn to speak, I was terrified. Below is a transcript of our short but sweet conversation. And it was all in Spanish.

Lucila: I'll only bother you for a couple of minutes. You have a plate full of food in front of you.

Fred: I don't care. Where are you from originally?

F: (in Spanish from here on) Well, can we do this in Spanish then?

F: Is this for Argentina or for here?

F: Oh good! Well, however you want it, it does not matter. Where are you from, Buenos Aires?

L: Of course. Do you like it in here?

F: I love it. You know what? My mom is from Venezuela and she came to visit for the first time last week.

L: A ha! I have been meaning to ask you where you were from, because your characters are so flexible. You can play any nationality.

L: And I always wondered, 'Where is he from? Where is his family from?'

L: And you were raised speaking in Spanish?

L: I have a daughter and I still cannot explain to her why she should learn it, but I know one day she'll get it like you did.

F: You should teach her Spanish.

L: Of course, only Spanish. And what do you like about Portland?

F: I love that it is all green and rainy. I just love rain.

F: I just really love rain. I love wearing jackets. I love the music and the buildings; they just look so square and strong. Very resistant.

I also love the food, the people and the bridges.

L: The bridges? Which one is your favorite?

F: Because it is like a secret. It is a secret bridge that will take you to the city in an instant. I love everything here because it is a city, but it is still not that big. And I have my friend Carrie who is from here. She is the reason I came to Portland, and little by little we created this show.

L: So to do character research, do you guys go to the street, cafés, just to see how people dress and talk?

F: Yes, but you only need to go on one car ride and in just one day you can see everything. One, two, three, four, all together. Moustaches and bicycles.

L: All the people that don't live here and watch Portlandia tell me, 'Come on, it is not like that in there.' And I say, 'No, sometimes it is worse.'

Just like you, Fred Armisen. Who would have guessed he was highly proficient in Spanish? I have met many Americans who were raised by a Spanish parent and only a couple had such proficiency at his age. He was warm and charming, and he was even funny in another language, which isn't easy. My summer internship was like a big delicious cake, and meeting Fred was the icing on top.

Season 3 premieres in January on the cable network IFC