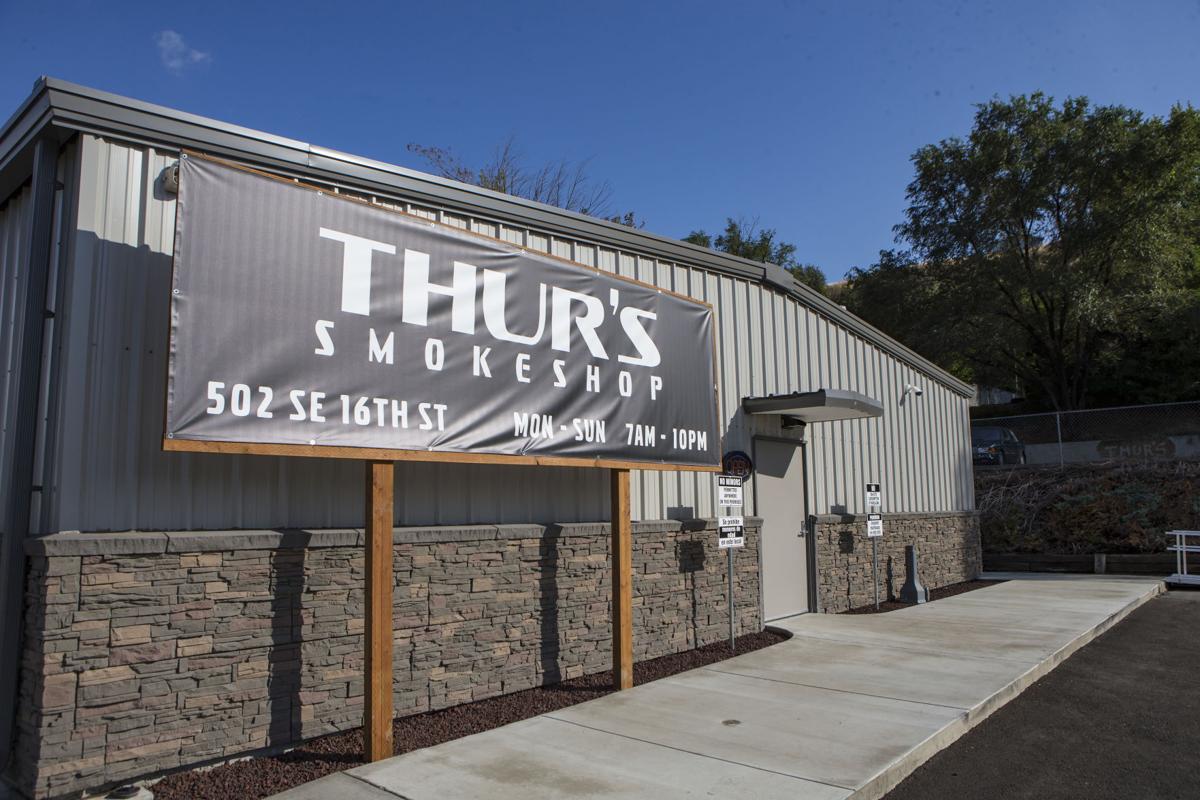 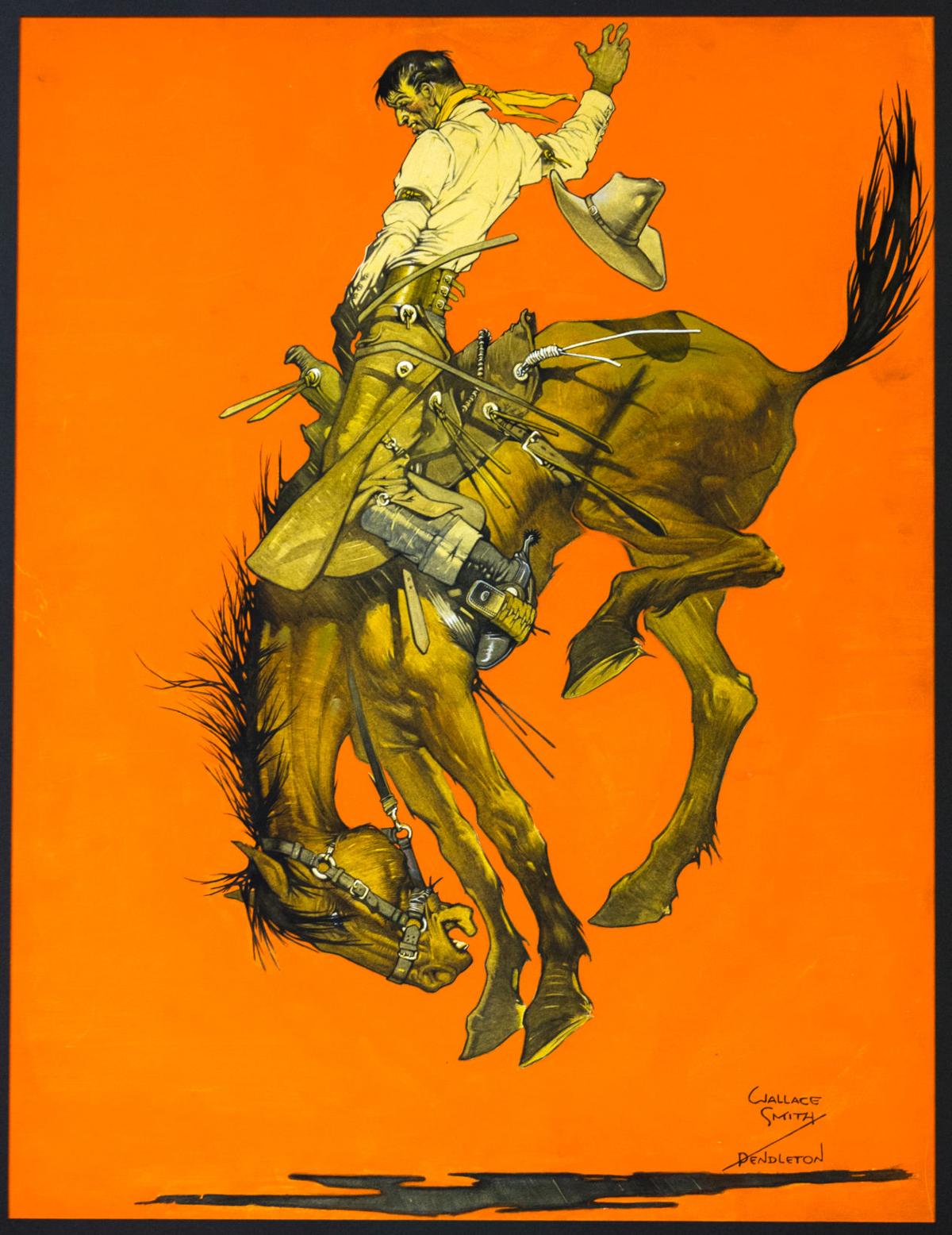 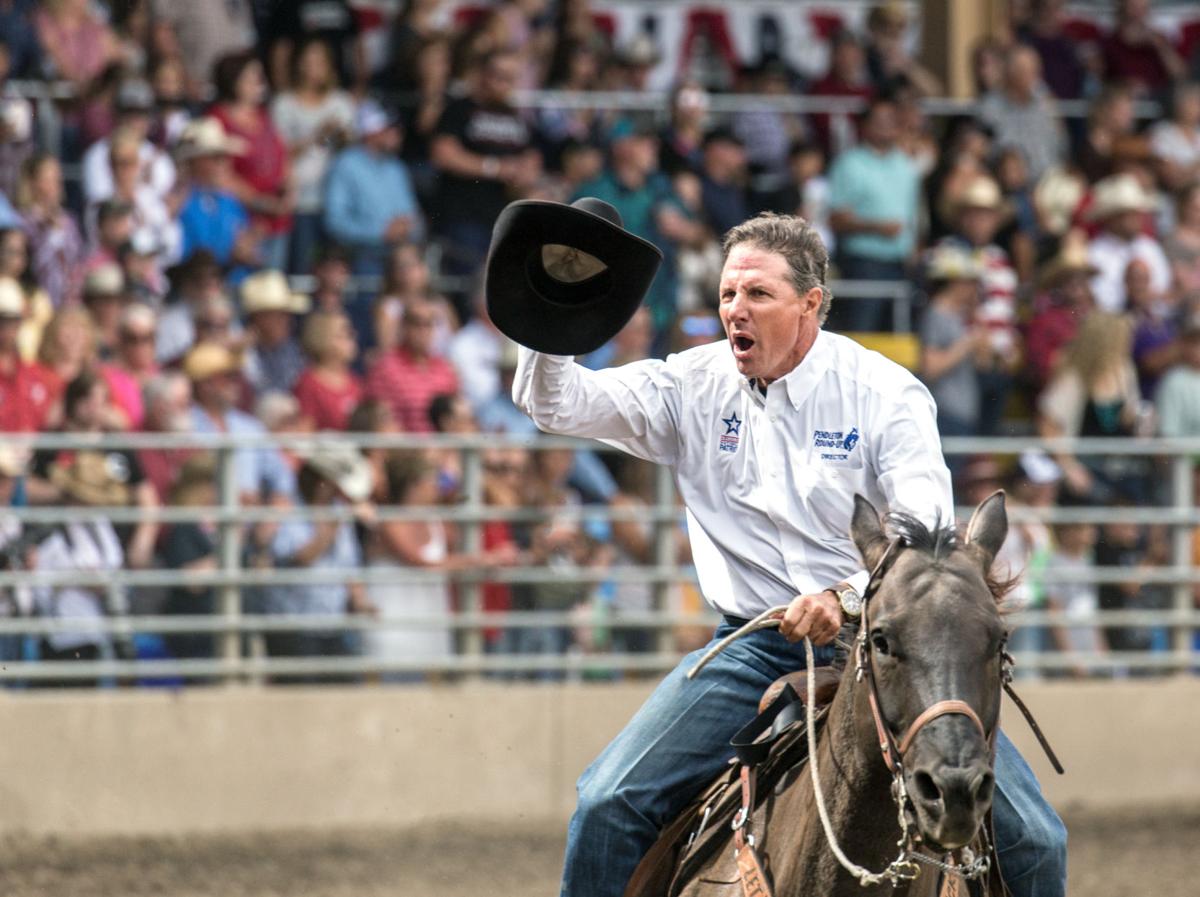 Dave O’Neill, president of the Pendleton Round-Up Association, races around the arena during the opening moments of the rodeo.

Dave O’Neill, president of the Pendleton Round-Up Association, races around the arena during the opening moments of the rodeo.

PENDLETON — Artist Wallace Smith likely would have raised his eyebrows in surprise had he caught sight of a poster hanging recently in a Pendleton marijuana store.

Smith, a journalist and cartoonist who died in 1937, sketched the bucking horse that eventually became the iconic image of the Pendleton Round-Up. The colorful drawing showed a bronc in mid-buck and a cowboy riding, his hat flying and his right arm stretched high for balance. The image is now the rodeo’s trademarked logo.

The banner in Thur’s Smoke Shop that might have brought consternation to Smith featured a similar bronc, though the horse had smoke drifting from its nostrils and the slogan “Let’er Burn” positioned directly beneath.

“It created quite a stir among board and community members,” O’Neill said. “There was disbelief that there would be such blatant disregard for its use.”

It got worse. O’Neill and Nick Sirovatka, the Round-Up director who chairs the trademark committee, looked at the shop’s Facebook site and found a profile image showing a drawing of a bucking horse with a mane and tail of cannabis leaves and smoking what looks like a joint. The rider clutches a bong in one hand and a vape pen in the other. The phrase “Let ‘er Burn” appears below. As of Monday, the online image remained.

The sighting brought further consternation. Not only is the bucking horse trademarked, but so is the phrase “Let ‘Er Buck.” The slogan is frequently altered and it’s difficult to ride herd on a twist of a phrase. But the bucking horse is a different matter. O’Neill paid Thur’s Smoke Shop a visit to voice his displeasure. He explained that the bucking horse is registered with the U.S. Patent and Trademark Office and is thus protected.

The Round-Up paid Wallace Smith $250 for the bucking horse drawing, registered it in 1925 and started using the image as a logo.

The smoke shop owner promised to remove the banner and O’Neill thanked him. He said last week that he planned to follow up with a cease-and-desist letter. A visual inspection on Monday showed no sign of the poster.

O’Neill thinks the incident, rather public because of the media exposure, is a teachable moment.

Trademark infringement is something the Round-Up deals with regularly. The association engages two law firms to guard its registered trademarks. Sirovatka said modifying an image to be slightly different from the registered image won’t protect one from trademark law if the image is confusingly similar to the original.

“Trademark law helps address the situation if someone is very obviously trying to capitalize on the momentum and impact of our brand and is just changing it a little bit trying to skirt around the rules and regulations,” Sirovatka said.

“The bucking horse in these images represents our organization and our community,” O’Neill said. “It’s up to us to make sure it is used properly and with our permission. The image is very valuable, not just because it is our community’s and our organization’s icon, but it tells our story. We don’t want to dilute its use.”

“We’ve granted use to a lot of civic groups for a lot of things,” O’Neill said. “Once we grant permission, we make sure they use it properly with the right images and right files, the right color schemes, the right details and the right font.”

O’Neill said the association hasn’t taken anyone to court yet even when “a major apparel company” used the bucking horse. He declined to identify the company, saying the misuse had been resolved.

“The court has never had to rule one way or another,” he said. “If we can’t resolve through letters and phone calls, if there’s any defiance, we get our lawyers involved.”

That’s usually enough even when the offender is online.

“I give them the registration number and say go to the U.S. Patent and Trade Association website and see that we have that registration,” Sirovatka said. “More often than not, we’ll get an ‘Oh, my gosh, I didn’t even know.’ Most of them are very apologetic and will pull the offending item out of their online store and just end up sending an ‘I won’t ever do it again’ email back to me.”

Some possible infringements are noticed and ignored if they are deemed innocuous, such as a local coffee business called Pendleton Ground-Up.

“Everybody in town knows where they are going with that or where they got that, but is it really in our best interests to try to address it?” Sirovatka said. “It tiptoes along that ‘confusingly similar’ line.”

For those interested in getting permission to use the bucking horse, there is a process. Call the Round-Up office to get started. The trademark committee considers requests and usually makes a determination within four days.

O’Neill said the decision to grant use isn’t made lightly.

“We spend an enormous amount of focus on the brand,” O’Neill said. “It’s not just the monetary value, it’s our image. It tells a great story. We don’t want it diluted.”

How has Cuba managed to flatten the curve?

Betsy DeVos pressed on if schools should follow CDC guidelines