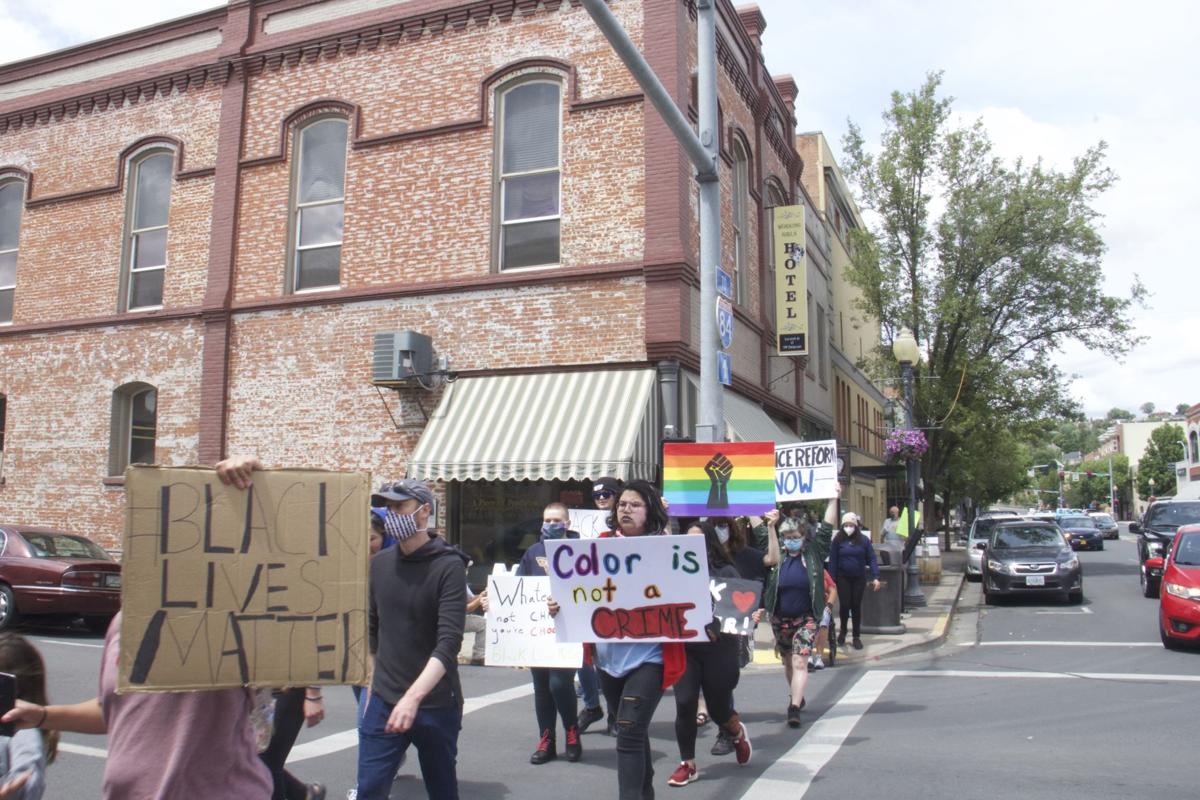 Protesters chant the names of Black Americans killed by police as they cross Southwest Emigrant Avenue and march through downtown Pendleton on Saturday, June 13, 2020. 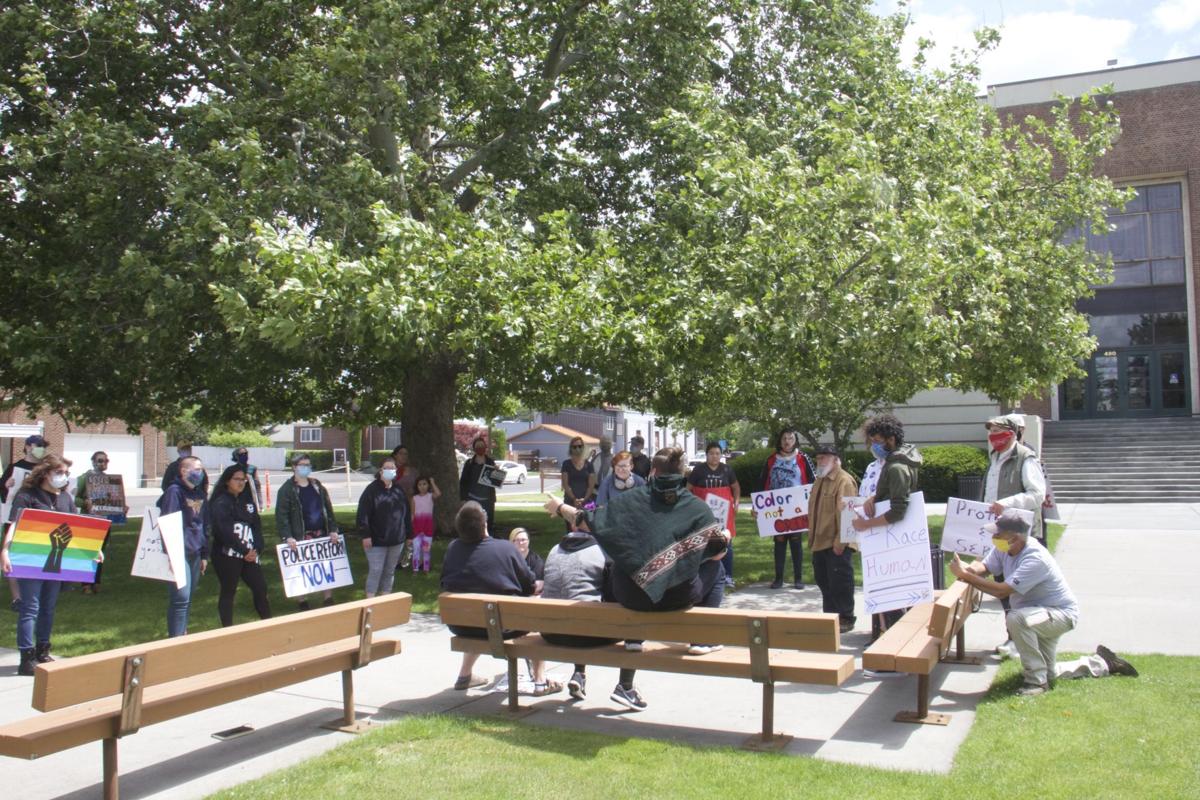 Protesters gather around outside Pendleton City Hall on Saturday, June 13, 2020, to discuss their own experiences with racial injustice and police violence. The protest was attended by about 30 local residents of varying ages, backgrounds and identities. 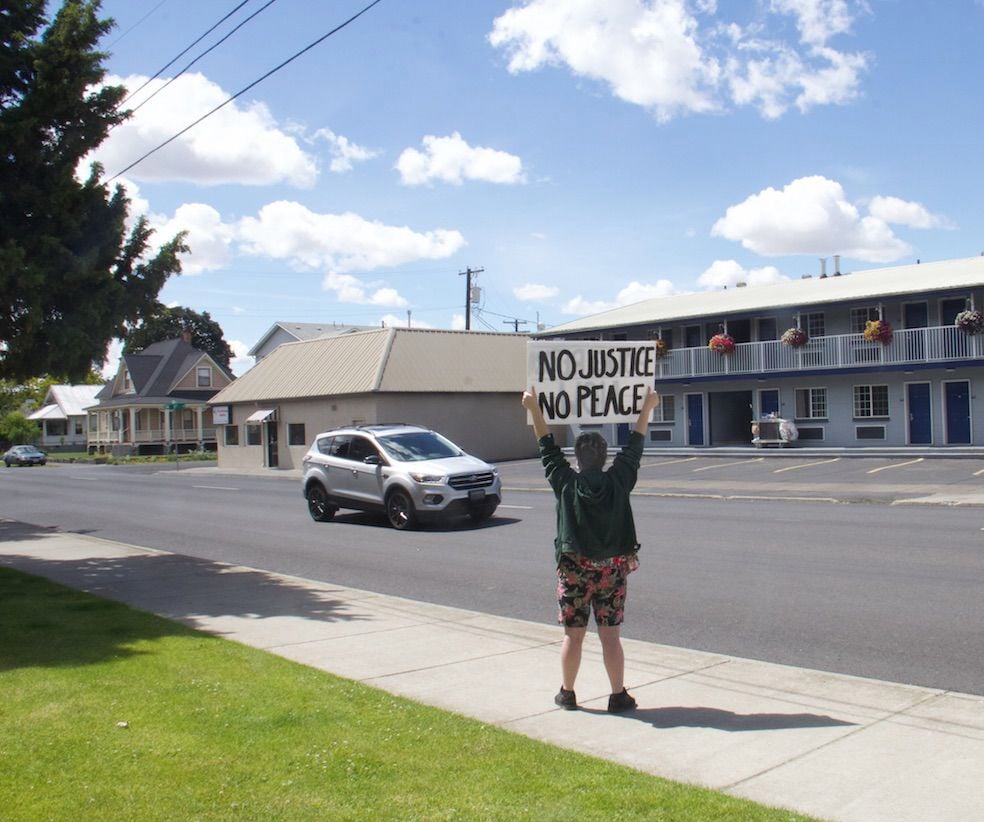 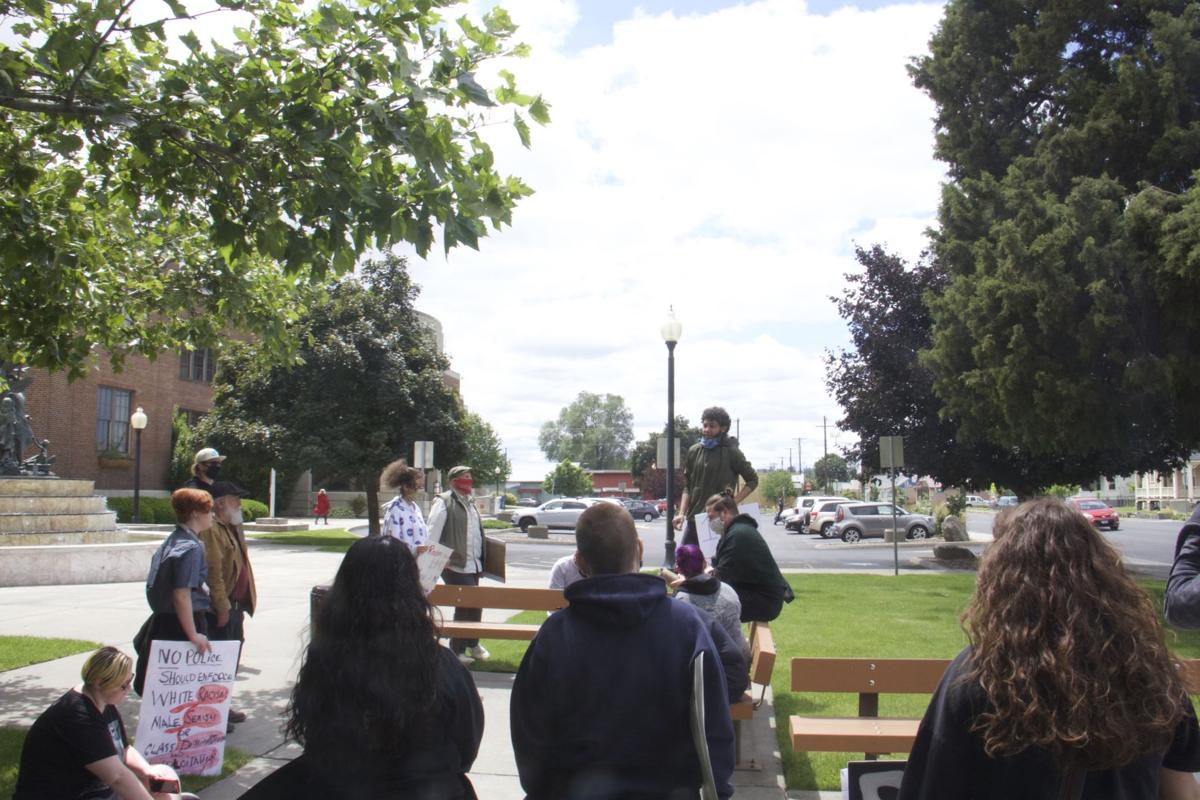 Nolan Bylenga, Democratic candidate for House District 58, stands on a park bench outside Pendleton City Hall to discuss the fight against racial injustice at a protest on Saturday, June 13, 2020. 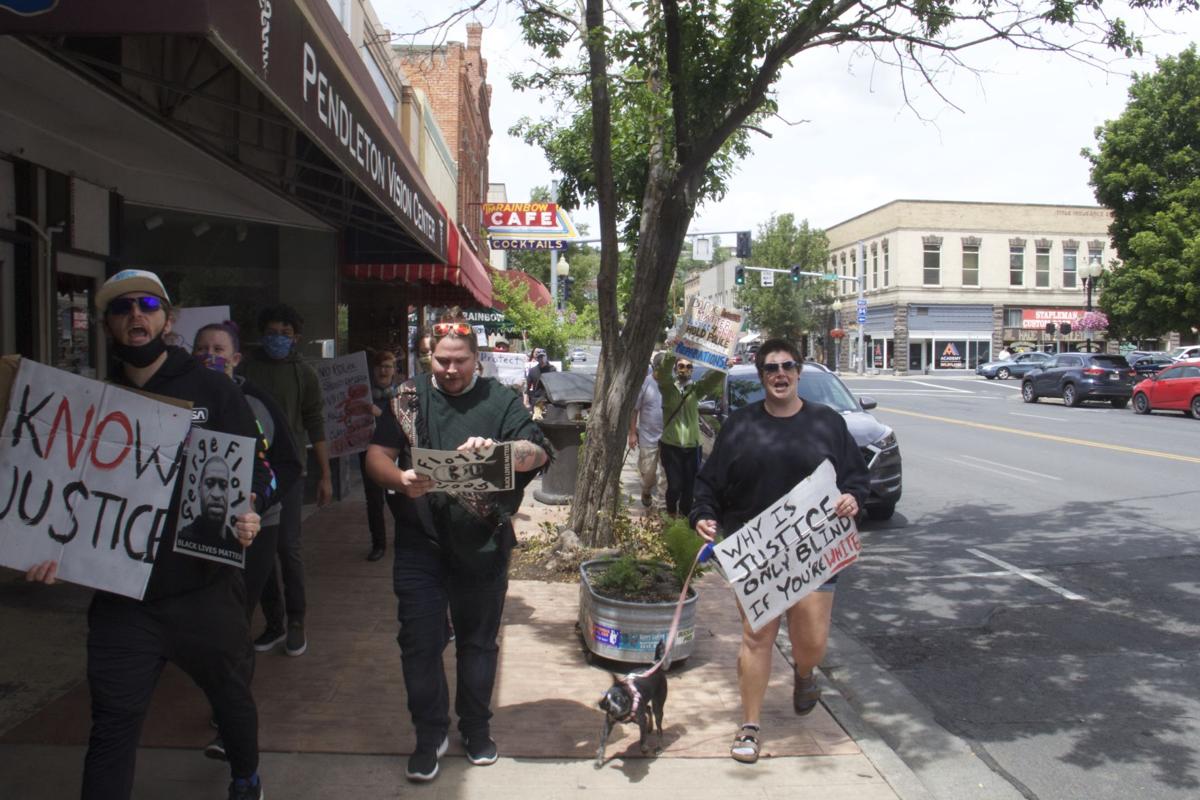 Protesters chant the names of Black Americans killed by police as they march through downtown Pendleton on Saturday, June 13, 2020.

Protesters chant the names of Black Americans killed by police as they cross Southwest Emigrant Avenue and march through downtown Pendleton on Saturday, June 13, 2020.

Protesters gather around outside Pendleton City Hall on Saturday, June 13, 2020, to discuss their own experiences with racial injustice and police violence. The protest was attended by about 30 local residents of varying ages, backgrounds and identities.

Nolan Bylenga, Democratic candidate for House District 58, stands on a park bench outside Pendleton City Hall to discuss the fight against racial injustice at a protest on Saturday, June 13, 2020.

Protesters chant the names of Black Americans killed by police as they march through downtown Pendleton on Saturday, June 13, 2020.

PENDLETON — A cold, rainy morning may have kept some would-be protesters at home on Saturday, June 13, but it didn’t stop about 30 local residents from marching through downtown Pendleton in another demonstration against racial injustice and police violence.

While the protest was about a quarter of the size of previous local demonstrations, its voices represented an intersection of the different generations and identities that have united nationwide in wake of the murder of George Floyd to call for an end to the institutional racism that allowed it to happen.

Prior to having that discussion, the group met at Pendleton City Hall around 1 p.m. and, as they did the weekend before, filed into a line with protest signs in hand and began marching east. However, this time the march went down Court Avenue to Main Street, and then cut south through downtown.

A handful of patrons sat outside eating lunch and watched as the protesters walked south, voices loud and in unison as they shifted from usual chants of “Black Lives Matter” or “George Floyd” to reciting name after name of Black Americans who were killed by police.

The group returned west on Frazer Avenue to city hall, where they circled up and opened the floor for people to step up and speak about their own experiences.

First to speak was Nolan Bylenga, a 22-year-old senior at Portland State University and graduate from Pendleton High School, who is also running as the Democratic candidate for House District 58.

Bylenga, who is half Black, is living in Pendleton for the summer due to school closures, but spent last week in Salem attending similar protests and joining discussions with state legislators.

“As much as we want to hold police accountable and such, a big part is creating dialogue with people, such as police as well,” Bylenga said in his speech to the group. “A lot of it, at least from my perspective, of the message we’re trying to push is anti-racism, anti-hatred. But also a sense of creating that dialogue so we can bring about reform.”

Bylenga also highlighted the need to build allies out of people rather than sowing division and pointed to an apology issued by the Salem chief of police during a meeting last week as a sign of progress to build off of.

Pendleton resident George Winter, 80, didn’t join in the march but followed Bylenga by speaking about his time as an activist during the Civil Rights Movement of the 1960s. In particular, Winter, who is white, told stories about volunteering for the Mississippi Summer Project in 1964.

“Anybody that wanted to fight racism was welcome,” he said to the group. “We did a lot of things that took lots of time and weren’t too exciting.”

The project’s purpose was to increase voter registration for Black Americans in Mississippi, which had the lowest percentage of registered Black voters in the country at the time, and also included building schools and other community resources to aid the state’s Black residents.

The movement brought in thousands of volunteers, many of whom were college students, and also resulted in violent backlash from white Mississippians. Over a thousand of the project’s volunteers were arrested, dozens of Black churches, buildings and homes were bombed or burned in retaliation, and at least a handful of activists were killed.

Winter recalled one of his own “exciting” stories of his car breaking down while driving through Ku Klux Klan territory, hiding in a cotton field alongside two friends in more than 100-degree weather and having to find a way to call for help when the nearest phone was at a klan hangout.

Ultimately, Winter highlighted the importance of connecting with the movement’s history of fighting for racial justice.

Destiny Chase, 25, a member of the Confederated Tribes of the Umatilla Indian Reservation, raised her voice on Saturday to discuss her experience of protesting at Standing Rock in 2016 and how the violence she witnessed has shaped her as an individual since.

“As they were spraying and tear gassing us — and beating us — they were smiling,” she said. “And after the stuff I experienced with police officers it made me really distrustful of all of them.”

Pendleton resident Jack Hess, 17, is a queer trans man and stepped forward from the group Saturday to note that although he faces discrimination for who he is, his white skin affords him protections that others don’t have.

“I’m queer, I’m trans, I have anxiety, I have depression,” he said to the group. “But despite all that, I am still white. And Black people and other people of color do not have that privilege.”

Jacob Rhodes, 25, lives in Pendleton and said his stance on social issues and disagreements with family members who voted for President Donald Trump have fractured those relationships. But as a white man committed to seeing positive change, those losses are worth the potential for progress.

“It is worth this fight,” he said. “I’ve lost a lot of my family and I’m going to keep on with this fight because this is way more important than the privilege of having a family of three other people that want something different.”

The residents organizing and attending the recent protests in Pendleton are staying committed to that fight and plan to march through the city each Saturday for the foreseeable future. Next weekend’s protest is planned from 4 to 6 p.m. and will meet at city hall once again.

Trump accidentally revealed a *lot* about his taxes