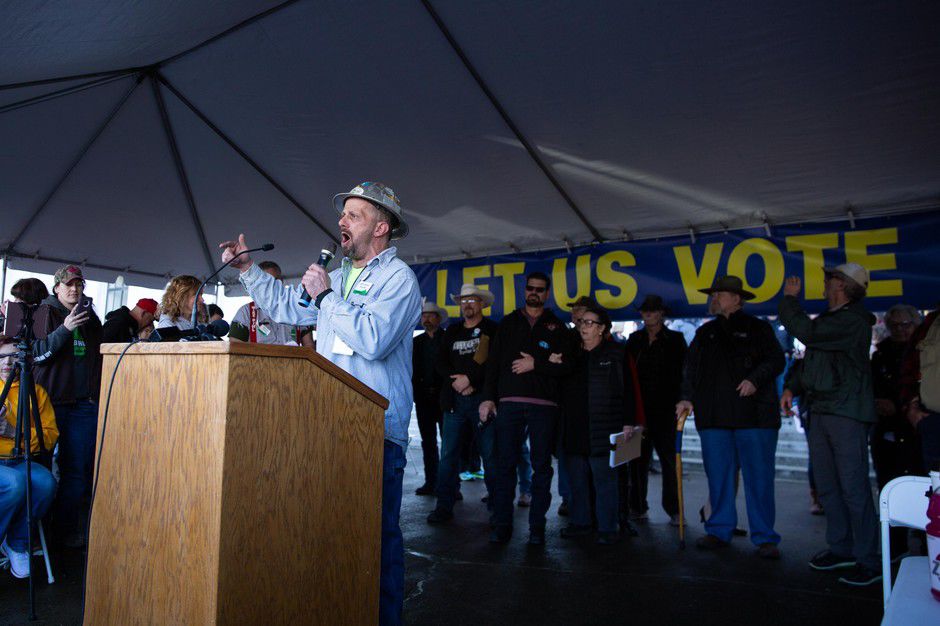 Timber Unity founder Jeff Leavy speaks at a Timber Unity rally at the Capitol in Salem on Feb. 8, 2020. The group is opposing cap-and-trade legislation aimed at reducing greenhouse gas emissions and demands, at minimum, the issue be brought to voters. 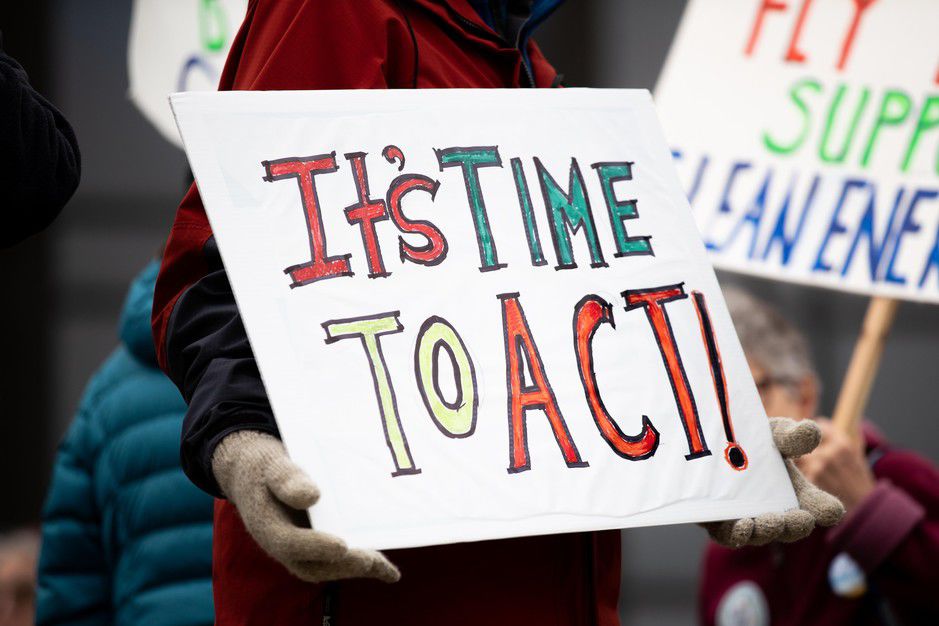 People gather on the steps of the Oregon Capitol in Salem for a rally for climate action on Feb. 11, 2020. 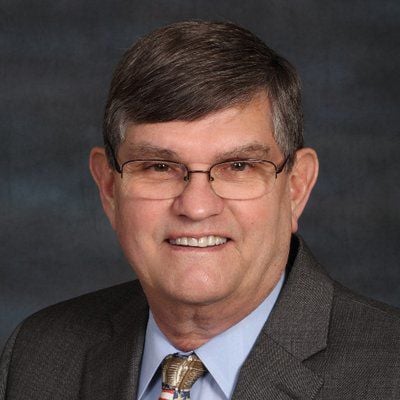 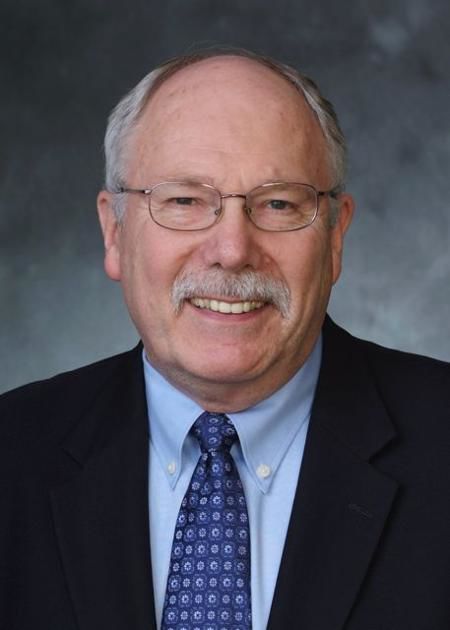 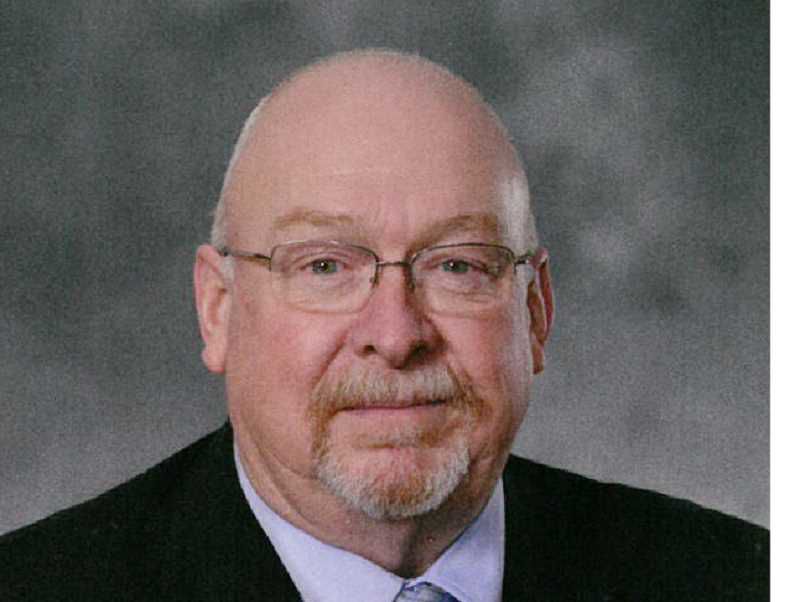 Timber Unity founder Jeff Leavy speaks at a Timber Unity rally at the Capitol in Salem on Feb. 8, 2020. The group is opposing cap-and-trade legislation aimed at reducing greenhouse gas emissions and demands, at minimum, the issue be brought to voters.

People gather on the steps of the Oregon Capitol in Salem for a rally for climate action on Feb. 11, 2020.

By a 3-2 vote, Democrats on the Senate Environment and Natural Resources Committee passed a set of amendments to Senate Bill 1530, loosening regulations on automotive fuels and addressing some Republican concerns as they did so.

The committee then passed the bill on to the Ways and Means Committee, where it’s slated to be considered in a subcommittee before a potential vote to the Senate floor as early as next week.

At the same time, Republicans railed against another bill, House Bill 4159, that would enact a similar policy. The bill, currently seen as a “backup” in case SB 1530 stalls, was voted out of a House committee on Thursday without ever receiving a public hearing.

The tactic allows the bill to survive a legislative deadline. But it angered Republicans on the House Committee on Energy and Environment, who left a hearing in protest of the maneuver.

Adding to the tensions, a handful of trucks circled the Oregon Capitol throughout the afternoon, their horns blaring in apparent protest of the cap-and-trade proposals.

Thursday’s events highlighted the extent to which the climate change legislation has dominated attention in the Capitol, less than two weeks into a legislative session that must end by March 9.

The issue has inspired remonstrations on the floor of the House and frequent threats by Republicans in both chambers to walk away from the session to block the bill, as GOP senators did last year. As the bill makes its way toward a possible Senate floor vote, the realities underlying those threats will be put to the test.

In broad strokes, SB 1530 would set a cap on greenhouse gas emissions from the transportation, utility and manufacturing sectors, and lower allowed emissions over time. Under the bill, nearly 100 entities would be required to obtain permits for each ton of emissions.

Slightly less than half of those credits would be sold at auction when the bill is fully underway, according to the governor’s office. The remaining credits would be provided free via various mechanisms.

Exactly how much money the bill might raise via auctions remains unclear. The Legislative Revenue Office was still working on a detailed revenue impact statement as the bill moved forward Thursday, but the number is likely to be well below the $1.3 billion last year’s carbon bill, HB 2020, was expected to bring into state coffers upon taking effect.

At the same time, the bill is expected to create roughly $21 million in new costs during the current budget year — money that would likely need to come from the general fund.

Champions of cap and trade say it is the best way to meaningfully address climate change at a crucial time. While Oregon’s greenhouse gas emissions are negligible on the global scale, they believe the state can beat a path for other small or mid-sized states contemplating a climate change policy.

After spending Friday touring areas in Eastern Oregon impacted by last week’s record flooding, Gov. Kate Brown said the state’s latest natural disaster is another example of why action like cap and trade is essential sooner rather than later.

“I think if this event taught us anything it’s that our climate is rapidly changing and we need to take action,” she said. “This is a market-based approach and we’ve worked hard to make sure the approach allows us to invest in our underserved communities, particularly our rural communities and tribal communities.”

Democrats also say the system will allow Oregon to achieve strict benchmarks for reducing its greenhouse gases. When the bill takes effect, the governor’s office expects it will regulate roughly 55 million tons of emissions (about 84% of the state’s total emissions).

Critics of the bill argue that this regulatory structure will wreak havoc on the economy by raising prices on fossil fuel use, prompting businesses to close or move out of state.

Before passing the bill along Thursday, the Senate committee amended the bill in some notable respects — including provisions meant to address critics.

Those changes were not enough to placate Republicans, who had complained loudly this week that Democrats are jamming the policy through.

Key to Republican concerns Thursday was the release on Wednesday of new amendments to the bill. The changes were relatively few, but were tucked into a 177-page draft that left most parts of the proposal untouched.

“Democrats dropped a 177-page amendment on cap-and-trade less than 24 hours before a vote in committee,” the Senate Republican Caucus tweeted Thursday. “Conspiracy.”

TONIGHT, Democrats dropped a 177-page cap & trade amendment, leaving just HOURS before committee tomorrow to understand this horrible policy that will impact every corner of the state. Cap & trade isn't about the environment - it's a money grab for Democrat special interests. pic.twitter.com/TEsSXwPR2e

State Sen. Alan Olsen, R-Canby, vice chair of the Natural Resources Committee, walked out of a floor session of the Senate on Thursday morning, announcing he needed to read through the amendment.

“I have but a few short hours to read this, digest it, so I can be a pertinent member of committee,” Olsen said. “So I would ask to be excused from this floor session so I can go do my work.”

In fact, some of the changes were inspired by — though not identical to — provisions Republicans had requested, including a policy to encourage governments to purchase electric vehicle fleets.

Other amendments were geared toward the group Timber Unity, a collection of truckers, loggers, farmers and others who staged a large rally at the Capitol last week.

A more meaningful change altered a key topic of contention: how automotive fuel is regulated under the proposed system.

The amendment split the state into four geographic tiers, rather than three. Fuel in the Portland area would be regulated beginning in 2022, followed by 17 western counties in 2025, and Coos and Curry counties in 2028. The cities of Bend and Klamath Falls would also see fuel regulations in 2028.

This four-tiered structure was proposed by Sen. Arnie Roblan, D-Coos Bay, who was a holdout on last year’s cap-and-trade bill but has helped craft SB 1530. Roblan has said repeatedly he is worried about raising fuel prices in his rural district.

The new regulatory scheme was viewed as a step back from some environmental groups, who nonetheless support the Legislature passing the bill this year.

Prior to a final, predictable vote Thursday, the committee took up a handful of amendments from Republican members, rejecting them all on a party line basis.

Olsen, in a lengthy speech, called the cap-and-trade proposal a “massive redistribution of wealth” and “social engineering project.” Sen. Lynn Findley, R-Vale, said the proposal was anathema to voters in his massive Eastern Oregon district, which spans roughly a third of the state.

“The fact that we continue to do major things without their approval, without even letting the voters have a chance to have a say on this, I think is a huge mistake,” Findley said.

Democrats, meanwhile, stressed the urgency of the issue, repeatedly bringing up future generations who would be impacted by ongoing climate change. Roblan, as he has repeatedly, reflected on students he met last year while touring schools around the state.

“The anxiety I saw on kids today is palpable, and totally different to anything I’d ever seen before,” said the former high school principal. “It makes me worry about a generation of kids who are worried about their future and don’t think adults are doing anything to help them.”