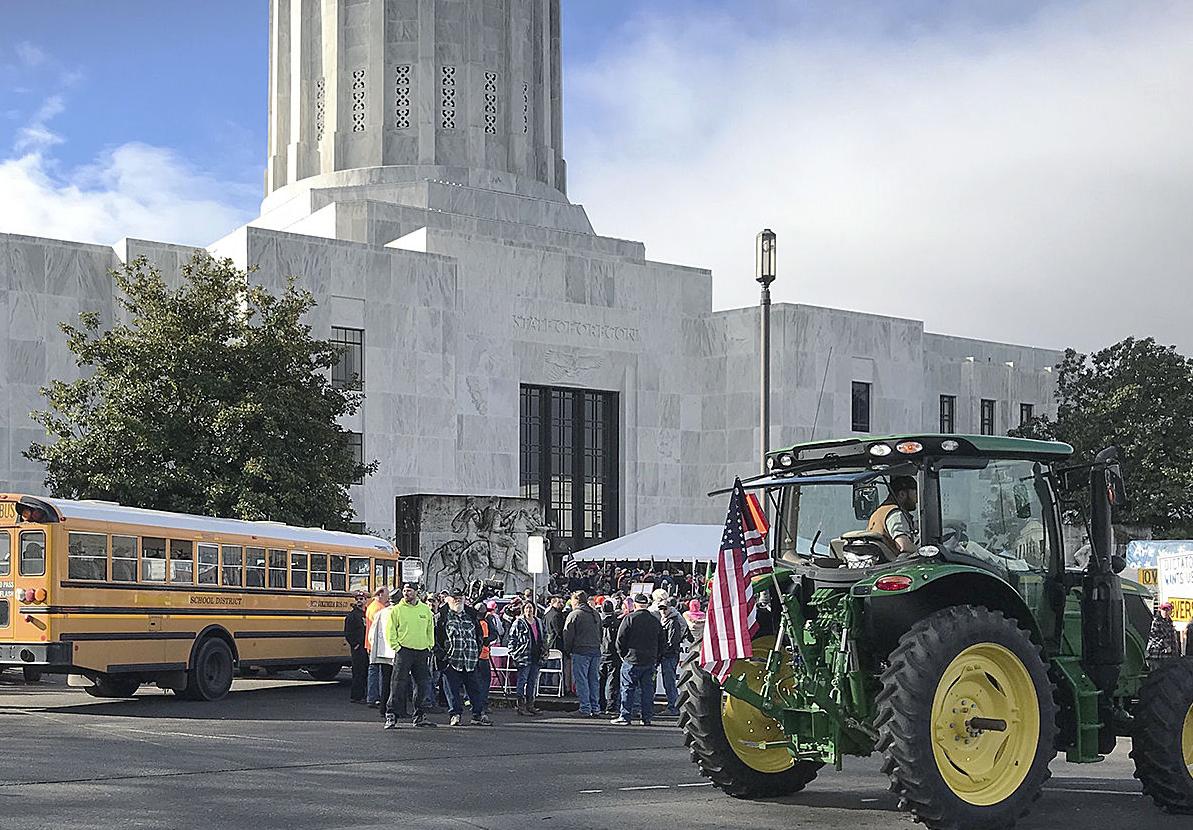 Timber Unity supporters and members congregate outside the Oregon state Capitol to protest a cap-and-trade bill they say threatens the rural economy. 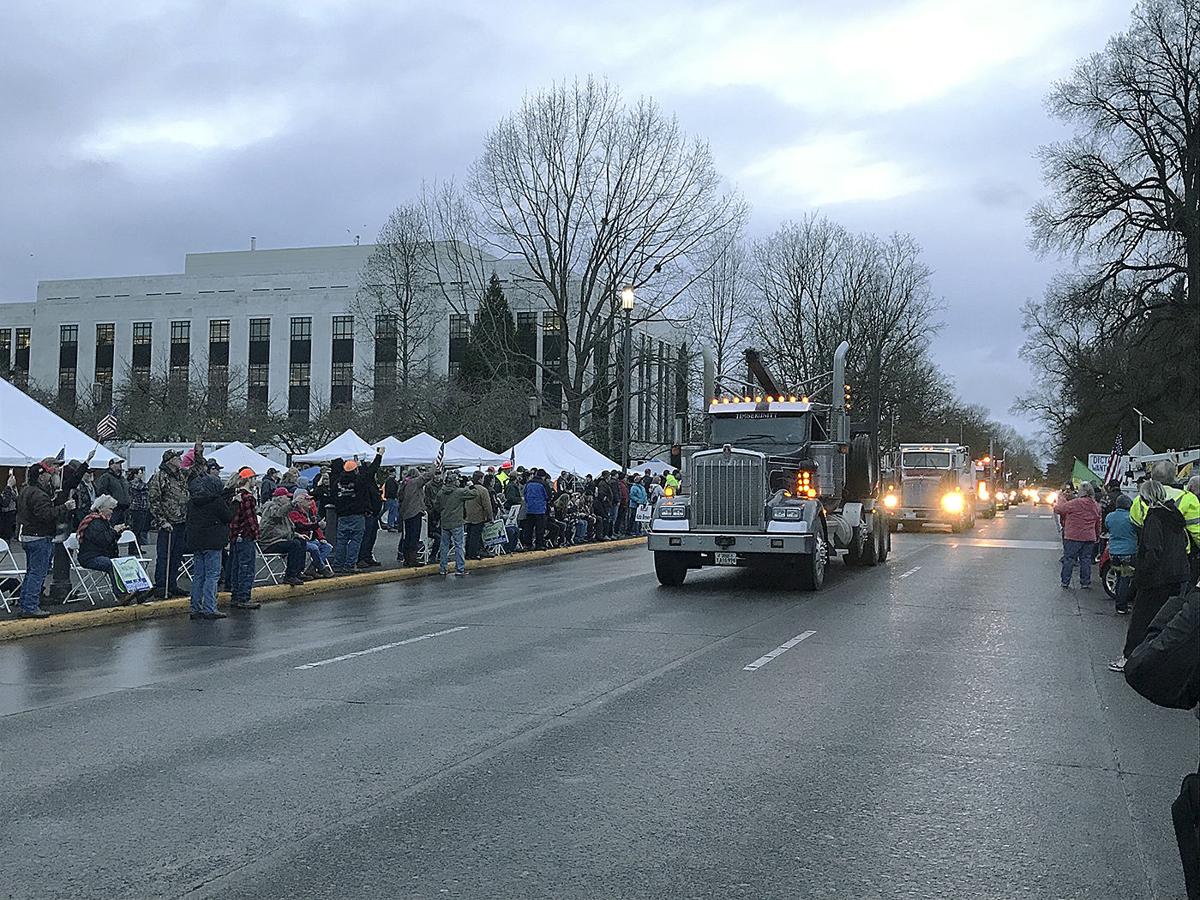 Timber Unity supporters greet the convoy of trucks as it arrives this morning at the Oregon state Capitol. Traffic on Interstate 5 was backed up as the big rigs arrived in Salem from all directions. 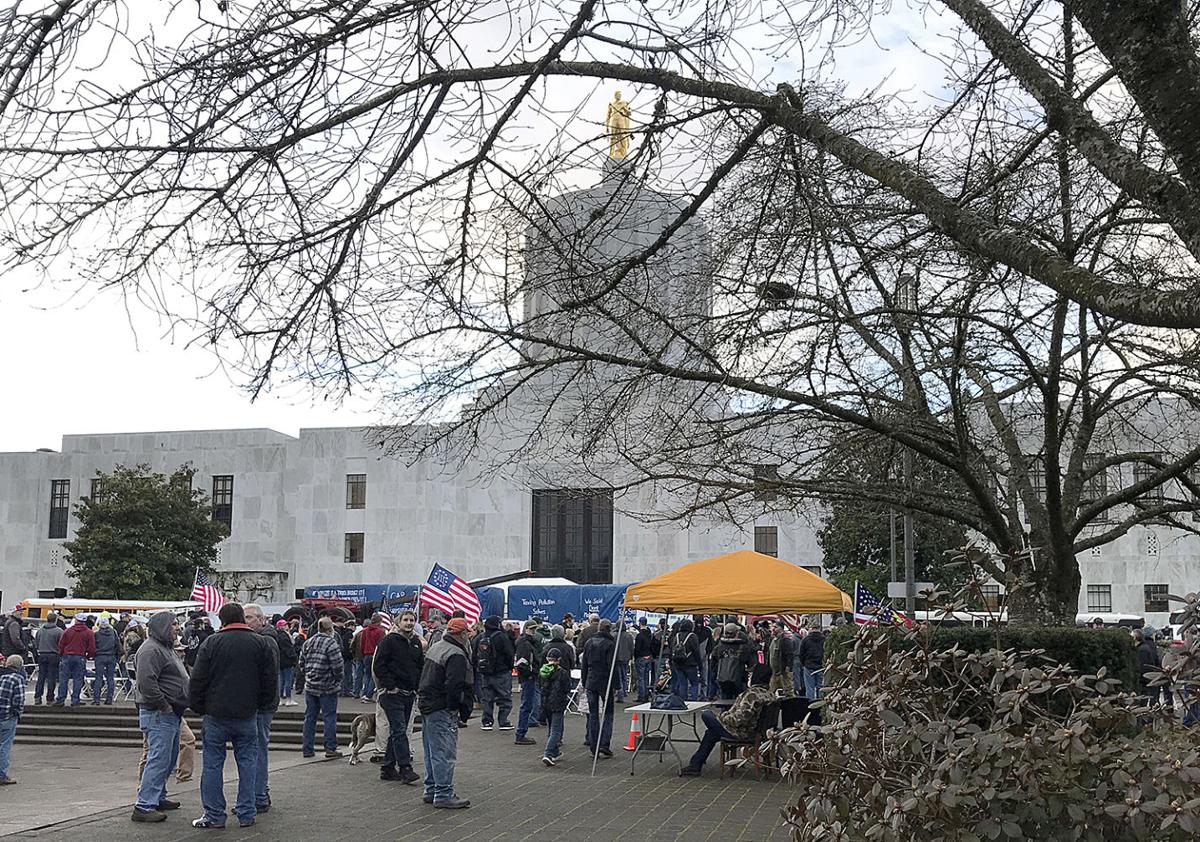 Timber Unity supporters at the Oregon state Capitol prepare for the start of the group's speeches at 10 a.m. 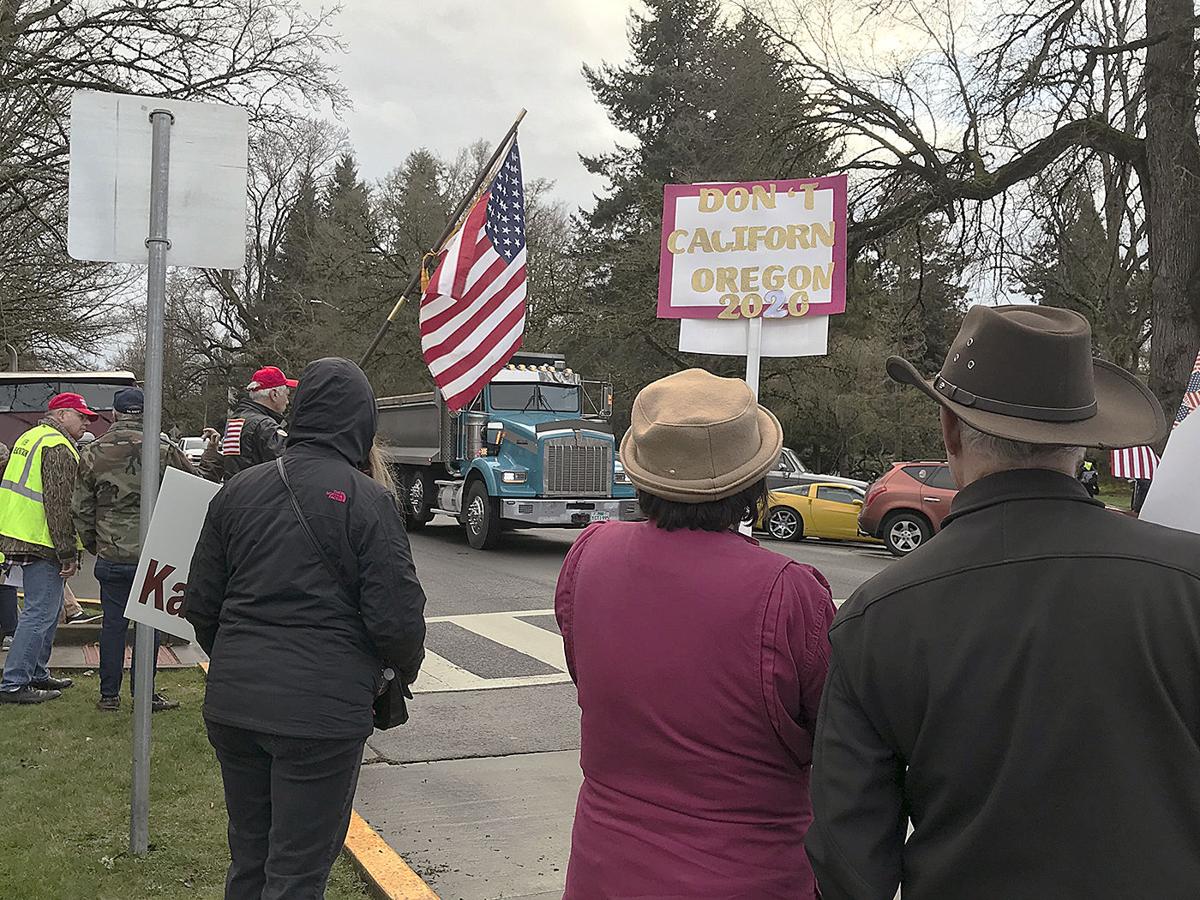 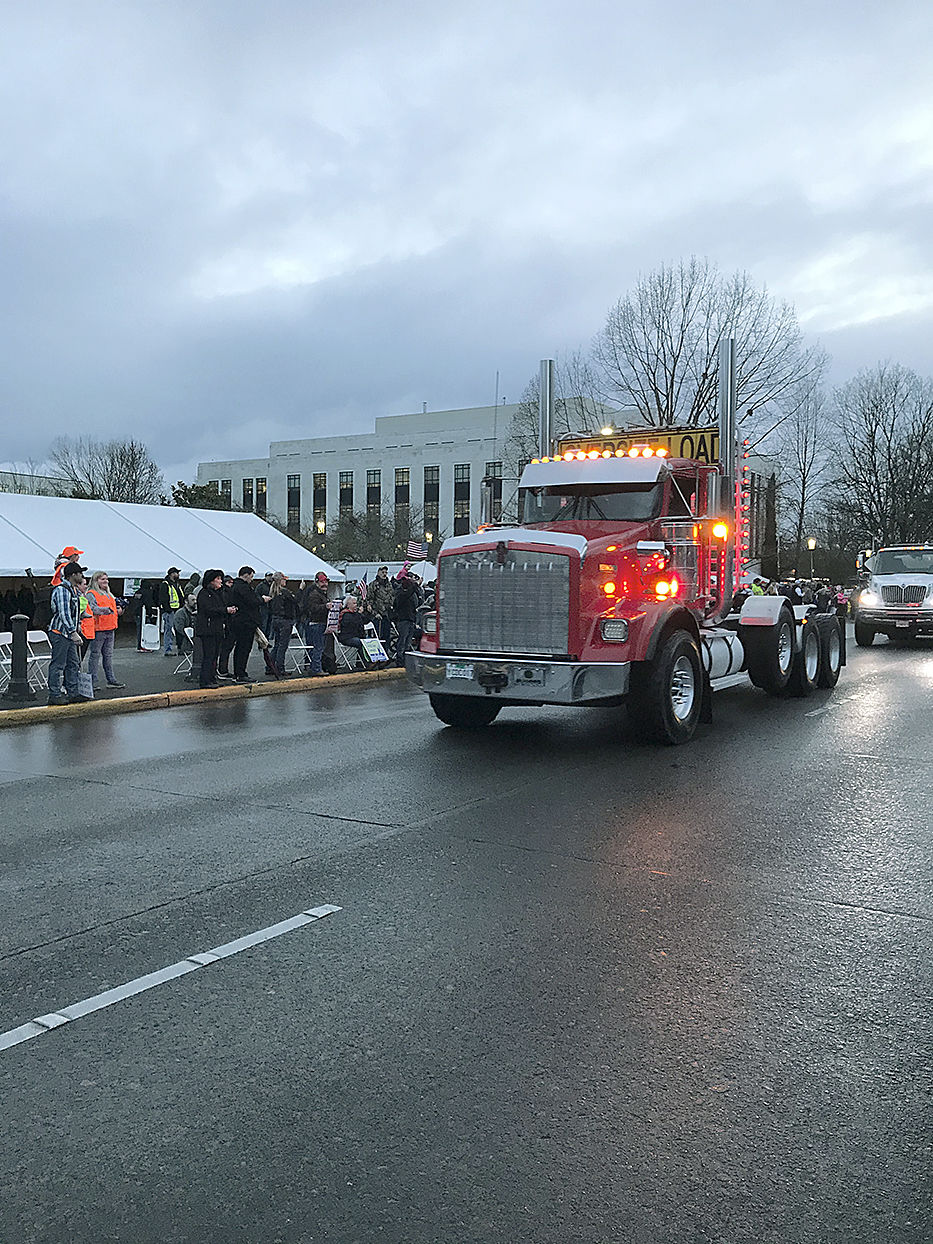 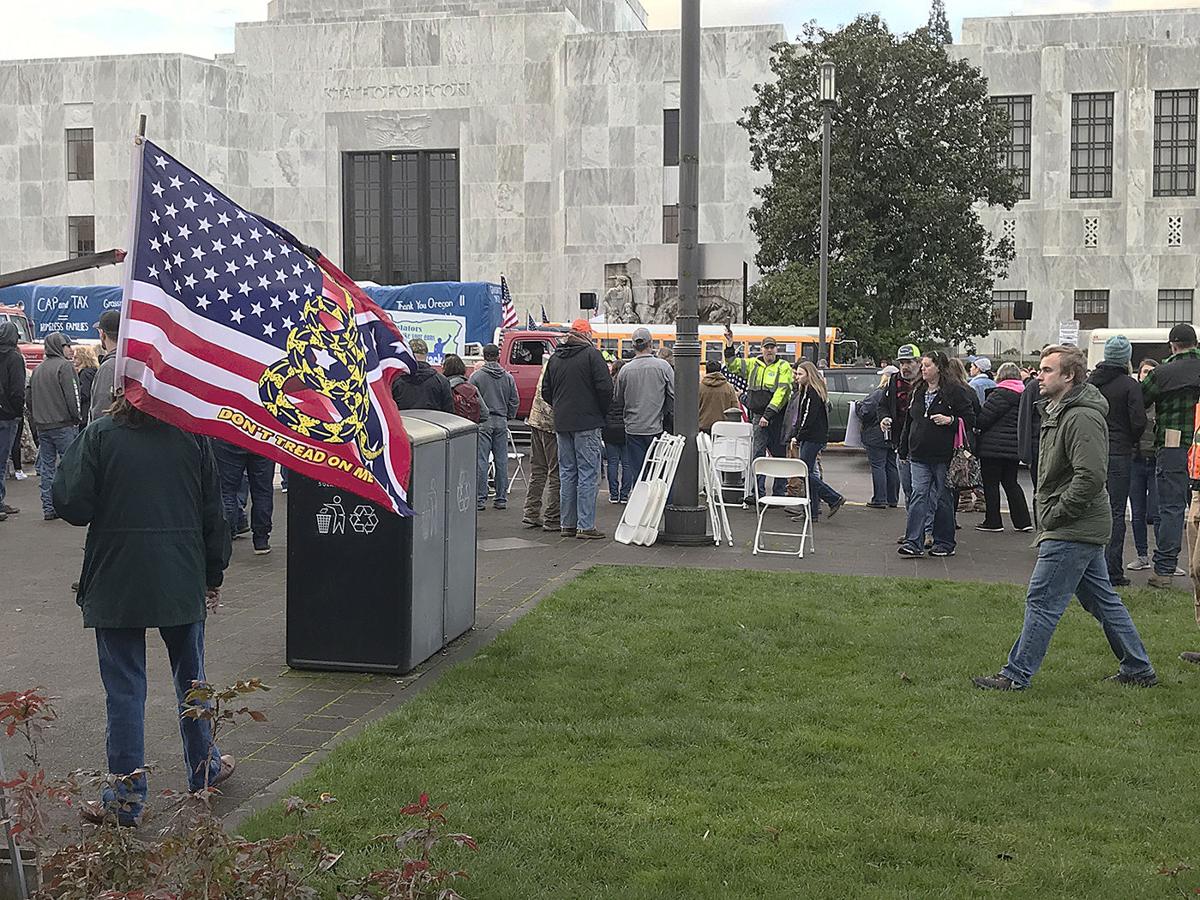 Timber Unity supporters at the Oregon state Capitol this morning protested SB 1530, the cap-and-trade bill that would increase fuel prices across the state. 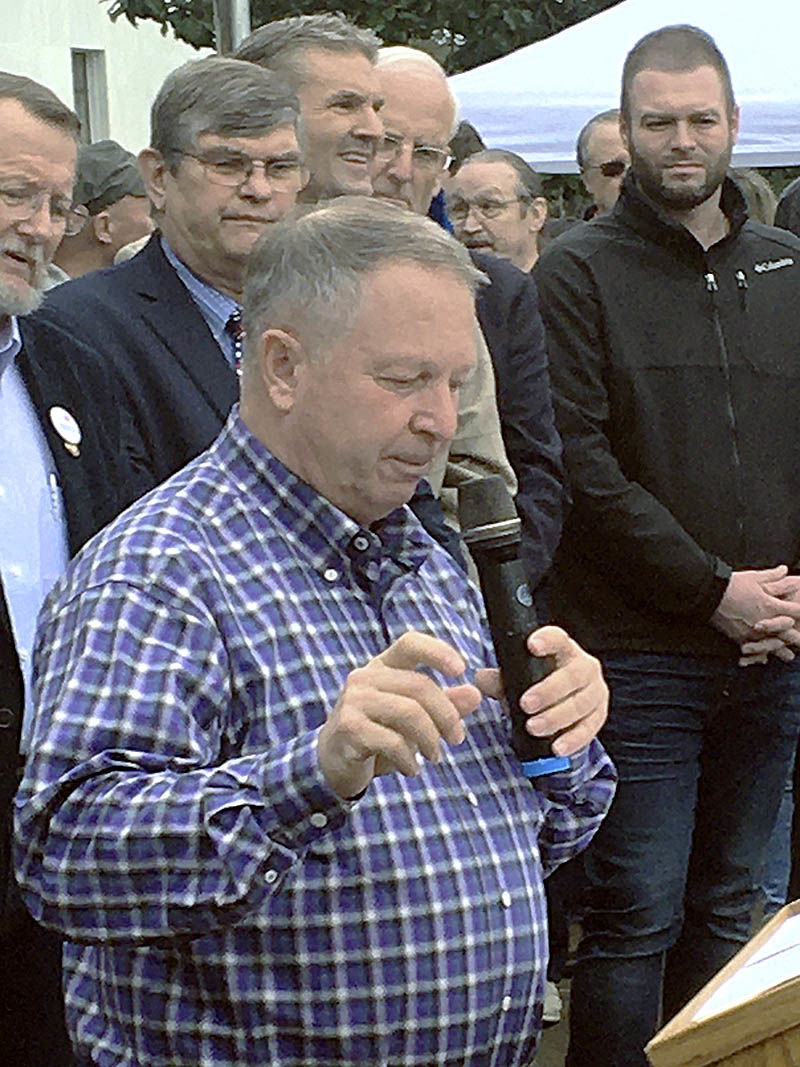 Thousands of Timber Unity supporters and members gather in front of the state Capitol to protest the cap-and-trade bill under consideration in the Oregon Legislature. The bill would increase the price of fuel and damage the rural economy, they say.

Timber Unity supporters and members congregate outside the Oregon state Capitol to protest a cap-and-trade bill they say threatens the rural economy.

Timber Unity supporters greet the convoy of trucks as it arrives this morning at the Oregon state Capitol. Traffic on Interstate 5 was backed up as the big rigs arrived in Salem from all directions.

Timber Unity supporters at the Oregon state Capitol prepare for the start of the group's speeches at 10 a.m.

Timber Unity supporters at the Oregon state Capitol this morning protested SB 1530, the cap-and-trade bill that would increase fuel prices across the state.

SALEM — Thousands of Oregonians from across the state lined the streets and converged on the steps of the Oregon Capitol Thursday to protest legislation they say would decimate the rural economy.

Sign-waving protesters met with Gov. Kate Brown and legislators and filled hearing rooms with their testimonies.

More than 1,000 trucks, tractors and other large vehicles circled the Capitol for hours, their horns blaring. They had come to protest cap-and-trade climate legislation, Senate Bill 1530, which they say could crush their jobs and livelihoods.

The protesters, working-class Oregonians who are part of a movement called Timber Unity, were gathered to stand against SB 1530, also known as cap and trade, a bill to cut carbon emissions in an effort to slow climate change. Protesters say they fear the bill will lead to higher fuel prices, which would hurt truckers, loggers, farmers and others who live and work in rural parts of the state.

“I don’t like division between rural and urban areas,” said Rachel Abbott, 27, who works in the hospitality industry and was raised on a farm near Sheridan, Ore. “This should not be a rural-versus-urban issue. It would put my family farm out of business, but it hurts all Oregonians.”

The big turnout for the event surprised even its organizers. Lines of trucks paraded around the Capitol from 6 a.m. to 1 p.m.

Some convoys formed across the state as early as 1 a.m., said Jenny Dressler of the Oregon Farm Bureau.

Timber Unity was birthed out of the 2019 legislative session in protest of House Bill 2020, the name for last year’s cap-and-trade bill. The legislation was intended to slash carbon emissions but faced opposition from many Oregonians, who said high fuel costs would hurt their businesses.

The movement resembles the “yellow vests” in France, a grassroots citizens’ campaign that began in protest to fuel taxes and ballooned into a nationwide anti-government movement seeking economic justice for the working class.

Last year’s bill passed the House but failed in the Senate. The session ended in legislative chaos; Senate Republicans walked out to deny Democrats a quorum.

This year’s bill is similar to the 2019 legislation. By 2050, the Carbon Policy Office estimates the cap-and-trade plan would eliminate 43.4 million metric tons of carbon annually from the atmosphere.

Estimates provided by the nonpartisan Legislative Revenue Office estimated the program would raise prices by 22 cents per gallon in the first year of the program, according to state Sen. Bill Hansell.

Inside the building, protesters did not go unnoticed.

Brian Iverson, the husband of state Rep. Vikki Iverson, R-Powell Butte, said his wife described being inside the Capitol before protesters streamed in as the calm before the storm, with subdued tension, excitement and angst.

At 9 a.m., Gov. Kate Brown met with 10 Timber Unity leaders as part of her continued effort to speak with rural stakeholders.

The meeting was closed to the press, but former legislator Julie Parrish, now a Timber Unity member, said the meeting with Brown and her policy advisers was “genial.”

The governor, she said, listened to protesters’ concerns but made no commitments on bill alterations yet.

Parrish brought her own proposals to deal with climate change without hurting rural jobs.

“Taxing the behavior of pollution will not reduce pollution,” said Parrish. “We can do better. We need other solutions.”

In front of the Capitol, Jeff Leavy, one of Timber Unity’s founders, told the crowd that the movement has grown into something larger than just about fighting one bill. He said it’s now about challenging overregulation, getting citizens engaged with government and trying to have a voice in the legislative process.

“A legislator inside said you guys are shutting down the legislature and not letting people’s voices be heard,” said Sen. Denyc Boles, R-Salem. Surveying the crowd, she added, “I’d say this is the legislative process. We can hear the people’s voices.”

“Now you must build an army to defeat those in this building who want to take away your way of life. It’s a fight for freedom. It’s so much bigger than one bill,” he said, adding that “it’s now about all kinds of freedom: religious freedom, gun rights, the freedom not to be overtaxed.”

Timber Unity is a heterogeneous group: Some members believe climate change is a real issue and others don’t. What they agree on is that hurting rural Oregon businesses is not OK.

“The whole concept behind this bill is a big fraud,” said meteorologist Chuck Wiese. “If you really want this, I would say to the legislators, put it to a vote. But they know if they do, folks like you with common sense are gonna shut it down.”

“We’re not having a climate crisis,” added environmental scientist Bob Zybach. “We’re having a government crisis.”

Thank you for an informative and largely accurate report about the Timber Unity rally on the steps of the Oregon Capitol. And thank you for including my picture in the Capitol Press as one of the scientists who spoke to the large and boisterous crowd. But I am not the eminent forest ecologist Dr. Bob Zybach. I'm just astrophysicist Dr. Gordon Fulks.

I told the crowd that there is no climate crisis and even if there were, Oregon is simply too small to make any difference. Even my counterpart on the other side in the scientific debate, OSU Professor Phil Mote, has said as much. Oregon is one part in a thousand of the problem, if there is a problem. And there is no problem.

Again, thanks for a great article!