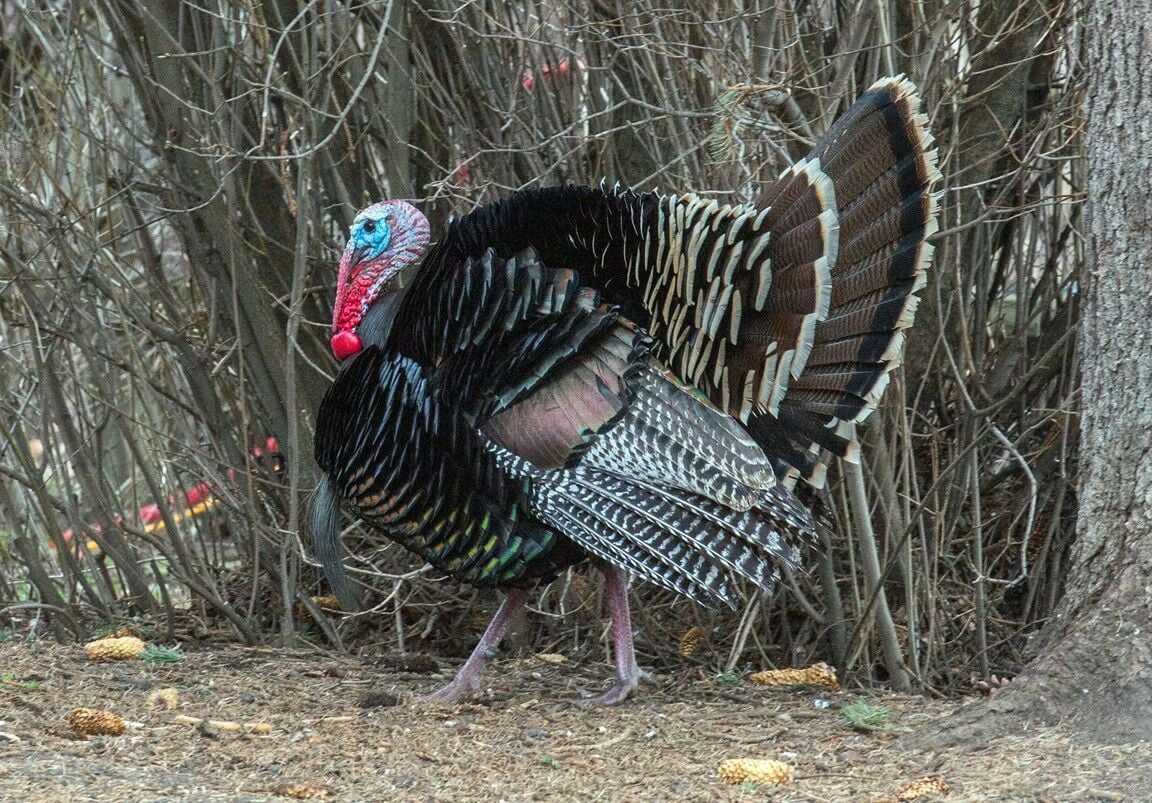 A tom turkey struts his stuff recently near the Umatilla River east of Pendleton. 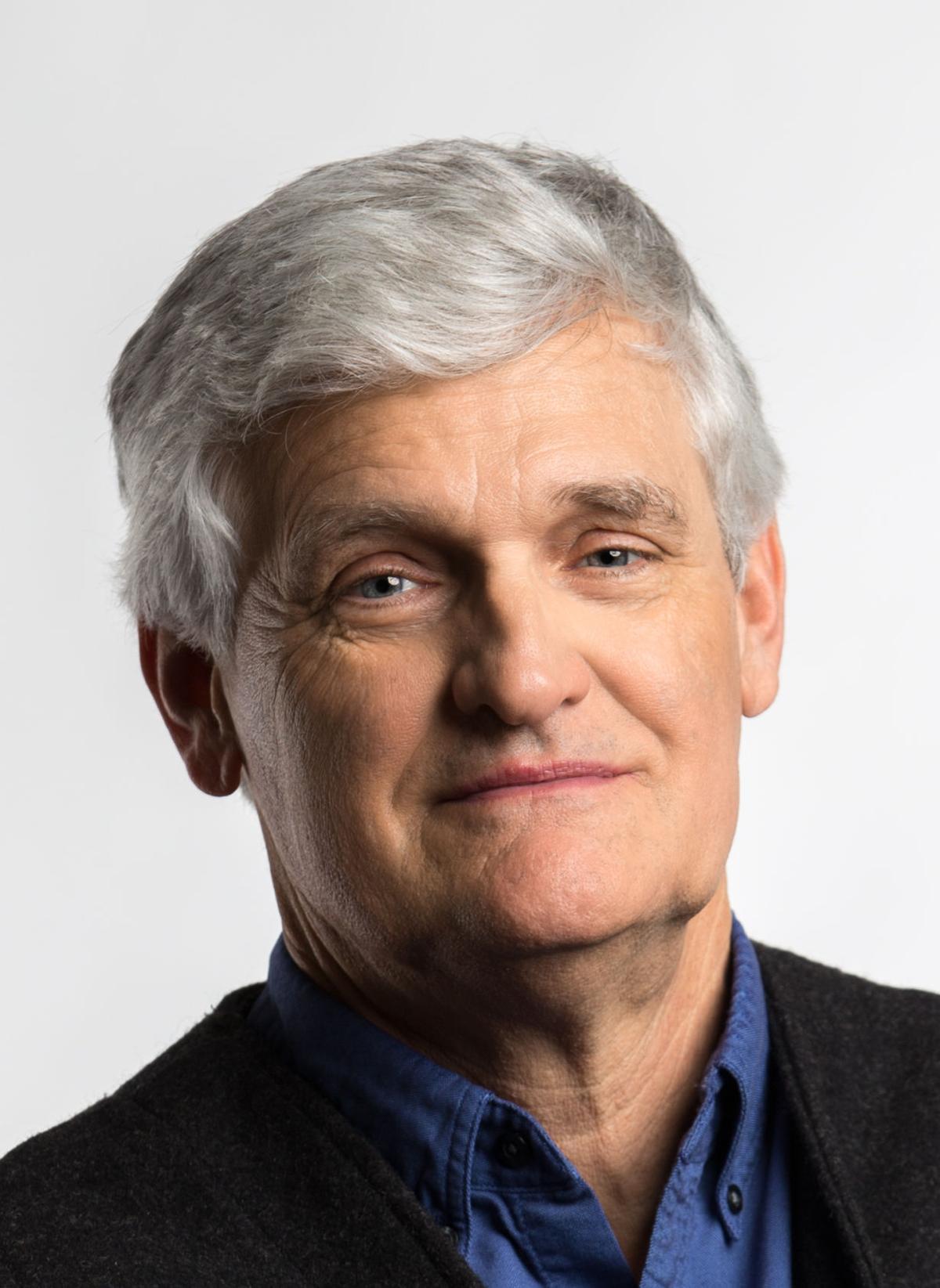 When it comes to wild turkeys, I admit to being a little bit conflicted.

April is gobbler season, when turkey hunters across the country break the bonds of winter by heading into the woods. An early morning gobble reverberating through the trees is a truly thrilling sound, and hunters work to lure in a tom turkey with an assortment of clucks, yelps and purrs imitating a lovelorn hen. The closeup sight of an adult tom in full strut, gobbling and drumming, with bare head shifting brilliant red, white and blue isn’t soon forgotten.

Elk hunters will find some aspects of turkey hunting familiar, with a recipe of equal parts calling, camouflage, subterfuge and adrenaline. One big difference is that turkey hunters also experience the fullness of spring; the sight of wildflowers, the sound of songbirds, the smell of moist earth, and the almost visceral sensation of ruffed grouse drumming.

The problem is, turkeys don’t belong here in the Blues.

Fossil records show that there was a distant relative of the North American wild turkey in Southern California more than 10,000 years ago, but the first written records indicate that the native range was mostly east of the Rocky Mountains and in Southern Arizona and Mexico. Turkeys are not native to any other continent, and European explorers, having found the birds to be excellent eating, brought turkeys back with them to be domesticated across Europe and Scandinavia by 1550.

Over the next several hundred years, North American turkey numbers were decimated as settlers arrived on the continent, and then moved west. In the mid-1900s, state wildlife agencies and sportsmen’s groups repopulated the continent with wild birds, including establishing huntable turkey populations in areas where they didn’t previously exist. In Oregon, the Game Commission started releasing birds in 1961, and over the next 40 years transplanted almost 10,000 birds in 584 different releases. I remember seeing my first turkey in 1978 near Tupper on the Umatilla National Forest, a direct result of one of these releases.

At one time the National Wild Turkey Federation had a goal to establish huntable populations in all 50 states by the year 2000. As a turkey hunter who thrills at the sound of a gobbler, I appreciate that goal. As an ecologist, it gives me chills.

So I am conflicted. Like ring-necked pheasants, California quail, Hungarian partridge and chukars, our region is host to non-native populations brought here solely for recreational purposes (a.k.a. hunting), and I have spent many days in the field in pursuit of each of these winged invaders. I also understand that the world is full of disastrous consequences of introductions of non-native species into new ecosystems.

Perhaps the most infamous example is the introduction of two dozen European rabbits into Australia in 1859 by an Englishman, nostalgic for the rabbit hunts he experienced back home. Presented with a climate of mild winters and no natural predators, the rabbits bred, well, like rabbits, and within 10 years were declared a nuisance with more than 2 million killed by hunters without any appreciable impact on the population. In 1950, the population was estimated at 6 million, and Australians built rabbit fences, removed hunting restrictions, and introduced a variety of diseases in desperate attempts to control the rabbits.

I could only imagine what could happen in places like Hawaii, with large number of unique species that have been devastated by non-native animals and plants. Yet, turkeys have been introduced there as well.

To be fair, there is limited evidence I could find of turkeys (or pheasants, quail, or partridges for that matter) having negative effects on native wildlife or habitats in North America. They can be an alternative prey source for medium-sized predators like coyotes and bobcats, and in theory their presence could support higher predator populations higher than they would be without turkeys, but no one has proven that yet.

Aldo Leopold, considered the father of American wildlife management, is famous for writing, “To keep every cog and wheel is the first precaution of intelligent tinkering.” I imagine he would have added that intelligent tinkering also means not adding extra wheels or screws into the works without fully understanding what might happen.

So I am conflicted. I have enjoyed seeing turkeys in South Dakota, Oregon, Washington, and even Hawaii. I also understand that they don’t belong in those places and dread what feels like the inevitable unintended consequences. In the meantime, I will do my feeble best to control the spread of this alien by attempting to fill one or more turkey tags this spring.

As an ecologist and law-abiding hunter, it’s at once both the least and the most that I can do.

Bill Aney is a forester and wildlife biologist living in Pendleton and loving the Blue Mountains.