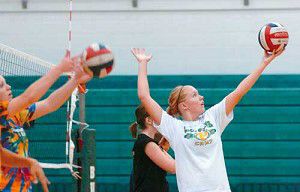 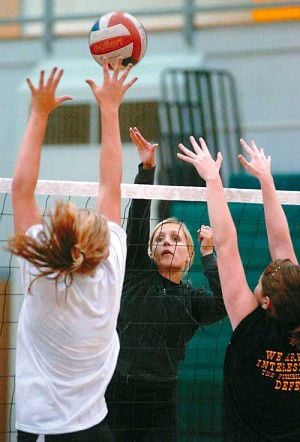 Pendleton volleyball coach Chelsie Freeman spikes the ball into a block by her players Thursday during practice at Pendleton High School.

Pendleton volleyball coach Chelsie Freeman spikes the ball into a block by her players Thursday during practice at Pendleton High School.

The Pendleton Buckaroo volleyball team has new intimidating uniforms and an attitude to match this season as they set their sights on Intermountain Conference and state supremacy.

"I think we've got a lot of talent and I think there's other talented teams but I think if they come in and work hard every day and commit to each other and trust each other then I think they're going to be very successful as a team," she said. "I know people want to win state and no one has really said it - I think they might be nervous to say it. But I think that's ultimately our goal."

The Bucks gave fans a first look at their sleek all-black long sleeve uniforms Saturday at the Red Lion Invitational in Pendleton and also displayed what should be one of the most deadly front line units in the state for the first time in 2008.

"Probably one of the most dangerous (in Pendleton history)," senior setter Mackenzie Gundlach said of the front line.

Outside hitter Bostwick returns to headline a unit that features plenty of height with junior Rylie Engelson and junior Kayla Stewart.

Stewart also returns as the team's ace server while Kelly Northern, Shelby Getz and Katrin Baar (an exchange student from Germany) could all see time at libero.

Though many of the faces are the same as last season, the style of volleyball will look new to fans as Freeman wasted no time in putting her stamp on the program with a new playbook.

"They've had to learn an entire new system from me," Freeman said. "I run ... wing blocking and they hadn't done that before. They're doing a perimeter defense that's called the J defense where you pull back and move forward and serve-receive is a little bit different from what they're used to. But they've adapted really quick to that which is amazing because when I coached at Mount Hood we did a similar thing and those struggled a little bit with it."

"It's still new because we've been doing the same thing for a long time," Bostwick said, "but it's going well."

Bostwick added the workout regimen introduced by Freeman in the offseason is already starting to pay dividends as every player seems faster and quicker than last season.

With so much change going on around the program, one thing that has remained is the unity the team was able to forge last season, a year then coach Baty called "100 percent hassle free".

"It's continued over form last year, we've just substituted new people," Bostwick said. "They fit in real well and it's worked so far so hopefully it continues."

The Bucks begin match play Thursday, Sept. 4 at La Grande and jump right into IMC play the next week with a Sept. 9 date at Madras. Their first crack at Crook County is an Oct. 3 away game.

Photos: Our favorite staff images from the 2020 Nebraska football season