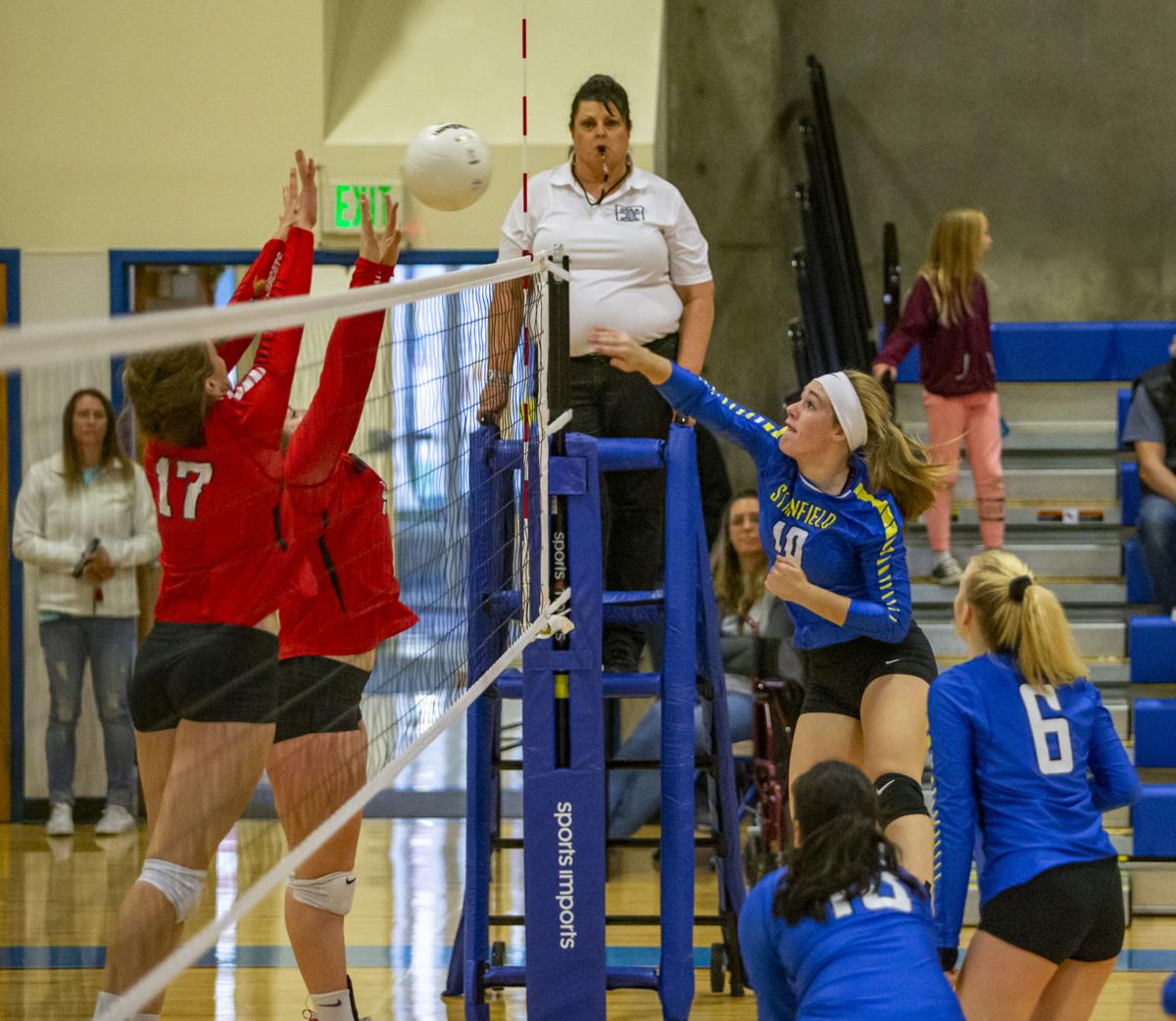 Stanfield’s Savannah Sharp (10) drives the ball over the net toward a pair of Union blockers in their Oct. 10 match. The Bobcats defeated the Tigers in three sets in Stanfield. 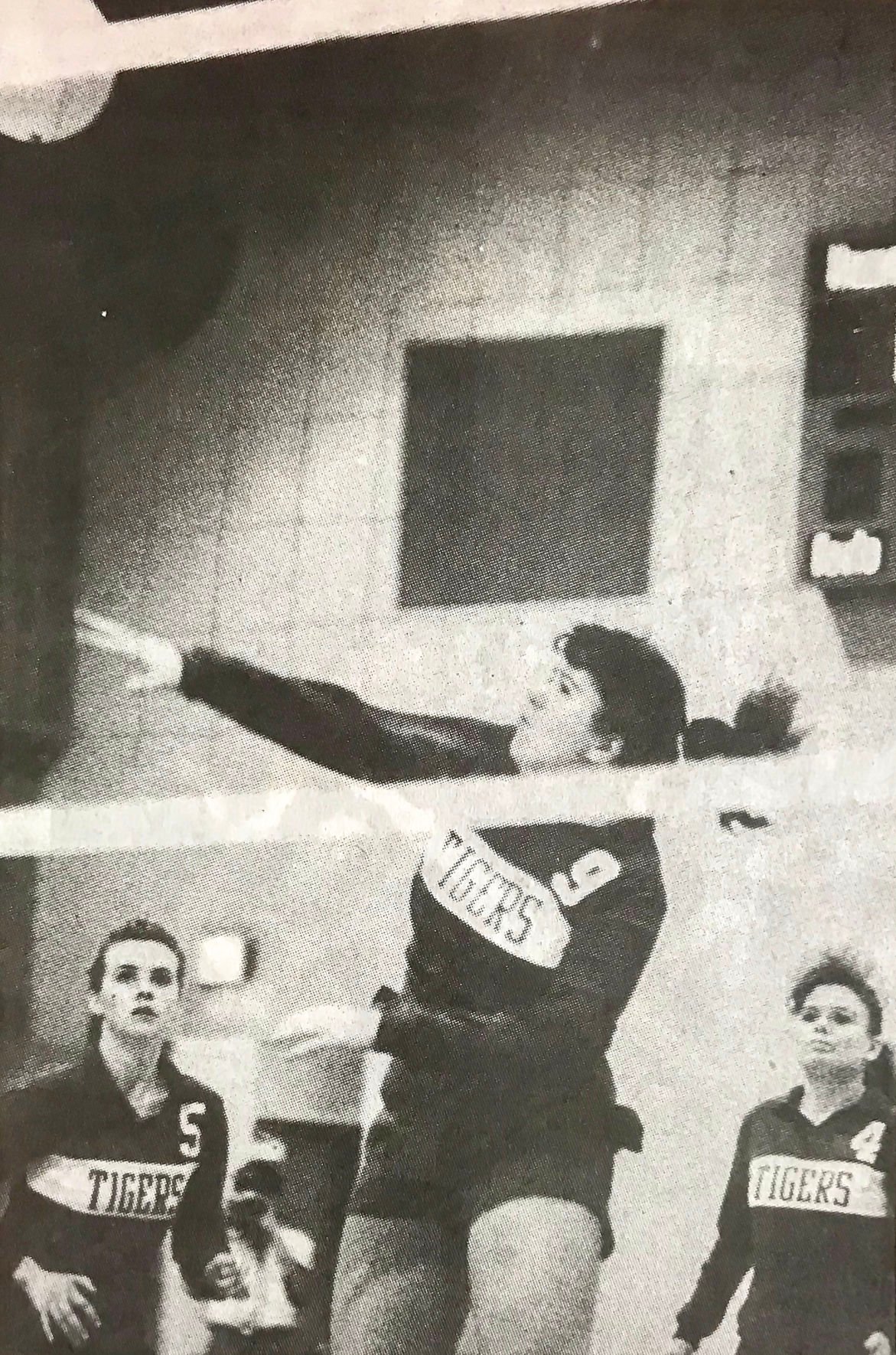 Teresa Griffin, 9, of the Stanfield Tigers spikes a return against Imbler during the state playoff match in Stanfield on Friday, Nov. 9, 1990. Her teammates Micki Svetich, 5, and Teena Griffin, 4, watch the action. Stanfield was eliminated from the playoffs.

Stanfield’s Savannah Sharp (10) drives the ball over the net toward a pair of Union blockers in their Oct. 10 match. The Bobcats defeated the Tigers in three sets in Stanfield.

Teresa Griffin, 9, of the Stanfield Tigers spikes a return against Imbler during the state playoff match in Stanfield on Friday, Nov. 9, 1990. Her teammates Micki Svetich, 5, and Teena Griffin, 4, watch the action. Stanfield was eliminated from the playoffs.

STANFIELD — There is a banner that hangs in the Stanfield High School gym that reads: “It’s about the experience.”

The Stanfield volleyball team is in the midst of the best season the Tigers have had in 29 years, and they are soaking it all in.

“We are having fun,” senior Savannah Sharp said. “It’s nice to see the community come and support us, as well as the support from the other teams in the league.”

The Tigers (19-8) will travel to play Vernonia (20-7) in the first round of the Class 2A state tournament at 3 p.m. Saturday at Vernonia High School.

It’s the first time the Tigers have earned a state berth since 1990, and just the fourth time in school history. They have never won a match at the state level.

“It’s crazy,” Sharp said. “But you can see the lack of performance in girls sports (she points to the near-empty banners on the gym wall). Kendra (Hart) and I were talking about things from our freshman and sophomore years. We don’t remember much, but we have seen the growth of the team.”

Stanfield coach Blaine Ganvoa said the Loggers are similar to the Tigers size-wise, and that they match up well athletically. But there is one big difference.

“They key everything around one player (outside hitter Jordan Walters),” Ganvoa said. “We have more options offensively at the net in every rotation, especially with Kendra being left-handed. Having that, with our outsides, is a threat. Their serving is consistent, and we are going to have to minimize our serving errors.”

The Tigers have a mix of talent, from freshman sensation Zuri Reeser, to sisters Brielle and Brooke Howland, who transferred from Pilot Rock, to Sharp and Hart, who have weathered the bad with the good the past four years.

“What we stress, is everyone’s role has value to our success,” Ganvoa said. “Whether they are on the court or on the bench, they are vital to our success. On practice days, they make us compete. We couldn’t do it without them.”

Ganvoa believes the Tigers have it in them to be successful this weekend.

“If not, we wouldn’t be here,” he said. “We will make the most of our opportunity. We have never been in this position, and everything is new. Preparing for the playoffs is something we aren’t used to.”

Brielle Howland is in her first year with the Tigers, but she knew a good portion of the team before school started, having played club ball with Reeser and her sister Brooke.

“I was friends with a couple of the girls, but I was nervous at the same time,” Howland said. “We have something good here.”

Back in the day

The Tigers first made an appearance at the state volleyball tournament in 1978. They lost in the first round of the Class A tournament to eventual state champion Prairie City 15-2, 15-5.

“It’s so much more than a game,” said Michelle (Marcum) Pryor, who was a 6-foot-3 middle on the 1988 and 1990 teams. “I don’t remember a lot about the games, but I do remember the whole town used to show up for our games. It was a great support system.”

Pryor said she keeps her eye on her former team, and is excited about the success the Tigers have had this season.

“This is so exciting,” said Pryor, who lives in Pendleton. “It’s so great — it’s about time. I think of years gone by. Small school are so different. It’s about community. These girls have something in them that they will succeed. Whether they win or lose, like us, they will succeed.”

Brandy (Tyler) Findley also played on the 1988 and 1990 teams. She was a setter for Pryor and outside hitter Micki (Svetich) Schlapia, who she called “one of the best players on the team.”

“I don’t remember much,” said Findley, who lives in Hermiston. “I do remember the girls. We had a very sporty senior class, and we were all friends.”

Findley said she doesn’t keep up with the Tigers much these days. Her daughter, Abby, pitches for the Hermiston girls slow pitch softball team that is headed to state this weekend.

“The last time I watched volleyball, Abby was in the eighth grade,” she said. “She’s a junior now.”

The current Stanfield players enjoyed hearing about the former teams, but were perplexed by the best-of-three matches and no rally scoring.

“That would be crazy,” said senior Ashley McNeil. “Rally scoring makes it fun. You are sitting on the edge of your seat for something to happen. Every play matters.”

Pryor, who went on to play at Blue Mountain Community College, said she hopes the Tigers will embrace their season and what they have accomplished.

“I have scrapbooks of newspaper articles that my mom and I put together,” she said. “Every once in a while, I get them out and look at them. I hope there is a day when they are reminiscing 20-some years later about their trip to state.”