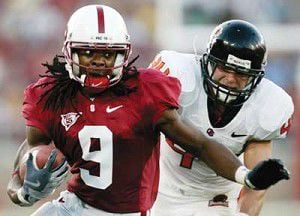 Stanford's Richard Sherman runs with the ball in the first half during their NCAA football game against Oregon State.<br><I>AP?Photos 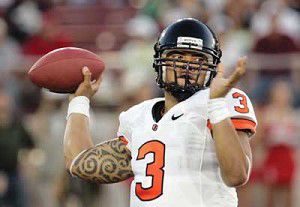 Stanford's Richard Sherman runs with the ball in the first half during their NCAA football game against Oregon State.<br><I>AP?Photos

STANFORD, Calif. - As Darrell Catchings reached the ball toward the goal line, it appeared Oregon State was on its way to a memorable comeback. Then Taylor Skaufel knocked it loose for a touchback and Stanford survived a thrilling season-opening victory.

Catchings' fumble in the final seconds was one of two bizarre plays in the south end zone that made sure Stanford would not waste Toby Gerhart's stellar return from a knee injury and hold on for a 36-28 Pac-10 victory Thursday night.

Stanford did two things much better than Oregon State-run the ball and protect it. Gerhart had a career-high 147 yards and two touchdowns, while the Beavers had two key interceptions and two fumbles in the second half.

The first fumble gave the Cardinal the lead for good on a safety late in the third quarter. The second came with just 47 seconds remaining, when the Beavers looked on the verge of erasing a 16-point deficit before Skaufel poked the ball out of Catchings' hands and out of the end zone for a touchback.

"I was trying to make a play for the team but unfortunately it didn't work out that way," Catchings said. "It didn't happen. I have to learn from this and try to make better decisions."

With Gerhart playing only one game last year, the Cardinal struggled to run the ball. That was especially true in a 23-6 loss at Oregon State when they were held to minus 8 yards on the ground.

But a healthy backfield made all the difference. Gerhart showed the same form he had in his one game last year when he ran for 140 yards against San Jose State.

Ep. 175: A busy offseason week for the Huskers and a COVID-19 pause in hoops