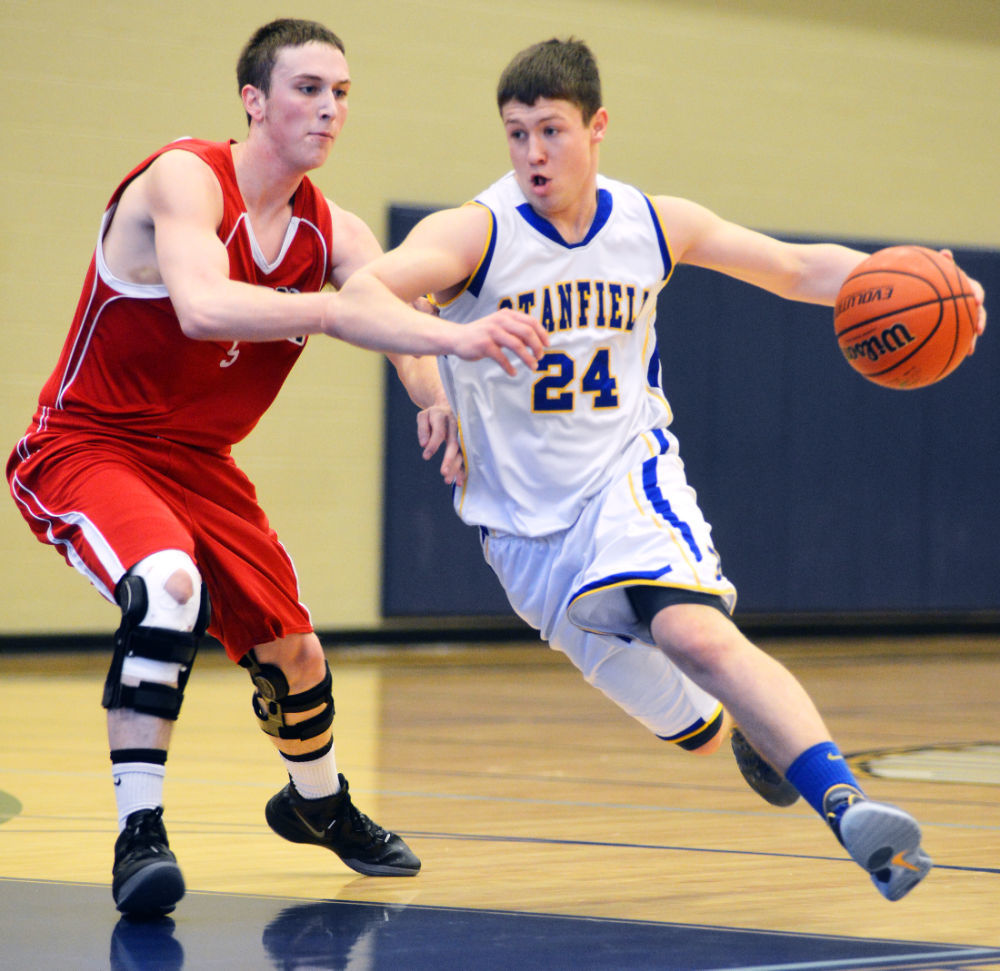 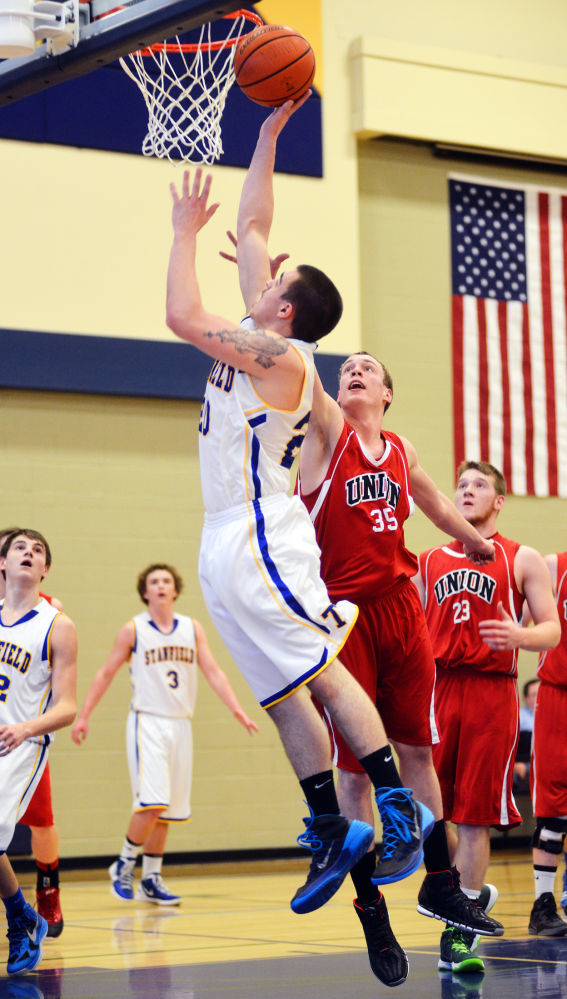 <p>Staff photo by E.J. Harris StanfieldÕs Joseph Valadez shoots the ball guarded by UnionÕs J.D. Graves on Friday during the TigersÕ 49-39 win against the Bobcats in Hermiston.</p> 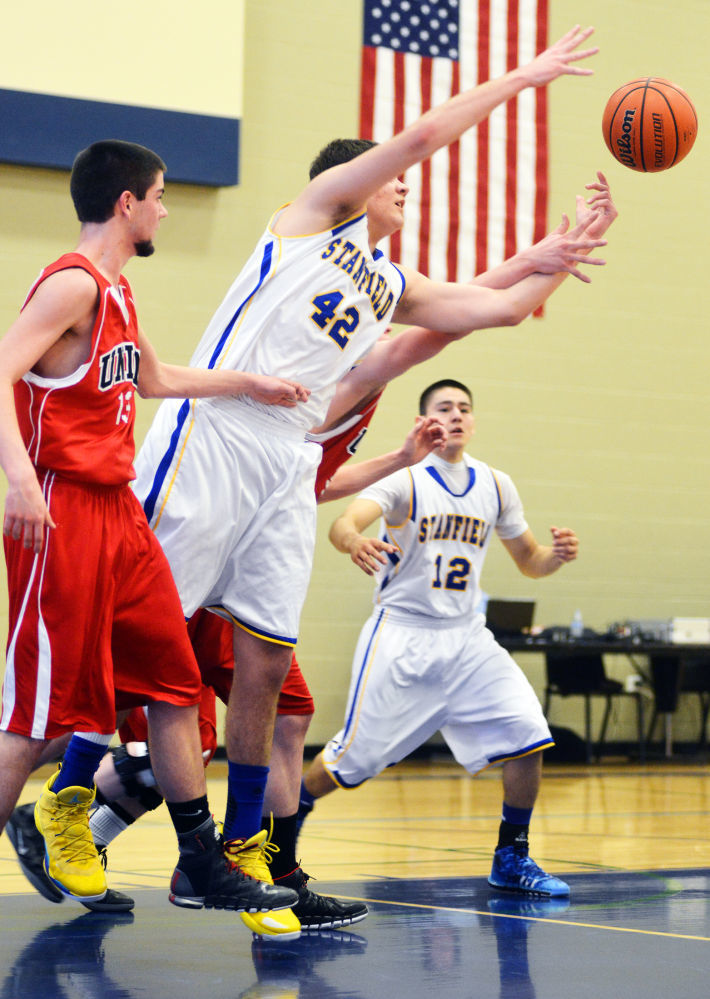 <p>Staff photo by E.J. Harris StanfieldÕs Milan Davchevski goes for a rebound guarded by UnionÕs Kenn Sipp as Felipe Rodriguez (12) looks on Friday during the TigersÕ 49-39 win against the Bobcats in Hermiston.</p>

<p>Staff photo by E.J. Harris StanfieldÕs Joseph Valadez shoots the ball guarded by UnionÕs J.D. Graves on Friday during the TigersÕ 49-39 win against the Bobcats in Hermiston.</p>

<p>Staff photo by E.J. Harris StanfieldÕs Milan Davchevski goes for a rebound guarded by UnionÕs Kenn Sipp as Felipe Rodriguez (12) looks on Friday during the TigersÕ 49-39 win against the Bobcats in Hermiston.</p>

HERMISTON  For all of a half, Weston-McEwen was offensively inept.

Some of it was porous shooting. A lot of it had to do with Heppner.

But senior guard Lance Thacker and the TigerScots switched gears in the second half of the Blue Mountain Conference district semifinal Friday night, downing the Mustangs 49-49 at Armand Larive Middle School.

Thacker scored 16 of his game-high 19 points after halftime to pace the fourth-seeded TigerScots otherwise stagnant offense and help his team advance to the third-place game of tournament.

He wasnt too concerned about the TigerScots double-digit deficit after fifth-seeded Heppner (14-10) jumped out a 21-11 lead.

Right now, were just playing for games, said Thacker, referencing his teams win-or-else scenario. I knew we were going to make a comeback.

Weston-McEwen (17-8) will take on third-seeded Union Saturday at 10:45 a.m. for the third and final berth into the 16-team portion of the state 2A basketball tournament next week.

Thacker did most of his damage down the stretch, hitting back-to-back field goals after the Mustangs knotted things up at 39-39 with just five minutes to go.

Senior guard Tyler Simmons then connected on a 3-pointer to give the Weston-McEwen a cushion in the final two minutes. Thacker hit a pair of free throws and came up with a timely steal.

Heppner set itself up for a last-second heave at the buzzer to tie, but it was well off the mark.

We knew (Weston-McEwen) was going to pick it up, Heppner coach Jeremy Rosenbalm said. Theyre a good team. It obviously sucks to end (the reason) this way, but I couldnt have anything more from my team.

Sophomore-laden Heppner, which fell to the TigerScots twice during the regular season, saw J.C. Putman (11 points, 6 rebounds) do most of his damage in the first half.

His free throws gave the Mustangs a 21-11 lead, but after Weston-McEwens Jarett Bousquet scored inside to give his team 33-29 advantage in the third, it capped off the TigerScots 22-8 run.

We started picking it up on the defensive end, Thacker said. And a lot of our offense comes from our defense.

Heppner took a short-lived lead in the second half when freshman Logan Grieb (13 points) hit a three-pointer to start the fourth quarter. It was the Mustangs final lead of the night.

Simmons and Linton McAllister scored 11 points each for Weston-McEwen. C.J. Kindle had a team-high 14 points for Heppner.

STANFIELD?49, UNION 39  At Hermiston, persistence was key for the Stanfield boys basketball team Friday during its Blue Mountain Conference district tournament semifinal game against the Union.

The Tigers overcame a slow first half to beat the Bobcats at Armand Larive Middle School.

The Tigers stopped a 7-1 Union run in the second quarter to battle within 22-19 at halftime, then went on a 16-3 run that spanned the third quarter to put them up 35-25 headed to the final frame.

Bryce Linker scored 16 points to lead Stanfield, and said he wanted to drive to the basket early and often to break a shooting slump.

The goal for me was to get to the rim, he said. I felt like if I could get into the lane, Id get a lot of easy looks near the basket for myself or Id be able to find an open teammate due to a collapsed defender.

Milan Davchevski was able to hold Unions JD Graves relatively in check with a team-high 16 points. Davchevski scored 10 himself, and drew high praise from Stanfield coach Daniel Sharp after the game.

Hes had a great week of practice, Sharp said. His length really helps us on the defensive end. Were not very big around the basket, and he is kind of like our anchor.

For their efforts, the Tigers earned a date with the No. 1-ranked Irrigon Knights in Saturdays 2:45 p.m. championship at Hermiston High.

Linker said the key to defeating the Knights for the first time this season will be defense.

Irrigon is an extremely talented offensive team, he said. If we can get our defense going and gain some confidence in our ability to make stops, it should be a pretty good matchup.