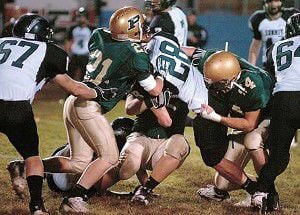 Pendleton's Josh Ernst, 21, Sheehan Barnhart, and Dan Fisher, 44, put a stop on Summit's Cody Knighten in the Buck's 22-12 win over the Storm Friday in Pendleton.<br> Staff photo by E.J. Harris 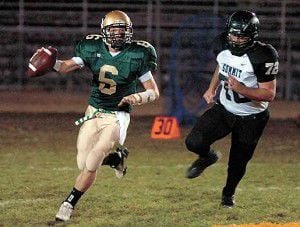 Pendleton quarterback Jake Talbot outruns Summits Ethan Hawes while looking to pass in the Buck's 22-12 win over the Storm Friday in Pendleton.

Pendleton's Josh Ernst, 21, Sheehan Barnhart, and Dan Fisher, 44, put a stop on Summit's Cody Knighten in the Buck's 22-12 win over the Storm Friday in Pendleton.<br> Staff photo by E.J. Harris

Pendleton quarterback Jake Talbot outruns Summits Ethan Hawes while looking to pass in the Buck's 22-12 win over the Storm Friday in Pendleton.

PENDLETON - Jared Standley and the rest of the senior Pendleton Buckaroos could not have picked a better time to take over a game.

Down 12-7 to Summit at the half, with a real possibility of going winless at home in the 2008 season, Standley and the Pendleton offensive line put the team on their backs scoring 15 unanswered points to drive home the most important win of the season, 22-12.

The Bucks (4-3, 3-2 IMC)dominated the time of possession in the second half and finally took the lead on the last play of the third quarter - a five-yard touchdown run by Standley.

After forcing the Storm (4-4, 3-1 IMC) to punt on their ensuing drive, Pendleton started from its own 10-yard line and quarterback Jake Talbot handed the ball off to Standley 17 times as the senior bounced off multiple would be tacklers, picking up 80 of the toughest yards any Buckaroo has earned on the season.

"He said he could do it," Offensive Coordinator Steve Utter said. "So we said we were going to put the game in the hands of our line and our running backs and they decided they were going to win that game. It was very rewarding to see those guys grow up and finish a game the way we knew they could."

Following the blocks of fellow seniors Justin Lauer, Sheehan Barnhart and fullback Wyatt Taylor, Standley (27 carries for 123 yards and three touchdowns) not only drove the length of the field, but in the process of going up by 10 took seven full minutes off the clock in the fourth quarter.

"They said I only ran 17 plays that drive, but it felt like 100," Standley said. "But you know what, I wanted this game so bad. My offensive line had an awesome game and we got it done ... That drive they weren't stopping us. They weren't going to take it away from us. I can't emphasize how well our line did tonight."

It almost was the drive that wasn't, though, with a close call on the Summit punt and a break that finally went the way of the Bucks.

The Storm's T.J. Altschuler boomed his punt from the Pendleton 47 yard-line backing Pendleton return man Devon Polhamus inside his own five.

Thinking he could still make a play on the ball, Polhamus ran up under it, but at the last possible second let it hit the turf and roll into the end zone.

"Everything was going through my head at the same time," said the junior, who finished the game with 79 all-purpose yards. "When it came time for the ball I stretched out and moved my arms at the last second because I knew the spin would take it back (into the end zone)."

As the ball trickled into the end zone, no whistle could be heard, so Polhamus picked it up and was immediately drilled in the end zone.

The initial call came back a safety, which would have given Summit the ball down only one with nine minutes remaining.

But after a short conference, the call was reversed, instead called a touchback.

"The crew did a great job of getting together, talking about it and making the right call," Utter said. "They did a good job as a referee crew tonight as well."

Down 10 with less than two minutes remaining, Summit was forced to go exclusively to the air, but where quarterback Harlan Porterfield was successful passing in the first half with 180 yards and a pair of touchdowns, he was almost equally ineffective in the second half, due to halftime adjustments by the Bucks.

The pass rush was sparse, but the Bucks still harried Porterfield for three sacks - two by Dan Fisher - and three interceptions by Dannon Baker, Logan Whitten and Josh Ernst.

"We treated this just like a playoff game tonight," Talbot said. "That was our philosophy going into it and this was our seniors' last night at home and they kept pushing us. They didn't want to lose."

Watch now: Reimer says Huskers have 'a lot left in the tank'