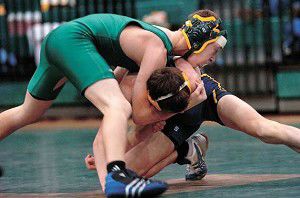 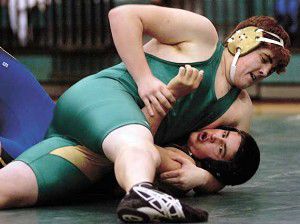 PENDLETON - The Pendleton wrestling team was looking to get their season headed back in the right direction after dropping their previous two Intermounatin Conference duals, and Saturday's home dual against Bend was a perfect opportunity.

The Bucks had to do it by shifting around their lineup to fill a big hole at 145 pounds and got encouraging performances from some of their younger wrestlers in a 33-23 win.

"We definitely needed a team win today," said senior Sheehan Barnhart, who recorded one of the Bucks' two pins at 285 pounds. "This definitely picks our spirits back up. Overall I felt pretty good. We all won where we were supposed to. I'm just looking forward to getting to Districts and wrestling there."

The Bucks started the dual out at the 145-pound weight class, where freshman Cain Smith was wrestling up to fill the slot left vacant by senior Mike Savage, who is missing in action.

Smith answered the call and recorded his second win of the season over Bend's Chris Wilcoxson with a second-round pinfall (3:46).

Pendleton coach Fred Phillips had no answers for where Savage may be.

"Again we had a kid that we don't know where he is and so Cain had to bump to (145) and he did a good job (Saturday) getting that win," Phillips said. "That's not exactly our opportune lineup when you're missing one of your returning state placers, who I have no idea where he is. None of us have spoke to him or heard from him since Tuesday."

With Smith moving up, it meant other Bucks would have to bite the bullet and step up a weight class too.

"You've got to give our young kids credit, the sophomores and freshman, moving up a weight class as (Jacob) Watkins and (Cameron) Rinehart did and wrestling tough and being there for their teammates," Phillips said.

Watkins and Rinehart weren't able to record wins, but didn't give up pins in a close match. Rinehart, at 135, wrestled ranked Bend senior Colby Corona to a 2-0 decision.

The Bucks also got a boost from the return of senior Jared Standley from injury, who got a win at 189 to start a streak of five Pendleton wins to open a 27-13 win.

Standley made a couple of mistakes that kept the match tied at five going into the third round but an escape, takedown and near fall put him ahead 11-5 with a minute to go. He went on to win 12-10.

Senior Miles Moore followed that up with a win over Bend's Liam Brown. Moore was wrestling with 10 stitches in his forehead after butting heads with freshman 112-pounder Trevor Hancock at practice Friday.

Moore, who wore a protective mask covering most of his face, was aggressive early in the match and gave up a penalty point for it.

"I was just going to go out there and feel him out like I usually do but he kept on grabbing my mask and I couldn't see much so that pissed me off a little bit," he said. "I couldn't hear or see much at all."

Moore came back to take a 2-1 lead after two rounds and jumped out to a 6-1 lead early in the third with a reversal and near fall. He won 10-6.

Then Barnhart followed his big win over Madras' Woody Williams on Thursday by pinning Nick Russell in 1:29. It was his second win over Russell this season.

"Last time I wrestled him he didn't come out as fast as he did (Saturday) so the head and arm was there so I took it," said Barnhart, who dumped Russell to the mat and then used his size advantage to get the quick pin.

After a win by forfeit at 103 and a Trevor Hancock win at 112, No. 2 ranked Bend 119-pounder Jacob Graber got the Lava Bears some points with a major decision over Dustin Raines that Phillips said was a good match for his junior.

"I thought Dustin Raines did a really good job wrestling one of the better kids in the state at 119 pounds. He was in the match for quite awhile," he said.

But Bend didn't get a chance to close within striking distance as Colt Glenn and Travis Suttle recorded identical 10-4 victories in the next to matches to lock up the win at 33-17.

"Once again Colt Glenn steps up and gets a win for us in a tough situation when the dual is still on the line at that point," Phillips said. "You've got a freshman out there wrestling at one of the toughest weights around and he gets a win for us and then Suttle goes out there and puts it away."