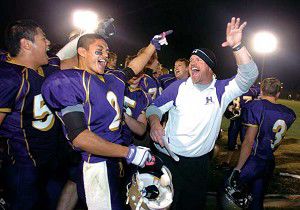 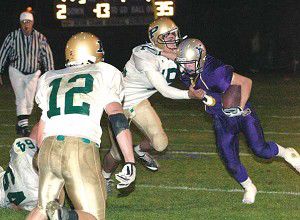 HERMISTON - The first half of their game against Pendleton must have felt like so many first halves in the rivalry's past for the Hermiston Bulldogs.

Three fumbles and a one-point lead appeared to be staring the Bulldogs in the face at the half, but with the ball in Faafiaula Ena's hands, the game all changed.

The junior led a 12-play drive and punched in a six-yard run to give Hermiston an eight-point lead at intermission. The Bulldogs (6-3, 5-1 IMC) went on to score a total of 27 unanswered, beating Pendleton (5-4, 3-3 IMC) 41-24, marking Hermiston's first win in the series since 2004 and just the fifth against the Bucks in school history.

The win also gave the Bulldogs an Intermountain Conference title, sharing the honors with Mountain View.

According to Hermiston coach Mark Hodges, the drive just before the half gave his players the confidence they needed to allow them to know they could beat the Bucks.

The Bulldogs went from inexplicable turnovers and devastating penalties to playing sharp, disciplined football for the entirety of the second half.

"We knew we were doing bad," said Ena of the first-half miscues. "Knowing you're doing bad is not going to make you play as well as you can. Going into the locker room we knew we needed to come out and get after it again."

Ena and his offensive line were the driving force toward that end, as the group of linemen allowed just one sack and blew open running lanes to the tune of 310 yards on the ground.

"When we needed plays our offensive line got off the ball and out-physicalled them," Hodges said. "By in large we were the most physical team and that's what wins big games, physical play."

Ena tallied 85 of those - adding 137 yards and two scores through the air - with his dive across the goal line at the pylon giving Hermiston the emotional boost into the break.

"It's always good to score, it drives the fire," said Tyler Green, who crossed the goal line on two separate occasions and rushed for a game-high 206 yards. "It gave us the bigger lead and a momentum switch because we got the ball after halftime. At halftime we made some adjustments ... we decided to settle down and play as a team."

After sitting out the first quarter for disciplinary reasons, Green sparked the Hermiston offense with a 65-yard touchdown run in the second, but saved the bulk of his damage for the second half, churning out 136 yards on 12 carries.

Behind Green and Ena, the Bulldogs were unstoppable in the third quarter, scoring three touchdowns on three drives for a 40-13 lead.

"They ran a really good offense," Pendleton linebacker Jared Standley said. "Their line did a good job giving Ena a lot of time to throw the ball and (Green) did a good job of running the ball ... It hurt to have them score right before halftime when we were right there with them. It was fourth down and everything was going for us."

Standley was the major force for the Bucks' offense in the game, as well as defense. The senior tailback rumbled and battered his way for 114 yards rushing, finding paydirt on three separate occasions.

"The score dictated not getting Standley the ball more," Pendleton Offensive Coordinator Steve Utter said. "We wanted to stick Jared in there and pound away and we thought we could be successful."

Penalties and turnovers were the back-breaker for the Bucks, often stalling drives or giving Hermiston extra chances. As Hermiston's momentum mounted in the second half, the Bucks tried to make a comeback, but found themselves down too far to make a dent in the deficit.

After scoring early in the fourth quarter, Pendleton kicker Dan Fisher recovered his own onside kick and the Bucks drove to the 10-yard line, but on fourth-and-eight, quarterback Jake Talbot's pass was batted down in the end zone.

"It was really important (to stop them) that time," Ena said. "They had hope still. Getting that stop shut down the game. That was a big stop for us defensively."

Hodges said his defense was key in the second half, as he continued to get a feel for the Bucks offensively. While his offense was scoring touchdowns on three unhindered drives, the defense was holding fast, forcing back-to-back punts in the third quarter.

The loss did not end Pendleton's season, though.

With a Summit loss to Bend Friday, the Bucks will play next week in a first-round game at Churchill - the same Lancer team that knocked them out of the playoffs a year ago.

"This is over, we're not going to keep it inside of us," said Talbot of the loss to the Bulldogs. "We're going to get back after it next week and try to win a playoff game, which we haven't done in over three years. We're going to look to get that turned around in the playoffs, that'll be our main focus."

The Bulldogs will get an extra week to prepare for the Corvallis Spartans, who earned their first-round bye via a 16-11 edging of South Albany.

Photos: Recruits get a taste of Husker football at Friday Night Lights