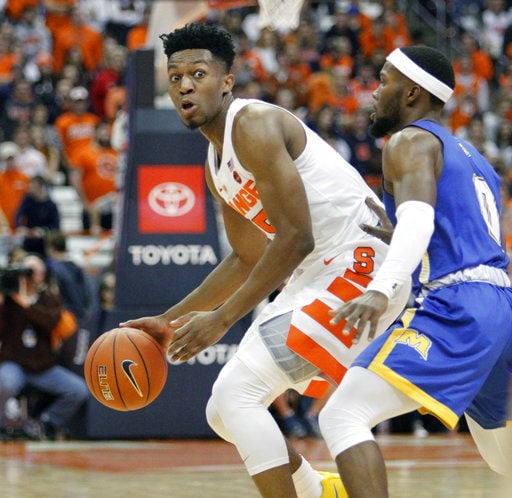 Syracuse's Tyus Battle, left, looks to pass the ball while being guarded by Morehead State's A.J. Hicks, right, during the first half of an NCAA college basketball game in Syracuse, N.Y., Saturday, Nov. 10, 2018. (AP Photo/Nick Lisi) 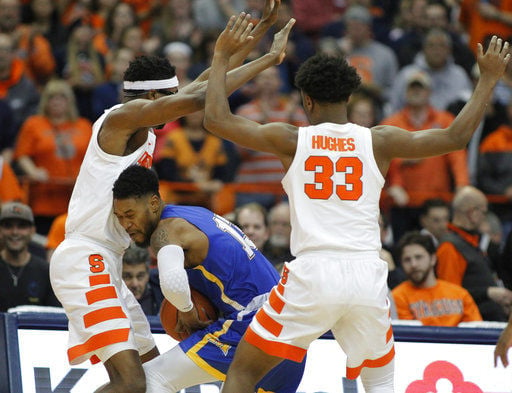 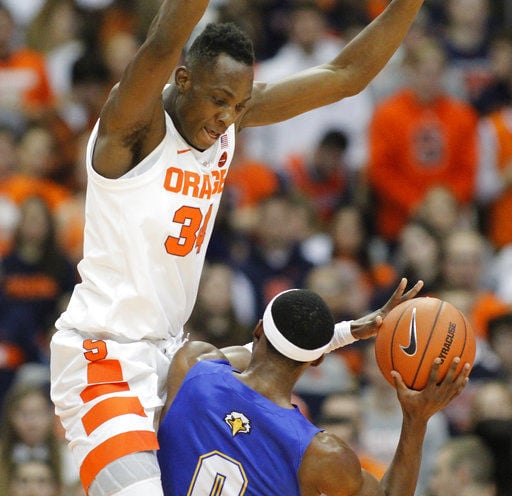 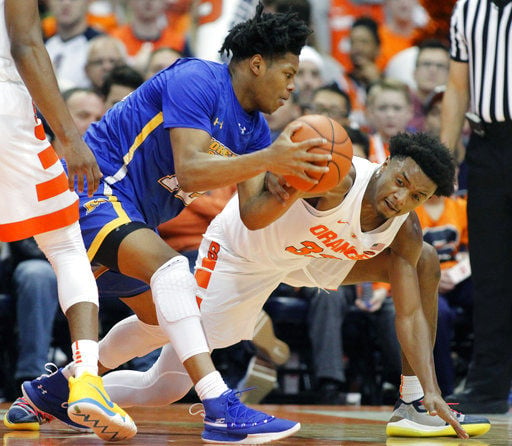 Syracuse's Tyus Battle, left, looks to pass the ball while being guarded by Morehead State's A.J. Hicks, right, during the first half of an NCAA college basketball game in Syracuse, N.Y., Saturday, Nov. 10, 2018. (AP Photo/Nick Lisi)

SYRACUSE, N.Y. (AP)  Syracuse appeared to be on its way to an easy night before Morehead State rallied.

There was a lot to like for the Orange. And a little trouble, too.

Syracuse led 25-11 midway through the first half. But Morehead State responded with a 16-3 run, keyed by three steals. The Orange led 36-30 at the break.

"I told the kids if we go down we're going to go down swinging, the way we want to play," Morehead State coach Preston Spradlin said. "We want to press. We want to apply pressure, do things like that, and I think we did a good job with that tonight. Our defense allowed us to get back into the game."

The Eagles had seven steals, including six in the first half.

Oshae Brissett added 17 points and 13 rebounds for Syracuse (2-0), which opened the season with a 66-34 victory over Eastern Washington on Tuesday night. Paschal Chukwu finished with 14 points, 10 rebounds and six blocked shots.

"They were being more aggressive than us (in the first half)," Brissett said. "When teams go on runs we have to find it within ourselves to stop them."

Next up for the Orange is a matchup with former Big East rival Connecticut on Thursday night.

Jordan Walker led Morehead State (1-2) with 24 points, including 19 in the second half. Lamontray Harris had 14, and Malek Green finished with 12.

"This game tells us that we can play with anybody," Walker said.

Syracuse outrebounded the outmanned Eagles 51-37 and had 44 points in the paint.

A dunk by Harris got the Eagles within three with about 16 minutes to go, but the Orange responded with a 12-0 run, keyed by Hughes' seven points. Morehead State closed to 66-58 on a layup by A.J. Hicks with under seven minutes remaining, but Syracuse slowly pulled away in the final minutes.

Battle scored 18 in the second half after he had eight points in the season opener.

Syracuse played its second straight game without starting point guard Frank Howard, who is coming back from an ankle injury.

"As a team we're just not where we'd like to be," Boeheim said. "We're doing the best we can with the situation we're in. It's like a football team playing without a quarterback. It's not easy. Hopefully, we'll learn and get better as we move on."

The Orange went 3 for 16 from 3-point range. Hoping to improve after last year's trouble from beyond the arc, Syracuse is 6 for 33 from deep so far.

Morehead State: The Eagles hung tough with the much-taller Orange, the second consecutive game Morehead State held its own against top competition. The Eagles lost 80-70 at UConn on Thursday night.

Syracuse: Howard has started practicing with the team and could return next week against the Huskies.