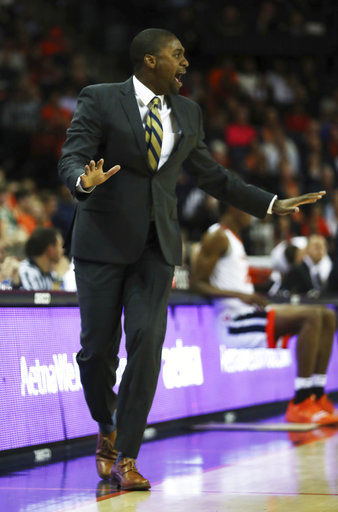 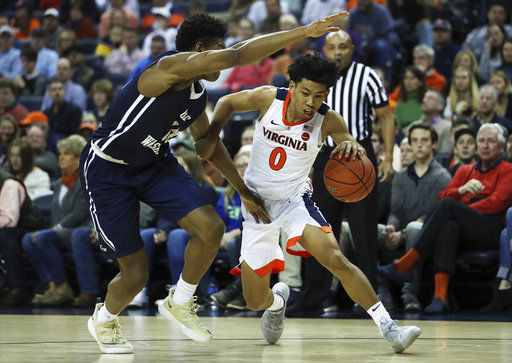 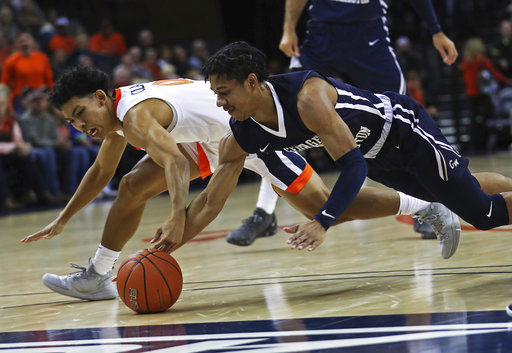 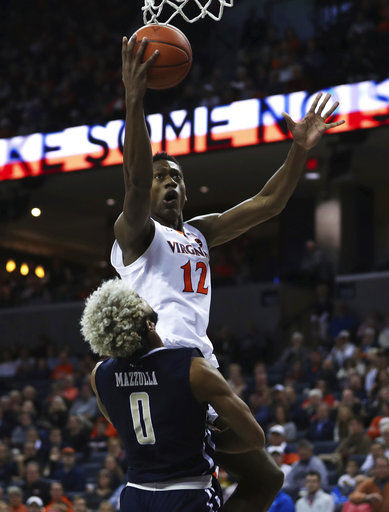 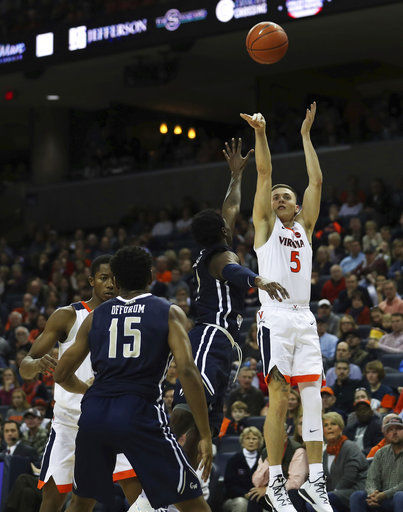 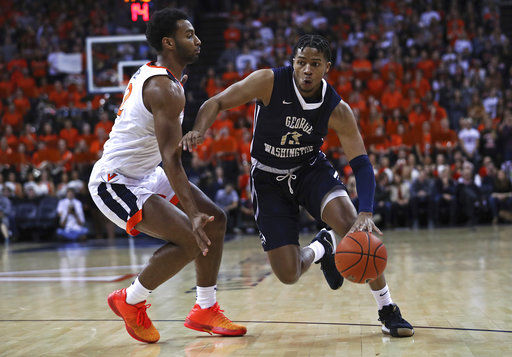 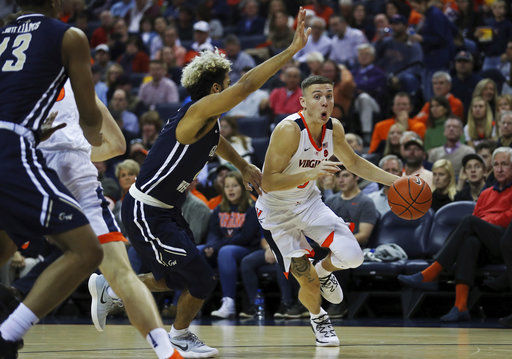 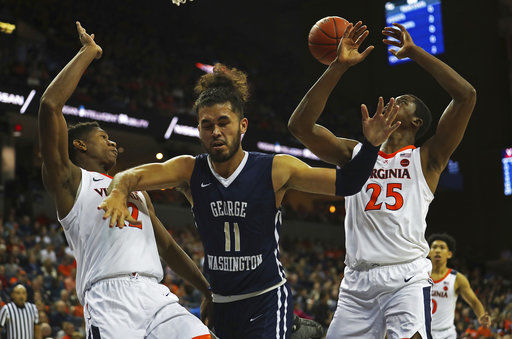 George Washington's Arnaldo Toro (11) loses a rebound between two Virginia defenders in the first half of an NCAA college basketball game Sunday, Nov. 11, 2018, in Charlottesville, Va. (Zack Wajsgras /The Daily Progress via AP) 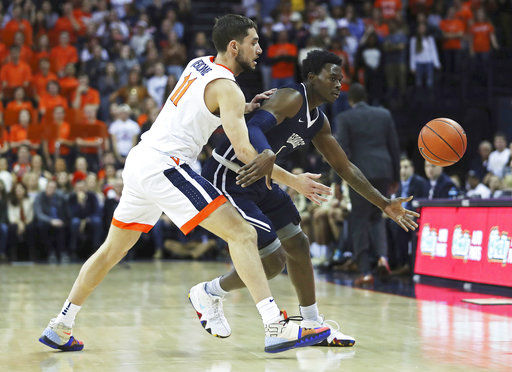 George Washington's Arnaldo Toro (11) loses a rebound between two Virginia defenders in the first half of an NCAA college basketball game Sunday, Nov. 11, 2018, in Charlottesville, Va. (Zack Wajsgras /The Daily Progress via AP)

CHARLOTTESVILLE, Va. (AP)  Grant Kersey looked out of place when he checked in at the scorer's table with just over a minute to play.

Virginia's game against George Washington had long been decided, and the team manager was wearing a jersey that looked borrowed from a much larger player, one with the number 1 and with the word "Virginia" on the back where every other player has their last name.

The crowd roared when he checked into the game with 1:06 to play, and then got louder when he was fouled with 44 seconds left.

His first shot made him part of Virginia history.

The crowd got even louder.

"I knew I couldn't miss it bad," said Kersey, who played high school ball in Charlottesville. "It went in so I was like, 'All right, I'm good.'"

The fifth-ranked Cavaliers got 20 points each from Kyle Guy and Ty Jerome in a 76-57 victory against George Washington on Sunday, but after they jumped to a 21-4 lead and stretched it to 42-17 by halftime, the moment in the spotlight for Kersey was certainly a highlight.

To coach Tony Bennett, Kersey's free throws wasn't even his savviest play. Caught dribbling out the clock at game's end, Kersey realized the shot clock was going to expire before the game clock did, so rather than allowing himself to add a turnover to his stat line, he passed it.

"I looked to the bench and they were like, 'Don't shoot it,'" he said, explaining his intentions. "I wasn't going to shoot it, but I was like, the shot clock is still on, that means whoever has it is going to get a turnover, so I just held it a little bit and just passed it away."

And earned kudos from his coach in the process.

"I actually was impressed with that crafty move at the end," Bennett said.

Guy scored 17 in the first half, matching the Colonials' total, as Virginia (2-0) opened the big advantage.

The Colonials (0-3) attempted to make a run in the second half, making six of their first nine shots, including four 3-pointers. They got within 42-25 by scoring the first eight points after halftime, but Virginia scored the next six and the visitors never threatened again.

Even so, coach Maurice Joseph appreciated that they never gave up.

"Some grit, fight," he said of what he liked from his team. The only senior on the roster is walk-on Malcolm Bashari-Rashed.

"We're a team that's young and inexperienced," Joseph said. "We're not going to pay a great deal of attention to our record. We're going to focus on growth and the process and really getting better. As disappointed as I am that we lost the game today. I'm going to take a lot of positives home."

The Colonials made only two of their first 14 shots as Virginia raced to a 21-4 lead over the first 11 minutes.

Virginia's victory was its eighth in the last nine meetings.

Bennett has occasionally added devoted team managers to the roster for home games, and Kersey, a senior, is the latest to earn the honor. He also played in Virginia's opener but didn't score.

Bennett joked that Kersey will have to earn his own jersey, and one that fits. Kersey and teammate De'Andre Hunter confirmed that one is on the way.

While Kersey enjoyed playing with the school's name on his back, he'll like the new one when it arrives. It will bear No. 13 and, if it arrives in time, could make its debut when Virginia hosts Coppin State next Friday.

George Washington: The Colonials blew a 22-0 lead in their opener, losing 77-74 to Stony Brook in overtime, and things have only gotten more difficult since. They followed with a 69-61 loss to Siena and, after the loss to Virginia, next play No. 18 Michigan in the Hall of Fame Tipoff Tournament in Connecticut.

Virginia: Freshman Kihei Clark continues to impress and has provided a spark for the Cavaliers in both games. He led the team with six assists in their opener against Towson and, at 5-foot-9 and very quick, makes the kind of pesky defensive plays that will quickly make him a favorite of the defense-loving Virginia fans.

George Washington: The Colonials are back on the road next Saturday facing No. 18 Michigan in the Hall of Fame Tipoff Tournament in Connecticut.

Virginia: The Cavaliers will complete a three-game homestand as they host Coppin State next Friday.