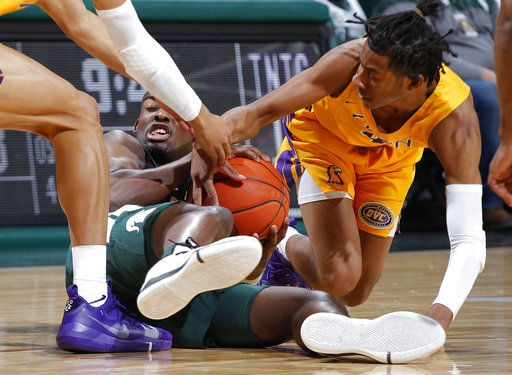 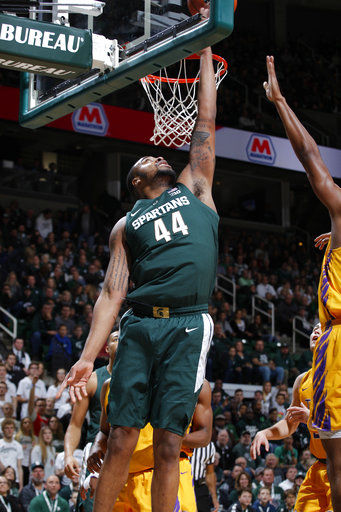 Michigan State's Nick Ward (44) gets a reverse layup against Tennessee Tech during the first half of an NCAA college basketball game, Sunday, Nov. 18, 2018, in East Lansing, Mich. (AP Photo/Al Goldis) 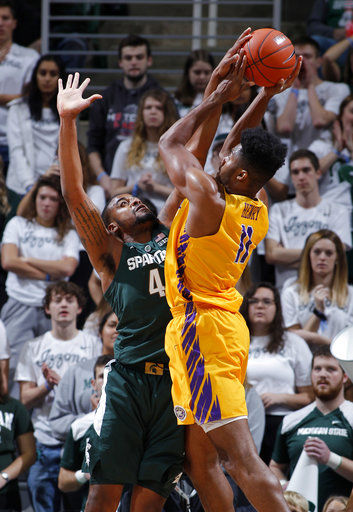 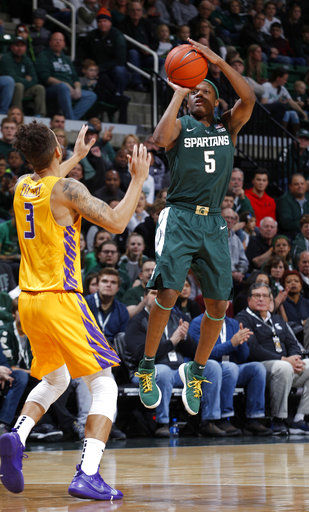 Michigan State's Nick Ward (44) gets a reverse layup against Tennessee Tech during the first half of an NCAA college basketball game, Sunday, Nov. 18, 2018, in East Lansing, Mich. (AP Photo/Al Goldis)

His play was anything but.

The junior forward scored 23 points, including the first eight points for the No. 11 Spartans, in a 101-33 victory, tying the largest margin of victory in program history.

"I was just working as hard as I can," Ward said. "I just ran my lanes, posted deep. I just did what I could for my team to win."

Cassius Winston added 19 points for Michigan State (3-1), which equaled the margin of a 121-53 victory against Morehead State on Dec. 1, 1992, when Shawn Respert scored 32 points to lead the way.

Sunday it was Ward, who went to work right away, scoring with power moves in the post, finishing 10-for-12 from the field and grabbing six rebounds four nights after pounding the floor in pain several times after a fall.

"In practices, all spring, summer and fall, Nick has been better," Michigan State coach Tom Izzo said. "I think when you've never really been injured, you get scared.

"He is improving the right-hand jump hooks, he's not getting as frustrated with the double teams."

Ward missed the final 32 minutes Wednesday against Louisiana-Monroe with a right ankle sprain. He said the ankle was sore on Thursday and Izzo held him out of practice, but he returned to practice Friday and Saturday.

Tennessee Tech (0-5) closed the deficit to 23-14 with a Corey Tillery 3-pointer with 7:42 left in the first half until a Spartans' explosion.

"There were minutes in the first half where I thought our defense really improved, it looked OK," Tennessee Tech coach Steve Payne said. "You keep playing these dudes, they'll put it on your head. At some point, they're going to get you. They got us pretty good."

Tennessee Tech: Games against Memphis, No. 7 North Carolina and No. 11 Michigan State have the Golden Eagles more than ready for Ohio Valley Conference competition. It gets much easier from here.

Michigan State: The Spartans licked their wounds after the opener against Kansas with three straight wins. Next, tougher tests await in Las Vegas.

The Spartans had their third straight rough 3-point shooting half early Sunday, but responded after halftime.

"The only negative to me was the number of wide-open threes we missed in the first half," Izzo said. "I told the guys I thought we were shooting them 3 or 4 feet behind the 3-point line. Then we started getting up to that line and getting a few inside-out passes, I thought we knocked down some big three in the second half."

Tennessee Tech's Courtney Alexander II attempts his free throws underhanded like Hall of Famer Rick Barry. Alexander was 1-for-4 on Sunday and is now shooting 7-for-25 on the season (28 percent).

He changed his routine before last season and improved to 51.6 percent after hitting just 34.5 percent in his first two seasons.

Alexander's father is Courtney Alexander Sr., who played three seasons in the NBA after being drafted No. 13 by Orlando out of Fresno State.

It was an exciting feeling, an exciting opportunity," Hoiberg said, adding that his dad texted congratulations after the game. "I was just trying to make a couple free throws, that's all I was trying to do, but it worked out in a good way."

Tennessee Tech: After three road losses, it's back to Cookeville where the Golden Eagles will play Louisiana-Monroe on Friday.

Michigan State: The Spartans play No. 20 UCLA on Thursday in the Las Vegas Invitational opener. Then, a game with either No. 7 North Carolina or Texas follows Friday.