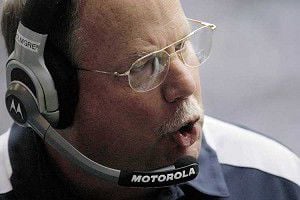 Seattle Seahawks coach Mike Holmgren talks to his team on the sidelines during the first quarter of an NFL football game against the Dallas Cowboys on Thanksgiving Day in Irving, Texas. <BR><I>AP photo 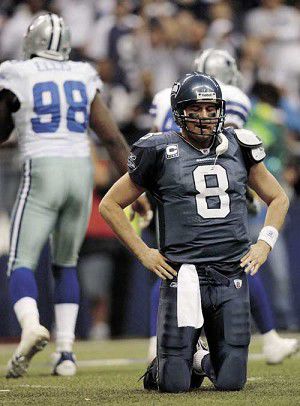 Seattle quarterback Matt Hasselbeck (8) is slow to get up after being sacked during the third quarter of an NFL football game against the Dallas Cowboys, <BR><I>AP photo

Seattle Seahawks coach Mike Holmgren talks to his team on the sidelines during the first quarter of an NFL football game against the Dallas Cowboys on Thanksgiving Day in Irving, Texas. <BR><I>AP photo

Seattle quarterback Matt Hasselbeck (8) is slow to get up after being sacked during the third quarter of an NFL football game against the Dallas Cowboys, <BR><I>AP photo

IRVING, Texas - The Dallas Cowboys knew only the best-case scenario could salvage their season.

That included Tony Romo returning to form despite a broken finger, Terrell Owens becoming happy and productive again and the defense getting stingy about touchdowns and greedy with sacks.

Now that they've done that, it's time for the hard part - maintaining it.

Romo had another 300-yard passing game, Owens scored again and DeMarcus Ware had three of the team's season-high seven sacks Thursday in a 34-9 romp over the stumbling Seattle Seahawks that sends the Cowboys into December with a three-game winning streak.

"Obviously this helps out a lot, but I think somebody in the locker room said last week, if the season ended today, we're still left out (of the playoffs)," said tight end Jason Witten, who contributed with season bests of nine catches for 115 yards with a TD. "You've got to have that mentality and understand the challenges that are ahead."

Such as an upcoming stretch of games against Pittsburgh and the New York Giants, both division leaders, before their Texas Stadium finale against Baltimore.

Dallas (8-4) is still far from guaranteed a playoff spot, but has recovered from a 2-4 midseason rut to get back near the top of the NFC wild-card race.

"If you ask him, I think he would say he is not 100 percent, but he is getting there and I think he is ready to come out of that splint," Owens said. "He is doing a great job."

Even with that protective device still covering his pinkie, Romo was 22-of-34 for 331 yards with three more touchdowns. Four days earlier in a 35-22 victory over San Francisco, he passed for 341 yards and three scores.

T.O. followed his 213-yard receiving game Sunday with five catches for 98 yards and a TD. He would have had another 100-yard game if he hadn't dropped a wide-open slant on Romo's last pass with 6:19 left in the game.

The Seahawks, who got three field goals from Olindo Mare, lost their fifth straight game and fell to 2-10. It matches the most losses for outgoing coach Mike Holmgren in his 17 years in the NFL, with four games still to play.

"The defense isn't stopping them when we need to. The offense gets the ball and isn't scoring," safety Deon Grant said. "It makes for a long day. That's what it was, a long day."

Julius Jones fumbled on Seattle's opening drive in his first game against his former team. The Cowboys then drove for a 14-0 lead on a 2-yard touchdown run by Marion Barber, the running back Jones lost his starting job to in the playoffs last January before leaving in free agency.

Jones had 37 yards on 11 carries, and was booed heartily by Cowboys fans each time he touched the ball.

"It's a term of endearment to me," Jones said. "It just means they respect you."

Barber had 10 carries for 32 yards, running only once after halftime because of a dislocated pinkie toe on his right foot sustained in the first half.

Only a few plays after Barber had a 4-yard gain in the third quarter and went to the sideline for good, Ware sprained his left knee. Ware dropped to the ground after his leg twisted awkwardly while rushing Seattle quarterback Matt Hasselbeck.

"I'm optimistic about both of them," Cowboys owner Jerry Jones said after the game. "They're thumbs up."

Ware walked off the field under his own power after being tended to by Cowboys trainers, and came back for the postgame celebration. His three sacks pushed his season total to 15, passing Joey Porter's 14 1/2 for the NFL lead.

Ep. 194: The latest in Husker football recruiting and putting a bow on Nebraska baseball's run