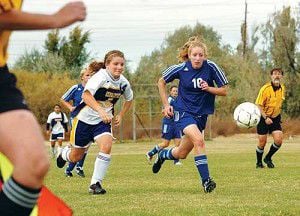 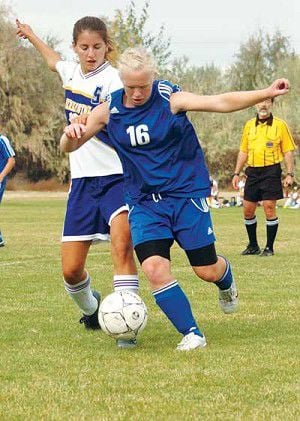 Though the Cowgirls (0-11-2, 0-5-1 IMC) controlled the ball for much of the game and had plenty of opportunities to score, the Bulldogs (5-7-1, 2-4 IMC) kept the theme of tough defense to hold the Intermountain Conference opponents out of the net.

The narrow win came after a similarly paced 1-0 loss Friday to Bend in which the Bulldogs were nearly impenetrable on their own end of the field.

"We've started to work together a lot better," senior defender Aneava Lane said. "We're talking to each other more and playing better. It's better to get it down later than never."

Hermiston got its goal in the 20th minute from Kelli Jones off an assist from Jenny Cardenas, and though Jones and fellow forward Amanda Smith each had a handful of shots the rest of the way the Bulldogs couldn't put up a security goal.

Crook County coach Libby Rodgers said she was very happy with her team's performance, especially the pressure they put on Hermiston defense.

"We kept it on their half and had better possessions, I thought," she said. "They just got the one that squeaked by and we didn't."

Both teams fell out of playoff contention Friday, but for the young Bulldogs the building process has been rewarding, especially as of late.

One of Hermiston's objectives this season was to cut down on opponents' goals, specifically goals scored by Bend, Mountain View and Summit. After giving up 18 combined to those three schools last season, Hermiston held the trio to nine this season.

Though the five seniors on the team won't reap the benefits of the growth, coach Joe Cobb said they have been instrumental in the helping the program improve.

"The seniors this year have helped the team get better in a lot of the ways," he said. "Aneava and Kayla (Sharkey) are a little bit mother and a little bit drill sergeant, and a girl like Amanda (Smith) helps with not just her skill on the field, but what she brings to the team's mentality."

Hermiston finishes the season Thursday at Pendleton in a game which Cobb hopes showcases how far the Bulldogs have come.

"What we've learned about playing Pendleton is that they always get better, and they're always ready for us," he said.

Watch now: Here's what Frost, Husker players are saying on the Monday of Purdue week