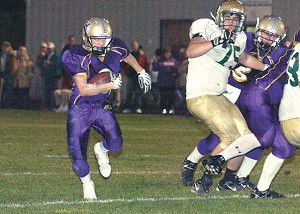 Hermiston's Tyler Green (top)?and Faafiaula Ena (bottom) carry the ball during their Nov. 1 game against Pendleton. Both players will be looking for big games when the Bulldogs host Corvallis at 7 p.m. Friday at Kennison Field in the second round of the OSAA?Class 5A State Championships.<BR><I>Staff photos by Sarah Britain 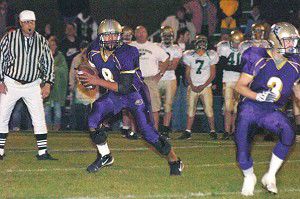 Hermiston's Tyler Green (top)?and Faafiaula Ena (bottom) carry the ball during their Nov. 1 game against Pendleton. Both players will be looking for big games when the Bulldogs host Corvallis at 7 p.m. Friday at Kennison Field in the second round of the OSAA?Class 5A State Championships.<BR><I>Staff photos by Sarah Britain

The last time Hermiston won a second-round football playoff game, Mark Hodges was on the sideline.

Just not the right sideline.

Hodges and his North Medford Black Tornados came into Hermiston in 2002 and fell to the Bulldogs, paving the way for Hermiston's first and only trip to the state quarterfinals.

The players hope Hodges is again good luck for them Friday at home as they take on Corvallis in the second round after a bye week.

With all the momentum the team had built through the final weeks of the season, a first-round bye into the playoffs could seem to be a distraction. But Hodges said the Bulldogs have stayed sharp, focused and productive over the week-and-a-half since finishing the regular season against Pendleton and are prepared for the game.

"You've got to handle bye weeks right, but they're excited to start the second season," Hodges said about the Bulldogs.

Hermiston (6-3) has never faced Corvallis in the postseason but enters with a clear game plan to take advantage of its only home game of the playoffs. With a win the Bulldogs will play on the road the following week and both the semifinals and state championships will take place on turf.

The Spartans (6-4), also coming off a bye, bring a well-balanced attack with sophomore tailback Dominic Wooten a threat to both carry and catch the ball.

Hodges compared Orman to Pendleton's Jake Talbot, an athletic QB with the ability to extend plays and make things happen on the field.

"They're a team I've noticed that gets better defensively as the game goes on," Hodges said. "That's the sign of a well-coached team. They have the right mix of talented players and good coaching."

In response, Hermiston will try to keep its own game balanced, giving quarterback Faafiaula Ena plenty of room to work with his stable of receivers and using senior back Tyler Green to keep the defense honest.

With Corvallis' propensity for a strong second half in mind, Hermiston will try to get its offensive rhythm going early and not rely on the third quarter to build a lead as it did against Pendleton.

The Spartans are just two seasons removed from a state championship, in which they also rose from the No. 2 seed to beat conference rival West Albany for the title.

Photos: Recruits get a taste of Husker football at Friday Night Lights