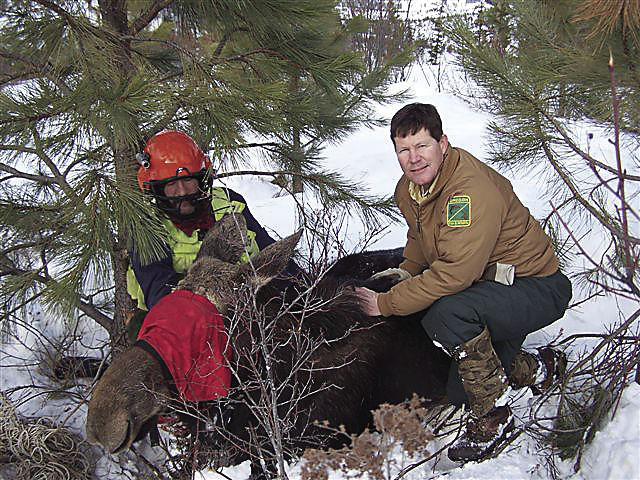 ODFW workers tag a moose in the mountains of northeast Oregon. Biologists are encouraged by the animal's population in the area and are optimistic a hunting season could be established in the near future. 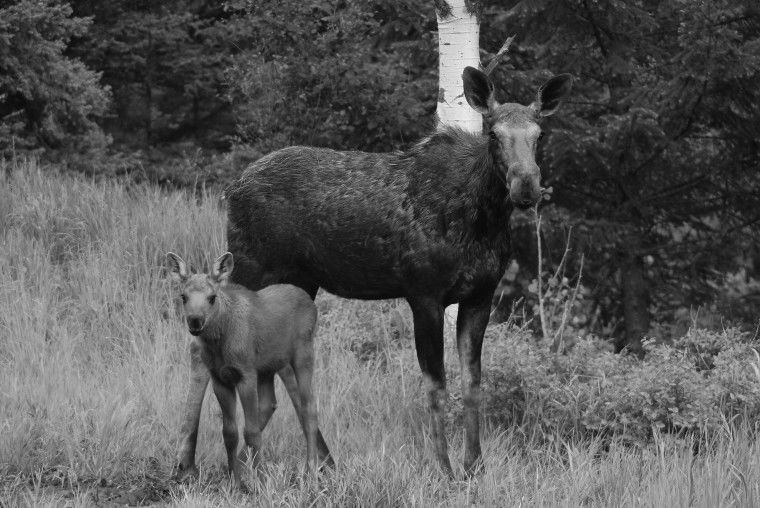 A cow moose and her offspring are seen during the summer months in the mountains of northeast Oregon. Biologists are encouraged by the animal's population in the area and suspect an established hunting season may not be too far off.

ODFW workers tag a moose in the mountains of northeast Oregon. Biologists are encouraged by the animal's population in the area and are optimistic a hunting season could be established in the near future.

A cow moose and her offspring are seen during the summer months in the mountains of northeast Oregon. Biologists are encouraged by the animal's population in the area and suspect an established hunting season may not be too far off.

Pat Matthews is a detective.

Like most detectives, he looks at each case carefully  searching for evidence, considering all the suspects and pondering the fate of each victim.

But, unlike the infamous Dick Tracy and Sherlock Holmes, Matthews doesnt work the dim-lit backstreets of a large city. His beat includes the rugged Wallowa Mountains and the dense forests of northeast Oregon.

Matthews is a wildlife biologist for the Oregon Department of Fish and Wildlife.

His daily routine might find him flying over a herd of elk  counting their numbers and checking their overall health. The next day he might be loading up Rocky Mountain goats and trucking them to a release site. And when his critters are ill hes often called to figure out their suffering.

Bighorn sheep seem to be a bit sensitive to a number of ailments, so his time is often spent dealing with their needs. Lately, moose have drawn his attention.

History is a bit sketchy as to whether moose are native to Oregon. In the past several years, though, these animals have been making a pronounced movement into northeast Oregon  especially in the lower Wenaha and Grande Ronde river drainages.

As early as 1987, poachers killed two moose in the Umatilla National Forest and several sightings have occurred in Umatilla County. Two cows and one bull were recently sighted north of Pendleton and one, large Baker County bull made the front page of their newspaper this fall.

To get a better handle on local moose movements and biology, six adults were captured in January 2009, using a net gun fired from a helicopter. These animals, one bull and five cows, were fitted with tracking collars.

Funding for the collars was provided by the Umatilla National Forest and the Oregon Hunters Association. In the following months, one cow disappeared, one cows collar quit working and two cows are still being tracked. The other two, the bull and a cow, were found dead.

Due to the stage of decomposition in the carcasses, it was difficult to determine the cause of their deaths. It didnt appear they had been shot or killed by predators. Although Matthews is careful not to confirm the cause of death without more evidence, he suspects the moose fell prey to arterial worms.

These worms enter the moose through the bite of a horse fly. The horse flies acquire the larval stage of the worms when they feed on the ears or facial skin of a mule deer.

Once in the moose, the worms larvae travel to the carotid artery where enough of them can actually block the animals blood flow. Matthews suspects the arterial worms killed the moose due to his observations of other moose in the area.

Some showed signs of ear cropping  an early sign of moose with arterial worms. In January 2009, Matthews observed a cow moose on the Wenaha Wildlife Area with a lack of coordination in her back legs  another sign of arterial worms. The cow was collared and found dead two months later. She was carrying twin calves.

Despite the setbacks, Matthews is optimistic about moose in Oregon. Moose relish large areas with deciduous browse like willows, alder, ceanothus and cottonwoods  often promoted by clearcuts.

They tend to avoid large expanses of open range. Being quite large and dark-colored, they also like dense forests for cover during hot summer periods. Curiously, they appear to prefer areas of deep snow during winter. This mix of habitats and elevations are abundant in northeast Oregon.

Matthews even suggests the possibility of limited hunting opportunities in the not-too-distant future. That is if the moose population doesnt become unduly hampered by parasites and any other unforeseen maladies.

No more moose have been found dead with arterial worms since the summer of 2009, although it is known that many are still carrying the worms.

Last winter, four more cow moose were collared and are being tracked. Matthews hopes to ground-dart a bull and place a GPS collar on him. With these efforts, Matthews hopes to continue gathering data on habitat preferences, movements and reproduction. Hed like to get more information on moose parasites, especially the arterial worms.

Most certainly, Matthews will have at his command the latest in evidence-gathering and GPS technologies with orbiting satellites, advanced electronics, helicopters and a high-tech forensics lab. Tracy and Holmes would be so envious.