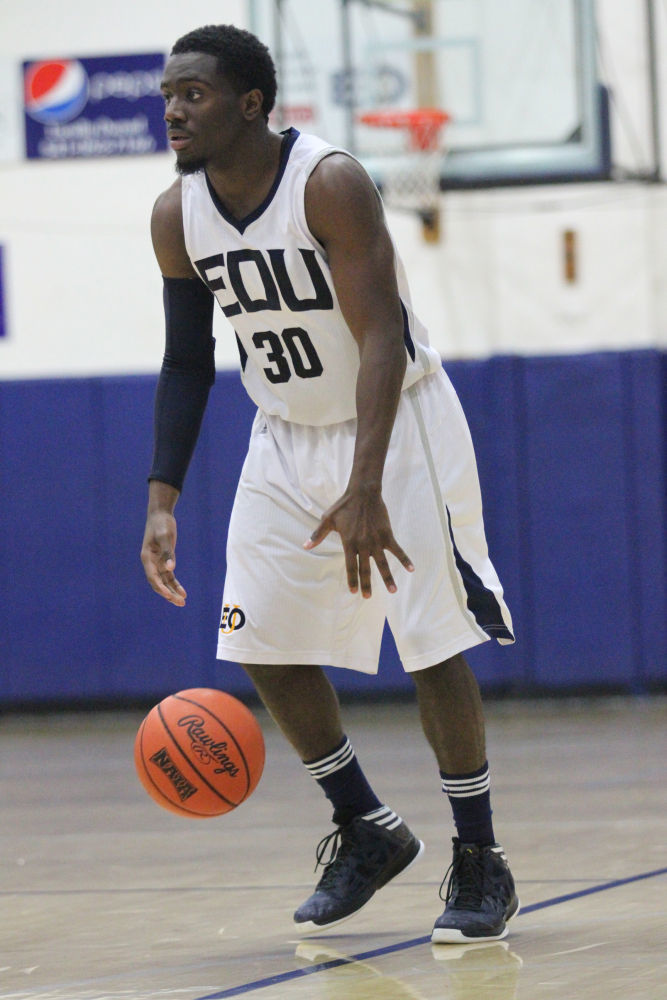 <p>Tony Eackles scans the defense during a Mountaineers game during the 2012-13 season.</p> 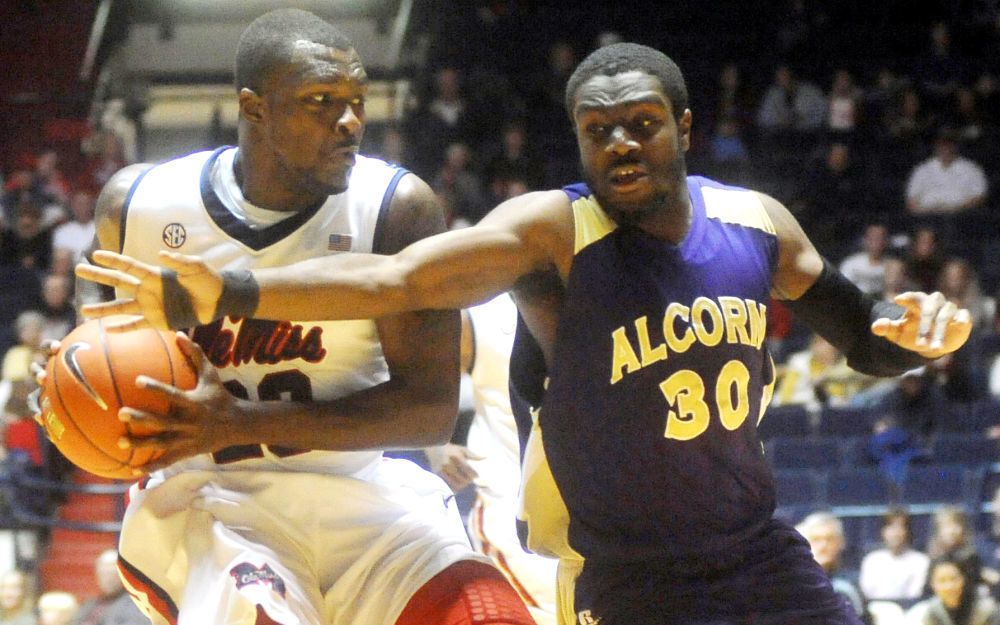 <p>Tony Eackles scans the defense during a Mountaineers game during the 2012-13 season.</p>

Couple that with the facilitys low overhang, and the Kirkland, Wash., programs digs had Eackles feeling a hint of claustrophobia.

He wasnt in the Southwestern Athletic Conference anymore, and playing a meaningful conference game in front of a listless crowd in a cracker-box gymnasium asserted that fact.

This was the Cascade Collegiate Conference, an NAIA league where half of its members have the enrollment numbers of large high schools and commensurate facilities.

Not that the NCAA Division I SWAC, where the 6-foot-3, 220-pound Eackles earned substantial playing time as a freshman and sophomore at Alcorn State University, was the apex of collegiate hoops.

In fact, the SWAC  comprised of historically black universities  has been a low-major conference that rarely sends more than a single team to the NCAA tournament.

Alcorn State had a pair of forgettable seasons in Eackles two years, but the non-conference slate was of the murderous variety with high-majors Kansas, Ohio State, Kansas State, Texas A&M, Mississippi, Arkansas, Purdue and others dotting the schedule.

And the wet-behind-the-ears Eackles, who was in and out of the starting lineup, was thrown right into the fire.

In his first-ever collegiate game Eackles and the Braves traveled to Columbus to face No. 16 Ohio State, led by eventual AP player of the year Evan Turner.

Three weeks later, he was playing in front of a raucous, sellout crowd of 16,000 at Allen Fieldhouse against top-ranked Kansas, which boasted seven future NBA draft picks. The Braves got lambasted 98-31.

Eackles, now EOUs senior scoring leader (18 ppg) and team captain, has seen both sides of the collegiate basketball spectrum, but still gets taken aback when he finds himself competing in a rec league atmosphere.

Through it all, from his days as a prep basketball standout in east Las Vegas, to his tenure at Alcorn State and his two-years in La Grande, hes been a purist and has never lost perspective.

It doesnt matter if its sellout or theres 20 people in the stands, said Eackles, who will receive his degree in Media Arts and Communications this spring. At the end of the day, its basketball.

The road to La Grande was a circuitous one, though.

In Eackles two seasons at Alcorn State, the Braves went a combined 6-53, prompting the firing of head coach Larry Smith.

After a sophomore season that included a broken wrist against Texas A&M and inconsistent minutes upon return, Eackles was in the Las Vegas airport on his way back to Mississippi after spring break.

He got the call before boarding: Smith was out.

I hate losing more than I love winning, Eackles said. I wanted to stay, but I didnt really want to be part of rebuilding again with another coach.

When Eackles opted to transfer he didnt think finding a program would be an arduous task.

He figured Smith, who was still employed with the school as the director of athletic development, would give his former gunner some leads and a good word, to boot.

I never heard from (Smith) again, Eackles said. I couldnt get a recommendation from him. I couldnt get him to return my calls. He just disappeared, really.

That summer, Eackles returned to Las Vegas, sending out a slew of e-mails and phone calls to coaches from various NCAA Division I programs.

He waited for responses that never came. Summer had come and gone, and he still hadnt received an offer.

Hed have to sit out the 2012-2013 season and came to the crushing realization that hed be playing small-college ball.

During his lull, though, he was in 6:30 a.m. basketball workouts six days a week and was aided by his former high school coach.

He worked a handful of odd jobs, and had grown impatient. At this point, just about anywhere with a competitive basketball program would have fit the bill.

Montana State-Northern, an NAIA program in Havre, fresh off a national tournament appearance, knew Eackles was on the market and did enough to woo him to the oft-chilly part of the country.

But Eackles hadnt even visited the desolate school and when he did make the trek up north, he left with mixed feelings.

I flew into Billings, then had like a four-hour drive, Eackles recalled. And this was in December when it was really cold. There was nothing out there and I was just kept thinking to myself What am I getting myself into?. I was just so anxious to to play again.

It didnt take long for Eackles and MSU-Northern coach Shawn Huse to figure out that it wouldnt be the best fit.

Eackles was on the market again, but it wouldnt be for long.

An MSU-Northern assistant got in touch with former EOU assistant Josh Cottle, and it was enough for erstwhile EOU head coach Isaac Williams to bring Eackles on a visit.

Eackles took a Greyhound bus from Vegas to La Grande to watch EOU  ranked in the NAIA top 25 at the time  take on Warner Pacific and Concordia in a weekend doubleheader.

We had good kids and a good atmosphere, said Williams, who is now an assistant at Boise State. We sold him on that.

A handful of NAIA programs in Califorinia and few Canadian schools wanted Eackles, too.

Eackles, who admittedly never heard of the NAIA until getting interest from MSU-Northern, immediately saw the distinction between NCAA I and NAIA levels.

When I watched EOU play, the first thing I thought to myself was, Some of these guys are not athletic at all, Eackles said. But everyone can shoot, and theyre executing. At (Division I), guys are putting their elbows to the rim, and thats the biggest difference.

But Eackles was sold on EOU and Williams was sold on the ultra-athletic guard as a person and a basketball player.

In his junior season, Eackles went on to earn all-CCC honors as the Mountaineers climbed as high as No. 1 in the NAIA polls and won the conference outright.

What impressed the former EOU coach the most about the well-spoken Eackles was his amiable demeanor, even through the adversity.

Hands down his best quality is that hes just a positive person, Williams said. Regardless of whatever sort of adversity hits him. Hell bounce back regardless.

When the Mountaineers fell at Southern Oregon last season, the teams first loss of that year, Eackles had perhaps the worst game of his collegiate career.

Williams opted to not start him the next night at Oregon Tech, and he ended up coming off the bench the remainder of the season.

His team-first approach didnt waver and he embraced his reserve role.

Hell be somebody that Ill be happy to watch grow up, Williams said. And well still be close when were old men.

As a senior, Eackles has emerged as the leader on a team that began the year rife with transfers and underclassmen.

When all-CCC guard J.D. Estes didnt return for his senior year, Eackles  a natural combo guard  has had to shoulder most of the responsibility in the backcourt.

The Mountaineers (14-9, 5-8) have been sporadic this season, but have recently hit their stride in winning three of their last four conference games.

First-year head coach Jared Barrett isnt coy about where EOUs offense starts, either. If the Mounties arent running a set play, the physically-gifted gunner has the ball in his hands.

If I dont have (a set play) we let the guys play and set picks on the ball, Barrett said. Tony really thrives in that kind of basketball. We run a lot of what we do through him.

His hometown buddy Pierre Jackson  a former Baylor and College of Southern Idaho star  has been on a tear in the NBA Development League with the Idaho Stampede, and Eackles hopes the same opportunity surfaces.

Basketball is my life, Eackles said. You have to go with the flow of life and do what makes you happy.

Dak sees himself in Dallas for "Rest of my career"