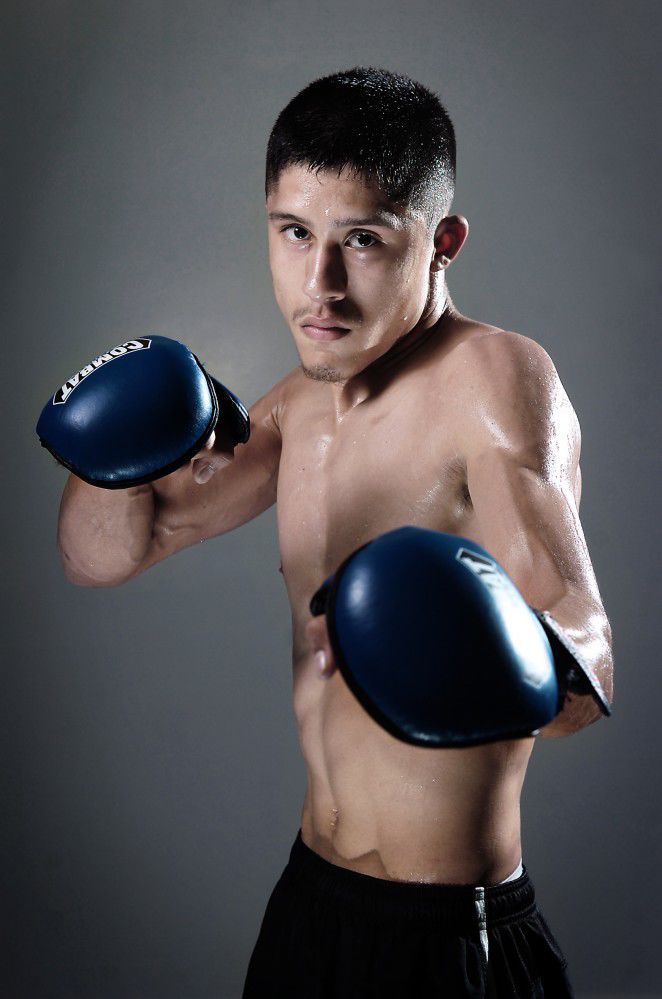 <p>Abraham Campos of Hermiston has used mixed martial arts to focus his anger and aggression, transforming himself from troubled youth to ultimate fighter.</p> 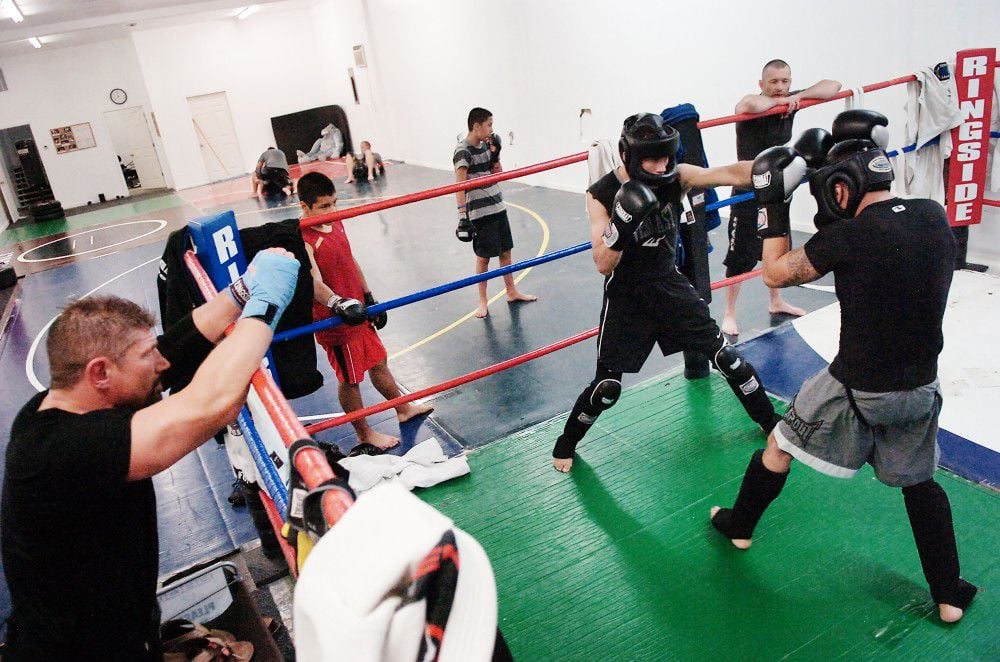 <p>Abraham Campos, in all black, of Hermiston punches Noe Jaimes, in gray shorts, of Hermiston while sparring Wednesday at the Straight Blast Gym in Umatilla.</p><p></p> 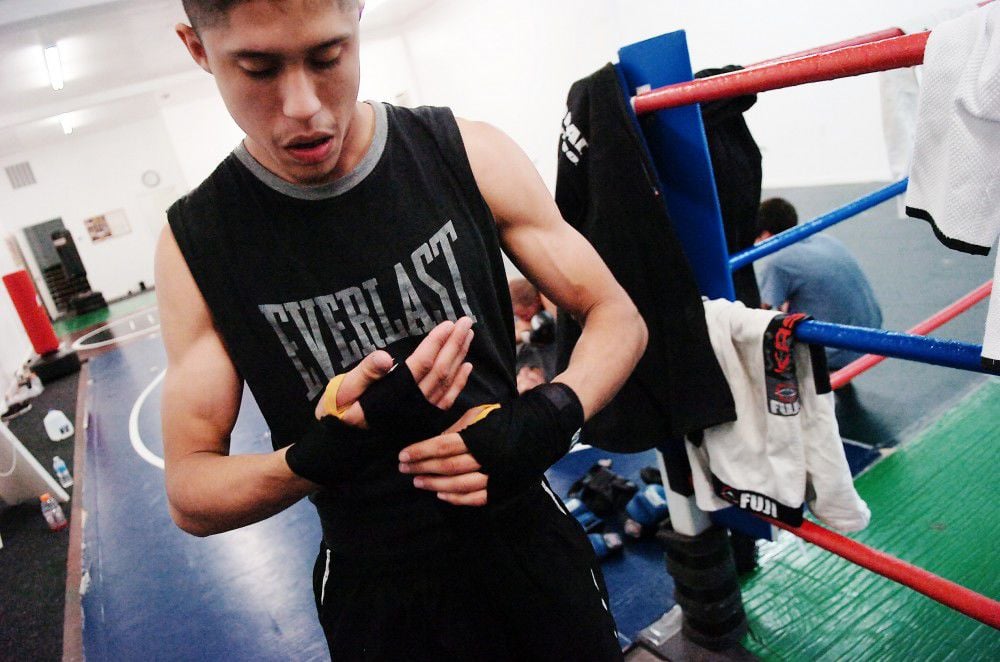 <p>Mixed martial artist Abraham Campos of Hermiston tapes up his hands before training at the Straight Blast Gym in Umatilla on Wednesday.</p>

<p>Abraham Campos of Hermiston has used mixed martial arts to focus his anger and aggression, transforming himself from troubled youth to ultimate fighter.</p>

<p>Abraham Campos, in all black, of Hermiston punches Noe Jaimes, in gray shorts, of Hermiston while sparring Wednesday at the Straight Blast Gym in Umatilla.</p><p></p>

<p>Mixed martial artist Abraham Campos of Hermiston tapes up his hands before training at the Straight Blast Gym in Umatilla on Wednesday.</p>

Fighting for breath in the heavy, damp air, as equally suffocating as McWiggins grasp, Campos unleashes several lightning bolts to loosen the trap. His strikes, exceeded in speed only by shuddering force, are the last remnants of a life hes long battled to vanquish.

Where his temper and physicality once brought him to the laws front door, promising to ruin a life before it had really begun, the 18-year-old has thrown the reins around his punches. A channel exists for the mixed martial artist in Umatilla.

And it has him finally headed in the right direction.

When Abraham Campos started high school, he made some new friends. His new crew had different ideas of fun.

Fighting always catches my attention, he said. Its a way to release my anger.

By the time Campos entered his sophomore year that anger was building to dangerous levels. Schoolwork had lost all priority. Suspensions began to pile up. Drugs were taking over.

Control was slipping away and Campos didnt like it. Hed seen Straight Blast Gym in Umatilla dozens of times, its Sixth Street locations doors catching his eye on the main thoroughfare in town. A few times he stepped into the sauna-like atmosphere with its padded floors and sparring ring, but something wasnt quite right. The fights were controlled, not raw.

So things got worse at school.

Feeling their son slipping away, his parents recommended a change. If he would, please, enroll in the Oregon Youth ChalleNGe Program, things would be better. The program, a National Guard sponsored alternative school boot camp in Bend for troubled youths, would help bring back the boy they used to know.

Leonardo Campos, Abrahams father, saw it as a last resort. The son saw it as a betrayal.

I thought they wanted to keep me out, he said.

The junior Campos finally agreed. Hed do his time and get through it, he thought. Maybe things would even improve.

But one of the things that convinced him was that he did want to change, Leonardo Campos said. Like a lot of kids, they want to change but they dont have the power to say no. To say no to other kids.

Campos attended the OYCP camp for 22 weeks. The physicality of the experience spoke to him. Every day was scripted.

They break you, Campos said. You go in there thinking youre tough. Youre not. You hate your family? You find out you miss them more than anything.

Two years later, Campos is back in the Straight Blast Gym. Since exiting the ChalleNGe program, hes tried to recreate that environment in his daily life. Each day involves some kind of strenuous exercise. Martial arts in the gym, weight lifting or running fill the gaps in his life when hes not working full time at Worley Surveying Services, based in Kennewick, Wash.

Exercise is a way to transmit all my anger and frustration, he said. The gym, its just a place to relax.

On a Tuesday night this month, Campos trains for his third professional MMA match, rolling with any partner he can find. The research gym owner Justin Evans finds on the next opponent suggests Campos will encounter a grappler in his 145-pound bout. Hell meet Dylan Westwang, a 20-year-old submission wrestler with a 1-3 career record, on Saturday as part of the Rumble @ the Roseland 65 event in Portland.

In preparation, Campos locks up with McWiggins, a wrestling rock of a man from East Wenatchee, Wash., whos visited the gym often this summer while in Umatilla for work.

Our goal is to make the training so uncomfortable that the fight is the easy part, Evans says. It puts you in the worst case scenario.

McWiggins takes blow after blow before snatching Campos around the waist. The striker holds his ground, block ing takedowns by locking McWiggins legs with his and wrapping up the attackers head. Campos battles the move as long as he can.

But both men crash to the mat.

A moment passes while McWiggins catches his breath. But Campos is already on his feet, both hands building a cage around his head, and preparing for the next onslaught.

He strikes really good, the 15-year Jiu Jitsu veteran McWiggins says, gulping for air. I just need to get in there. I have to weather a few good ones first. He caught me with a nasty over-head.

Campos fought another wrestler in his MMA debut at the Roseland Theater in Portland in March. A combination of nerves and combat style differences led to a loss by decision. Hell be more prepared this time.

Like he was in his second fight in May. Quick kicks to his opponents ribs in the first round opened an opportunity for an earthquake right hook. The match ended right there, 24 seconds in when the referee stopped the action.

When Campos returned to Umatilla from his time at the OYCP, he was determined to avoid repeating previous mistakes. The 16-year-old avoided temptations by enrolling at Chiawana High in Pasco, Wash. Campos crammed his days full. Wake-up calls came at 5 a.m.  just like at camp.

Two years just went by so fast, like water, he said.

Campos graduated from high school in the spring, completing a turnaround his family never thought possible.

Hes changed worlds, Leonardo Campos said. He works so hard and is responsible. Hes trying to do the best he can.

The new man is working on his role model status, and not just for his three little brothers. Campos and his girlfriend are expecting a baby boy next month. Building a family  especially after learning to appreciate his own  has new meaning and motivation, he said.

Campos moved to Hermiston with his girlfriend this month, but still trains for his fights at Straight Blast Gym in Umatilla. The way he sees it, Saturdays fight is only the first in a long line. He wants to make a career out of martial arts.

Im going to put everything Ive got into this world and this life because its short, he said. Its always moving forward.

Because for Campos, going back isnt an option.

Watch now: Packers fans and 2 Buccaneers’ fans gear up for the big game