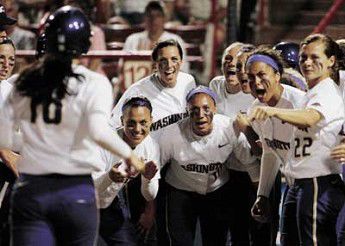 Morgan Stuart, left, runs towards home plate and waiting teammates after hitting a solo home run against Georgia in the third inning of an NCAA softball championship tournament game in Oklahoma City, Sunday, May 31, 2009. <br><I>AP Photo 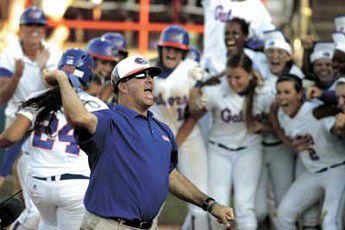 Florida's Tim Walton reacts as Ali Gardiner (#24) crosses the plate behind him at left, in the seventh inning, as Florida defeats Alabama 6-5 in an NCAA softball championship tournament game in Oklahoma City, Sunday, May 31, 2009. <br><I>AP Photo

Morgan Stuart, left, runs towards home plate and waiting teammates after hitting a solo home run against Georgia in the third inning of an NCAA softball championship tournament game in Oklahoma City, Sunday, May 31, 2009. <br><I>AP Photo

Florida's Tim Walton reacts as Ali Gardiner (#24) crosses the plate behind him at left, in the seventh inning, as Florida defeats Alabama 6-5 in an NCAA softball championship tournament game in Oklahoma City, Sunday, May 31, 2009. <br><I>AP Photo

OKLAHOMA CITY - Ali Gardiner was in a prolonged slump, her team was in a tough spot and she hadn't been on the best terms with her father lately.

All in one swing, all her worries were gone.

Gardiner hit the first walk-off grand slam in Women's College World Series history, lifting top-seeded Florida into the championship round with a 6-5 victory against Alabama on Sunday night.

It was enough to make her father cry.

"His dream was always to see me in a Gator uniform, and I was here and I was able to push our team to where we wanted to go," Gardiner said, tearing up herself. "It means a lot. To see my dad, who doesn't show much emotion - and the last few days we haven't talked much - it meant a lot to me."

Gardiner sent a 2-1 pitch from Alabama ace Kelsi Dunne (28-5) the opposite way, clearing the left-field fence as Whitney Larsen fell over the top as she tried to make a game-saving catch.

It was her first hit in 16 at-bats and followed a swing adjustment she made during Florida's day off on Saturday.

"I've been working to try to get out of my own head all week. I felt like I've never had to work harder to just get a base hit," said Gardiner, who'd seen her average drop from .438 to .298 over the last three months. "My last at-bat, I just went up there, cleared my mind and was just trying to make good contact and find a way on."

The Gators (63-3) won for the 29th straight time and will face third-seeded Washington in the best-of-three championship series beginning Monday night.

The Huskies beat Georgia 6-3 Sunday night to play for the championship for the first time since 1999.

Florida is in the World Series for only the second time, and got eliminated on the doorstep to the championship series a year ago as the No. 1 seed.

"I'm really glad that our team is where we wanted to be from day one," Gardiner said.

The senior first baseman from Waccabuc, N.Y., didn't think she got enough of Dunne's screwball, but Gators coach Tim Walton said he knew right away after watching several other wind-aided fly balls get pushed to the track in left field.

While Gardiner's teammates piled on top of her at home plate - leading to a half-dozen lost earrings in the process - Walton pumped his right fist in the air to a crowd of Gators fans along the third-base line.

"Ali Gardiner's been struggling more than anybody knows, but this is an All-American," Walton said. "This is a great kid."

Alabama (54-11) had rallied for four runs with two outs in the fourth inning to chase Stacey Nelson, who leads the nation with an 0.39 ERA. Nelson had allowed only three hits in back-to-back shutouts to start the World Series, but allowed an unearned run in the third before Kelsey Bruder's two-run home run put the Gators back ahead.

"I'm obviously upset, but we couldn't have done more," said Lauren Parker, who had an RBI single in the four-run fourth. "We came out and we fought til the end. We fought all season long. We faced adversity all season long.

"We just came out and showed what we had and did what we had to do to fight. Eventually, obviously, it didn't work out our way."

Danielle Lawrie, who walked in the deciding run in Georgia's 9-8 victory earlier in the day, made the most of her first chance at redemption. Washington loaded the bases with nobody out in the first inning against Erin Arevalo (1-1), and Lawrie hit an opposite-field drive over the fence in right field.

Brianna Hesson, who had drawn the bases-loaded walk in the first game, delivered a two-run single in the third to get Georgia within 5-3 but the Bulldogs couldn't come up with their third comeback win of the World Series.

In an event usually dominated by unhittable pitchers such as Lisa Fernandez and Jennie Finch, the runs have been plentiful and no lead seems safe at this year's World Series.

Only one grand slam had been hit in the previous 26 years of the World Series, but four were hit within a 24-hour span this year.

Georgia rallied from three-run deficits - a seemingly insurmountable hole in most years - on back-to-back days and bashed a World Series-record seven home runs.

The eight teams in the field also combined to surpass the records of 20 home runs hit during the 2003 World Series and 89 runs during in 1996.

Washington's Niki Williams, who had only two home runs all season, hit three in as many games at the World Series and set a new record with seven RBIs in Sunday's first game with a three-run homer and a grand slam.