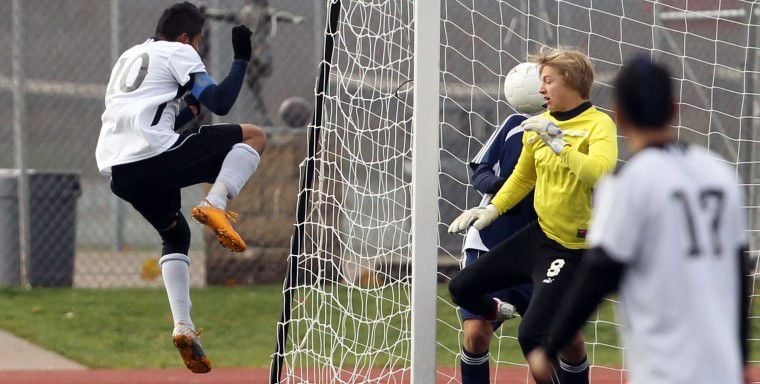 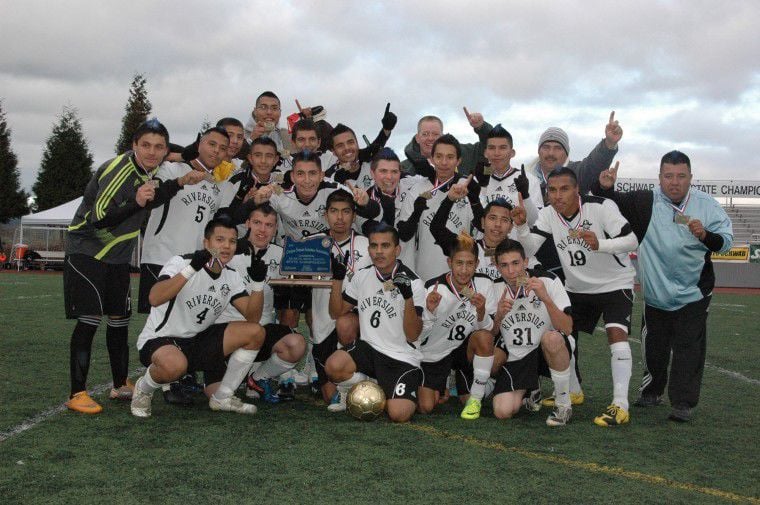 HILLSBORO  An undefeated season just wouldn't be complete without having that sparkling new OSAA Soccer State Championship trophy. For the No. 1-ranked Riverside Pirates boys soccer team, that's exactly what they got too.

The Pirates achieved their goal of a perfect season and brought home that impressive trophy by winning the Class 3A/2A/1A state title with a 2-0 victory over the St. Mary's Crusaders Saturday at Hillsboro's Liberty High School.

The senior duo of Jose Flores and Erik Ruiz scored second half goals to help lead the Pirates (19-0) over the Crusaders (15-2). Riverside, guided by seventh-year head coach Carlos Velasco, won its first ever boys soccer championship.

"After having some disappointing playoff losses in previous years, it sure is a nice feeling to finally win the state championship," said Velasco, whose Pirates were appearing in the finals for the first time since 2007. "I have to thank these kids for all the hard work they've done all year and it sure payed off for us today. They really played with all their hearts and they did everything they could to help us win the title."

Although Riverside dominated the time of possession offensively in the first half, it wasn't evident on the scoreboard as the two squads played to a scoreless tie in the first 40 minutes on a cloudy, cool and dry afternoon in Hillsboro.

"I wasn't too concerned about the halftime score, because I felt confident that we would eventually pull through and score some goals," said Velasco. "I told the kids to just continue their offensive pressure and keep putting the ball into the 18-yard box and that's exactly what they did in the second half."

Both squads were solid defensively throughout the season as they combined to allow a total of just 20 goals, as Riverside gave up only eight and St. Mary's allowed 12. Neither squad was about to give up anything in the first half as both played strong defense, evidenced by just a total of four shots on goal  two by each team.

Riverside's explosive offense, which totaled 163 goals this season, got on track in the second half while nearly everyone was pressing forward past the midfield line. Senior forward Jovanny Llamas, who recorded a total of 43 goals this season, nearly scored six minutes into the half.

Two minutes later, Ruiz knocked in a header off a Llamas corner kick, giving Riverside a 1-0 edge. About four minutes later, Flores and senior midfielder Joel Llamas also had near misses on a lengthy offensive possession in the Crusaders defensive territory.

"I think we were a little nervous earlier in the game, especially after (St. Mary's) almost scored a first-half goal," said Ruiz, a forward who led Riverside in scoring with 45 goals. "We played a lot better in the second half and we were more relaxed too, especially after we scored our first goal."

In the 73rd minute, Flores quickly dribbled around a couple of defenders and then booted in a shot from 13 yards giving Riverside a little more breathing room with a 2-0 advantage.

The Pirates then controlled the tempo of the game for the last seven minutes. Riverside held onto the ball with their short and accurate passing style of game.

"It feels great to have an undefeated season and bring home the championship," said Flores, who scored 39 goals this season. "I think we were all a little nervous in the first half and that's probably why we had only two shots. We found a way to get past their defense in the second half and that allowed us to create more scoring opportunities."

The game capped a magical season for the high-scoring Ruiz and an experienced Riverside squad that includes 11 seniors.

"It's hard to explain how happy I'm feeling right now," said Ruiz, who won the Player-of-the-Game Award along with Reid Arne of St. Mary's. "It just feels fantastic to win the championship and it's just an awesome experience."

It marked the second straight year the Crusaders lost in the finals, following a 1-0 loss a year ago to the Catlin Gabel Eagles. Velasco, 39, has led Riverside to the state playoffs six consecutive seasons and to the semifinals four of the last five years. The Pirates lost 2-1 to Oregon Episcopal in their previous finals appearance in 2007.

"It's so nice to win the title and it's definitely the highlight of my career," said Velasco. "We didn't want to lose in the semi's or the finals again and everything just worked out perfectly this year. I feel very proud of all the kids. I hope that the younger players will follow in the footsteps of this team and help Riverside continue a strong tradition of having a championship caliber squad again next year."