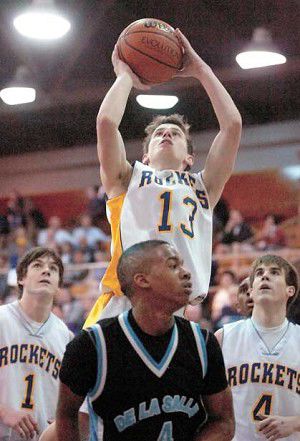 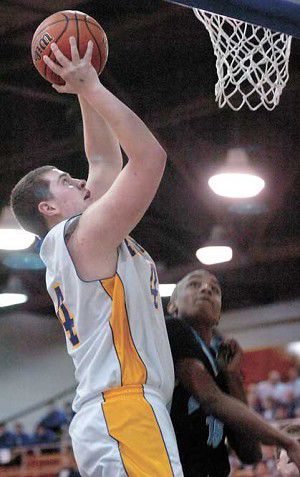 Pilot Rock's Shane Lazinka puts up a shot guarded by De La Salle's Isaiah Phillips in the Rockets' 75-55 loss to the Knights Wednesday in Pendleton.<BR><I>Staff photo by E.J. Harris</i>

Pilot Rock's Shane Lazinka puts up a shot guarded by De La Salle's Isaiah Phillips in the Rockets' 75-55 loss to the Knights Wednesday in Pendleton.<BR><I>Staff photo by E.J. Harris</i>

PENDLETON - A year ago the De La Salle North Catholic boys' basketball team was in the exact same position as the Pilot Rock Rockets.

Gaining entry to the OSAA 2A State basketball championships for the first time in any of their players' careers, the Knights were unprepared for what they would face in Pendleton, dropping their first contest.

But De La Salle has carried a different mentality this season and it showed for four quarters against the Rockets. DLS scored at least 16 points in every quarter, winning in its first-round game 74-55.

"The biggest difference is we have a different mind set," DLS senior Donta Harris said. "Last year we were just happy to be here. We wanted to win a championship but we were more glorifying in the fact that we actually got here. But now I'm a senior and we have the best team we've ever had so we're in it to win it."

Pilot Rock center Shane Lazinka put it flatly that the Knights were far removed from any team he or his teammates had seen this season. Running the floor with reckless abandon and forcing 16 first-half turnovers, the Knights raced out to a 21-point halftime lead.

"They run faster, jump higher and are overall more athletic than any team we've seen," said Lazinka, who scored 10 points and added seven rebounds. "We knew they were going to be good and we didn't come out strong. We didn't have a very good first quarter or second quarter."

Without taking a single shot from the perimeter, DLS still put up big numbers by scoring 26 points off turnovers and tallying 44 points in the paint.

Royshad Curry led the Knights with 21 points, scoring 11 of those in the first quarter, and more than anyone else gave the Pilot Rock defense fits trying to guard against his quickness and long reach.

"Last year I was just getting used to the varsity level and state was all new to me," Curry said. "I just let Donta go to work and sag off. But this year I realize that we have to help him out, especially with him injured, so we can win a championship."

Slowed by a visibly sore ankle, Harris was held to four points in the first half and committed eight turnovers. But in the second, he was the best counter to the surging Rockets, scoring 15 points.

His points late in the third quarter helped offset a Pilot Rock run that carved the lead from 21 to five. With Lazinka returning to the floor after missing the majority of the first half with foul trouble, the Rockets found their rhythm.

The constant throughout the game for the Rockets was Jeremiah GrosJacques, who scored nine in the first half and eight in the second for a team-high 17.

"He's been playing well especially deep the season," Pilot Rock coach Doug Baxter said. "I think that's good for him. He really stepped up and played big. He had some cramping problems in the second half but he really carried the energy for us in the second half."

Tanner Mitchell's three-pointer at the 4:52 mark brought the Rockets to within nine and two more buckets brought DLS's once-sturdy advantage to five.

"The guys decided to play basketball," Baxter. "We played a pretty good ball team that took us out of what we wanted to do in the first half. We made some adjustments at halftime and that was the difference."

As quickly as the Rockets were able to get back into the game, though, they were pushed back to a double-digit deficit. Extending all five players on offense, the Knights began to penetrate the key at will, finishing short-range jumpers and lay-ins.

"All of our guys are pretty good basketball players, but we just met a better basketball team today," Baxter said.

The Knights are looking to keep things going Friday against Portland Christian, a team they split with in the regular season.

"Since the end of last year we knew we'd be back here and playing for this title," Harris said. "We've been bonding in the second year of playing together and we're all working together."

Another storm system brewing for western US