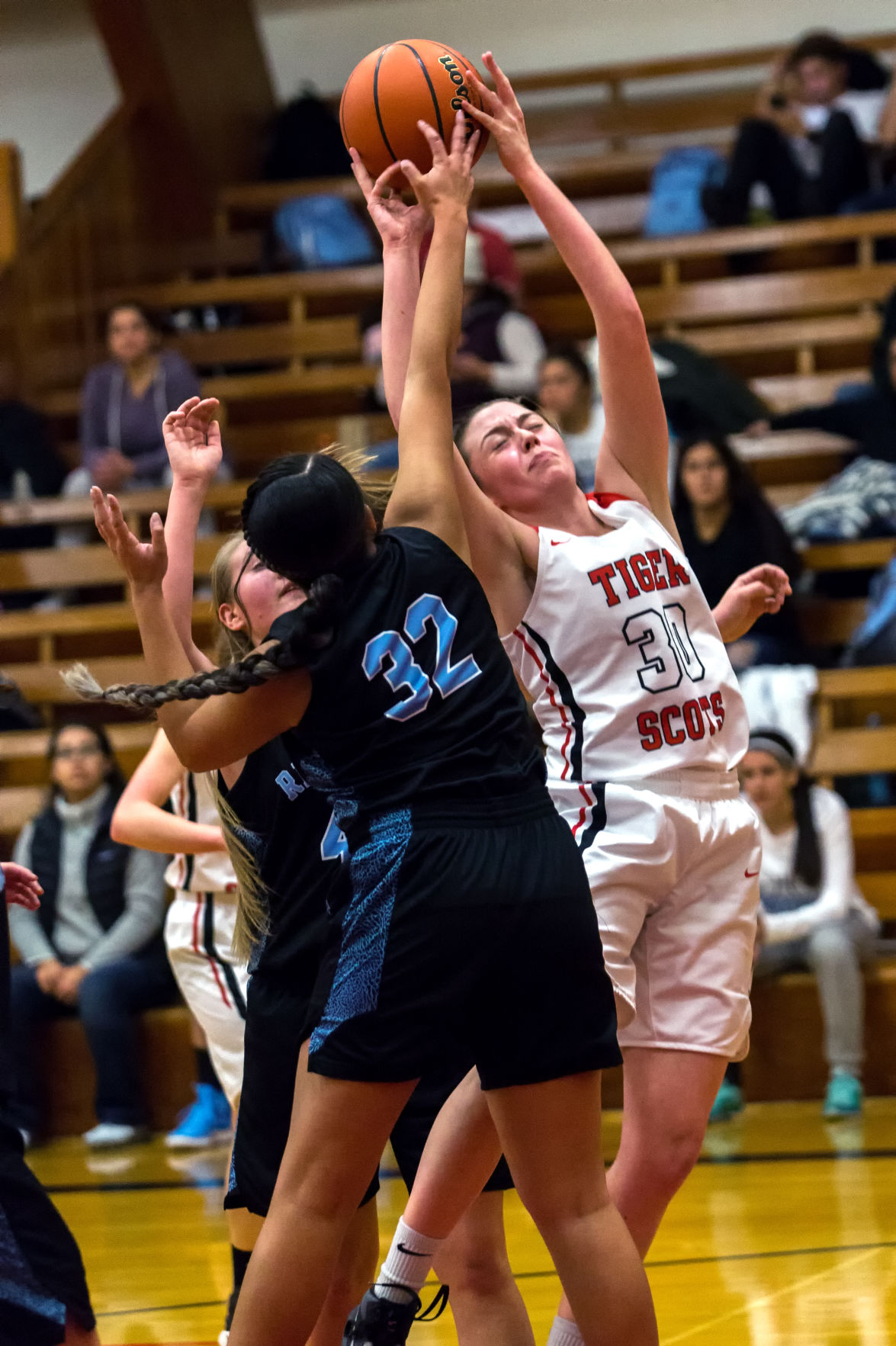 Cloe Davis (30), of Weston-McEwen, and Riverside’s Ceci Garcia battle for the ball during Thursday non-conference game. 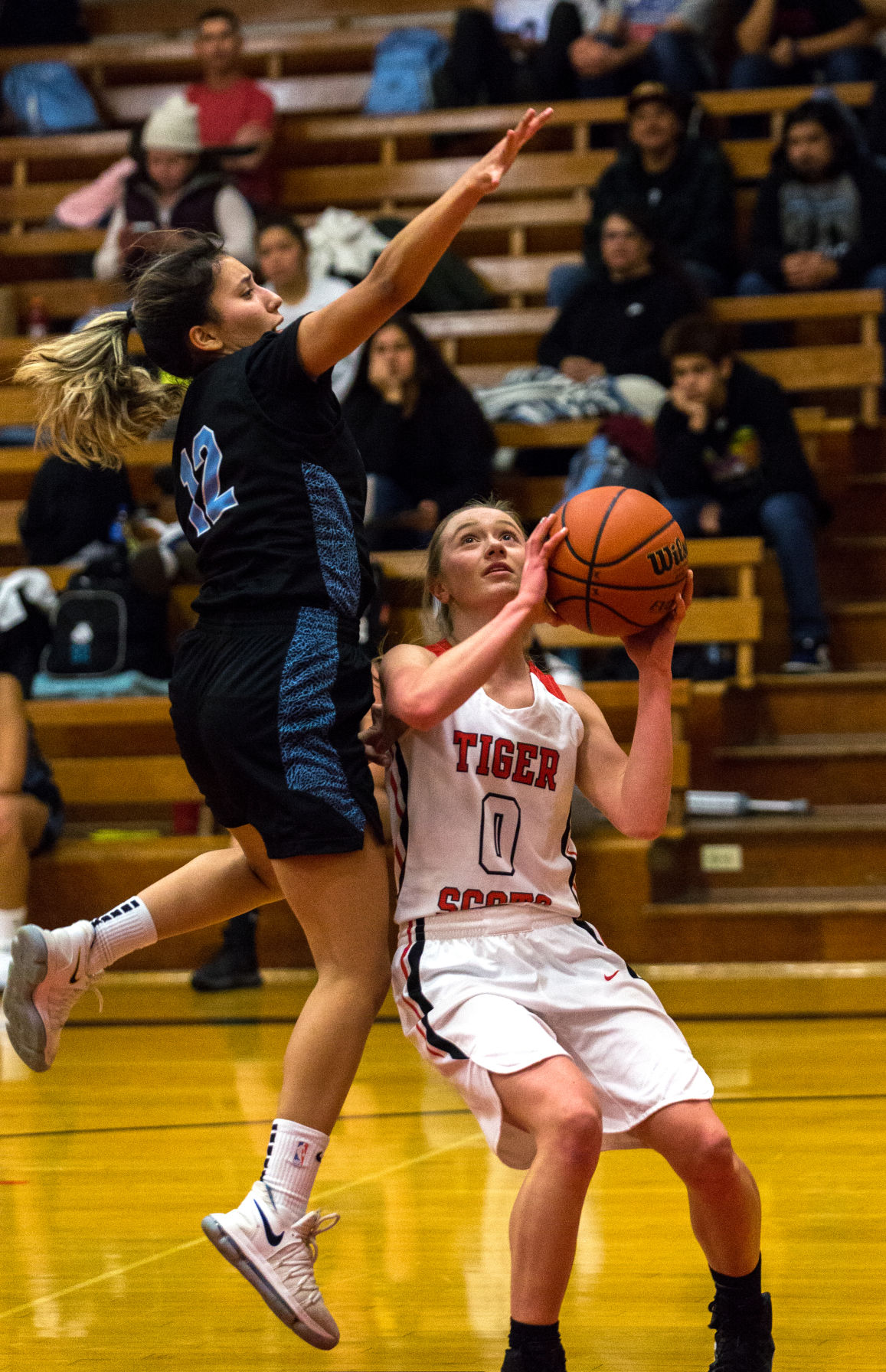 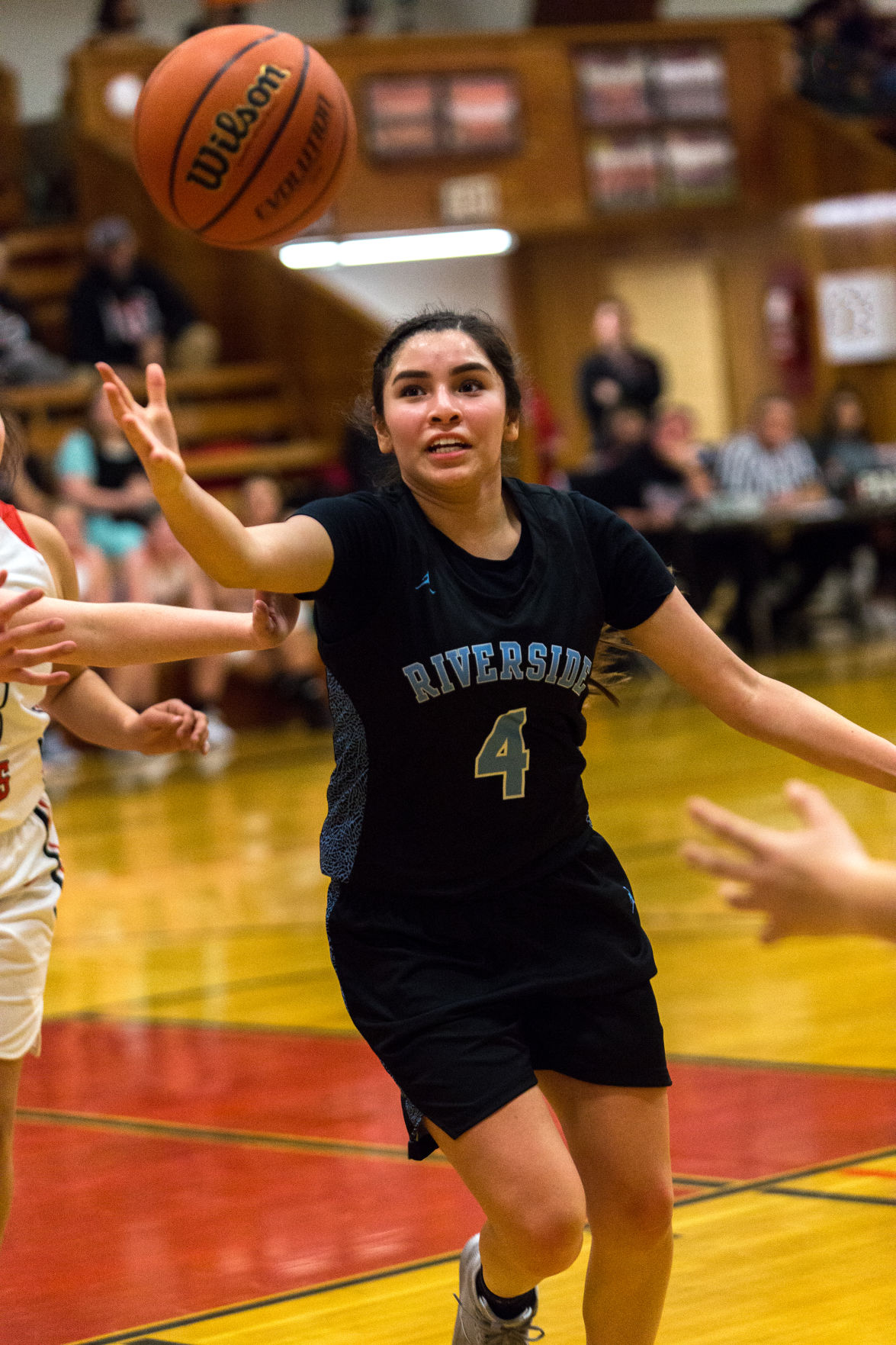 Riverside’s Jaylene Altamirano (4) chases down a loose ball during Thursday non-conference game against the Weston-McEwen TigerScots. 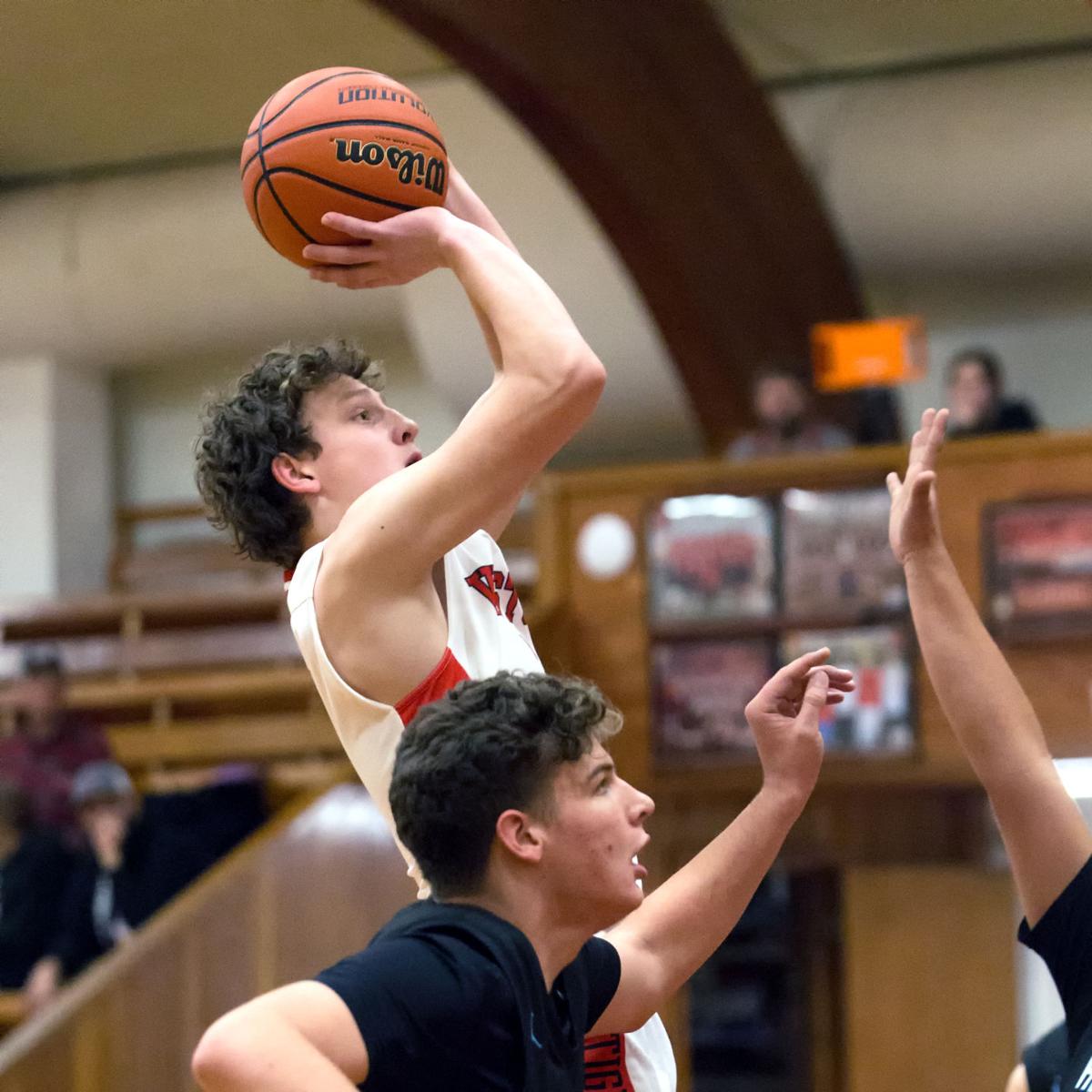 Blane Peal, of Weston-McEwen, goes up for a jump shot during Thursday’s game against the Riverside Pirates. 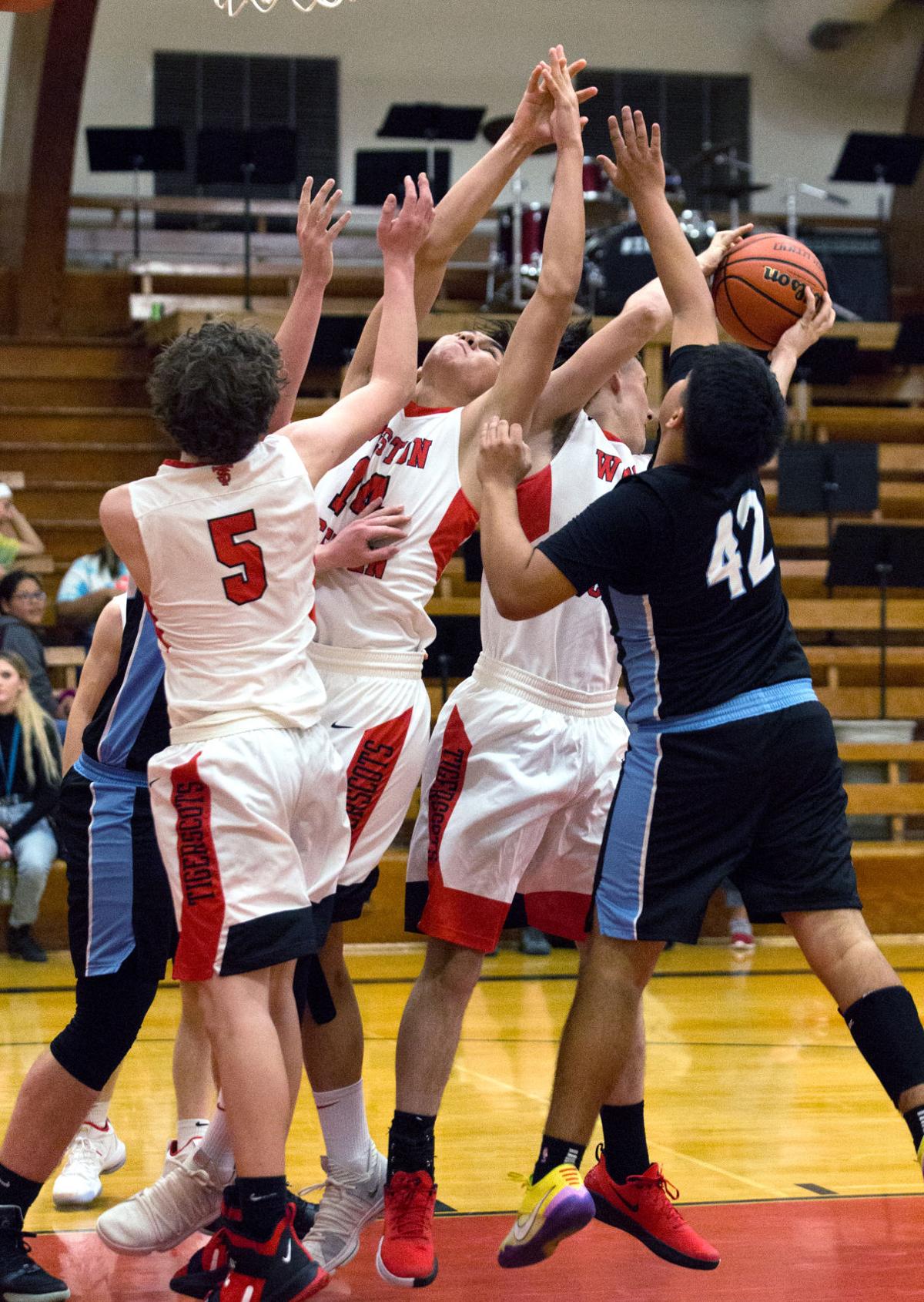 Francisco Barajas (42), of Riverside, fights for a rebound with three TigerScots during during Thursday’s game in Athena.

Cloe Davis (30), of Weston-McEwen, and Riverside’s Ceci Garcia battle for the ball during Thursday non-conference game.

Riverside’s Jaylene Altamirano (4) chases down a loose ball during Thursday non-conference game against the Weston-McEwen TigerScots.

Blane Peal, of Weston-McEwen, goes up for a jump shot during Thursday’s game against the Riverside Pirates.

Francisco Barajas (42), of Riverside, fights for a rebound with three TigerScots during during Thursday’s game in Athena.

ATHENA — The Pirates may have suffered a season-opening loss to Columbia-Burbank on Wednesday, but were quick to rebound against Weston-McEwen for their first win on Thursday.

The Riverside girls basketball paid the Weston-McEwen TigerScots a visit on Thursday evening, and took over at the end of the first quarter before tying the score twice and finally pulling away in the final eight minutes to take home a narrow 24-21 nonleague victory.

“We still aren’t shooting the ball well,” Riverside head coach Clair Costello said. “We’re very young. We have a lot of girls without much varsity experience. In the end, we made some bad decisions, but when you win a game, it’s always good.”

Weston-McEwen senior guard Ellie Scheibner, senior forward Trinity Hearn, and freshman forward Dalana Pickard combined for an early 6-0 lead for the TigerScots before the Pirates got to work.

At 3:06 in the first quarter, Pirates senior post Megan Hegar knocked down a shot to put her team on the board, and did the same just over two minutes later to bring the TigerScots within reach. Junior guard Cinthya Diaz’s basket at 0:20 helped Riverside clinch an 8-7 advantage to end the quarter.

Hearn and sophomore guard Charli King put together a six-point streak to open the following quarter that helped the TigerScots regain the lead, but Riverside senior guard Bianca Avalos put up five unanswered points in the final minute, including a 3-pointer, for a 13-13 tie at halftime.

“We started off strong,” said Avalos, who stands at 5-feet, 6-inches. “We came out intimidated at our first game. We only had two returning starters, and an injured senior. A lot of our girls felt pressure. Tonight, we handled that pressure very well. I’m hoping our team chemistry continues to improve throughout the season.”

Scheibner broke the tie 26 seconds into the second half, but Pirates senior post Cesi Garcia evened things out with a basket one minute later. Teammate Jaylene Altamirano, a 5-5 junior wing, broke the tie for the final time with 2:39 left in the quarter.

It would be the last of three baskets for the quarter.

“Everyone seemed stressed at every timeout,” Avalos said. “Our shots weren’t going in. I told them, ‘The shots won’t go in if you don’t take them.’ I told them to keep shooting. We started rotating the ball and using our teammates. Our communication really brought us back up.”

Riverside sophomore guard Yazeli Ayala put up two back-to-back shots in mid-quarter for a nine-point, 24-15 advantage. But Scheibner and Hearn chipped away at the deficit for a 25-19 game with 1:11 remaining. Weston-McEwen junior wing Bailey Munck scored with 24 seconds left, but the TigerScots could not overcome those final three points to take the game back.

“We took the ball inside,” Costello said. “Yazeli had some shots for us that really helped, and our defense was working really well. Hegar and Garcia did a good job in the middle. Nobody could shoot from the outside. It was a war zone down there.”

The Riverside boys came to life in the second half of their game at Weston-McEwen to take down the TigerScots 75-32 on Thursday night.

Although the Pirates (2-0) scored just 30 points in the first half, they came back hot with 30 points in the third quarter alone. Riverside head coach Clair Costello sent the bench in to finish off the game in the fourth quarter, in which junior guard Juan Reyna scored seven of his team’s 15 points to seal the win.

“We played really well in the second half,” Costello said. “We moved the ball really well and drove it to the basket.”

The Pirates will host White Salmon for another nonleague game on Saturday at 5:30 p.m. Weston-McEwen (0-1) hosts Central Linn at 5:30 p.m.