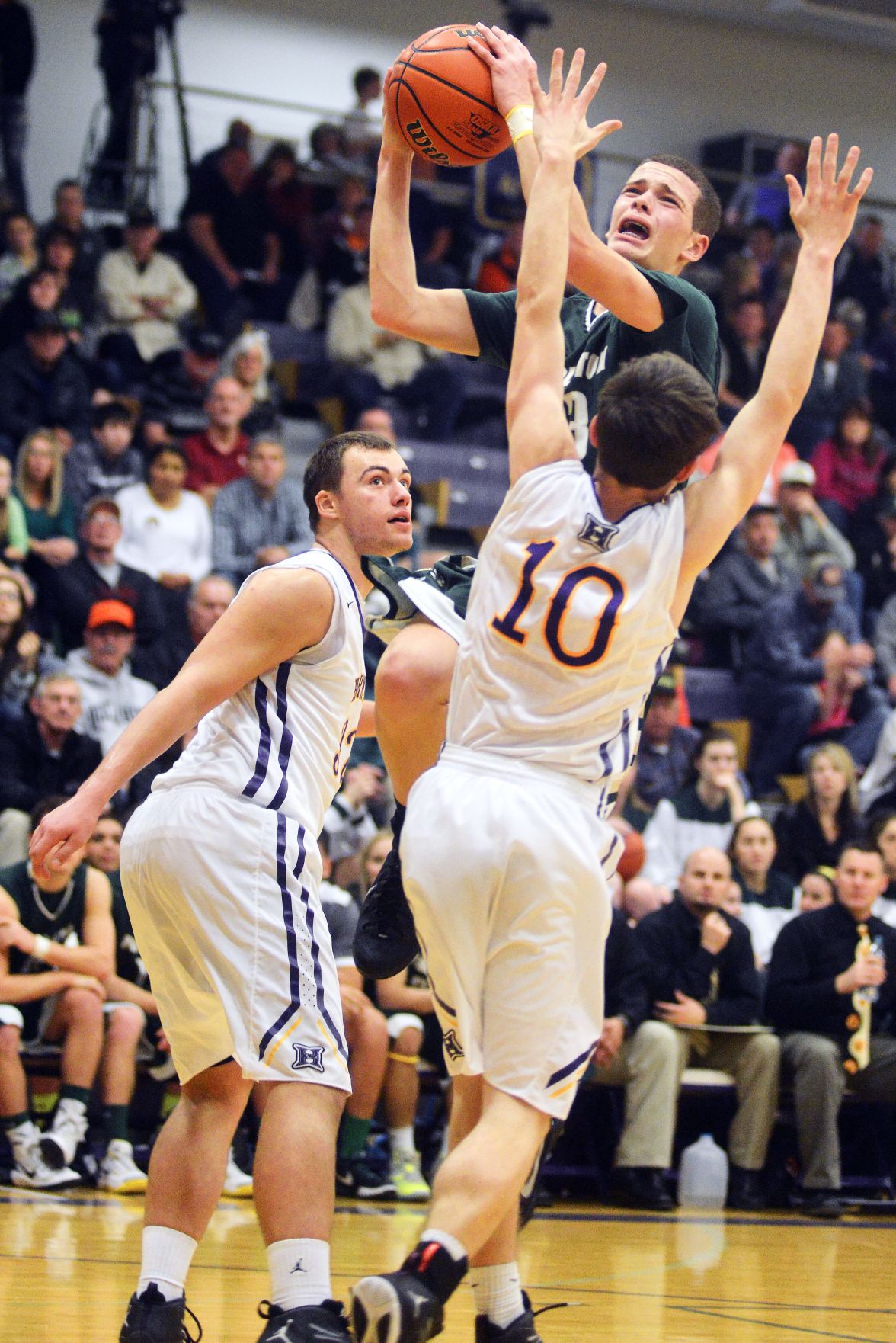 Staff photo by E.J. Harris Pendleton's Caden Smith shoots the ball guarded by Hermiston's Cole Smith and Austin Nailon (10) in the Bucks' 62-51 win against the Bulldogs on Friday in Hermiston. 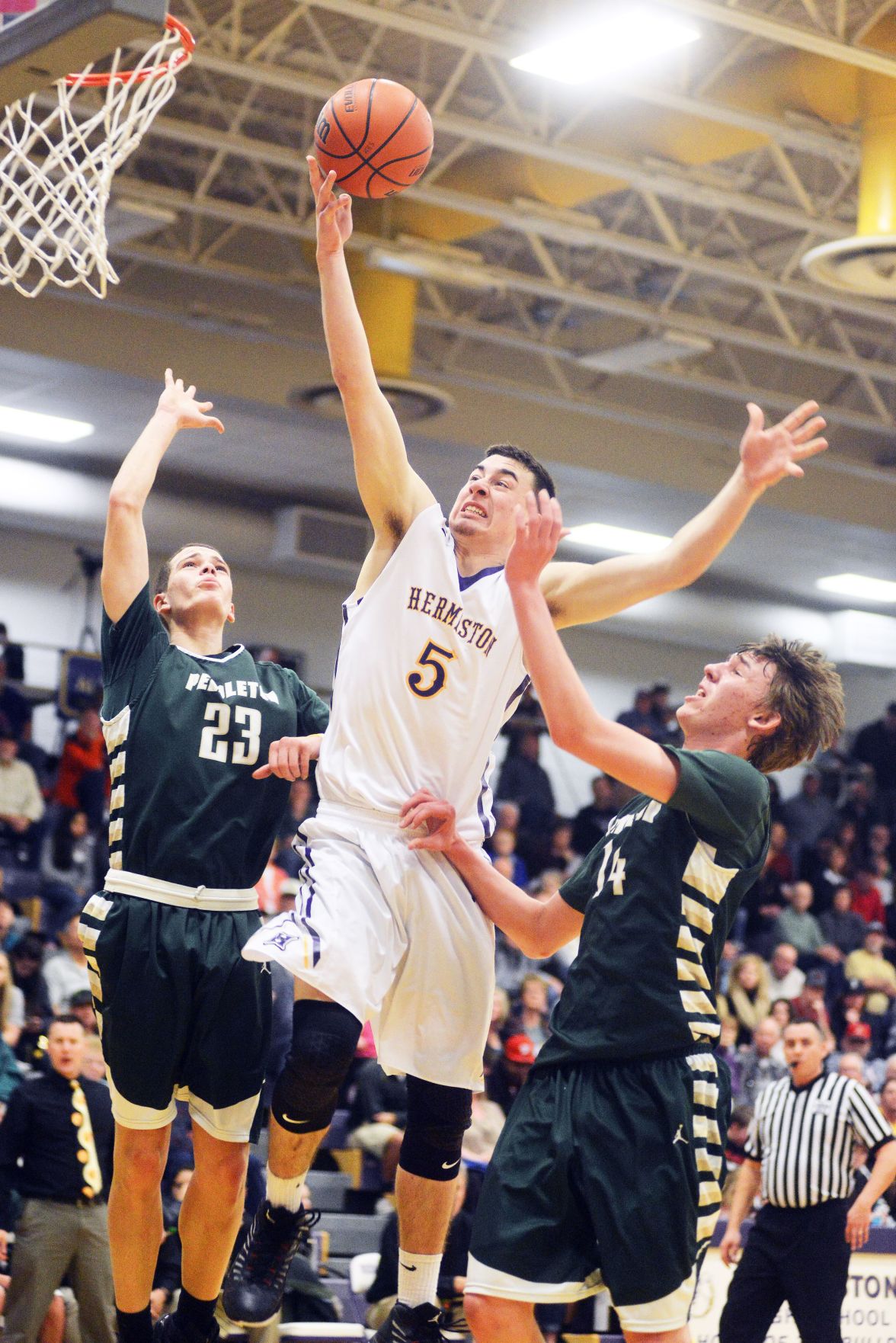 Staff photo by E.J. Harris Hermiston's Keegan Crafton drives to the rim splitting Pendleton defenders Caden Smith and Wes Persinger in the Bucks' 62-51 win against the Bulldogs on Friday in Hermiston. 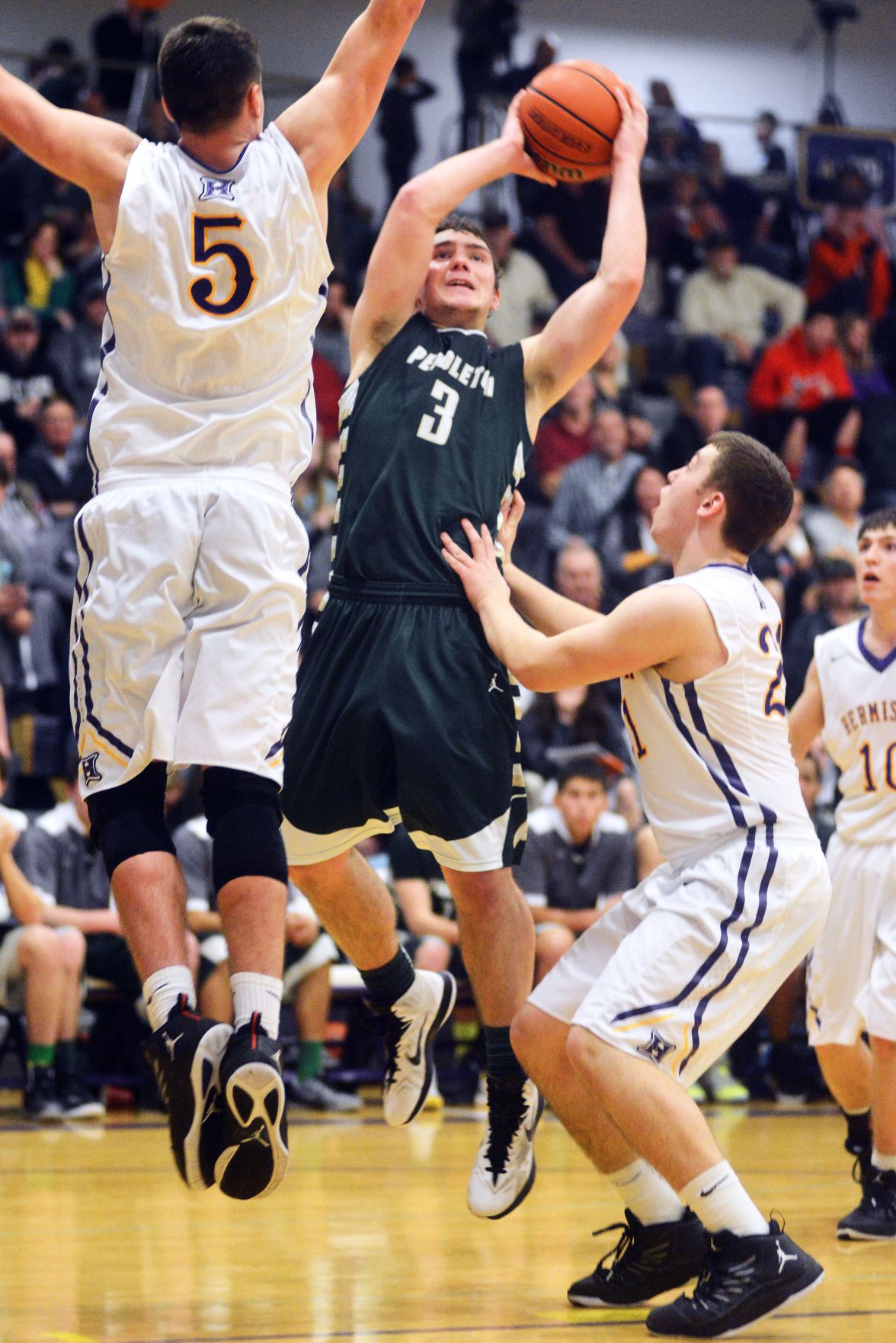 Staff photo by E.J. Harris Pendleton's Kia Quinn shoots the ball guarded by Hermiston's Keegan Crafton (5) and Chase Knutz in the Bucks' 62-51 win against the Bulldogs on Friday in Hermiston.

Staff photo by E.J. Harris Pendleton's Caden Smith shoots the ball guarded by Hermiston's Cole Smith and Austin Nailon (10) in the Bucks' 62-51 win against the Bulldogs on Friday in Hermiston.

Staff photo by E.J. Harris Hermiston's Keegan Crafton drives to the rim splitting Pendleton defenders Caden Smith and Wes Persinger in the Bucks' 62-51 win against the Bulldogs on Friday in Hermiston.

Staff photo by E.J. Harris Pendleton's Kia Quinn shoots the ball guarded by Hermiston's Keegan Crafton (5) and Chase Knutz in the Bucks' 62-51 win against the Bulldogs on Friday in Hermiston.

The last time the Hermiston Bulldogs played the Pendleton Buckaroos, it was a back-and-forth affair at Warberg Court the Bucks would eventually win.

Friday night in Hermiston, the game couldn’t have been more different.

The Bucks led for the final 27 minutes of the game behind Wes Persinger’s 19 points, seven rebounds and three blocks and they held off a late rally by Hermiston to win 62-51.

“It was very important (to get ahead and stay ahead),” Persinger said after the game. “We’ve been focusing on it for awhile. It’s just good to come out and beat ‘em by (11). This game was very important because now we automatically won the series with them.”

Kai Quinn added 15 points and six assists for the winners and Caden Smith chipped in with 14 points. Austin Naillon led the Bulldogs with 13 points, Chase Knutz had 11 and Keegan Crafton had 10.

But no one was bigger or better on the floor than Persinger.

“He was the hardest-working kid out there,” Hermiston head coach Jake McElligott said of the 6-foot-6 Pendleton center. “He was the difference-maker. He was the equalizer in the game. He worked his butt off, and I told him that after the game.”

Hermiston (6-14, 3-3 CRC) did tie the game at three after Austin Naillon hit a three-pointer to put them on the board. Pendleton (14-7, 4-2), however, would close the quarter on an 11-6 run to seize control early and extended the lead to 12 at halftime. Hermiston never came closer than 10 points in the second half.

McElligott called this week “toughness week” for the Bulldogs, and, by his account, it’s not going well.

Pendleton scored easy baskets all night long, on the other hand. Whether it was Persinger slashing and grabbing offensive rebounds or posting up, or Caden Smith getting the ball inside on drive-and-kicks, Pendleton easily scored while keeping Hermiston from get those kinds of looks.

At the other bench, Brian Broaddus has been working with Persinger to maximize his effectiveness on the floor.

Friday night, Persinger was everywhere. McElligott was impressed with the 6-foot-6 senior’s motor, and indeed, he was everywhere. He earned three and-one opportunities — only one of which he converted. But his second on Pendleton’s second third-quarter possession had a hand in opening up the lead for the Bucks.

“I feel like my teammates were just dishing me the ball,” Persinger said. “I didn’t really have to do much. They were creating more space for me and most of my shots were wide open. I had three and-ones, but besides those they were mostly just bunnies around the hoop that Kai and Caden and (Sonny Green) and Quinn (Cockburn) were all dishing to me right there on the block. They were making good things happen.”

The first quarter was a microcosm of the game, as Pendleton got a 3-pointer from Kai Quinn, an and-one from Persinger and all inside baskets, while Hermiston was turned the ball over four times and forced shots. Hermiston couldn’t get out of its own way, and Pendleton capitalized.

McElligott, though, singled out a couple guys who had good games. He pointed to Landon Gammell and Carson Lloyd, two reserves, who have gotten a bit more playing time as of late.

It wasn’t until the fourth quarter that Hermiston began to make a run at the Bucks.

“If they got under 10, I would’ve been worried,” the first-year coach said.

Hermiston couldn’t come any closer, however. After Bradt laid one in to push the lead back to 13, Naillon hit two free throws, which prompted a Pendleton timeout. Smith made one of two at the line, and Sonny Green made one as well, to get the lead back to 13. Zimmerly hit a step-back 3-ball with 36 seconds left to cut it to 10, but that was all Hermiston could muster.

“Right now we’re giving up a lot of easy baskets,” McElligott said. “We got to get together as a coaching staff and put our heads together and see what we can do.”

The Bulldogs get another shot at a Columbia River Conference opponent when they play The Dalles at 7 p.m. Tuesday on the road.