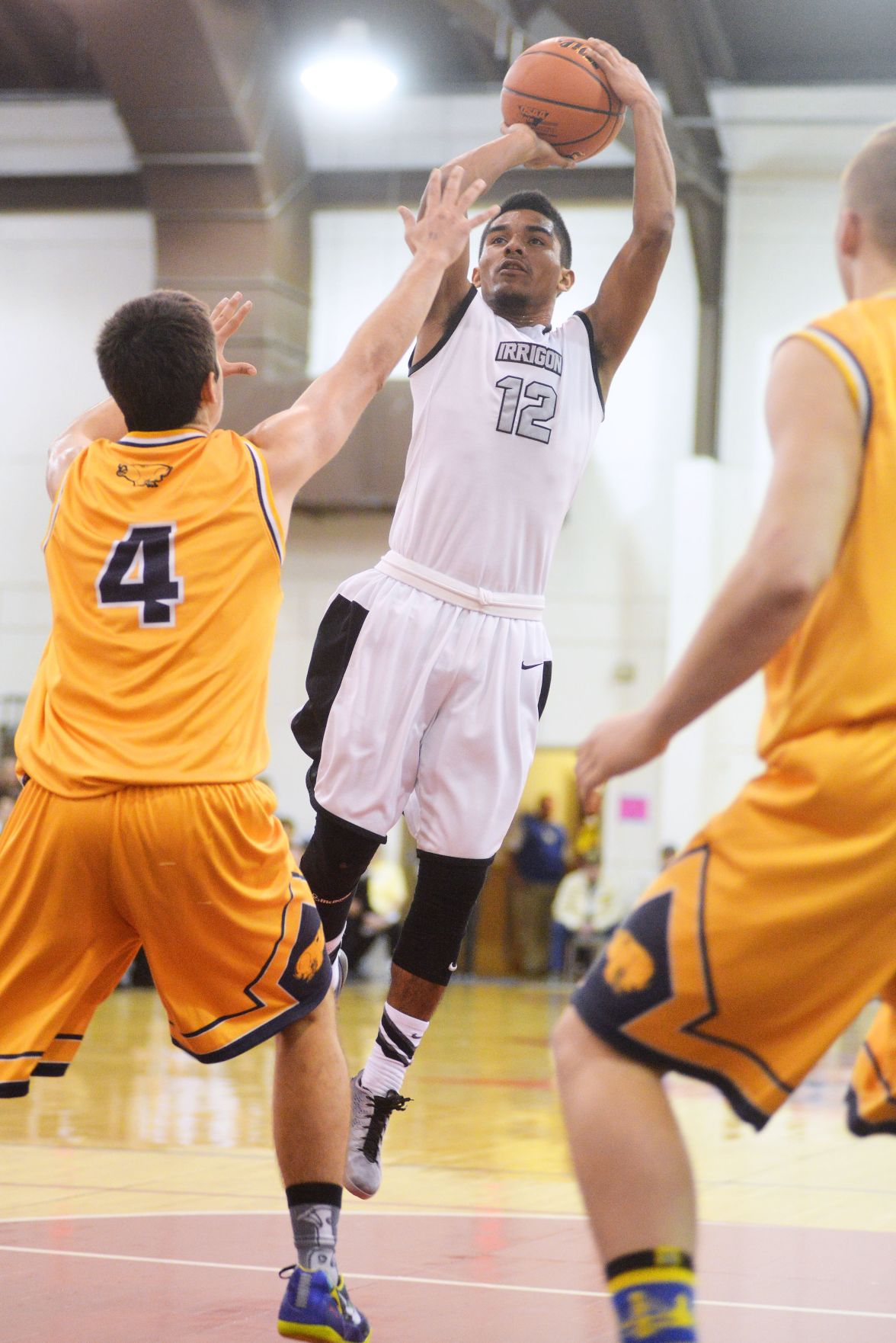 Staff photo by E.J. Harris Irrigon's Fredy Vera shoots the ball over Jackson Cross in the Knights' 65-53 win against the Boomers on Saturday in Pendleton. 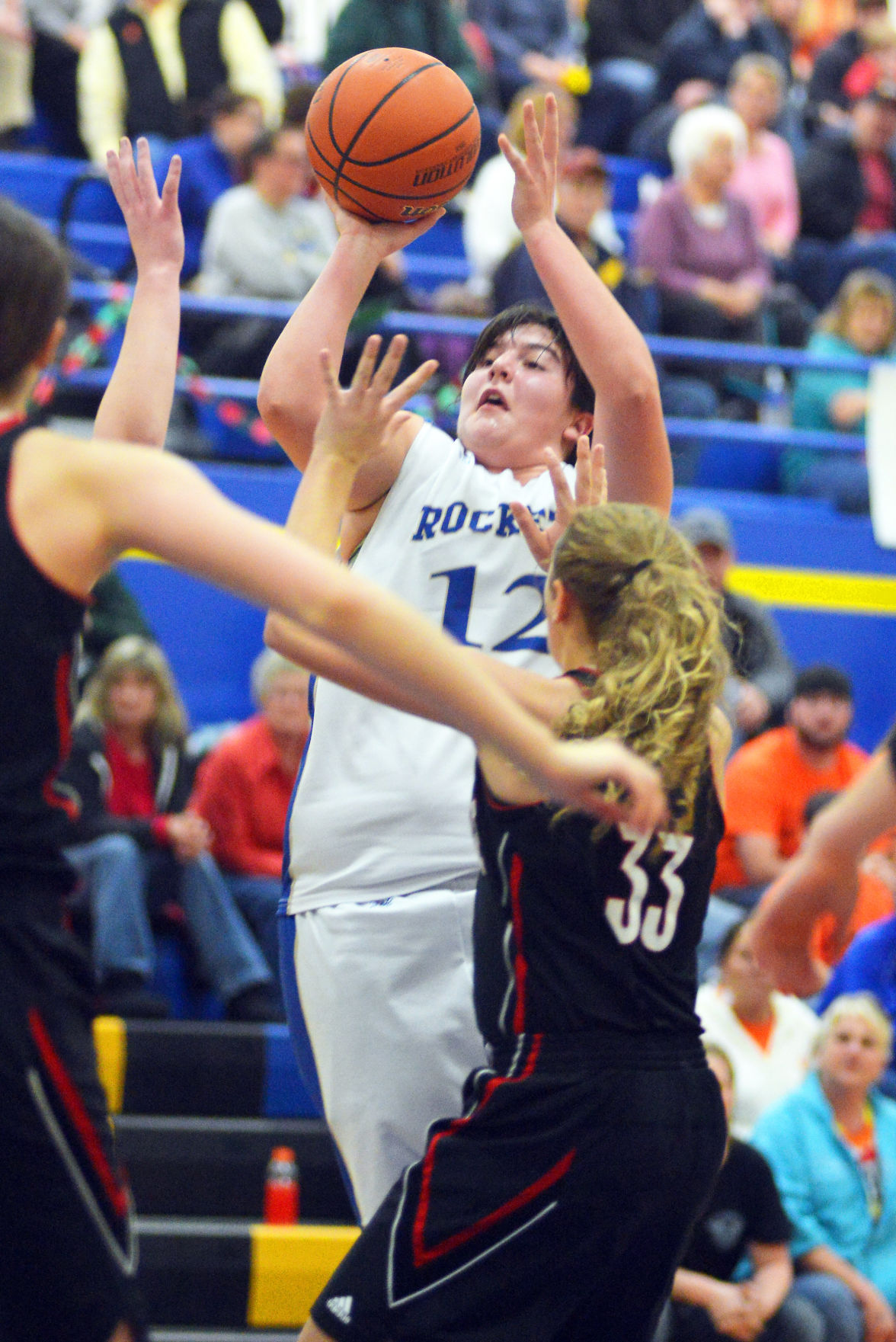 Staff photo by E.J. Harris Pilot Rock's Madison Dave shoots the ball guarded by Enterprise's Reagan Bedard in the Rockets' ??-?? win against/loss to the Outlaws on Friday in Pilot Rock.

Staff photo by E.J. Harris Irrigon's Fredy Vera shoots the ball over Jackson Cross in the Knights' 65-53 win against the Boomers on Saturday in Pendleton.

Staff photo by E.J. Harris Pilot Rock's Madison Dave shoots the ball guarded by Enterprise's Reagan Bedard in the Rockets' ??-?? win against/loss to the Outlaws on Friday in Pilot Rock.

Friday marks the open of league play for the area’s 2A basketball squads and every team will be in action when the Columbia Basin Conference tips off for the first time in 2016.

Just like last year there will be just two state playoff spots available to the six-team league, so any squad hoping to extend its season will need to first qualify for the district tournament and then reach the championship round.

For the boys, a power triad has already emerged from preseason play as Heppner and Stanfield aim to knock off reigning champion Irrigon.

For the girls, Pilot Rock appears ready to take on all comers and the pecking order behind them is anything but set at this point.

Each team gets 10 games to make its case for the postseason. Here’s what to watch for as the CBC begins play:

Irrigon (8-3), OSAA rank No. 5: The Knights enter the league season with a few more chinks in their armor than recent years, but are still the team to beat until proven otherwise.

Irrigon will be coming into league play with a chip on its shoulder as well after dropping its last two preseason games — 83-74 to 1A No. 2 Nixyaawii and 48-46 to 3A No. 1 Dayton.

It’s the first time the Knights have suffered back-to-back losses in the Mitch Thompson era, however, their 37-33 win over Amity at the Columbia River Clash remains the only blemish for the No. 2 ranked 3A team.

Senior guard Fredy Vera was the only starter to return to the squad but he hasn’t had to do it all for the Knights this season thanks to the maturation of junior guards Austin Rice and Xavier Rambo and junior post Hayden White.

Irrigon is 25-1 in its last two league campaigns and averages 54.5 points for and 42.9 against this season.

Heppner (10-1), No. 7: The Mustangs are poised to make a run at the CBC championship if they can stay healthy this season after returning the most talent in the league. That experience was paying off early in the preseason when Heppner started on a five-game winning streak despite just getting in four practices between its state title in football and its first game on the hardwood.

Heppner’s only loss is to 2A No. 1 Imbler, a 47-45 nail-biter in Imbler that knocked the Mustangs from their cloud and helped refocus the team for the five-game winning streak it rides into league play.

Forward Patrick Collins gives Heppner the best big man in the CBC — he averages a double-double — but the team has already proven it’s not dependent on his scoring as guards C.J. Kindle and Logan Grieb and forward Weston Putman have all scored 20 points or more in a game at least once this season.

The Mustangs are averaging 55.6 points for and 44 against this season.

Stanfield (7-1), No. 16: If not for a two-point loss to No. 6 Union, the Tigers would be undefeated headed into league play.

Junior guard Dylan Grogan (6-foot-3) is a match-up nightmare at the 2A level and is a key reason first-year coach Victor Baros has rolled out an all-guard starting five to great success.

But the Tigers are far from reliant on Grogan, and Ryan Bailey, Tony Flores, Thyler Monkus and Brody Woods have all scored 15 points or more in a game at least once this season.

Those wins are a good indicator the Tigers will be one of the toughest squads in the CBC this season, but there’s still a little bit of an unknown element because Stanfield has only played three teams that are classified 2A or above (or the Washington equivalent).

Stanfield heads into its league opener on a four-game win streak and averages 60.3 points for and 47.9 against.

Weston-McEwen (3-5), No. 33: The jury is still out on how good the TigerScots can be this season due to some inconsistent performances.

Senior center Alex Finifrock (6-foot-7) has shown the ability to take over a game, but

Weston-McEwen seems to thrive when it gets balanced scoring to arrive at its 47.9 points a game average.

That’s been a key number this season as Weston-McEwen has only lost once when putting up at least 48 points.

To compete for a playoff spot in the CBC, however, the TigerScots will have to find a way to give up fewer points and their 54.9 points allowed average ranks dead last in the conference. Even without factoring in a 87-57 loss to Kiona-Benton (WA), the TigerScots are giving up points at an unmatched rate.

Weston-McEwen enters league play on a three-game skid and also is 0-3 on the road. It lost out on the chance to test itself against a pair of 2A’s best teams in December when games at Imbler and Burns were canceled due to weather.

Pilot Rock (6-8), No. 29: The Rockets suffered a five-game losing streak in December but will enter league play having won five of their last eight and have shown enough during the preseason that their CBC opponents would be wise not to overlook this young squad.

Like most of the teams in the CBC, the Rockets are driven by an excellent backcourt that can keep them in any game when their shots are falling. However, shutting down sophomore guards Bryson Pierce and Chris Weinke has been an easy key to victory for opponents this season so the Rockets will need more from their supporting cast to have a shot at a state playoff berth.

Pilot Rock is averaging 42.4 points for and 43.9 points against this season.

Culver (4-7), No. 35: The Bulldogs have already eclipsed last season’s win total (2) but have been wildly inconsistent under first-year head coach Johnny Wilson.

Sophomore guard Weston Basl and junior center Mike Davis have been their go-to scorers so far this season but the team has suffered from a reliance on the outside shot due to an overall lack of height.

With an average height of 5-foot-9, Davis is their tallest player listed at just 6-2.

That deficiency hurt them badly in a 65-18 loss to South Wasco on Tuesday that sends Culver into league play on a three-game losing streak.

Culver averages 40.7 points for and 48.5 points against this season.

Pilot Rock (9-5), No. 6: The Rockets took a few lumps during a very tough preseason but should be well-prepared for anything they’ll see in league play because of it.

All of their losses came to squads that project as state playoff qualifiers at their classifications, and the Rockets have followed each of those up with a win. They enter CBC action having won five of their last six.

Senior Madison Dave has been taking over in the lead-up to league play and is averaging 16.6 points in the Rockets’ last five games, but the team has been able to pull out wins even when the all-state performer is limited thanks to the continued maturation of talented sophomores Kayla Deist and Bekah Roe.

If the Rockets can get more consistent production from their supporting cast they could run away with a second-straight CBC title and wash away the bitter taste left by last season’s early playoff exit.

Pilot Rock averages 45 points for and 37.9 against.

Weston-McEwen (3-6), No. 26: The TigerScots had more holes to fill in their starting lineup than any other CBC team this season and have fared better than their record indicates during a challenging preseason.

Sophomore guard Chelsea Quaempts is poised for a breakout season and could be one of the league’s top scorers while all-state senior Ammarae Broncheau has continued her high level of guard play as well.

Junior Bailey Hillmick adds another scoring guard to the mix, but the TigerScots’ season could hinge on the play of its posts, which started hot but have been struggling to make an impact on the score sheet of late.

The most notable win of the preseason for the TigerScots was 44-27 over 1A No. 9 Helix, but that was their last win as well and they enter league play on a three-game losing streak.

Weston-McEwen averages 42 points for and 41.7 against.

Heppner (2-9), No. 30: The lone bright spot in a long preseason full of losses has been the emergence of freshman guard Jacee Currin.

Her 14 points a game average is by far the best on the team as Mustangs No. 2 scorers — a group that has primarily included senior Jessica Kempken, sophomore Morgan Correa and freshman Madison Combe — are putting up just around seven points a night.

That’s a number that has to come up if the Mustangs have any hope of competing in an improved CBC field.

Heppner comes into league play on a six-game losing streak and is averaging a CBC-low 27.8 points for and a CBC-high 42.2 against.

Stanfield (4-3), No. 19: The Tigers are a tough team to figure out based on their preseason performances.

Their wins have come over teams that are a combined 13-19 with not a winning record among them, while their losses have been to teams combining for a 27-11 mark.

What can be gleaned from their non-league games, however, is that Stanfield is definitely a better team than they were this time last year.

Junior guard Natalia Esquivel has been their most consistent producer on offense, but several Tigers have taken turns leading the team on the score sheet this season.

The team has fallen off of late, however, and after putting up 180 points in its first three games scored just 119 in its next four.

Culver (7-4), No. 28: Like the Tigers, the Bulldogs are a team hoping to make the leap from perennial doormat to contender this season.

Also like the Tigers, Culver may have to settle for more incremental success based on preseason results.

The Bulldogs have fared well against lower competition but still struggle to beat teams with winning records.

They’re definitely no pushover, though, and the senior-led group is averaging a CBC-best 30.8 points against average while scoring 39.9 per game.

Irrigon (3-7), No. 27: The Knights have suffered a pair of three-game losing streaks during the preseason but have been competitive and are coming off a one-point defeat at the hands of Nixyaawii in their last tune-up.

However, their wins come against teams that are a combined 9-21.

Irrigon has one of the best players in the conference in sophomore guard Jada Burns, but has struggled to find a consistent No. 2 scorer and has been forced to rely on a basket or two from several players to fill out the score sheet.

Those results haven’t been stellar as Irrigon averages just 35.4 points a night while allowing 39.9.