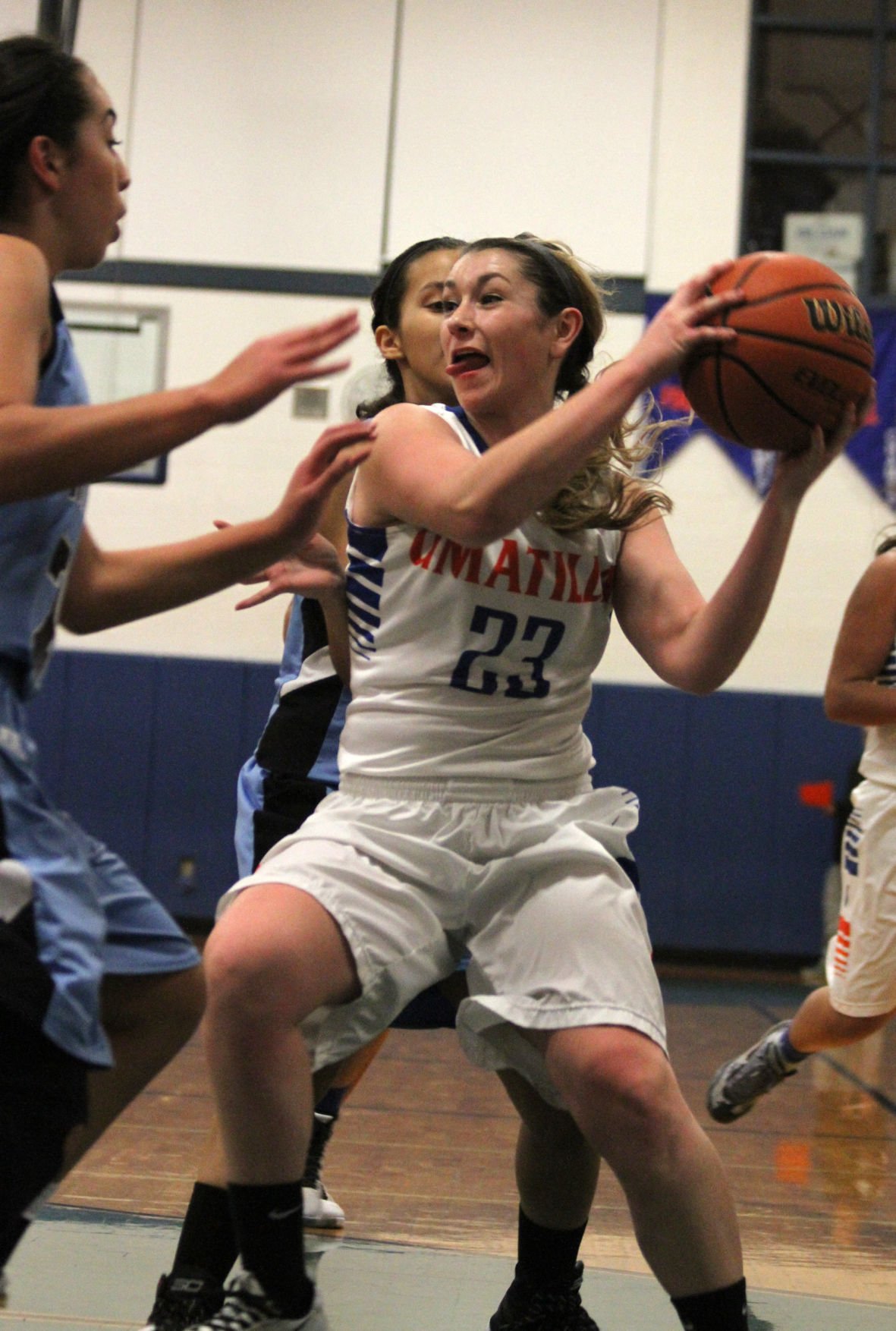 Staff photo by Sam Barbee Umatilla's Sidney Webb (23) tries to move into the lane against Riverside's Alondra Caldera (left) and Brenda Avalos during the Vikings' 49-20 win Thursday in Umatilla. 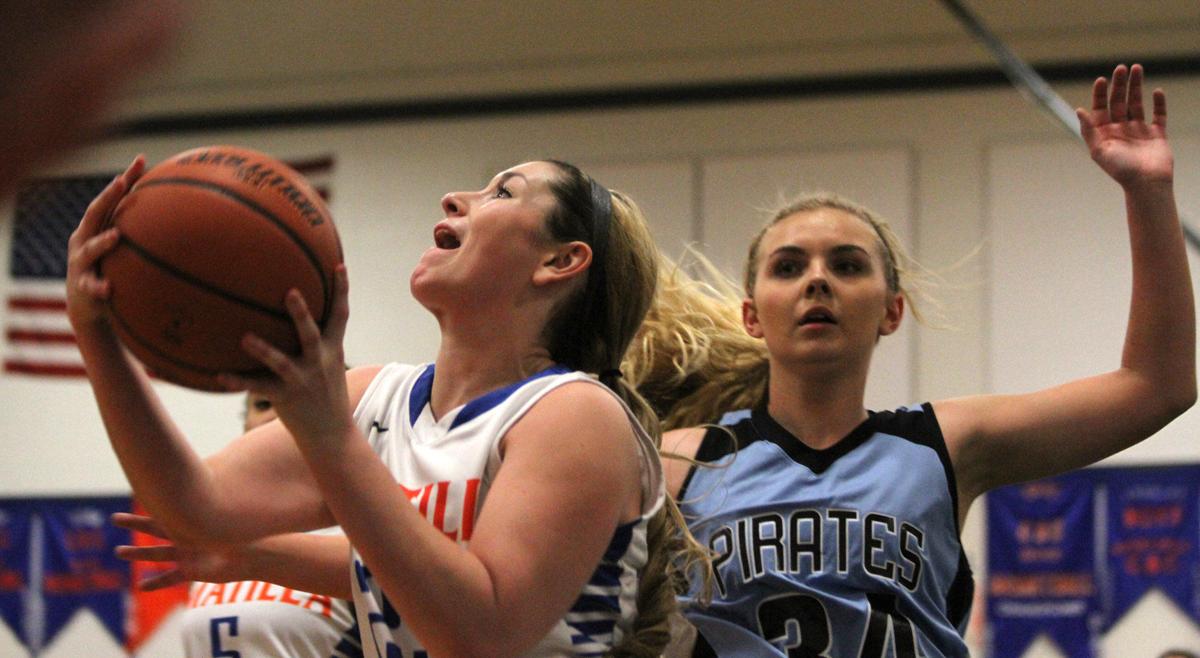 Staff photo by Sam Barbee Sidney Webb of Umatilla (23) goes up for a layup in front of Riverside's Skylar Wightman during the Vikings' 49-20 win Thursday night in Umatilla. 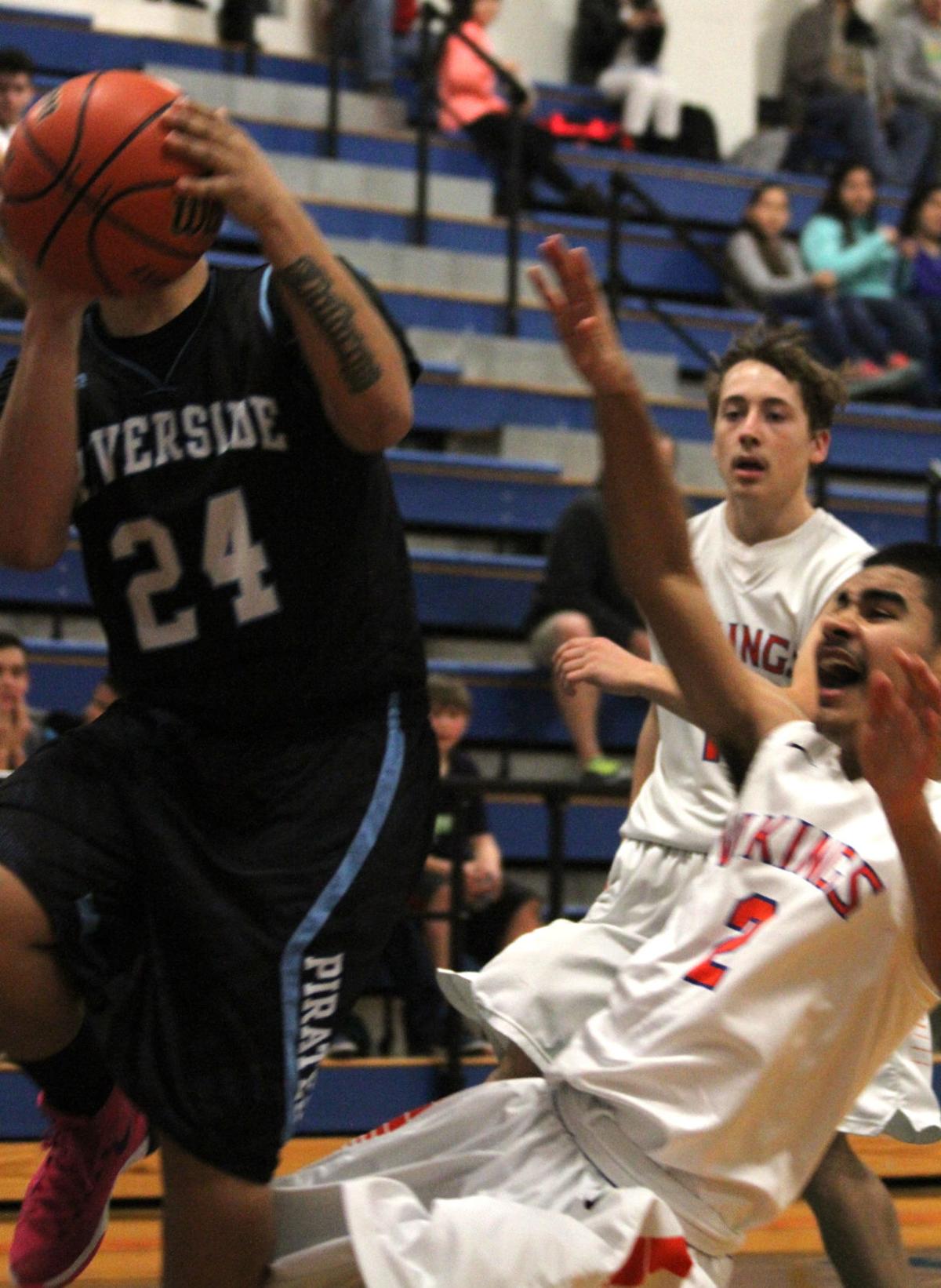 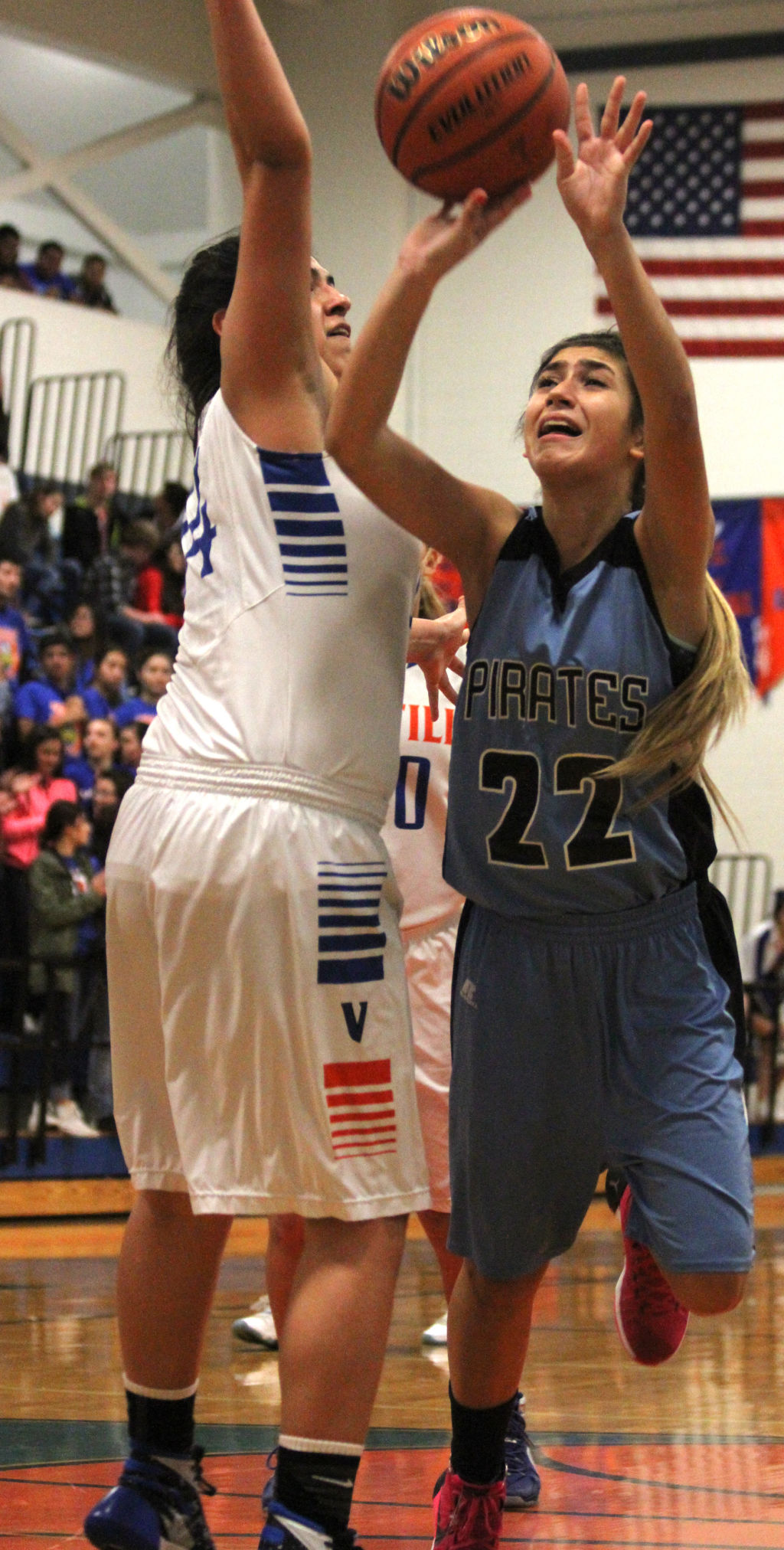 Staff photo by Sam Barbee Umatilla's Sidney Webb (23) tries to move into the lane against Riverside's Alondra Caldera (left) and Brenda Avalos during the Vikings' 49-20 win Thursday in Umatilla.

Staff photo by Sam Barbee Sidney Webb of Umatilla (23) goes up for a layup in front of Riverside's Skylar Wightman during the Vikings' 49-20 win Thursday night in Umatilla.

The Umatilla junior forward took the year off to focus on other things, and now — halfway through her junior season — things are beginning to click. She led Umatilla in scoring Thursday night with 14 points, grabbed 10 rebounds and swiped four steals off the bench in the Vikings’ runaway 49-20 victory at The Pit.

“I think she loves coming off the bench more than she likes starting, to tell you the truth,” Umatilla (14-4, 4-0) coach Scott Bow said.

Coffey started the season in the starting lineup, but quickly moved to the bench when she struggled early on. Bow said it took some time for her to re-adjust to the speed of varsity basketball.

“It all comes with teammates. I couldn’t do it without them,” she said. “We’ve all come a long way and what I do comes from within them, too.”

But with Thursday’s performance — when she recorded a career-high in points, breaking her previous high of 13 points set last week against Vale — she says she once again is comfortable on the hardwood.

“I don’t have that thought in my head of, ‘Oh, I didn’t play last year,’” she said. “Now I’m just comfortable and I’ve gotten back in it. Again, it’s just like with my teammates. It’s that time of the season. We all just got together and everything’s just cool.”

Bow says that having her in the right spots to be able to succeed has also helped her improvement.

“I think I did a little better job putting her in better situations,” Bow said. “This is usually that point of the year that coaches see their teams starting to excel. Those kids that really start figuring it out and start peaking, and (Coffey’s) one of those kids right now.”

But Coffey wasn’t the only Viking to play well Thursday night. Umatilla’s defense was absolutely smothering, forcing 31 Pirate turnovers and grabbing 10 steals as a team. Riverside (3-13, 0-4) didn’t score until the 2:59 mark of the second quarter when Abby Hernandez got a layup to go to make the score 20-2.

“We just wanted to play our game and play us and go crazy and pretty much just be at that next level,” Coffey said.

After jumping to a 12-0 lead after the first quarter — and forcing 11 turnovers along the way — Umatilla did nothing but extend the lead. The Vikings scored on their first three possessions of the second quarter and led 20-0 when Sidney Webb scored with 6:16 on the clock. Umatilla took a 26-4 lead into the locker room at halftime while holding the Pirates to just 14 percent shooting (2-14) while shooting just 38 percent (12-31) itself. Usually a good 3-point-shooting team, Umatilla made just 1-9 Thursday night.

Coming off its best game of the year, the Umatilla Vikings came out flat against the Riverside Pirates, and were blown out 49-32 at home on Thursday.

Riverside’s three-quarter court press gave the Vikings problems all night, forcing Umatilla into 18 turnovers. Kaden Webb of Umatilla led all scorers with 14 points, with nine coming in the second half and seven of those coming at the free throw stripe. Noe Madrigal, Eon Castillo and Felipe Olivera each had 11 points to pace the Pirates.

“We take every league win as a big deal because we haven’t had too many in the last couple years with being so young and inexperienced,” Riverside coach Clair Costello said. “So any time you jump on somebody at home and play fairly well — that was the most excited I’ve seen them in the locker room in a long, long time.”

The first quarter slogged by with only 11 points and Riverside leading 6-5. Both teams combined to shoot just 24.5 percent from the floor that quarter. Castillo’s two-pointer with 21 seconds left in the period gave Riverside a 6-5 lead, a lead it would relent just once more.

It happened on the first possession of the second qaurter, when Jesus Ramirez scored to put the Vikings up 7-6. But it was the last time the home team would lead.

Riverside embarked on an 8-1 run to take a 14-8 lead, and Umatilla whittled it back to two at 14-12 on a Webb floater. But Riverside scored five of the next seven points to take a four-point 19-15 lead into the half.

From there, it was all Pirates. Up 24-20 in the third quarer, Riverside used a 9-3 run to take a 12-point lead into the fourth quarter, and it kept on growing. It quickly ballooned to 17 when Madrigal hit a 3-pointer with about five minutes left to push the count to 44-27, and the Pirates led by 20 after Castillo hit a couple free throws.

Umatilla tried to crawl back into it with 3-pointers, but they all went begging. Overall, Umatilla shot just 1-16 from deep. Riverside went 4-9 from 3-point range.

“We showed up flat, couldn’t take care of the ball — Riverside beat us in every aspect of the game,” Umatilla coach Derek Lete said.