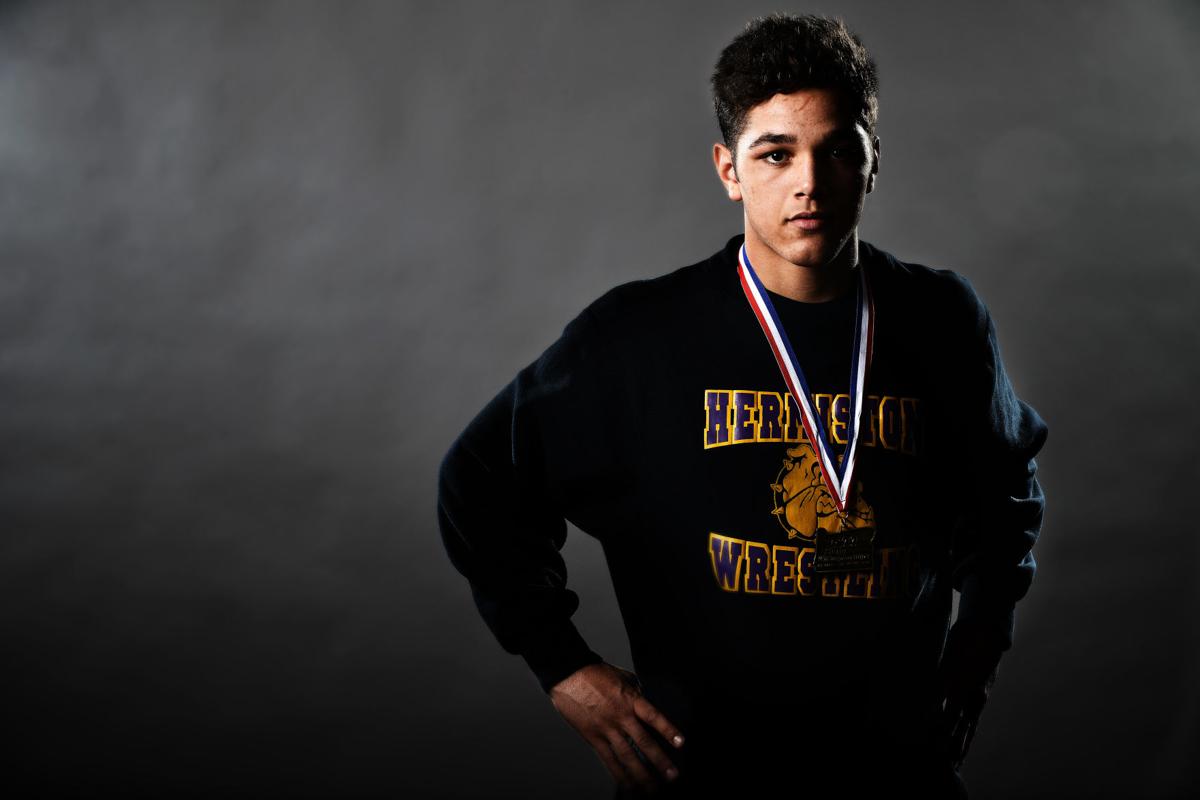 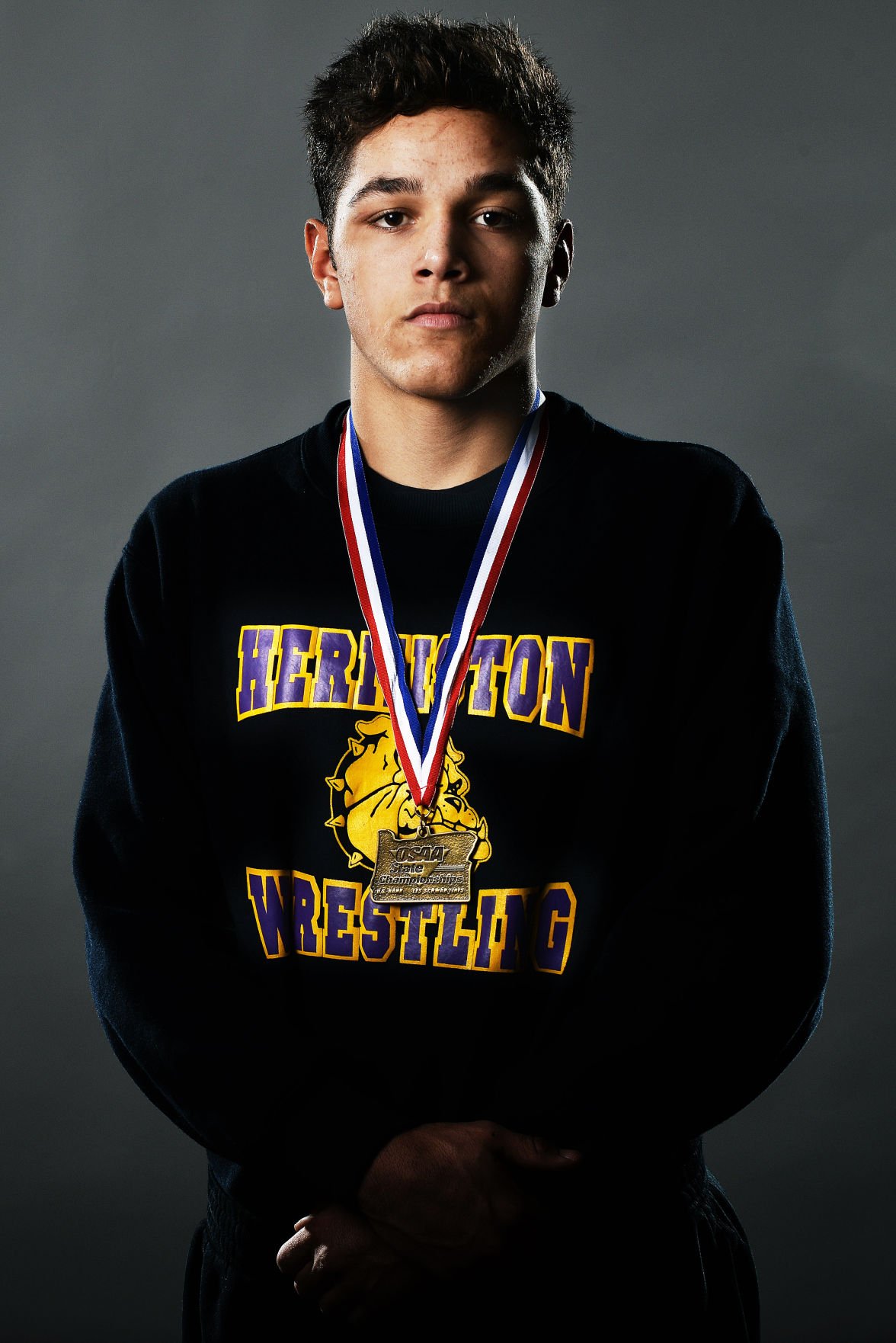 HERMISTON — At 5:30 a.m. on school days, many Hermiston High students are still fast asleep in their beds, enjoying the final minutes of rest before the dreaded alarm clock sounds to start their day.

Meanwhile, at that same time the Hermiston wrestling team is already awake and at school, getting in their grueling morning workout. Whether it’s running sprints, laps around the gymnasium or even a fun game of basketball as a change-of-pace, the Bulldogs meet up to get their bodies going and their day started right.

Now having a morning run on top of a typical strenuous two hour practice after school may seem excessive for a bunch of teenagers, but the Bulldogs embrace it. Sure they would like to grab a few extra hours of sleep before the school day or even on days when school is out, but when there is a winning tradition to uphold the difference between skipping the workout or not could be costly.

“Of course you’re tempted (to sleep), but while you’re asleep someone else is already up and getting better,” Hermiston junior, and state qualifier at 182 pounds, Joe Gutierrez said after practice on Monday. “So it’s just kind of that drive that leads you.”

“You have to have that drive to be better and that want to improve,” added Corey Mason, a senior and qualifier at 220 pounds. “And just know if you don’t come to practice it’s a match you might lose or a state title you didn’t win.”

It is habits such as those plus hundreds upon hundreds of hours in the weight room, in practice and in offseason training that have pushed the Hermiston Bulldogs to wrestling dominance in the state of Oregon over the past two decades. Since 2000, no school has won more wrestling team state championships than Hermiston’s 10 and only Burns at the 3A level has matched that total. Hermiston has won four championships in a row and eight of the last nine at the Class 5A level with the exception of 2012, all while undergoing three different coaching changes.

“Once you kind of build a reputation in your city and people start to hear about it you want to keep the talk up and prove yourself going back every year,” said Valen Wyse, a senior and qualifier at 170 pounds. “So once we got a name for ourself, I think the coaching staff has done a good job of pushing us to keep up that tradition.”

Hermiston will be gunning for its 11th state championship starting this Friday at the Veterans Memorial Coliseum in Portland, though the road won’t be easy. Just seven of the 16 state qualifiers from the 2016 team returned this season, and Hermiston qualified 14 total wrestlers this year — third most in 5A behind Crater (21) and Sandy (16). Those numbers mean that Hermiston already has its hands full before the tournament even starts, and will need exceptional performances from all 14 wrestlers in the championship bracket and in the consolation rounds to earn those precious bonus points to boost their march towards the title.

“Some guys are going to have to wrestle over their head at the state tournament,” Wyse said, “but that’s what we’re here for.”

Hermiston head coach Kyle Larson said that he’s not necessarily worried about the numbers game, as much as he’s focused on making sure his guys wrestle hard and wrestle well.

Leading the charge for the Bulldogs will be seniors Valen Wyse and C.J. Hendon, who are the lone two returning state placers from 2016. Wyse, the defending 152-pound state champion, moved up to 170 pounds this season and comes into the tournament off a second consecutive district title which helped him earn the No. 1 seed in the state bracket. Meanwhile, Hendon earned a third place finish last season and comes into the state tournament with the No. 1 seed at 138 pounds.

Other returners with state experience include Adrian Tuia (No. 2 seed at 145), Julio Leiva (No. 7 at 170), Joey Gutierrez (No. 3 at 182), Kenny Bevan (No. 5 at 220) and Beau Blake (No. 5 at 285). All five wrestlers come in following top-2 finishes at districts and are determined to turn in a much better performance at state this time around and Wyse said that the key to victory starts with those five.

“When we had to pull it together as a team we did it at the Oregon Classic Tournament last month,” Wyse said. “So if we can get that mojo going again at the state tournament and put it together, beat up on people wrestle like bullies, it’s definitely going to pay off for us.”

Hermiston will finish up their week of practice with a light workout on Thursday afternoon before packing up and making the trek to Portland. Larson said that after a real hard week of workouts last week, this week has been more focused on fine-tuning techniques and making sure the guys stay fresh enough to wrestle at their best come Friday.

“We talked (Monday) about just getting on mat and wrestling guy in front of you,” Larson said. “It doesn’t matter if he’s a Crater guy or a kid from Bend or wherever, you step on mat and wrestle as hard as you can and give all effort you have and the outcome will be there at the end of the six minutes or the end of the tournament with the team points.

“I really feel the guys are fired up and excited to get there so I think we’re going to roll in there and guys will compete and give best effort for sure.”