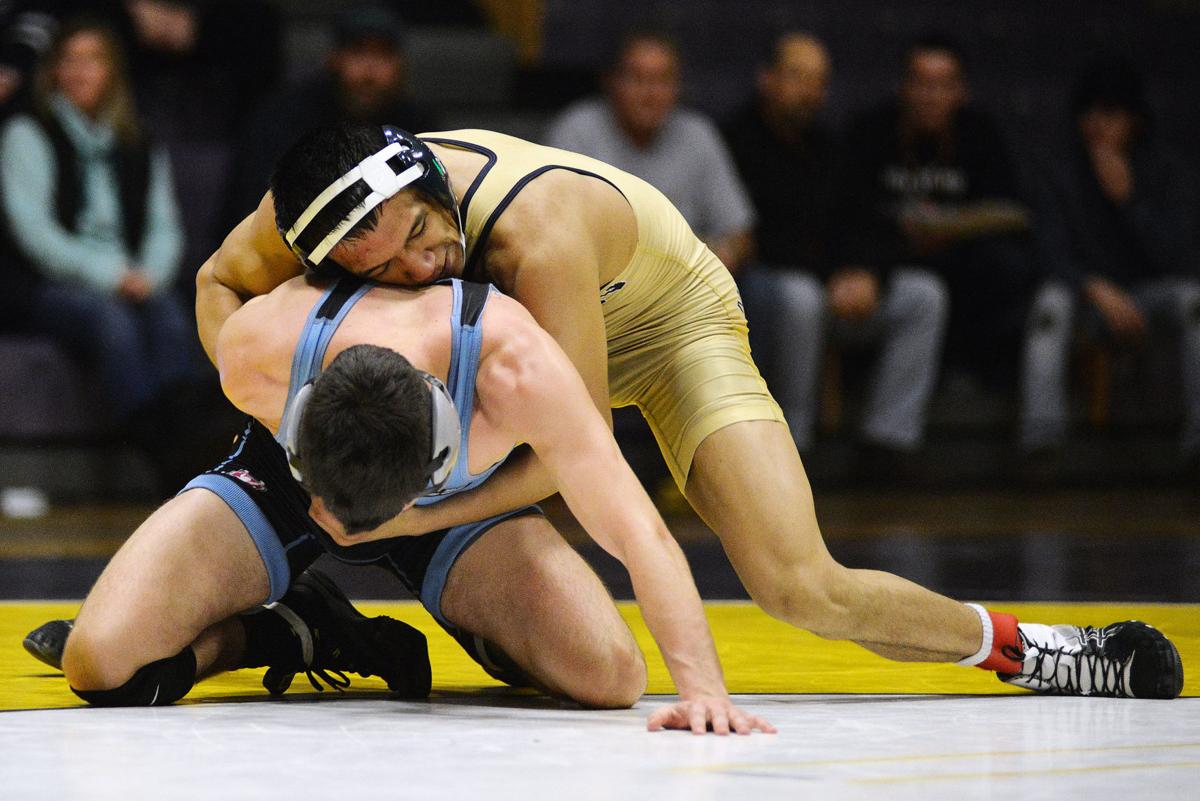 Staff photo by E.J. HarrisEOU's Mhar Caballa's takes down Warner Pacific's Josh Johnson to win in overtime of the 125-pound match on Friday in Hermiston. 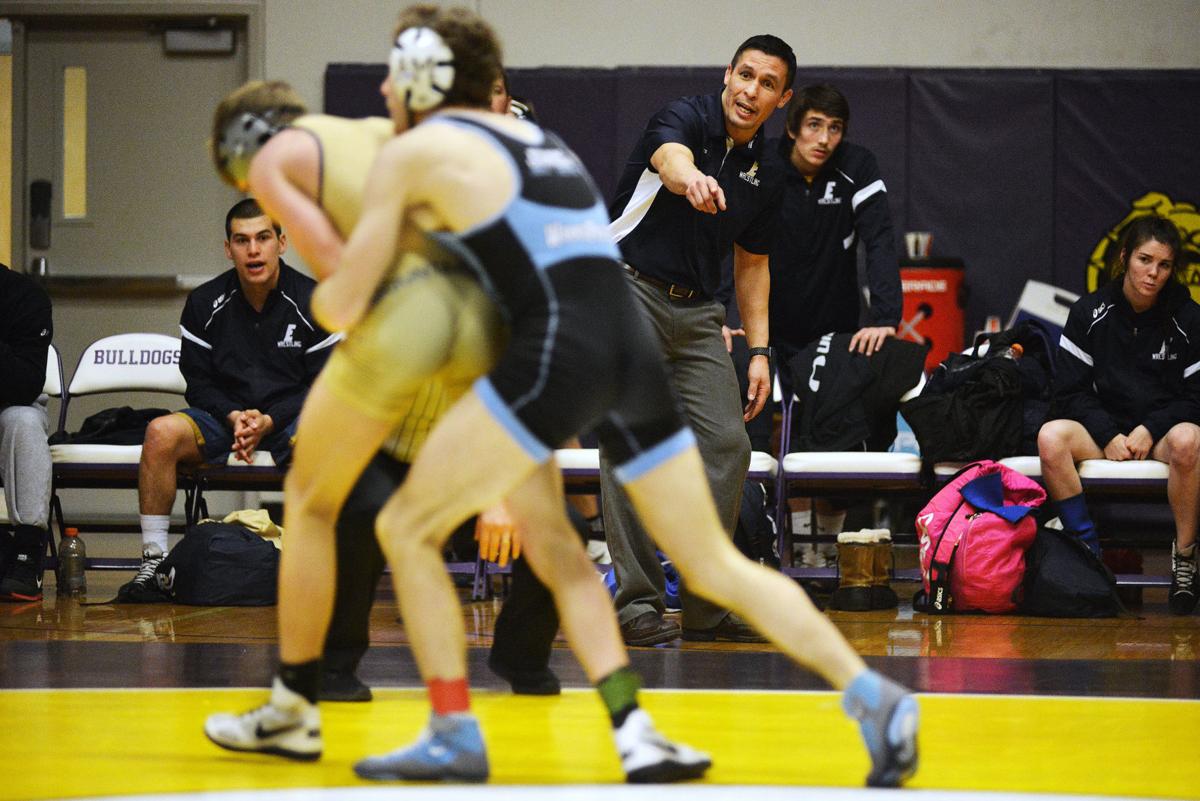 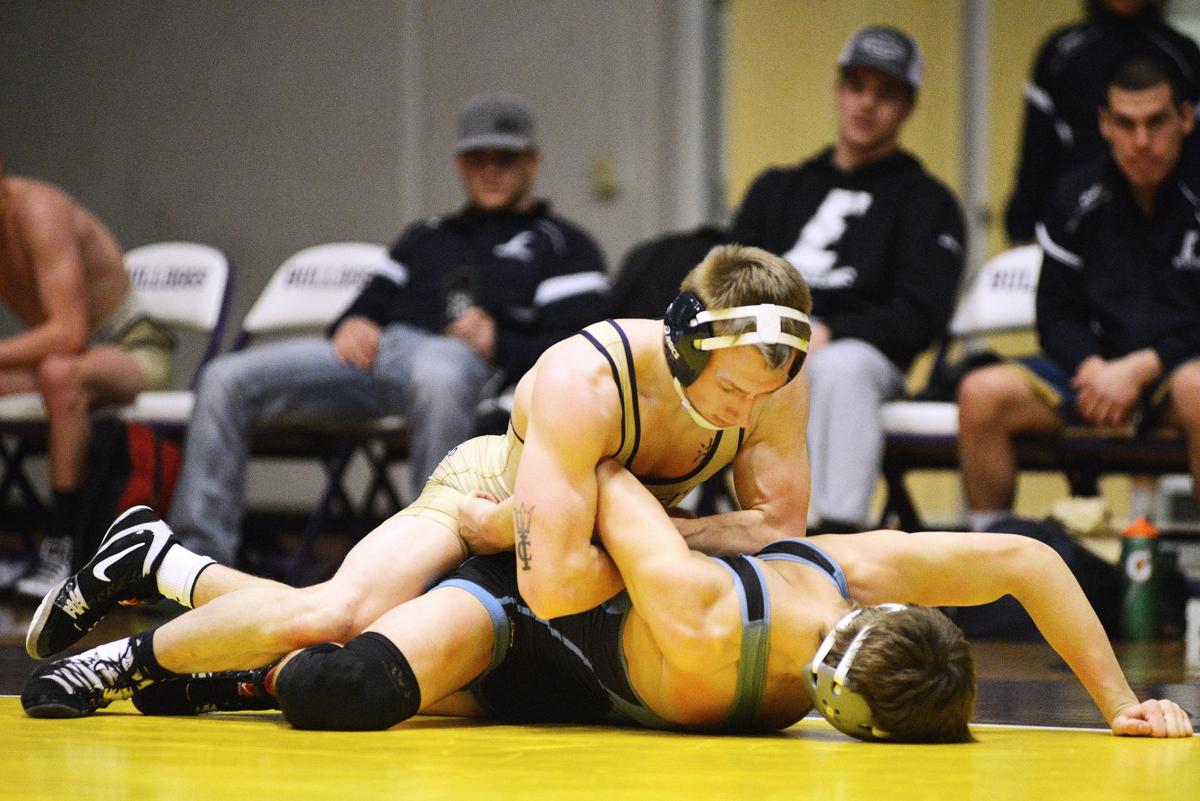 Staff photo by E.J. HarrisEOU's Tyler Miller locks up the arm of Warner Pacific's Calvin Call before pinning him in the 141-pound match Friday in Hermiston.

Staff photo by E.J. HarrisEOU's Mhar Caballa's takes down Warner Pacific's Josh Johnson to win in overtime of the 125-pound match on Friday in Hermiston.

Staff photo by E.J. HarrisEOU's Tyler Miller locks up the arm of Warner Pacific's Calvin Call before pinning him in the 141-pound match Friday in Hermiston.

HERMISTON — Looking to build up a following for its recently revived wrestling program, Eastern Oregon University surrendered one of its few home duals on the schedule to take on Warner Pacific at Hermiston High on Friday night.

The crowd may have been modest, but those in attendance will certainly be spreading the good word after the Mountaineers polished off Warner Pacific 33-9 for their third dual win of the season.

“We’re coming along,” said EOU coach Dustyn Azure, “we’ve been right on the edge of cutting over the top of the hill there and hopefully tonight is what gets us over the top and we keep building off this.

“We wanted to come out (to Hermiston) and showcase our team, and let them know what we’re about. We want to get out there and find local talent, and hopefully they want to come over and wrestle with and help with this tradition and just get it going and developing.”

The night also featured six women’s matches, though they did not count toward the team score, with EOU and Warner splitting them.

The dual began with the match of the night as No. 13 125-pounder Mhar Caballa of EOU scored an 8-7 sudden victory over No. 12 Josh Johnson. Caballa scored the final point 15 seconds into the extra period when he evaded Johnson’s aggressive shot and slipped around behind him for a takedown.

“I’m pretty stoked, because this is one of the duals we’ve actually won (as a team),” Caballa said. “I mean, things are falling into place and we’re peaking at the right time.”

Caballa, a sophomore from Kodiak, Alaska, found himself trailing Johnson 6-4 after the second period, and used an escape 30 seconds into the third to make it 6-5. Almost immediately he was back on the offensive with a shot, but like he had repeatedly done already, Johnson was able to block and forced a stalemate by reaching over Caballa’s back and latching on around his waist.

A restart with 1:03 left got the action back to the center of the mat, and Johnson looked to finish off Caballa with a shot at the :42 mark, but was stopped in his tracks and forced to retreat. Caballa took the opportunity to mount a counterattack and with 31 seconds left found his way past Johnson’s defenses to land a shot for a takedown and a 7-6 lead.

“At first I couldn’t finish my shots. I got to a lot of shots, I just couldn’t finish,” Caballa said. “I heard (my coach) from the corner and he was telling me to stick to double legs and get two hands on the legs and all that, and it helped out a lot.”

He couldn’t make it hold, though, and Johnson escaped to tie the score with 10 seconds left.

Caballa said he felt like he had an advantage going into the one-minute overtime.

“I felt like I had good conditioning, I just had to believe in my conditioning,” he said. “My coach trains us pretty well and we practice overtime all the time. (I wanted to) just keep pushing the pace, pretty much.”

Azure said he wouldn’t be surprised to see that match play out again later this season.

“That’s going to be another match to look forward to, we’re both in the same region so I’m sure they’ll meet up again,” he said. “The region at 125 (pounds) is just tough all the way around so it’s just going to be a fun weight to watch.”

Warner Pacific’s Josh Crager got the Knights on the scoreboard in the 133-pound match with a 7-5 win, but Eastern won each of the next three to take a 19-3 lead. The 157-pound match ended with an injury default after Warner’s Timmy Riviera experienced painful cramping in his calf before the match even started. Riviera tried to tough it out on one leg, but lasted just 30 seconds before he had to throw in the towel.

That brought up the women’s freestyle portion of the evening.

EOU junior Brandon Davidson made sure the men picked up right where they left off with a 12-1 win over Jesse Johnson at 165 that made it 23-3 and secured the win with just three more matches and a forfeit coming at the heavyweight division for Warner Pacific. Davidson was up 3-0 after one period, and 7-0 after two.

Warner’s Miguel Simon won 5-2 at 174, then Joe Dickinson held on to beat Eastern’s Pancho Saldana 6-3 at 184 for their only other win.

Saldana, a senior from Milton-Freewater, finished each period in a position of leverage, but Dickinson was saved by the buzzer each time.

“I’ve just got to get around the corner a little faster and finish on my takedowns, that was the difference on that match,” Saldana said.

For Saldana, who is also an NAIA All-American javelin thrower for the Mountaineers, the chance to be a part of wrestling’s return to EOU was something he didn’t want to miss out on.

“Once Coach came to visit and I knew he had the head job, I went up to him and asked if I could join the wrestling team,” he said. “It’s a great opportunity and I’m glad he gave me the opportunity to join the team.”

Azure said he was happy to have an athlete of Saldana’s caliber already on campus.

“I knew he was a hard worker coming in. I was able to watch the end of the track season, his throwing, so I watched him get in the weight room all the time. He was busting his butt in there,” Azure said. “I figured it was going to carry over when he hit the mat and it has. He gets out there and he does whatever you tell him to do and he’s an easy one to coach. He’s been off the mat for so long, I wish we could have had him a couple more years.”

Saldana said it’s been a rewarding experience, even if he wasn’t able to pull out the win in front of some old friends and family that had come to watch him wrestle.

“We’re getting to the top of the hill now,” he said. “We’ve been having some tough duals and we’re finally showing our experience. I mean, we’re a new team and we’re young, but we’re finally getting there. We’re finally beating up on some people.”

The Mountaineers have just two more duals left in their rebirth season. They’ll host Washington State’s club team on Sunday in La Grande at 1 p.m., then wrestle at Southern Oregon on Feb. 4. The NAIA Western Regional Tournament will be held Feb. 18 in Redding, Calif.