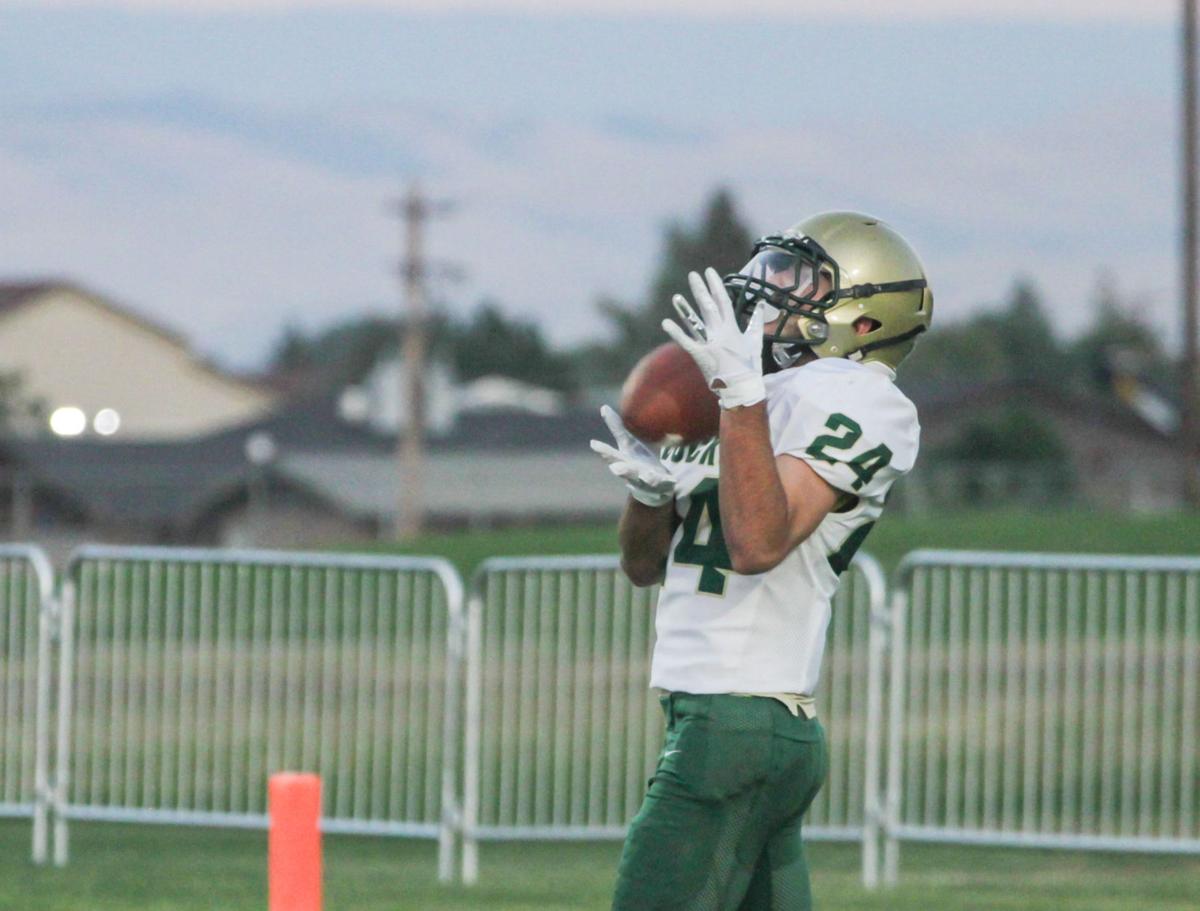 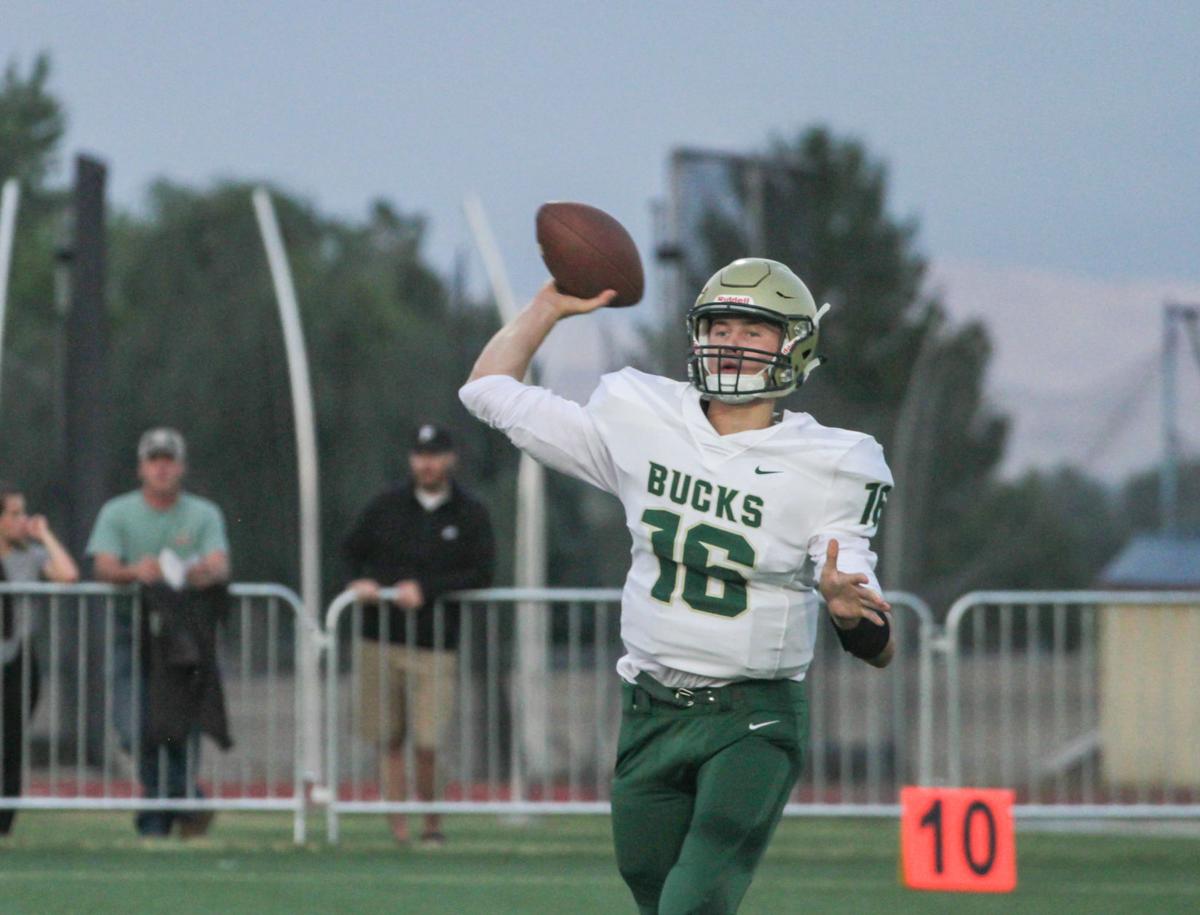 Pendleton quarterback Tanner Sweek delivers a pass during the first quarter of Friday’s game. Sweek threw for 161 yards in the Buckaroos 36-14 loss to the La Grande Tigers. 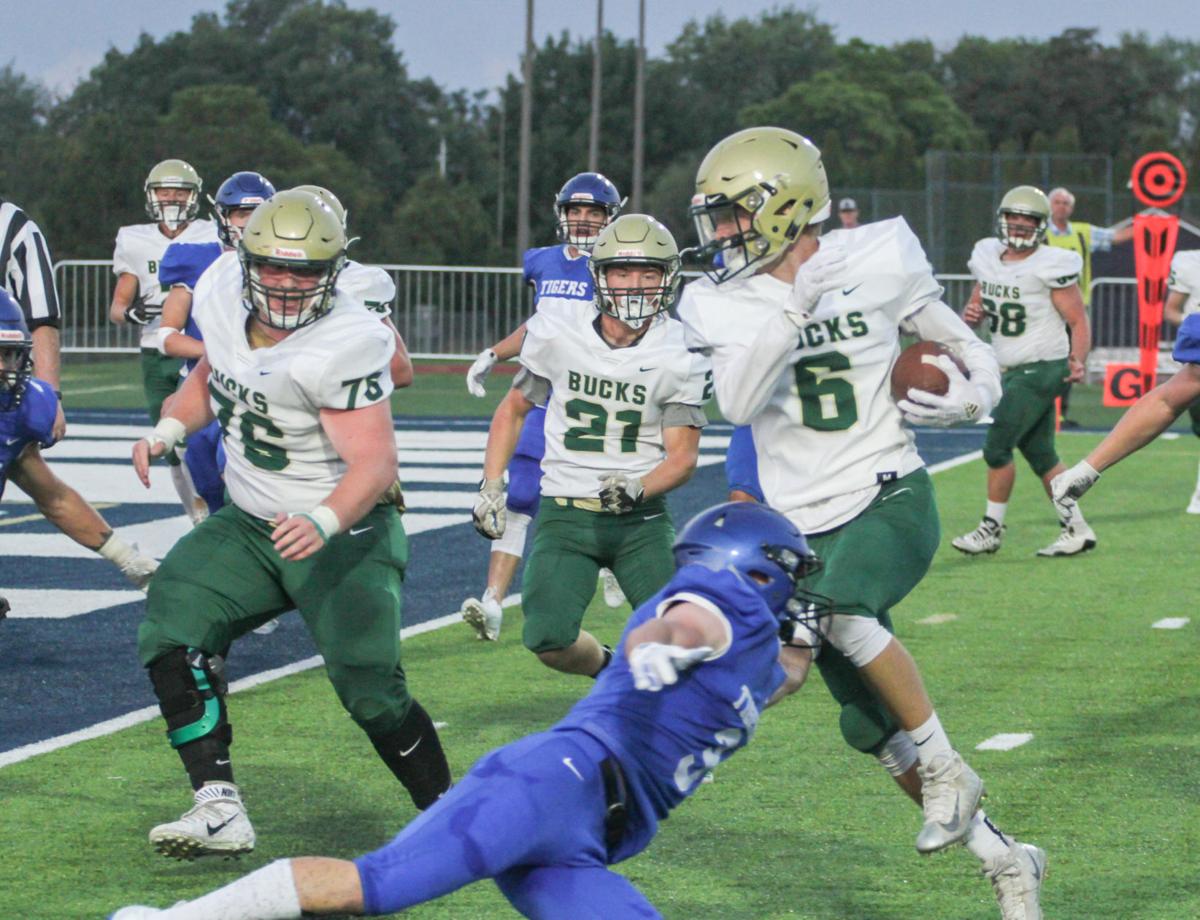 {span}Pendleton’s Mathias Patrick (6) makes a move near the goal line during the first quarter of Friday night’s game in La Grande. Patrick had 120 yards receiving and a touchdown in the Buckaroos’ 36-14 loss to the Tigers.{/span}

Pendleton quarterback Tanner Sweek delivers a pass during the first quarter of Friday’s game. Sweek threw for 161 yards in the Buckaroos 36-14 loss to the La Grande Tigers.

{span}Pendleton’s Mathias Patrick (6) makes a move near the goal line during the first quarter of Friday night’s game in La Grande. Patrick had 120 yards receiving and a touchdown in the Buckaroos’ 36-14 loss to the Tigers.{/span}

LA GRANDE — The La Grande Tigers got the best of the Pendleton Buckaroos for the second time in three years.

Parker Robinson threw for 248 yards and three touchdowns — two to Blaine Shaw — and Nathan Reed added 131 yards rushing and a score in La Grande’s 36-14 victory Friday night in the season opening game for both teams.

“We had opportunities, and I think we’ll go back and watch film and take a look at what we can do to get better. I think everything is fixable, and that’s always a positive,” Pendleton head coach Erik Davis said.

“We had two turnovers inside the red zone and a pick six. Those kill you. (If) you give a team like that extra opportunities on the offensive side it’s gonna be a long day for us, and we gave them that opportunity.”

The contest, as could be expected for a season opener, saw several turnovers by both teams.

It also saw a lot of yards churned out by La Grande, both on the ground and through the air. The Tigers racked up 430 yards of offense, and took advantage of extra opportunities given to it by Pendleton, which turned it over four times.

La Grande only needed three rushing plays to score on the first drive of the game, with Reed scoring from 59 yards out for a quick 7-0 lead a minute into the game.

Pendleton’s first points came from the defensive end, getting a safety and then briefly taking an 8-7 lead when Kason Broncheau scooped up a fumble and ran it in from 13 yards.

It was all La Grande from that point.

On the next offensive play, Robinson, who had fumbled the ball on Broncheau’s score, launched an 85-yard touchdown pass to Josh Zollman, then connected with Shaw in the second quarter for 43 yards on a jump ball that Shaw caught in front of the defender inside the 5-yard-line before walking in.

La Grande later collected its own defensive touchdown when Gabe Shukle nabbed an interception from Tanner Sweek and took it the other way 43 yards. A late Chris Woodworth field goal put La Grande well in front at the half, 29-8.

Sweek, who had 161 yards passing, got the Buckaroos on the board on offense in the third quarter on a 40-yard scoring pass to Mathias Patrick. The score brought Pendleton within 15 points, but that was as close as the Bucks got, as Robinson and Shaw hooked up for a 17-yard touchdown early in the fourth for the final margin.

“We had way too many mistakes, too many fumbles, too many turnovers,” Patrick, who had 120 yards receiving for the Buckaroos, said. “We definitely need to come together as a team because we lost so many seniors (and) that coherency isn’t there yet.”

Davis said the Buckaroos’ battle for the starting quarterback is still open. Sweek was 13-for-25 passing and added 35 yards rushing. Cooper Roberts 5-for-16 for 74 yards, but had minus-9 yards rushing. Both threw an interception.

“I think it’s still up there,” Davis said. “I think they both did some really good things, and I think there are some things they need to clean up as well as a whole.”

Pendleton’s primary source of offense was through the air as the two combined to pass for 235 yards. Walker Camp added 49 yards receiving to go along with Patrick’s big night.

The Bucks, though, managed just 33 yards rushing on 23 attempts as La Grande controlled the trenches. The Tigers countered with 182 rushing yards on 30 carries.

“The defensive line and offensive line played great tonight,” La Grande head coach Rich McIlmoil said. “We got some dudes that can straight up play.”

“Like I told the kids, were 0-0 in league and I think that is where our focus has to be right now,” Davis said.