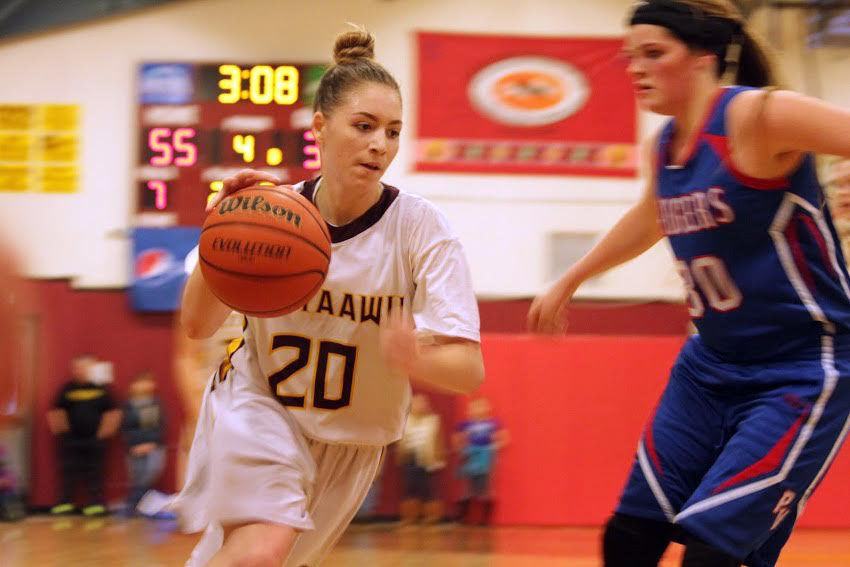 Staff photo by Eric Singer Nixyaawii's Kaitlynn Melton, No. 20, dribbles towards the basket during Nixyaawii's 61-43 win over Powder Valley on Saturday in Mission. 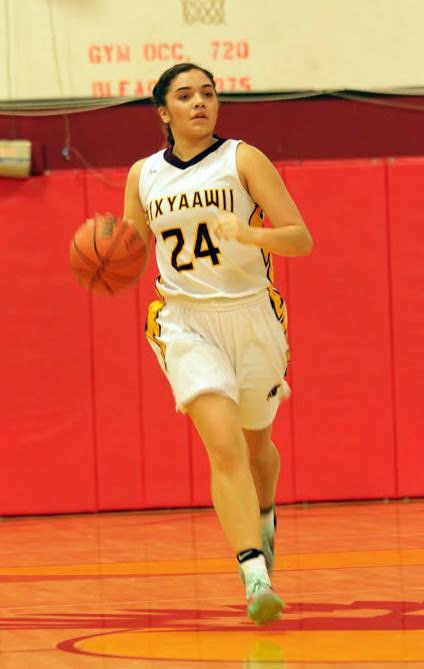 Staff photo by Eric Singer Nixyaawii's Milan Schimmel dribbles the ball up the court during Nixyaawii's 61-43 win against Powder Valley on Saturday in Mission.

Staff photo by Eric Singer Nixyaawii's Kaitlynn Melton, No. 20, dribbles towards the basket during Nixyaawii's 61-43 win over Powder Valley on Saturday in Mission.

Staff photo by Eric Singer Nixyaawii's Milan Schimmel dribbles the ball up the court during Nixyaawii's 61-43 win against Powder Valley on Saturday in Mission.

There was a lot riding on this game as both teams entered the day deadlocked at the top of the league standings with identical 7-0 records. Both teams knew what was at stake, but as the game was played it was obvious that one team wanted the win to stay unbeaten.

That team was Nixyaawii, as the Golden Eagles trampled the Badgers 61-43 to take over sole possession of first place in the OOL and remain a perfect 16-0 on the season.

“Our game plan coming was to attack the rim and I think we did a really good job of that,” Nixyaawii coach Jeremy Maddern said. “I think when we got going offensively, then our defense picked it up too and I think we just played a pretty complete game from start to finish.”

“It’s hard to simulate the type of length and athleticism we have,” Maddern said, “and I think it took them (Powder Valley) a while to get used to it.”

Powder Valley was able to find its footing as the first quarter went along and trailed by just five points at 16-11 at the end of the quarter. But after that point, Nixyaawii stepped hard on the gas pedal and pulled away from the Badgers before coasting to the win in the second half.

“Having good ball movement played a big factor for us,” Nixyaawii’s Stacy Fitzpatrick said. “We practiced hard and pushed eachother this week and we knew we couldn’t go easy.”

Milan Schimmel led Nixyaawii with a game-high 21 points and Mary Stewart pitched in 17 points, with 15 of those coming in the second half. Kaitlynn Melton also had a solid game for the Golden Eagles, evading early foul trouble to finish with 12 points. As a team, Nixyaawii shot 39 percent (22-56) from the floor, and only hit one 3-pointer on the night — one by Stewart from the right wing early in the third quarter. On the other side, Powder Valley shot a meager 26 percent (16-60) from the floor, and was led in scoring by Samantha Kerns with 17 points.

These two teams both face quick turnarounds, as the Golden Eagles and Badgers will re-convene on Tuesday evening in North Powder for a re-match. The game had originally been scheduled for Jan. 6, but it was postponed to Tuesday due to weather.

Fitzpatrick says that while she and her teammates would love to keep their unbeaten streak going, it has no affect on how they will prepare for Tuesday’s game.

“We just go into games calm and don’t get ahead ourselves,” Fitzpatrick says. “We just try to do our best and if we do, we know that we’re good and we know we can win.”