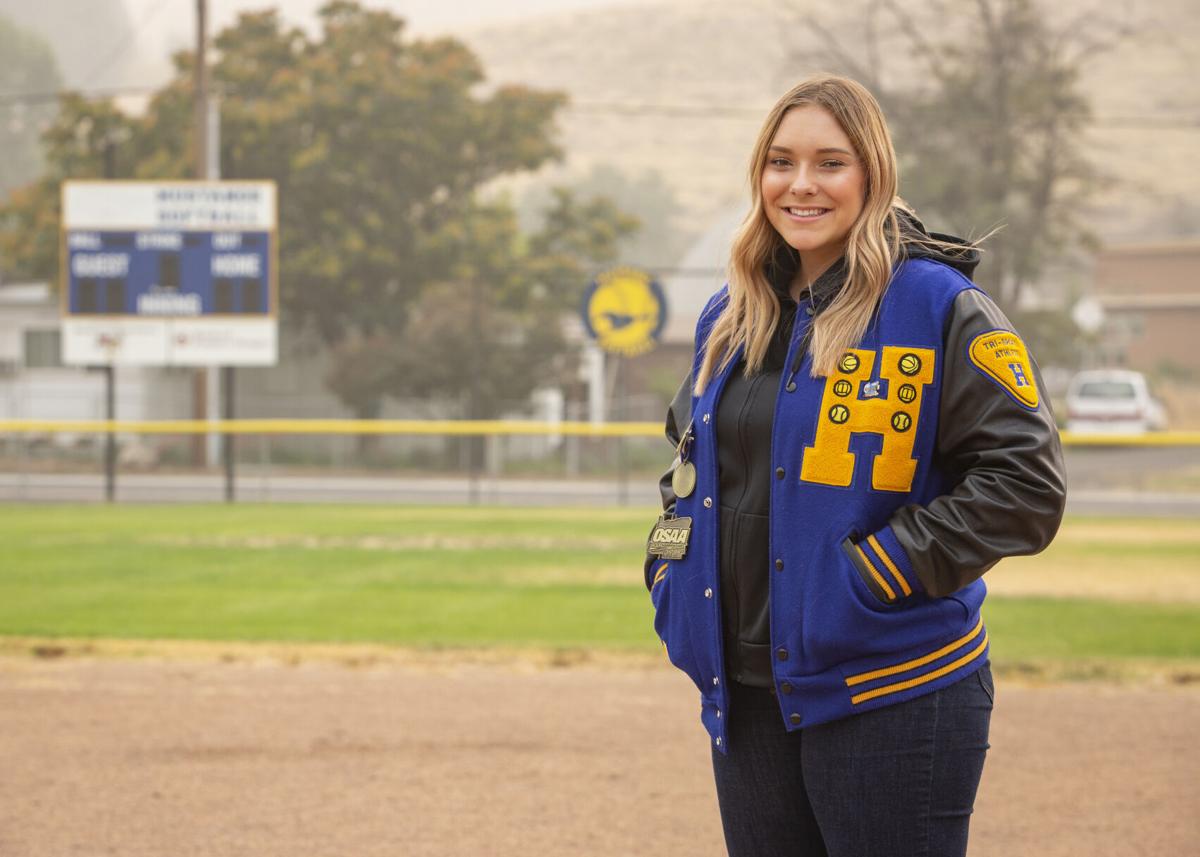 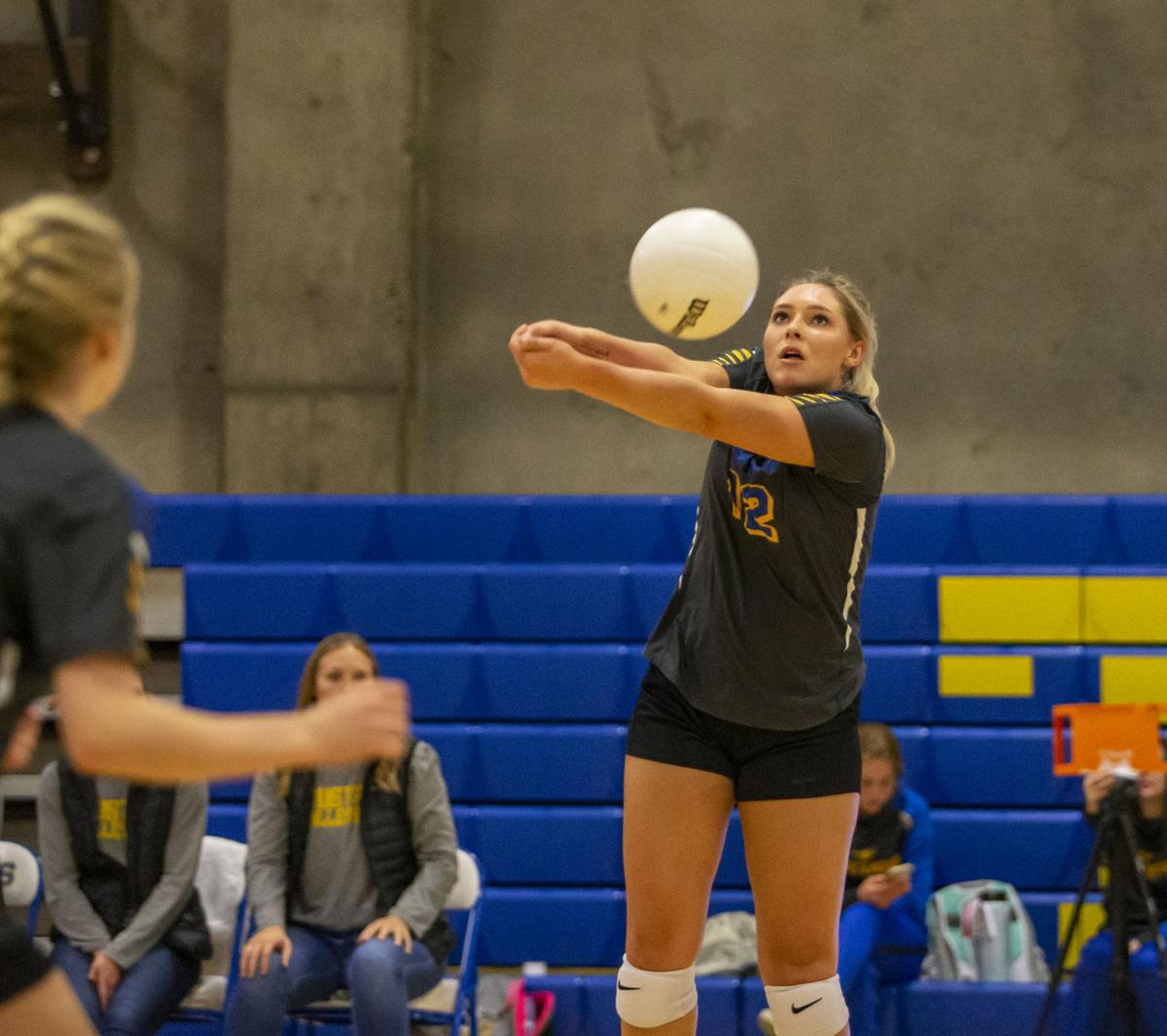 Heppner’s Sydney Wilson (12) hits a ball during the first set against the Stanfield Tigers during a game in Stanfield on Oct. 22, 2019.

Heppner’s Sydney Wilson (12) hits a ball during the first set against the Stanfield Tigers during a game in Stanfield on Oct. 22, 2019.

HEPPNER — Heppner volleyball and basketball coaches are used to hearing, “She hasn’t graduated yet?”

Opposing coaches are referring to Sydney Wilson, who for four years has terrorized the Blue Mountain Conference and dominated at the state level.

“She has been a rock,” said Mustangs volleyball coach Mindy Wilson, who also is Sydney’s mom. “I have been able to put her wherever and build around her. It’s bittersweet to see her graduate — I’m excited to see her move on, but I will miss her.”

Wilson won’t be going far. She signed a letter of intent on Friday, April 2, to play volleyball at Walla Walla Community College.

“We are excited to have her,” WWCC coach Chelsie Speer said. “I love getting the small-school kids to coach. They are gritty, hard-working kids.”

Wilson impressed Speer when she attended a tryout with the Warriors a few weeks ago.

“I felt like she fit in right away,” Speer said. “That is something you look for. She was coachable when we gave feedback. It’s great to have that in kids.”

Wilson had her sights set on college basketball a few months ago, but many teams didn’t have any openings because of COVID-19. Sophomores (at two-year schools) and seniors were given an opportunity to return for another year, and many chose to do so.

“I love them both, so either is great,” she said. “I’m very excited. It will be super fun to be able to continue to play after high school.”

Though this is a shortened season, Wilson has excelled on the court with her teammates. The Mustangs are 5-0 in BMC play, and 8-1 overall. They are on an eight-match win streak after dropping their season opener to Irrigon.

Because of COVID, there will not be any state championships this year.

“They don’t get anything out of it,” Mindy Wilson said. “We worked so hard for this year. This group of seniors has been playing together since the sixth grade. I’m not saying we’d win state, but we’d be at the tournament.”

Heppner will finish its season on Tuesday, April 6, at Stanfield. Wilson said it will be harder on her mom than her.

“We don’t talk about it,” Wilson said. “She’s been crying for a couple of weeks. It will be tough. I liked playing for my mom. She’s a great coach, and she’s tough on me, which is a good thing.”

Coach Wilson doesn’t deny the match on April 6 will be a tough night.

“It will be my last match with her,” she said. “I will continue to coach, but it will be different. It’s hard to be her coach and her mom.”

Wilson has had a stellar career for the Mustangs. The 5-foot-8 outside hitter/defensive specialist, who has started since she was a freshman, has 594 kills, 32 blocks and 1,594 digs to her credit. Her serve, which has a touch of the devil on it, has produced 240 aces.

“I can always count on her, not just hitting or digging the ball,” Mindy Wilson said. “She will get the ball. If it’s a crappy set, she will make sure it gets over the net. There is reliability and accountability — if it has to be done, she will get it done. She’s all about the team.”

Wilson is just as talented on the basketball court.

She was a key component when the Mustangs won the 2018 2A state title her sophomore year. That year, she was runner-up for 2A state Player of the Year.

In three seasons, Wilson has scored 1,305 points. She has scored in every high school game she has played.

Her senior year of basketball is still is up in the air, as indoor contact sports have not yet been approved by the state.

Because of the COVID pandemic, campus visits are limited, as are in-person tryouts.

Before she visited WWCC, Wilson made the trip to Pasco, Washington, to check out Columbia Basin College.

When she arrived, Hawks coach DiShondra Goree had Wilson on the court by herself. The tryout didn’t last long.

“I thought it was weird,” Wilson said. “She had me in for a tryout, but it was just me. She didn’t get to see how I would play with other girls and fight for a spot. She has never seen me play, but when she saw I was left-handed, she said she didn’t want me because I was left-handed. I thought the whole thing was unprofessional.”

A few weeks later, Wilson went to WWCC, and the experience was at the other end of the spectrum.

“Coach Speer introduced me to the coaches and players,” said Wilson, who wants to major in nursing. “I felt really comfortable and the girls welcomed me. It was a tryout I was hoping for. I did all the things you would do to earn a spot. I thought I actually did really well. I was nervous, but the more I was out there, I became more comfortable.”

Wilson said Speer has her tabbed as a libero, which is fine.

“She said she would work with me on my hitting from the right side to make me better in the front row,” Wilson said. “I’ll play where they need me to.”