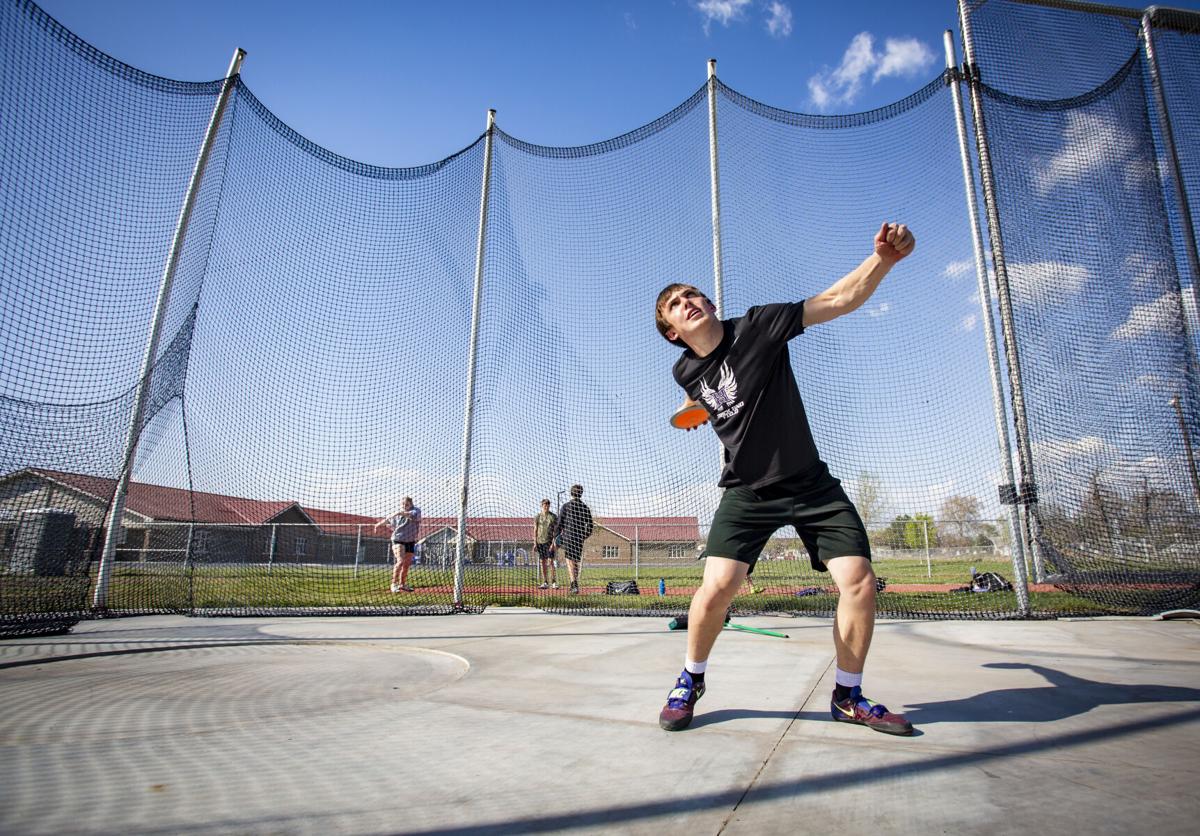 Hermiston’s Caden Hottman throws a discus during practice at Hermiston High School on Thursday, April 22, 2021. Hottman broke the school’s record in the discus with a throw of 178 feet to eclipse the previous school record of 169-2 that was set by Tre Neal on April 15, 2016. 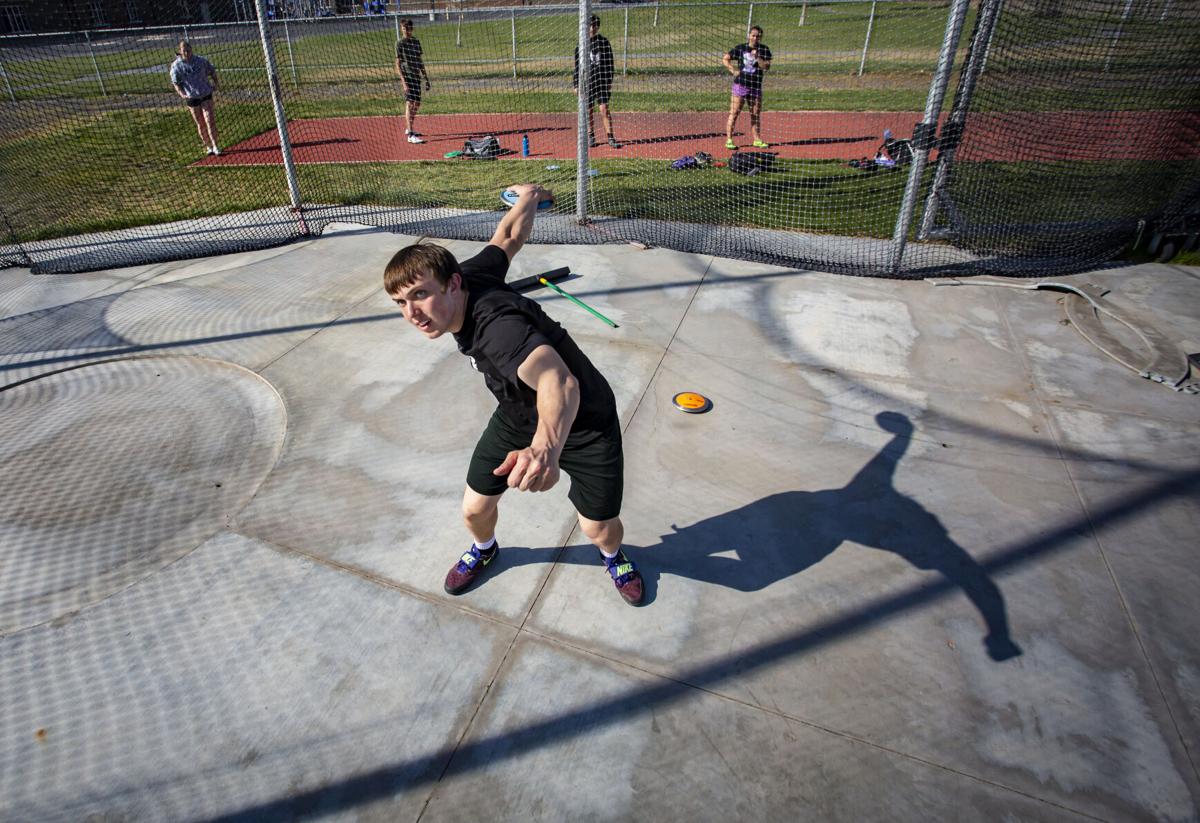 Hermiston’s Caden Hottman throws a discus during practice at Hermiston High School on Thursday, April 22, 2021. Hottman broke the school’s record in the discus with a throw of 178 feet to eclipse the previous school record of 169-2 that was set by Tre Neal on April 15, 2016.

Hermiston’s Caden Hottman needed just three high school track meets to eclipse the school record in the discus, powering a throw of 178 feet to move past Tre Neal’s mark of 169-2 that was set on April 15, 2016, at the Oregon Relays.

Hottman’s record came exactly five years to the day that Neal set his.

“It was surreal,” Hottman said of the record. “I knew I would eventually have a chance to get it, but I didn’t think it would be this soon.”

Then came his throw of 178 feet, which he hit at a Mid-Columbia Conference meet at Richland High School in Washington.

“I knew when it landed that it was a school record,” said Hottman, whose throw had surpassed the 170-foot line on the sector. “I just didn’t know by how much.”

Hermiston throws coach David Faaeteete said he is not surprised by Hottman’s performance.

“He’s put up pretty big numbers since he was in middle school,” Faaeteete said. “He came out his sophomore year and we were going to (do) big things, then COVID hit. He’s a coach’s dream. He likes to work hard, he is very technical, and he likes constructive criticism. He likes to be coached.”

If you are wondering where Hottman was his freshman year, one only needs to head to the baseball field.

“I have always loved baseball,” Hottman said. “I picked up track in middle school and quickly became really good at it. But if there was a choice between baseball or track, I would go to baseball.”

If not for an elbow injury in the seventh grade, Hottman may never have pursued track.

“To be honest, I didn’t really like track,” he said. “My seventh grade year I tore the UCL in my elbow and I didn’t know if I would be able to play baseball. I finally caved in.”

In the eighth grade, Hottman had the top throw in Oregon for middle school throwers, which got him wondering if maybe track was his future.

Baseball was back on his schedule his freshman year of high school, but he had a change of heart that summer.

“I did track in the summer (with the Tri-City Thunder) and it was fun,” Hottman said. “I went to nationals between my freshman and sophomore year. I finished like 26th, but it was a great experience.”

He had good intentions to be part of the track team his sophomore year, but the COVID-19 pandemic washed the season away.

“It came to a point where I was going to hit the next level in throwing and I had to make a decision,” he said.

While Hottman excels at the discus, he’s not as proficient at the shot put.

“It’s growing on me,” he said. “Me and Ryker McDonald compete against each other. I’ve had to step up my game to one-up him. It’s a weekly feud.”

“He’s never been a big shot put guy until this year,” Faaeteete said. “He’s just not connecting with the shot put like the discus. He doesn’t have the timing down yet. If we can get him connected with his feet, he could go 55 feet.”

While baseball was his first love, Hottman’s dad, Gavin, was a track guy.

Gavin Hottman threw the shot put and discus at Kalama High School in Washington, and at Eastern Oregon University.

Gavin Hottman is ranked fifth on the Mountaineers’ all-time list for discus throws with a mark of 158-3, set in 1997.

“My dad set the base of my throwing,” Hottman said. “I knew if I went out for track (at Hermiston) that I would have really good coaches. They are an extra set of eyes, and they see things differently than my dad. Coach (Emilee) Strot and Coach Faaeteete see specific things I needed to work on, and that has helped set up big throws.”

Hottman also puts in a ton of time in the weight room, which has helped his throwing.

“I love to lift,” he said. “It gives you a lot of adrenaline, and you get to try and out lift your friends. It’s fun to be in the weight room, especially if Faaeteete is there. It makes you want to be there at 6 in the morning. Coach Faaeteete is a different animal. He knows his stuff and is relatable with athletes.”