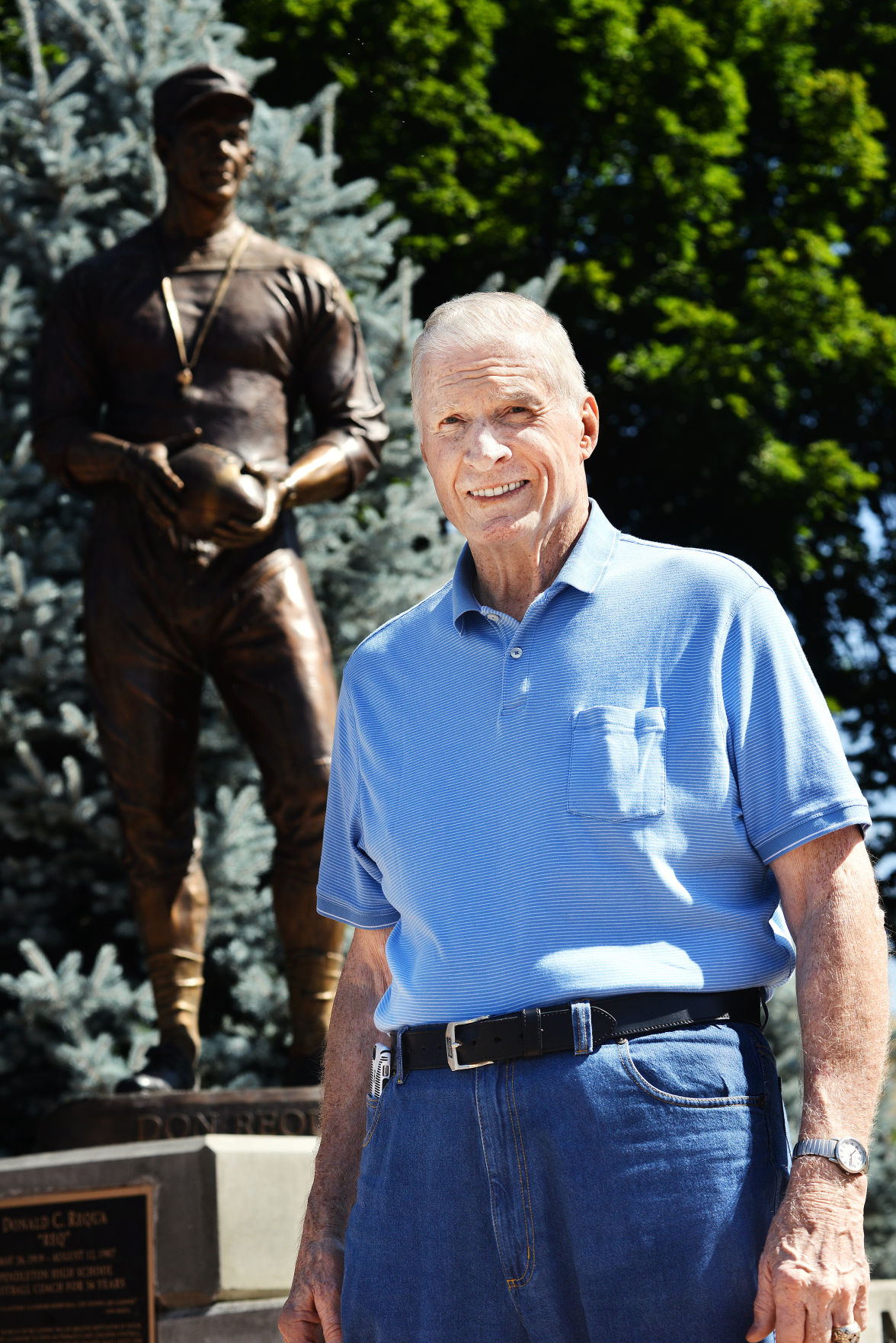 Staff photo by E.J. Harris Pendleton football legion Bob Lilly stands in front of the Don Requa statue in Brownfield Park in Pendleton. Lilly played football under Requa at Pendleton High School before going to college and then having a fourteen-year career with the Dallas Cowboys. 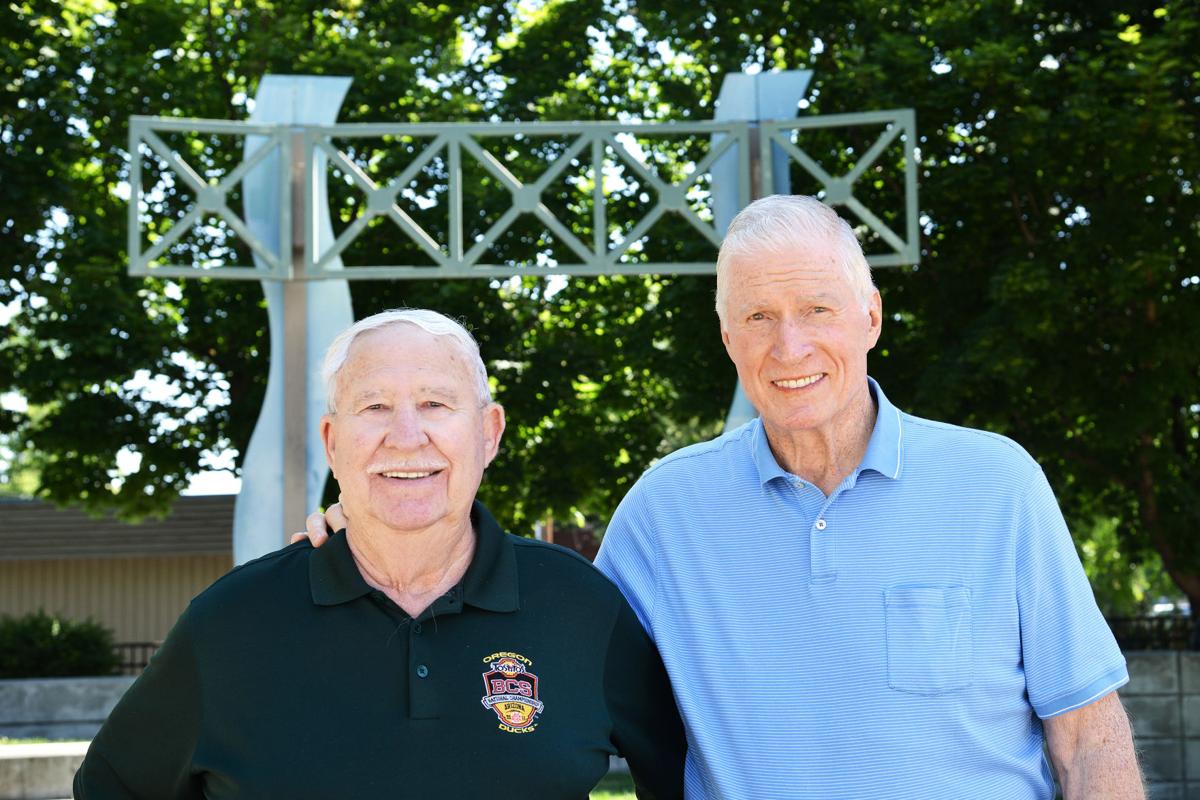 Staff photo by E.J. Harris Bob Lilly, right, stands with his friend Tex Aylor at Brownfield Park in Pendleton. Lilly is in town to attend Aylor's induction into the Pendleton Linebackers Club Hall of Fame.

Staff photo by E.J. Harris Pendleton football legion Bob Lilly stands in front of the Don Requa statue in Brownfield Park in Pendleton. Lilly played football under Requa at Pendleton High School before going to college and then having a fourteen-year career with the Dallas Cowboys.

Staff photo by E.J. Harris Bob Lilly, right, stands with his friend Tex Aylor at Brownfield Park in Pendleton. Lilly is in town to attend Aylor's induction into the Pendleton Linebackers Club Hall of Fame.

PENDLETON — Bob Lilly remembers the day he moved to Eastern Oregon quite vividly.

After moving up from a small town in Texas, Lilly and his family made the drive in the summer of 1956, coming into Pendleton just after Independence Day that year. Once reaching the Oregon border, the family drove through Baker City, La Grande and up through the Blue Mountains before finally coming through the clearing on the Old Emigrant Highway and giving the Lilly’s their first sight of the area.

“You come through the mountains, through the trees,” Lilly recalled in a recent sit-down interview with the East Oregonian, “and then all the sudden you drop down and see all the golden levels upon levels of wheat fields and it was just breathtaking. I thought I was in heaven.”

The family was forced to move away from their home in Throckmorton, Texas, located approximately 160 miles northwest of Dallas, because of a decade-long drought that had severely hurt the state’s economy. After calling around to various extended family members, Lilly’s mother’s cousin was working as an electrician on the McNary Dam outside of Hermiston and was able to help Lilly’s father land a job on the Dam.

“So we packed everything up and left,” Lilly said.

Their original destination in Eastern Oregon, though, was actually in Hermiston so they could live close to the Dam. But after only two weeks there, Lilly’s father had a minor heart episode and could no longer work on the Dam. Not long after, though, his father got a job as a mechanic at the Buick car dealership in Pendleton and the family decided to move east.

It was at that time when Lilly had his first interaction with legendary Pendleton football coach Don Requa. Prior to the family moving to Pendleton, Requa had heard about the tall lineman that was going to join his football team and “probably wanted to come size me up,” Lilly said.

After graduating from Pendleton High School in 1957, Lilly started on a path that took him on a well-known journey to becoming one of the greatest football players in college and professional history.

At TCU, he became an All-American offensive and defensive lineman as a senior in 1960 and was projected as one of the top draft picks in the National Football League and American Football League.

The NFL’s Dallas Cowboys drafted Lilly 13th overall in the first round of the 1961 draft as the club’s first-ever draft selection, and then AFL’s Dallas Texans picked Lilly in the second round of its draft. For a Texas-born player like Lilly, being drafted by two Dallas teams was a dream come true, but also presented a tough decision.

“Here are the Cowboys with Coach (Tom) Landry and the Texans with Coach (Hank) Stram and I had a hard time making a decision between the two,” Lilly said. “I asked (TCU head coach Abe Martin) and he said ‘Only advice I can give you is the NFL has been around for a long time and several other leagues have come and gone … I think I would go with the NFL,’ which is why I picked the Cowboys.”

The decision worked out for Lilly, as he spent the next 14 seasons terrorizing opposing offenses as a defensive lineman for the Cowboys. Lilly was an eight-time all-NFL selection, an 11-time Pro Bowler and helped the Cowboys win Super Bowl VI (and he now wears hid Super Bowl champion ring as his wedding band).

His play for the Cowboys earned him a spot as the team’s first-ever inductee into their Ring of Honor in 1975 as well as the title of ‘Mr. Cowboy.’ Five years later, Lilly was inducted into the Pro Football Hall of Fame in his first year of eligibility and then later was named to the All-Century NFL Team by The Sporting News in 2000, cementing his spot as one of the greatest football players in history.

And Lilly said he could have never imagined his life playing out the way it did when he moved to Pendleton more than 60 years ago.

“I was shocked when I got a scholarship to college,” Lilly joked. “I was really shocked when I got drafted by the Cowboys and Texans. And then it never even entered my mind at the time that anybody but quarterbacks and running backs got into the Hall of Fame so I remember when they called me up I was like ‘What? I did what? I got what?’

“But it’s all been a blessing.”

Along with the blessing of a successful football career, Lilly knows he was blessed to be taught the game by two tremendous football coaches in Requa and the Hall of Famer Landry.

After his football career was over, Lilly immersed himself further into the world of photography. He became intrigued by the field since being selected to the All-American team in college, which was sponsored by Kodak, which came with his own 35mm camera. Since then he has dabbled with many different brands including Nikon, Leica, Canon and Hasselblad, and focuses on landscape photography.

“I like wheat fields and barns, especially,” Lilly said.

One of his favorite photos ever taken actually came from the Pendleton area, on Oregon Route 37 on a drive into town from the Hermiston area.

“I remember going through the bends in the road and all the creeks, streams that come out of little hills and farm here and there,” Lilly recalled. “But we came upon a schoolhouse about 30 years ago and I shot it on film. It had an old Chevrolet pickup rusted out in front of it and had some willow trees behind it and a wheat field behind it. It’s just really neat.”

Lilly, now 77, has made frequent trips back to Pendleton since departing for college in the late 1950s. Lilly and his wife usually make the drive from Texas and come back to Oregon for nearly every class reunion and Linebacker’s Club Hall of Fame ceremonies and to visit with friends throughout the Northwest.

For a professional landscape photographer like him, the Northwest is filled with phenomenal photo opportunities.

“It’s so different and varied here,” Lilly said. “Here, I love the plains and being able to see a long way. Then you go right up into the mountains, or go up the Columbia River towards Portland and it’s just beautiful.”

Lilly said that he and his wife considered moving back to Oregon in retirement, but decided with four kids, 12 grandchildren and soon-to-be three great-grandchildren in Texas made it easy to stay. Lilly is back in town this year for another class reunion as well as this year’s Linebacker’s Club ceremonies to support former teammate and current good friend Tex Aylor who is being inducted on Friday.

“I’m extremely proud to be in this Hall of Fame and I’m proud my friend Tex is getting in now,” Lilly said. “I was only here one year, and had a pretty good year but most towns if you hadn’t grown up there or lived there for a long time they wouldn’t put you in the Hall of Fame. So it’s a great honor and I’m very proud of it.”

And while Lilly’s time in Pendleton isn’t much more than a blip on his timeline now after spending the bulk of his 77 years in Texas, he is proud of his Pendleton roots and looks forward to many more trips in the coming years.

“I’ve never forgotten Pendleton,” he said. “Coming here was like going to the big city compared to where I lived and it’s always wonderful coming back.”