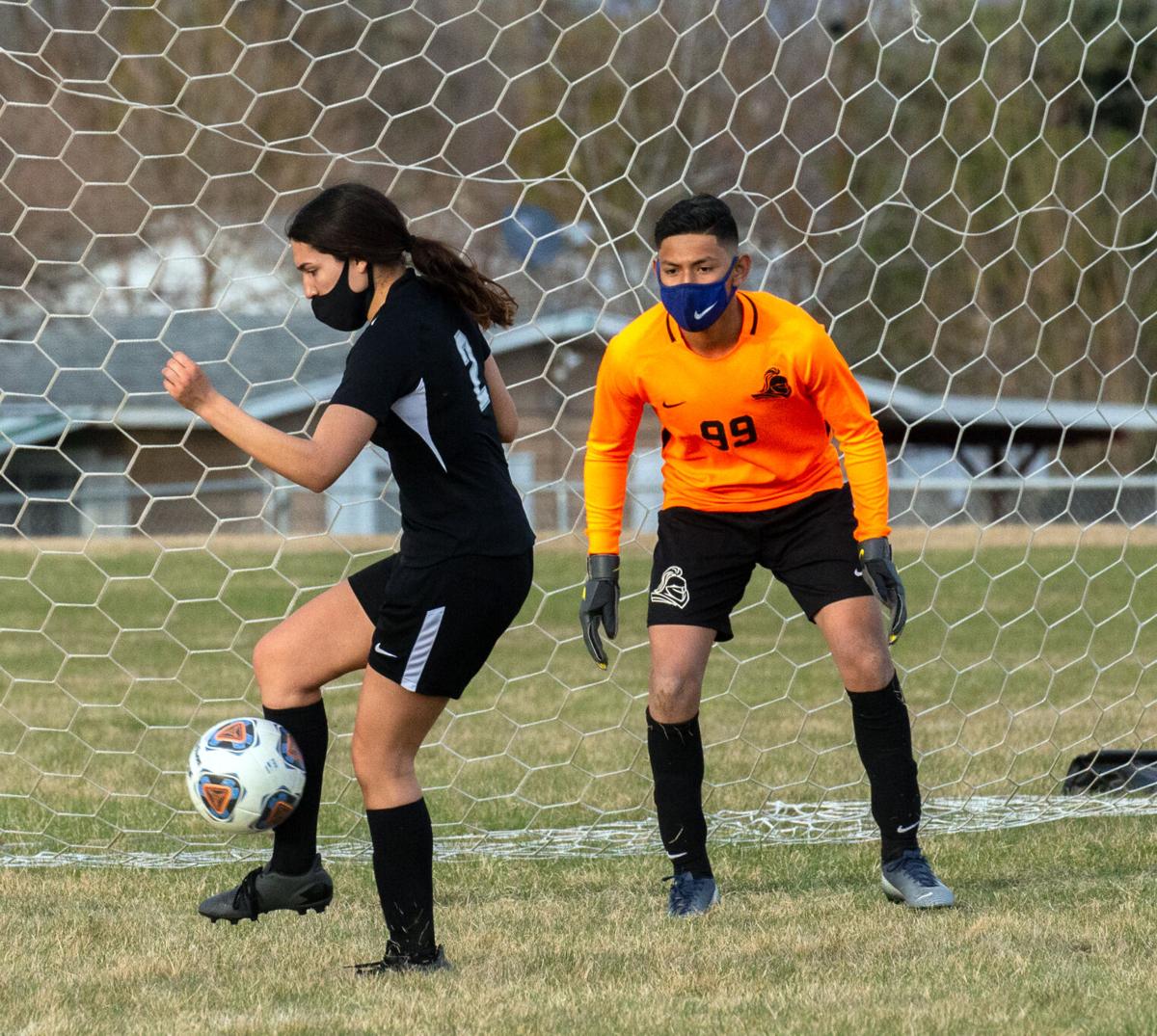 Irrigon’s Brianna Perez kicks the ball away from goal as Irrigon goalie Anthony Standley looks on during a home game on Thursday, April 1, 2021. 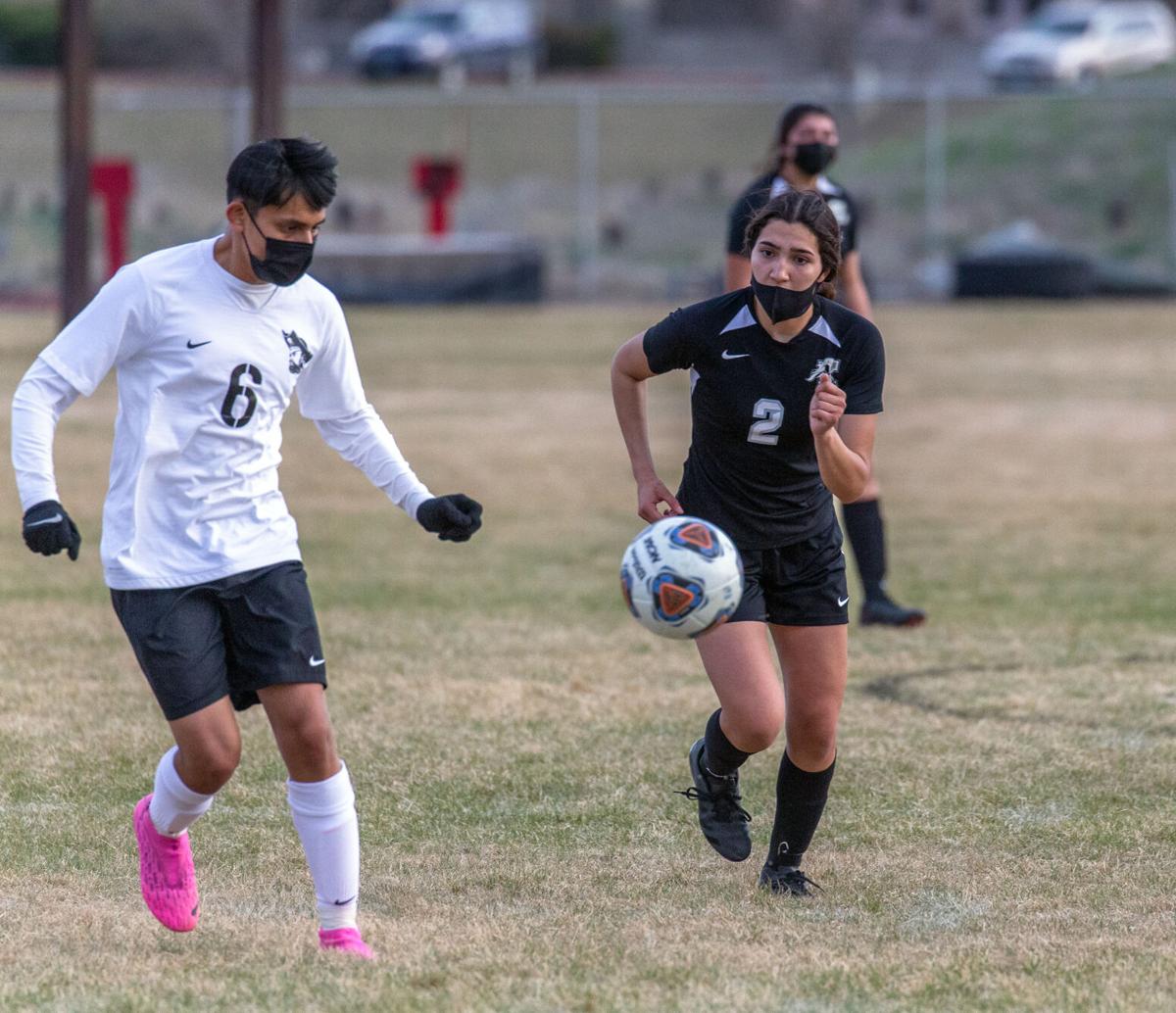 Irrigon’s Brianna Perez makes a beeline for the ball to head off Trinidad Mendoza, of Riverside, during a home game on Thursday, April 1, 2021.

Irrigon’s Brianna Perez kicks the ball away from goal as Irrigon goalie Anthony Standley looks on during a home game on Thursday, April 1, 2021.

Irrigon’s Brianna Perez makes a beeline for the ball to head off Trinidad Mendoza, of Riverside, during a home game on Thursday, April 1, 2021.

IRRIGON — Soccer has been a part of Brianna Perez’s life since the day she was born.

Her mom, Gabriela Perez, was a goaltender at Hermiston High School, and played recreational soccer for years after she graduated.

Perez started playing soccer when she was 4 years old, taking a cue from her mom and playing goalie. When she got to middle school, she switched to midfielder/defender so the team could take advantage of her speed.

This season, Perez is playing defender for the Irrigon boys team, as there weren’t enough girls for their own team.

“I honestly never saw myself playing college soccer,” Perez said. “I never thought I was good enough. This is life changing.”

“She is fairly adaptable when it comes to playing midfield or defender,” he said. “She has a good work ethic and she is talented. She is a diamond in the rough — I will take those players. We are getting the right players to come in.”

Irrigon had a girls team the past three years, but this year, only four girls showed interest. They were given the opportunity to play on the boys team, which they took advantage of this season.

“A lot of girls were seniors last year,” said Perez, who also plays basketball and track. “There weren’t many girls left.”

Perez said she enjoys playing on the boys team. She’s a starting left side defender for the Knights.

“The speed of the game is faster, there are quicker touches, and the boys are more physical,” Perez said. “Some guys try to body me, but that’s where improvement comes from.”

The Knights (0-7) didn’t win a game this season, but that didn’t deter Hillmick from bringing Perez aboard.

“I am super excited to see what she can do,” he said. “I think she will be absolutely fantastic.”

Perez wasn’t the only one excited about her playing college soccer.

An honor student, Perez plans to major in education, with a goal of teaching elementary or middle school students.

Gabriela Perez coached her daughter from the time she first put on soccer cleats until middle school. In return, Brianna watched her mom play, learning the game from the sidelines.

“I would go watch her play,” Perez said of her mom. “She was really good. She’s played her whole life.”

When Irrigon announced there would be no girls team this year, Gabriela had no problem with her daughter playing on the boy’s team.

“She thought it was an awesome idea,” Perez said. “She said it was a good way to improve my game.”

While mom and daughter have honed their skills, it’s Perez’s little brother Ethan who could be the best of them all.