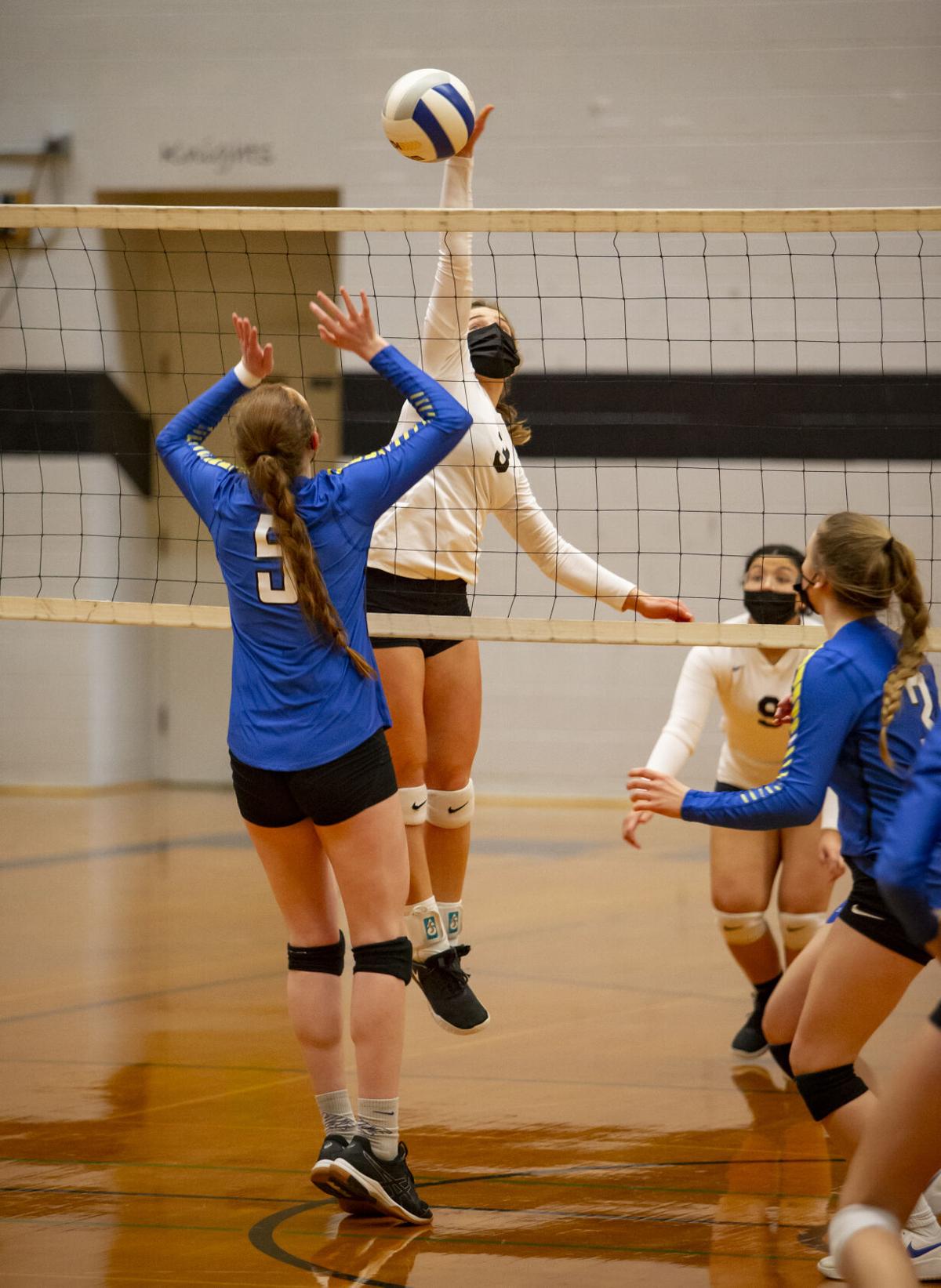 Irrigon's Emma Mueller (3) tips the ball over the net during a 3-0 win over the Stanfield Tigers at Irrigon High School on March 9, 2021. 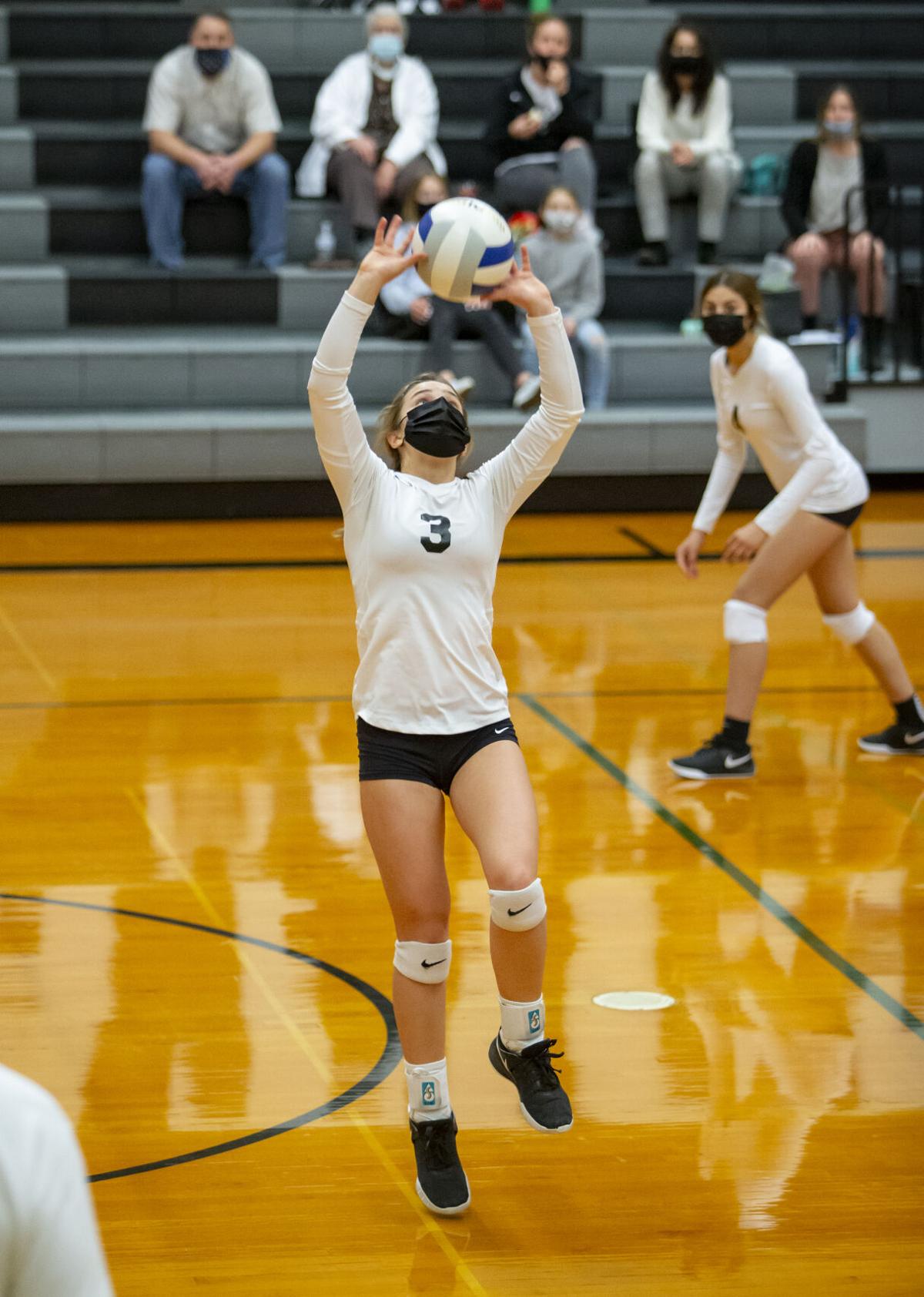 Irrigon’s Emma Mueller (3) sets the ball during a 3-0 win over the Stanfield Tigers at Irrigon High School on March 9, 2021.

Irrigon's Emma Mueller (3) tips the ball over the net during a 3-0 win over the Stanfield Tigers at Irrigon High School on March 9, 2021.

Irrigon’s Emma Mueller (3) sets the ball during a 3-0 win over the Stanfield Tigers at Irrigon High School on March 9, 2021.

IRRIGON — When Emma Mueller decided she wanted to play college volleyball, she was determined to stay in Oregon, pay in-state tuition and be closer to home.

A year later, the Irrigon senior has signed to play at Notre Dame of Maryland University in Baltimore — about as far away from home as she can possibly get.

Mueller connected with a recruiter online, who helped put her in touch with coaches throughout the country. That’s how she found Notre Dame of Maryland University.

“I went on a visit in February, and here we are today,” said Mueller, who is a setter. “I’m excited to do this for myself. My goal was to have new experiences, learn from new experiences and meet new people.”

NDMU is Maryland’s only women’s college — one of only 33 in the United States. While that was intriguing to Mueller, it did not deter her.

“That was never a big thing to me,” she said. “I thought it was interesting. I’d never heard of an all-girls college. As I started talking to the volleyball girls and others at the college, they said how they liked how they could speak freely, dress how they want, and express themselves more. Hearing about their experiences, I thought it would be a good fit.”

The Gators compete in the Colonial States Athletic Conference and have won the past two conference titles. They compete at the NCAA Division III level.

The NDMU campus is close to Baltimore Harbor, and the city is full of museums, monuments, sporting events and was named one of the top 10 U.S. cities for food lovers.

“There really is a lot to do,” Mueller said.

Mueller plans to major in nursing, and would like to work in a Neonatal Intensive Care Unit with babies.

NDMU has a state-of-the-art facility equipped with computer-powered human simulator mannequins, allowing students to practice nursing skills in a realistic and risk-free environment.

Mueller, who is Irrigon’s co-valedictorian for the Class of 2021 with Alyssa Luna, has received a presidential scholarship from NDMU, which will cover her tuition for four years.

“I still can’t believe I got that,” Mueller said.

A life of volleyball

Mueller has been playing volleyball since she was in the fourth grade. She has always been a setter, but it took her a while to master her craft.

“At first, I wasn’t very good at it,” she said. “But after I quit growing (she is 5-6), I realized it was either setting or being a defensive specialist.”

Her love of the sport grew when she started playing club volleyball for Club Gold out of the Tri-Cities in Washington with her good friend Makenna Collins, who recently signed to play at Eastern Washington University.

“That ignited the spark,” Mueller said of club volleyball. “I’m ever thankful for club and the opportunities it has given me. I have gotten to play against some of the best players in the country. Our families are best friends. This will be an adjustment for them.”

Irrigon competes in the tough 3A Eastern Oregon League with the likes of Burns, Nyssa and Vale. Mueller was an honorable mention selection as a sophomore, and a first-team setter as a junior.

The Knights advanced to the 3A state tournament in 2018 for the first time in school history. They lost in the first round to South Umpqua and finished the season with a 14-10 record.

Last year, the Knights (15-13) fell short of the state tournament with a loss to Burns at the district tournament.

“I’m thankful I grew up in a small town,” Mueller said. “You have to learn how to work and make your own games. Being on a farm helped form me as the person I am today, but I’m excited for a change of scenery.”