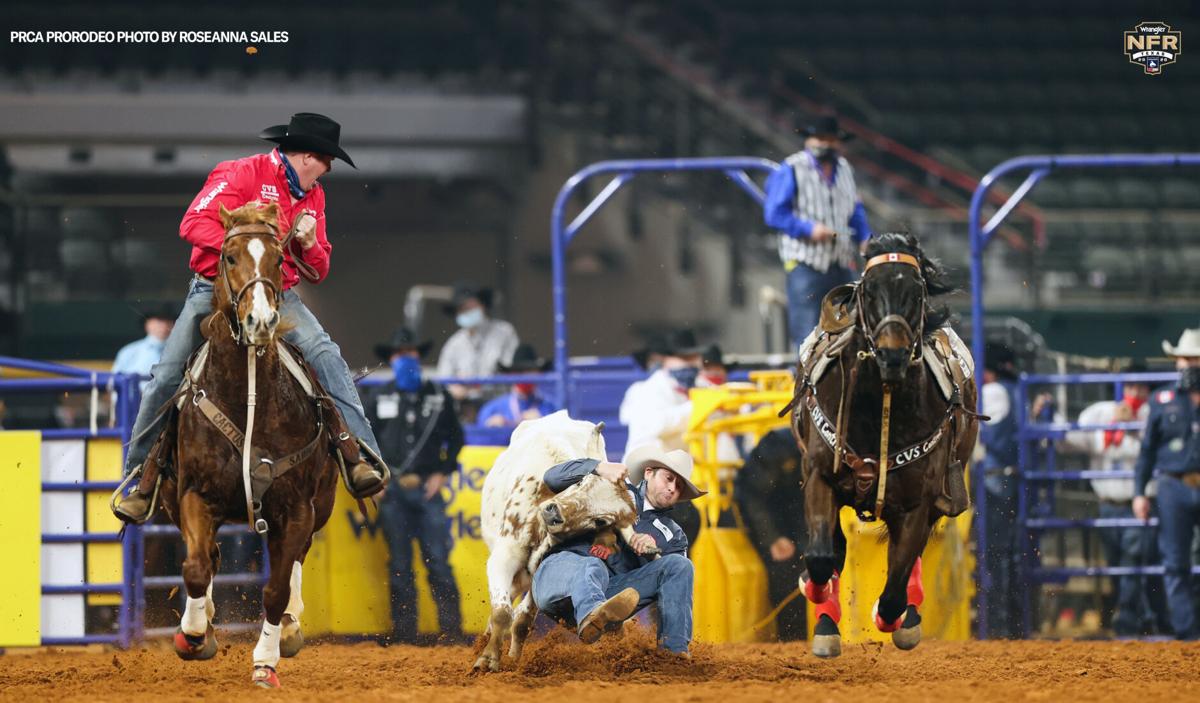 Heppner’s Blake Knowles drops down on to his steer during Round 8 of the Wrangler National Finals Rodeo on Thursday, Dec. 10, 2020, in Arlington, Texas. Knowles won the round with a run of 3.6 seconds. 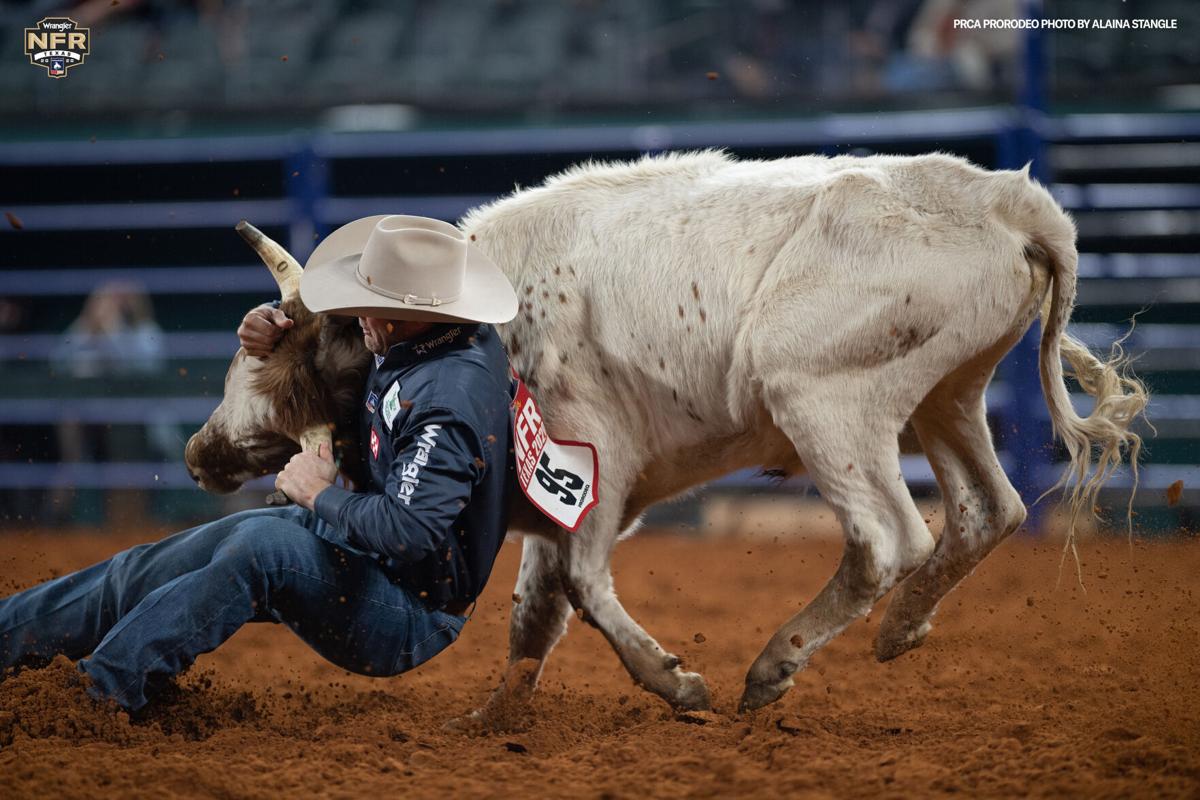 Heppner’s Blake Knowles prepares to turn his steer in Round 8 of the Wrangler National Finals Rodeo on Dec. 10, 2020, in Arlington, Texas. Knowles won the round with a run of 3.6 seconds.

Heppner’s Blake Knowles drops down on to his steer during Round 8 of the Wrangler National Finals Rodeo on Thursday, Dec. 10, 2020, in Arlington, Texas. Knowles won the round with a run of 3.6 seconds.

Heppner’s Blake Knowles prepares to turn his steer in Round 8 of the Wrangler National Finals Rodeo on Dec. 10, 2020, in Arlington, Texas. Knowles won the round with a run of 3.6 seconds.

ARLINGTON, Texas — Blake Knowles won his second round in the steer wrestling on Thursday, Dec. 10, at the Wrangler National Finals Rodeo, recording a run of 3.6 seconds in Round 8 at Globe Life Field.

The Heppner cowboy was the ninth man out of the gate, and his time on the white and brown steer was one-tenth of a second faster than Tanner Brunner, who was two men behind Knowles.

“That was a steer they struggled on the first two times,” Knowles said. “Earlier, when (Jacob) Talley had him, there was a freak thing, and Jesse (Brown) had some bad luck. I knew of that steer from earlier this summer and they won good money on him.”

It’s the second round win for Knowles, who split first on opening night. The winners get a buckle in addition to earnings.

“To be honest, I never thought a lot about it,” Knowles said of winning a second buckle. “I’ve done well here. For whatever reason, it’s working. I’m not going to question it.”

Knowles, who split sixth place in Round 7 with Talley and Tyler Waguespack with a time of 4 seconds, said the times are as fast as they have ever been.

“The littlest problem can cost you,” he said. “I don’t wish bad luck on anyone, but if someone stubs their toe, hopefully I can take advantage. You have to draw a chance, and you have to maximize it.”

Knowles tied for first in the opening round, and has placed in four of eight rounds — a personal best.

“I messed up in Round 4,” said Knowles, whose black steer slipped away from him. “I can’t get that round back. I am proud of what I’ve done here.”

Knowles has two more rounds to earn money, but he’s sitting 11th in the average. The top eight men in the average earn bonus money.

“That aggregate money is so important,” Knowles said. “In the end, you throw a steer and $40,000 appears. You have to produce every night if you want that bonus.”

In the timed events, a fraction of a second can earn or cost you thousands of dollars. The top man in the steer wrestling average earns an extra $67,269, while the eighth man gets $6,346.

“Steer wrestling is the deepest talent you will see in rodeo,” Knowles said. “From 45 to 1, everyone is talented. Then you break it down to 15 (for the NFR), and you have no room to not do the fundamentals correctly.”

It takes a village

Knowles has had the good fortune to ride Curtis Cassidy’s horse, Tyson, voted the 2020 steer wrestling horse of the year.

“He has been awesome,” Knowles said. “It puts pressure on you to produce. He backs up in the box and is ready before I am. He is going to give you a chance every night, no matter what.”

Canadian cowboy Tanner Milan has been hazing for Knowles at the NFR.

“He hasn’t been noticed a lot, which means you are doing your job,” Knowles said of Milan. “We have been rodeoing together for a long time. He has been great.”